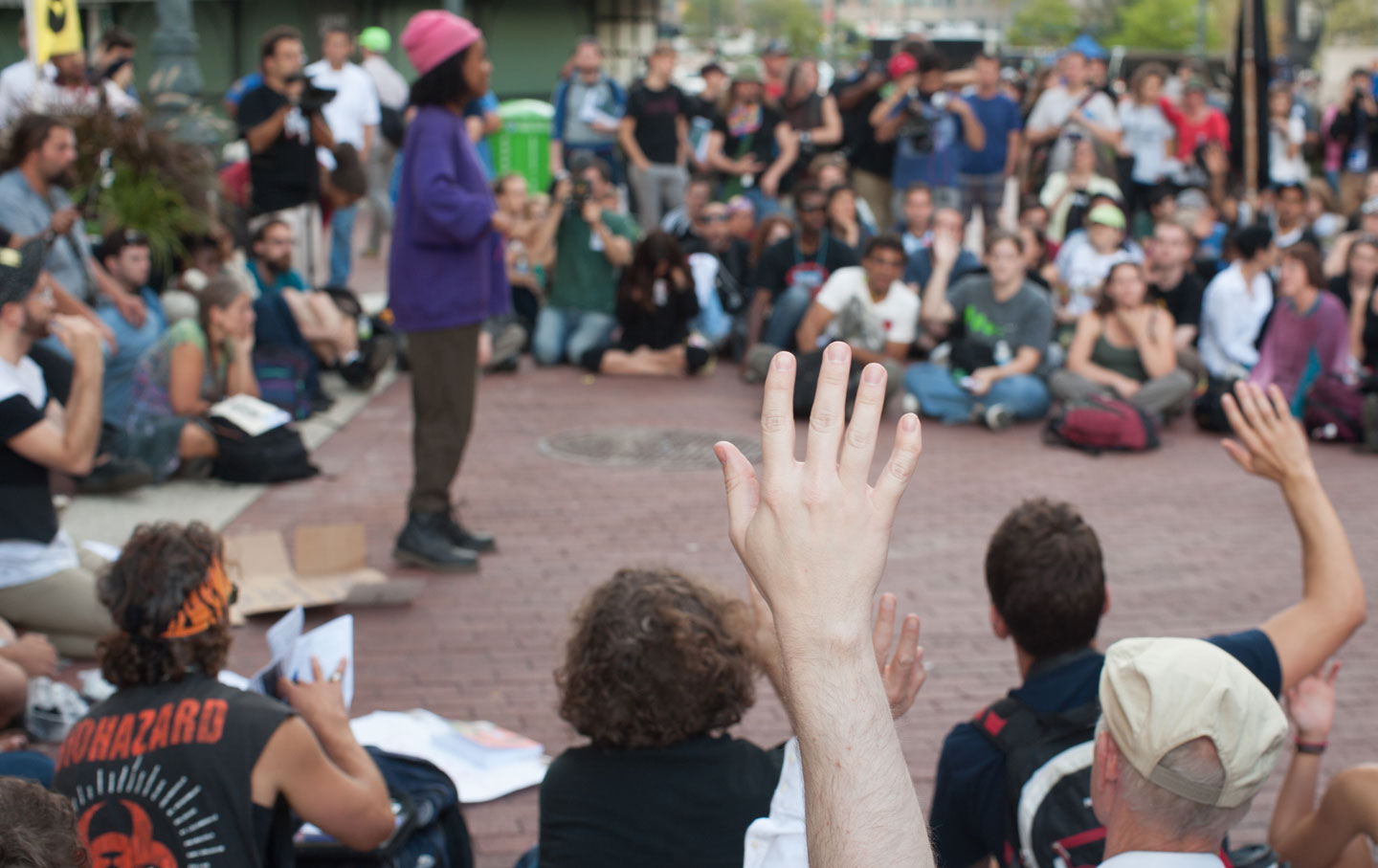 Occupy Wall Street Protesters prepare for the one year anniversary of the movement in Zuccotti Park. (Shutterstock / gabriel12)

In the 1980 election, Jimmy Carter carried West Virginia against Ronald Reagan—one of six states that went Democratic in the Republican landslide. This year, the state voted 69 percent for Trump. The “fighting 9th” Congressional District on the Virginia–West Virginia border was the only rural county in Virginia that went Democratic in 1980. In 2016, more than 75 percent voted Trump.

Dudley Cocke, founder of the Appalachian community-based Roadside Theater in Virginia’s 9th District, points out that among different reasons, “among the most decisive was the loss of the United Mine Workers in the late 1980s as a center for political analysis and continuing community education.”

Theda Skocpol makes a similar argument, pointing to Trump’s huge margins in rural areas, small towns, and some exurban areas. In such areas, she argues, unions of all kinds have been decimated. She also points to the fragmentation along issue lines and the professional domination of many urban groups.

In American history, infrastructure for progressive election campaigns has rarely been produced by electoral organizing. As the late Robert Bellah put it, “political parties [in America] often come in on the coattails of successful popular movements rather than leading them.”

At best, union halls were what Cocke calls “democracy’s classrooms.” There are many other such classrooms, what Sara Evans and I call “free spaces.” We found these at the center of democratic movements, from 19th-century women’s associations that became foundations of women’s suffrage and the farmers’ cooperatives that birthed the Populist Party, to the citizenship schools, beauty parlors and congregations of the civil-rights movement. These fed “democratic experience that is far more than periodic voting,” as Vincent Harding, friend and sometimes speechwriter for Dr. Martin Luther King Jr. described the civil-rights movement.

In free spaces citizens learn political skills. They build civic relationships across divisions like race, class, faith, and partisanship. They develop public confidence. They grow public imaginations beyond group identities and specific issues. The citizenship schools are a powerful example. From 1955 to 1968, 800 citizenship schools taught almost 30,000 grassroots leaders literacy, nonviolence, community organizing, and history. Septima Clark, their architect, said the purpose of the schools was “broadening the scope of democracy to include everyone and deepening the concept to include every relationship.”

Free spaces also build infrastructure to challenge demagogues like Donald Trump, who threaten not only to implement authoritarian policies but also to privatize common things.

So what can create free spaces? One key strategy is building the movement to revitalize civic purposes of schools and colleges. Here are three elements.

Organizing efforts around strengthening civic purposes of education will likely accelerate in the face of privatizing threats from the Trump administration. Betsy DeVos, Trump’s pick for education secretary, is a leader in radical privatization of schools. Eighty percent of charters in Detroit, Flint, and Grand Rapids, where she has concentrated her attention, are profit-making, far higher than anywhere else in the country. In Detroit, reports Kate Zernike in The New York Times, “A flood of charter schools in the past decade has created what even charter school supporters call chaos.” Susan Dynarski, a professor at the University of Michigan, worries that “if for-profit colleges are left to regulate themselves we will see ballooning debt, ballooning defaults, and students’ lives ruined.” The only effective counter to privatization is to involve broad publics in education. Public involvement in schools was the heart of the common-school tradition.

In this centenary year of John Dewey’s classic Democracy and Education, it’s useful to recall the ties between the two concepts. The term “common school,” broader than simply “government schools,” first appeared in the 18th century to describe institutions created by religious groups “as community funded instruments of education for all children of the region or neighborhood.” During the Revolutionary period, the common-school movement aimed to educate citizens to counter dictatorial power. “Where learning is confined to a few people, we always find monarchy, aristocracy, and slavery” wrote Benjamin Rush in 1786. The story of the struggle for common schools to extend to African Americans is told in the new Museum of African American Culture and History.

Common schools were created not only “for” the people, but also “by” the people in ways that deepened ownership and agency. In Transformation of the School, Lawrence Cremin describes how “in almost every state citizens organized to do battle in the cause of public schools. The political coalitions they formed frequently drew together the oddest collections of otherwise disparate interests.” Like unions, common schools could function as free spaces where diverse people gained power, got to know each other, and learned politics.

In a similar vein, land-grant colleges, launched in legislation signed by Lincoln in 1862, extended higher education to the “industrial and agricultural classes.” People’s involvement in land grants deepened through the cooperative extension service in which extension agents worked with communities, not only for them.

Emphasis on the democratic purposes of education is resurfacing. Harvard law professor Lani Guinier, in The Tyranny of the Meritocracy: Democratizing Higher Education, challenges the “testocracy” that replaced democratic merit with test-taking. The Coalition for Essential Schools, founded by Ted Sizer and Deborah Meier in 1984, includes hundreds of democracy schools. Campus Compact, founded in 1985 by college presidents dedicated to community service, now includes more than 1,000 colleges and has broadened its scope. It “envisions colleges and universities as vital agents and architects of a diverse democracy.”

Conservatives in recent years have made hay politically by promoting vocational education over liberal-arts education—Marco Rubio in the campaign famously called for fewer philosophers and more welders. But there is an accelerating effort to push back by integrating vocational training and liberal arts.

In higher education, a movement for “citizen professionalism” shows social impact. William Doherty, a family therapist who founded the Citizen Professional Center at the University of Minnesota, has translated the public work framework of citizenship into family professions. His partnerships are based on the idea that the energy and talent of families and communities are crucial for addressing complex problems. Citizen professionals are “on tap, not on top.” Center partnerships include work with African-American fathers fighting degrading images of black fatherhood, with middle-class families fighting over-scheduled lifestyles, and with the Twin Cities Indian community fighting to reduce diabetes.

In 2016, Doherty expanded citizen professionalism by signing up a bipartisan group of more than 3,000 therapists in support of a manifesto, “Citizen Therapists Against Trumpism.” They define Trumpism as authoritarian, degrading political trends far larger than one man. After the election they are transitioning to an international network with a name still under discussion like Citizen Therapists for Democracy. They stress public dimensions of therapy by proposing that “personal and collective agency are at the heart of the work of psychotherapists [and] only flourish in a democracy where we the people are responsible for our common life.”

Citizen Therapists for Democracy intimates possibilities in many fields if professionals come to see themselves as citizens and schools and colleges again become part of places, not simply partners with places. If historians, sociologists, lawyers, teachers, writers, businesspeople—and politicians—awaken to public responsibilities for democracy as a way of life it will have enormous impacts.

All such examples hold potential to rebuild support for public education. They prepare students for jobs that “pay and matter,” as Julie Ellison, founding director of the Imagining America college consortium dedicated to democratic purposes of humanities, puts it.