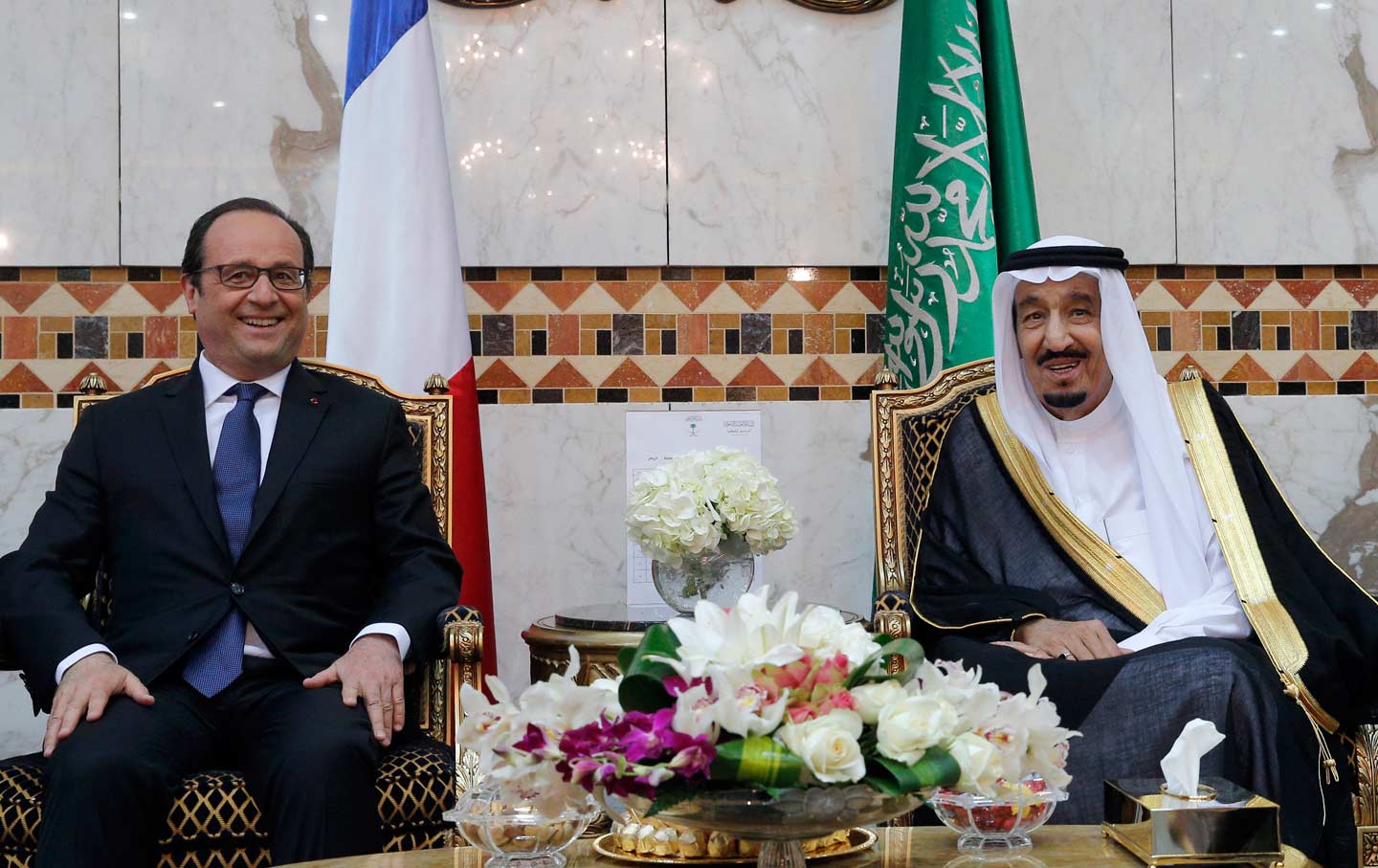 The West should take the horrific occasion of the Paris attacks to reconsider its acquiescence in Saudi priorities for Syria and the Middle East. From the vantage point of Riyadh, the great danger emanating from the Middle East is the spread of Iranian influence. But from a European and American point of view, the rise of Daesh (ISIS, ISIL) in Syria and Iraq, and its campaign of terror abroad, is the most urgent threat, along with a proliferation of Al Qaeda affiliates. That King Salman is simply mistaken has been amply demonstrated.

I am making an argument about priorities, not in any way suggesting that the virtually genocidal Bashar al-Assad can be allowed to remain in office in the long term. Assad’s disingenuous suggestion that France was wrong to back the revolutionaries against his regime in 2011, and that it should now support his murderous policies, is pure misdirection. Assad pushed the rebels toward radicalism by firing tank shells at peaceful demonstrators. He for the most part avoided fighting Daesh, apparently hoping that if it were the most successful rebel group, the world would have no choice but to line up behind him. His suggestion that somehow Parisians are to blame for the attacks on them is both tasteless and monstrous. It is also true, however, that his regime is not the most pressing threat to the North Atlantic world.

That King Salman is simply mistaken has been amply demonstrated.

The young suicide bombers who brought down darkness on the City of Light are said to have spoken of grievances regarding French airstrikes on Daesh in Iraq and Syria. Clearly gullible, they had been fed a line. Daesh had not been a French priority, just as it is not a Saudi one. Riyadh had flown some missions in Syria against the phony caliphate of Abu Bakr al-Baghdadi, but never struck it in northern Iraq, and in recent months has ceased those missions in favor of concentrating on its war on the Houthi rebels in Yemen. France only began bombing Daesh positions in Syria in September, though it has flown missions in Iraq for the past year.

We may conclude that for Saudi Arabia, defeating the Houthis in Yemen is a more pressing matter than attacking Daesh. The United States and France have been heavily arming the Saudis, who are not bothering to join in the campaign against the most menacing enemy of the West. King Salman sees the Houthis, who derive from the Zaidi Shiite community in Yemen (making up about a third of the population) as agents of Iran. In fact, they are indigenous Arabs, however brutal their methods have been, and there is no evidence they have received significant aid from Iran. Salman has led a coalition that has intensively bombed Yemen, including civilian neighborhoods, with planes being refueled midair by the United States, in what is clearly a huge unnecessary tragedy and distraction from the menace of the phony caliphate. Just as bad, Al Qaeda in the Arabian Peninsula has been strengthened by the turmoil produced by the Saudi war on Yemen.

In Syria, the Saudi priority is overthrowing the Baath government of Bashar al-Assad. The upper echelons of the Baath Party are dominated by Alawite Shiites, though the government is secular. It is strongly allied with Iran. The Saudis would like to see Syria turned into an image of themselves, an authoritarian, hard-line Sunni fundamentalist regime, and so desperately want to see Assad overthrown.

France, given its close alliances and strong trade and investment ties with Saudi Arabia and other Gulf oil and gas monarchies, appears to have allowed the latter to set its Syria policy. Since 2012, France has been the most aggressive of Western states in supporting the Sunni rebels and in seeking Assad’s ouster. But during the past two years, many of the groups that received French money to buy medium weaponry have forsaken democratic aspirations for hard-line Muslim fundamentalism. Some have defected to Daesh or openly allied with the Syrian Al Qaeda affiliate, the Support Front (Jabhat al-Nusra).

The Daesh line that the Paris attacks were to punish France for intervening in Syria is pure propaganda.

Since the Saudi and Gulf priority is overthrowing Assad and removing an ally of Iran, they have been unconcerned about this turn toward radical extremism among the Syrian Sunnis. The large Salafi (hard-line fundamentalist) group, the Free Men of Syria (Ahrar al-Sham), is a darling of the Saudis and the Turks, and is openly allied with Al Qaeda. Taking its cue from Riyadh, France has given firm support to increasingly hard-line groups in Aleppo such as the Monotheism Brigade (Liwa’ al-Tawhid).

The most effective potential ally against Daesh is the Islamic Republic of Iran. The Obama administration and the UN Security Council, in doing the deal with Tehran on nuclear enrichment, has begun the process of bringing it in from the cold. France, representing its Saudi allies on the UNSC, was the least enthusiastic about the Iran deal, and at some points tried to scuttle it. (Once the deal seemed like a sure thing, French CEOs were all of a sudden very interested in investing in that country.) Iraq could not have retaken the key cities of Tikrit and Baiji north of Baghdad in recent months without both Iranian help and US air support. When, in the spring of 2014, the Shiite-dominated government of Iraq tried to warn the Hollande government that Daesh was planning attacks in Paris, the tip was dismissed by the French foreign ministry as being unfounded.

The threats in Syria have to be seen as fourfold: Daesh, Al Qaeda, the hard-line anti-democratic Salafis, and the Baath regime of Assad. They cannot all be addressed simultaneously, but rather have to be dealt with in turn, with the most dangerous taken on first. From a Western point of view, defeating Daesh and Al Qaeda surely should take precedence over removing Assad, though he has so much blood on his hands that he must eventually be made to step down as well. But violently overthrowing the Baath regime now would simply assure that Daesh or Al Qaeda would sweep into Damascus and take over all of Syria. If Daesh can do so much damage to Paris as a small, landlocked desert statelet with a population of some 3 million under its control, imagine how dangerous it would be if it had a whole country of 20 million, with airports and a major seaport.

How ‘Islamic’ Is the Islamic State?

In contrast, the Saudis prioritize overthrowing Assad and are entirely unafraid of Daesh and Al Qaeda. They are actively promoting the illiberal hard-line Salafis who would oppress Syrian Alawite Shiites, Christians, Druze, and secular Sunnis—some two-thirds of the country. Riyadh’s priorities are positively dangerous to the West, and a further catastrophe waiting to happen for unfortunate Syria.

The Daesh line that the Paris attacks were to punish France for intervening in Syria is pure propaganda. The government of Iraqi Prime Minister Haider al-Abadi had intelligence on this planned Daesh assault on the French capital some 18 months ago, at a time when France was not even participating in the Syria campaign. It seems rather that the reverse is true—France intervened in Syria beginning this September because it finally accepted these intelligence warnings and was attempting to disrupt the training camps from which an attack on Paris might be launched. As it turned out, the plot was already too advanced for the fall Syrian campaign to forestall it.

In his response to the Paris attacks Friday night, French President François Hollande said that his country is now at war. He would have been better off saying that his country was the victim of a criminal gang. Paris must also stop listening to Riyadh about how to proceed, and seek out effective allies on the ground to which to give aid. Those are Iraqi Shiites, Syrian Kurds, moderate Sunnis, and Iran. If Daesh can be brought down, Syria’s Al Qaeda should be the next to be neutralized. Assad, who produced the polarization and radicalism that now plagues Syria and the greater Mediterranean, must eventually acquiesce in free elections, as must his Sunni fundamentalist foes. But first things first. The mad bombers and beheaders of Raqqa and Mosul have to be dealt with. Despite its lip service, Saudi Arabia has shown it is unlikely to help much with that battle.