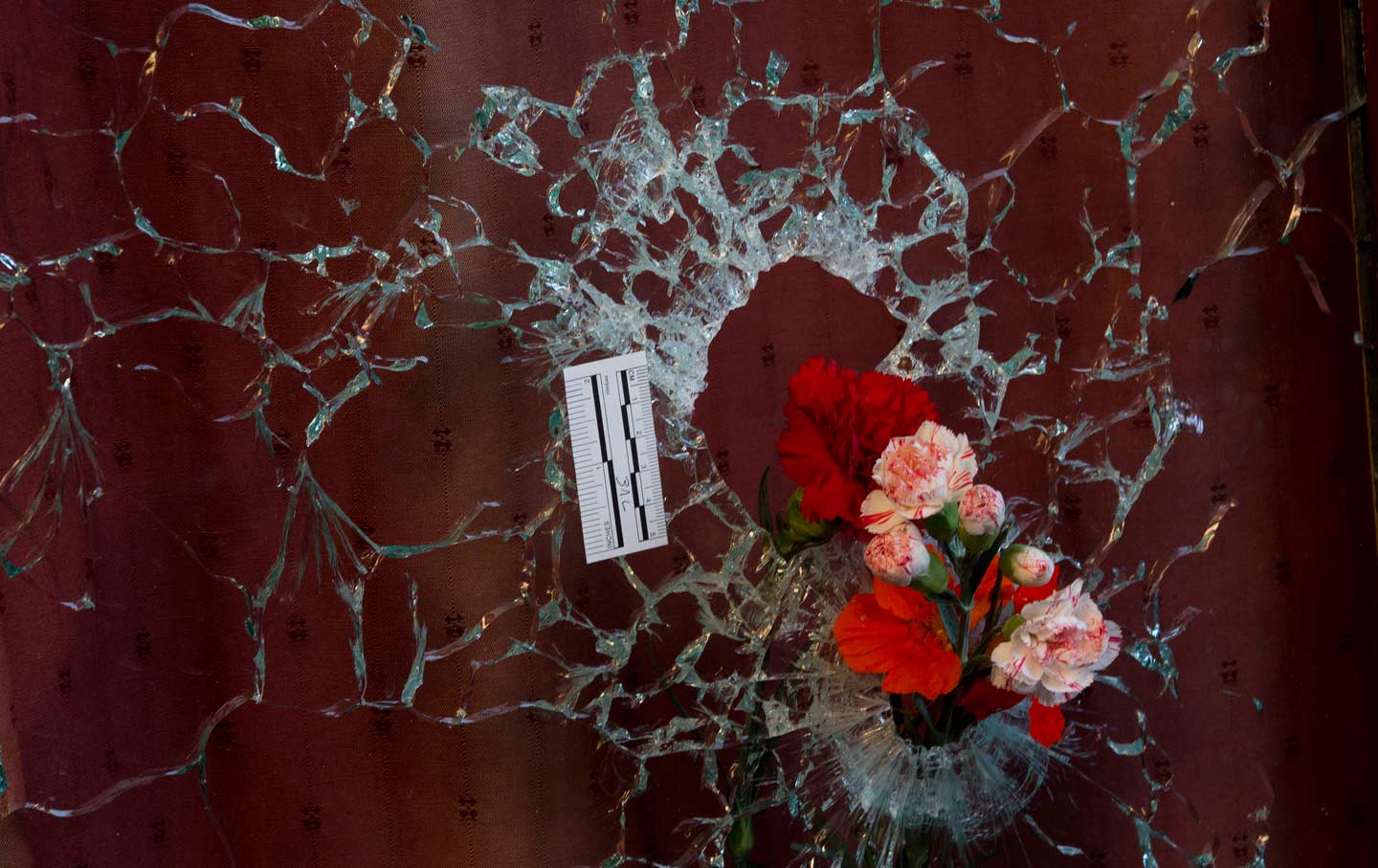 Flowers are put in a window shattered by a bullet as Paris mourns the victims of a terrorist attack. (AP Photo / Peter Dejong)

What happened in Paris on November 13 has happened before, in a shopping district of Beirut on November 12, in the skies over Egypt on October 31, at a cultural center in Turkey on July 20, a beach resort in Tunisia on June 26—and nearly every day in Syria for the last four years.

The scenario is by now familiar to all of us. News of the killings will appear on television and radio. There will be cries of horror and sorrow, a few hashtags on Twitter, perhaps even a change of avatars on Facebook. Our leaders will make staunch promises to bring the terrorists to justice, while also claiming greater power of surveillance over their citizens. And then life will resume exactly as before.

Except for the victims’ families. For them, time will split into a Before and After.

France Should Stop Listening to Saudi Arabia on Syria

14 Years After 9/11, the War on Terror Is Accomplishing Everything bin Laden Hoped It Would

We owe these families, of every race, creed, and nationality, more than sorrow, more than anger. We owe them justice.

We must call to account ISIS, a nihilistic cult of death that sees the world in black and white, with no shades of gray in between.

We must call to account Bashar al-Assad, whose response to peaceful protesters in the spring of 2011 was to send water cannons and military tanks to meet them.

We must call to account the governments of the United States, France, Britain, Russia, Iran, and many others, who lent support and succor to tyrant after tyrant in the Middle East and North Africa, and whose interventions appear to create 10 terrorists for every one they kill.

We must call to account George W. Bush and Dick Cheney, whose disastrous invasion of Iraq in 2003 and subsequent disbanding of the Iraqi army destabilized the entire region.

We must call to account the Saudi kings—Salman, Abdullah, and Fahd—whose funding of Wahhabi doctrine gave rise to the scourge of Islamic extremism.

When I was a child in Morocco, no clerics told me what to do, what to read or not read, what to believe, what to wear. And if they did, I was free not to listen. Faith was more than its conspicuous manifestations. But things began to change in the 1980s. It was the height of the Cold War and Arab tyrants saw an opportunity: They could hold on to power indefinitely by repressing the dissidents in their midst—most of them secular leftists—and by encouraging the religious right wing, with tacit or overt approval from the United States and other Western allies. Into the void created by the decimation of the Arab world’s secular left, the Wahhabis stepped in, with almost unlimited financial resources. Wahhabi ideas spread throughout the region not because they have any merit—they don’t—but because they were and remain well funded. We cannot defeat ISIS without defeating the Wahhabi theology that birthed it. And to do so would require spending as much effort and money in defending liberal ideas.

The government of Saudi Arabia has beheaded more people this year than ISIS.

I am a novelist. Every year, I spend a great deal of my time giving readings or lectures at which, almost unfailingly, I am asked about Islam and Muslims and the wars now consuming the Middle East. I try to explain and contextualize, remind people about history and politics, bring in some culture and art into the mix. But every few months, when another terrorist attack happens, the work I do seems to be for nothing. What chance does someone like me have when compared with the power of well-funded networks?

The beheadings, the crucifixions, the destruction of cultural heritage that ISIS practices—none of these are new. They all happened, and continue to happen, in Saudi Arabia too. The government of Saudi Arabia has beheaded more people this year than ISIS. It persecutes Shias and atheists. It has slowly destroyed sites of cultural and religious significance around Mecca and Medina. To almost universal indifference, it has been bombing Yemen for seven months. Yet whenever terror strikes, it escapes notice and evades responsibility. In this, it is aided and abetted by Western governments, who buy oil from tyrants and sell them weapons, while paying lip service to human rights.

Muslims are the primary victims of ISIS—and its primary resisters.

I have no patience anymore for people who claim that Muslims do not speak out. They do, every day. Muslims are the primary victims of ISIS, and its primary resisters. It is an insult to every one of the hundreds of thousands of Muslim victims of terrorism to lump them with the lunatics who commit terror. The truth is that ISIS unleashes its nihilistic violence on anyone—Muslim, Christian or Jew; believer or unbeliever—who doesn’t subscribe to their cult.

I wish I could do something for the victims of terrorist violence. But I am a writer; words are all I have. And all I know is that I want, with all my heart, to preserve and celebrate what ISIS wishes to destroy: a multi-ethnic, multi-religious, multi-cultural life.