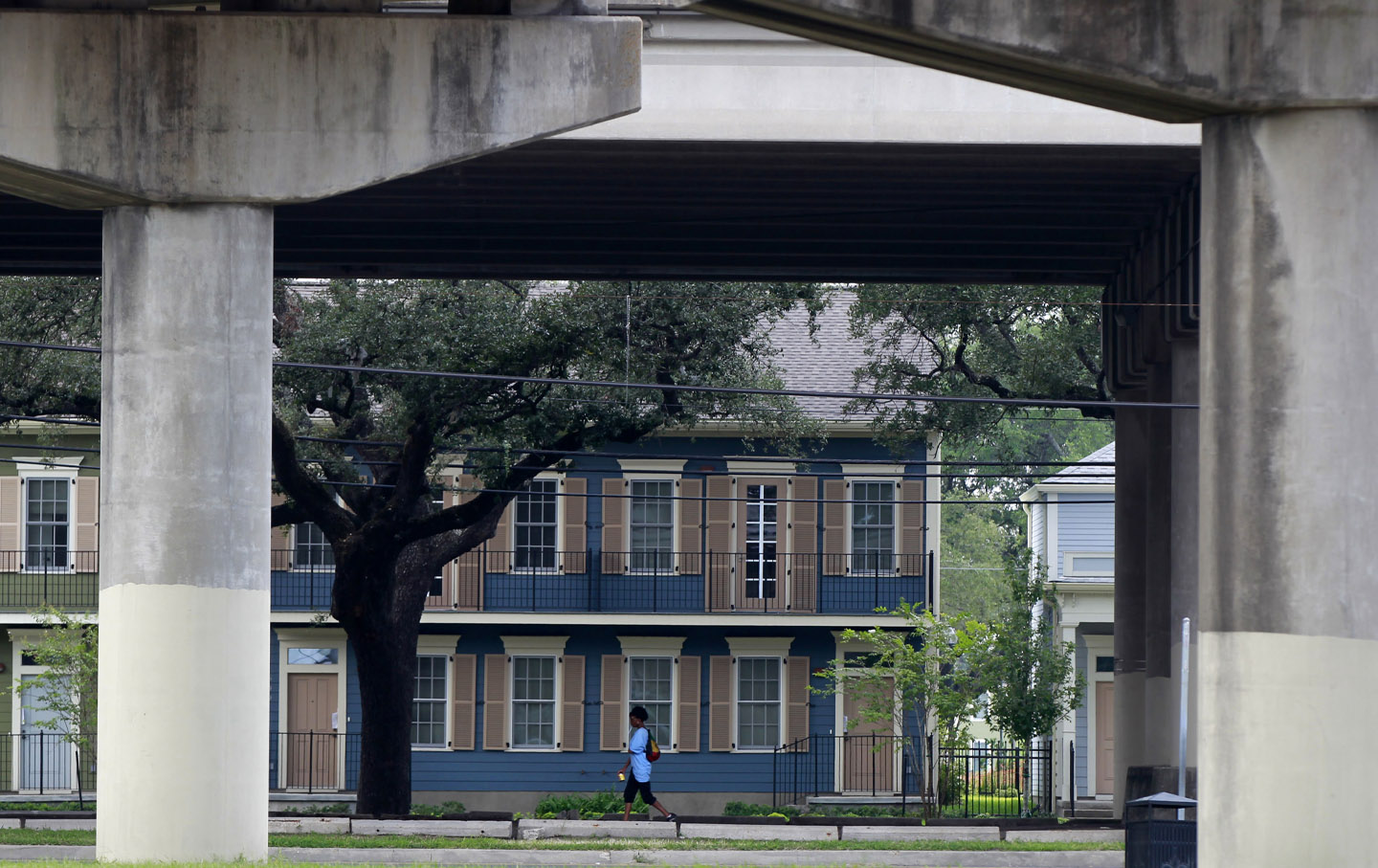 Soon after Hurricane Katrina and New Orleans’s failed levees displaced 400,000 of the city’s residents, the Housing Authority of New Orleans (HANO) and the US Department of Housing and Urban Development (HUD) made a move that would dramatically reduce the availability of public housing in the city. The plan, announced in early 2006, involved the demolition of the city’s four major public housing complexes, C.J. Peete, B.W. Cooper, Lafitte, and St. Bernard, known collectively as the Big Four.

The hurricane hadn’t rendered the brick buildings uninhabitable. HUD determined that they were structurally sound and would be fine after a good cleaning. But the forced removal of residents caused by the storm coincided with a desire on the part of the agencies and local business interests to replace the projects with mixed-income development. Of the just more than 4,500 units that were demolished beginning in 2008, only 700 public housing apartments are included in the mixed-income redevelopment.

Barred from their pre-Katrina homes, where did the rest of those families go? A new report from the Institute for Women’s Policy Research attempts to find out. It argues that black women bore the brunt of this aspect of the disaster, since the vast majority of lease holders in public housing are women. In the four projects, upwards of 75 percent of families had female heads of households with children under 18. The report, called “Get to the Bricks: the Experiences of Black Women from New Orleans Public Housing after Hurricane Katrina,” also argues that these women’s experiences and demands have largely been left out of the rebuilding process. It tries to correct the record by gathering their stories.

Over the course of two years, from 2008 to 2010, researchers interviewed 184 black women who had lived in the Big Four at the time of the hurricane. They were now in Baton Rouge, Houston, or back in New Orleans. Taken together, their words paint a picture of the horrors and disruptions that these women and their families have experienced. After managing to survive the rising floodwaters in their homes, days-long waits for help, and chaotic conditions in the Superdome, they were bused to unfamiliar places where they had to determine how, when, and whether to go home.

“I feel like a bag of snacks at a Super Bowl party. I just get passed ‘round and ‘round.” — 59-year-old woman

The report describes the effect of displacement on these women’s economic conditions. At the time of the hurricane, 53 of the 184 interviewed were unemployed and not in school. But at the time of the interviews, that number had doubled. Three years after the disaster, 105 were neither in jobs nor enrolled in school. About half of the interviewees said they were less concerned about getting back into public housing than they were about finding an income. But the barriers to securing work after the storm were many.

Some of those interviewed speak of the outright discrimination they face from employers in their new cities, where the way they speak and their French-sounding surnames mark them as New Orleanians. A woman in Houston says, “When I open my mouth [and they hear my dialect] or if I give them my résumé, see where I worked, [they say] ‘filled the position.’” Another woman, also in Houston, says, “They say our last name even make it seem like we’re from somewhere else.”

The lack of reliable public transit also keeps jobs out of reach for these survivors. Only 12 of the 184 interviewed owned a car in 2005, but they all speak of the pressure to have one both in the cities to which they were relocated and in the redesigned New Orleans to which some have returned. Ads for jobs demanded that applicants have their own reliable form of transportation, and everyday tasks like getting to the grocery store or a doctor’s appointment became time-consuming and arduous. One woman, reminiscing about her city’s good public transit prior to the storm, tells an interviewer, “I didn’t have to spend no gas money [in New Orleans] because I could use my feet.”

Most of the women interviewed said they wanted to return home to New Orleans, and many either had or were in the process of doing so over the course of the study. But poor and confusing communication from HANO made those moves more difficult, according to the report. Many of the women complained of a lack of help from housing authority officials as they struggled to understand their options and the resources available. Officials established an expanded system of housing vouchers in New Orleans — a move they said would de-concentrate poverty — moving former public housing residents into units where vouchers are accepted. The problem then became finding landlords who didn’t discriminate against Section 8 voucher holders. When in public housing, residents’ rent included utilities. Under the new system, voucher holders had to pay these additional costs on top of rent, and often a solid credit score was a condition of getting approved for a rental.

Those who wanted to return to New Orleans and navigate the new systems faced a housing shortage. Rents increased by 35 percent in the first year following the hurricane. One retiree interviewed in 2008 commented on how expensive everything had become. “They want to make you feel bad [for coming back]…. the price of food has risen twice as much as it was before Katrina,” she said. “Everything has gone up triple, except for our benefits.”

Women who remained in the cities to which they’d been displaced didn’t fare much better. Houston housing authority officials told a disabled retiree to move into a homeless shelter after her housing voucher was stolen and the authority refused to replace it. Barred by shelter rules from staying there during the day, the woman turned again to the housing authority and was advised to spend her days in the city’s parks. About enduring such unstable living conditions, the 59-year-old woman told her interviewer through tears, “I feel like a bag of snacks at a Super Bowl party. I just get passed ’round and ’round.”

The report’s authors recommend that those who shape anti-poverty, housing and disaster recovery policy should improve communication among service providers as a way to guard against the occurrence of such nightmares, one of many recounted in “Get to the Bricks.” It also recommends that the construction of mixed-income housing not be prioritized over housing that will remain permanently affordable for low-income residents.