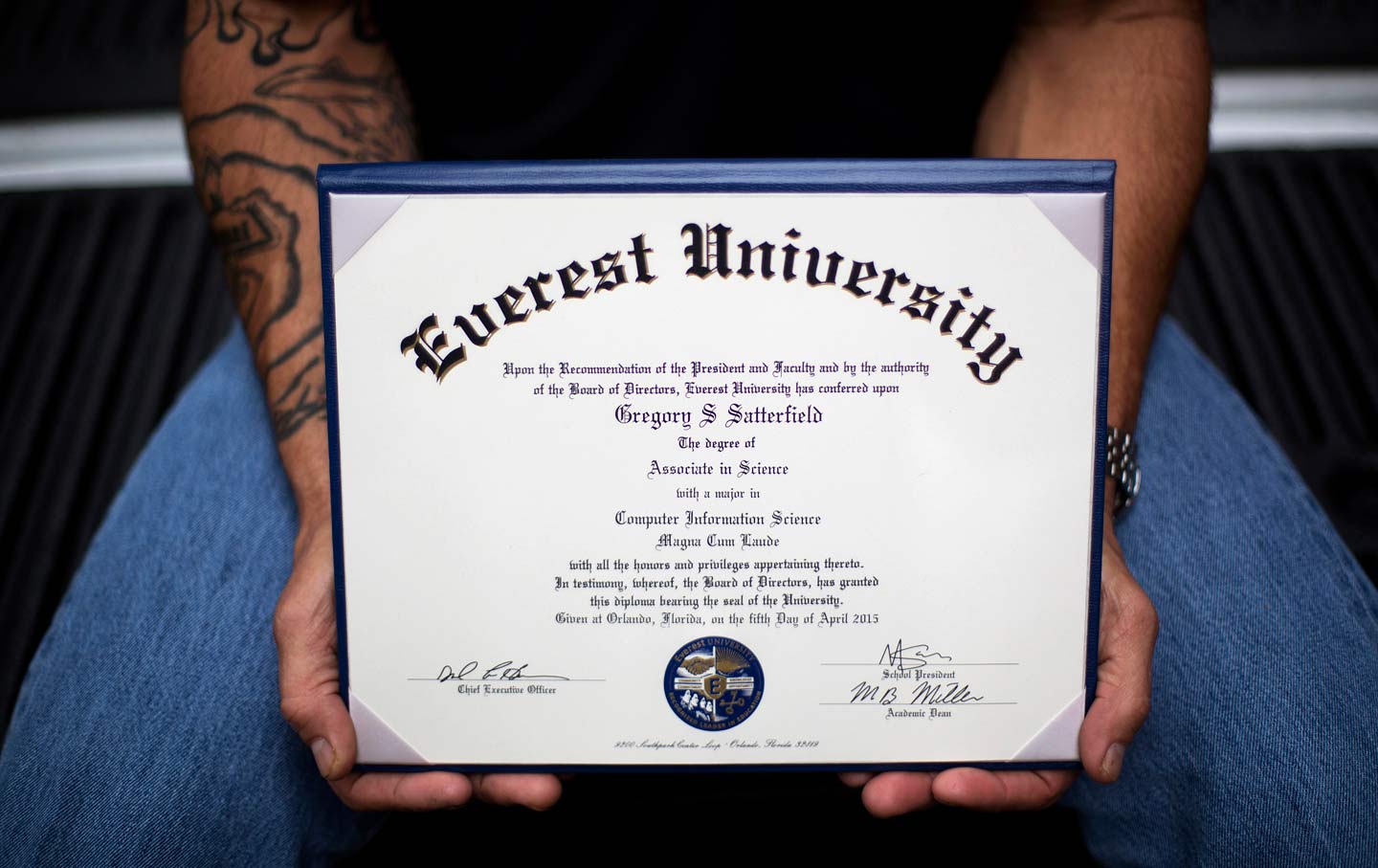 Shane Satterfield, a roofer who owes more than $30,000 in debt for an associate’s degree in computer science from one of the country’s largest for-profit college companies that failed in 2014, holds his diploma in Atlanta on March 11, 2016. (AP Photo / David Goldman)

College students aren’t generally known for their reticence, but some schools have found an efficient way to hush them up, by forcing them to sign along a dotted line.

New research by The Century Foundation (TCF) and Public Citizen reveals that for-profit schools have used deceptive enrollment contracts to erect a legal firewall, perhaps completely unbeknownst to the student, to preempt access to justice. According to TCF’s research, among higher-education institutions, these clauses are almost exclusively used by for-profit educational institutions.

College-enrollment contracts should, in theory, outline students’ rights and responsibilities, but the main purpose behind the restrictive clauses has nothing to do with education, it’s simply “protecting the financial interests of the school by limiting a student’s legal rights, should something go wrong.” And it has often gone awfully wrong. Massive private college chains like the now-bankrupt Corinthian have become notorious nationwide for operating as fly-by-night scams, delivering subpar courses or incompetent programming.

In one instance reported in The New York Times, a group of former students of Lamson College in Illinois went through the painstaking process of preparing a legal case against their institution for cheating them and failing to fulfill its academic obligations, only to realize too late that an obscure restrictive clause that prevented class-action lawsuits meant their case would never make it into court. Many contracts impose such “go it alone” clauses, TCF says, to preempt individuals who share grievances from banding together to sue on behalf of a larger group of victims. Preventing collective legal action presents a potentially devastating barrier for former students of the large for-profit school groups with many campuses nationwide, all with similarly shady financial schemes. (Federal rule changes recently proposed by the Consumer Financial Protection Bureau might amend arbitration procedures to allow financial consumers to file lawsuits in some cases, but would specifically exclude for-profit colleges.)

On top of blockading full-fledged lawsuits, contracts often impose a binding arbitration process through so-called “internal process requirements.” These quasi-legal proceedings are often heavily skewed in favor of the corporation, yet corporations often bill arbitration as a supposedly efficient way to resolve a dispute. In reality, argues TCF researcher Tariq Habash, although “these schools are forcing students into this ‘faster, cheaper process,’ they are requiring them to go through mandatory internal processes that can take months to complete, making it anything but expedited.”

The Lamson students entered a private arbitration, facing a corporate lawyer and hostile arbitrator who “ruled against the former students and, to top it off, socked them with a legal bill of more than $350,000 because of the ‘hardship’ the students had supposedly inflicted on the company that owned the school.”

Contracts could also restrain students’ legal rights through a “gag clause,” which curtails disclosure of any future out-of-court settlements with the institution. (Such preemptive rules almost seem to anticipate predatory activities as an integral part of the for-profit business model).

Habash noted the various contractual restrictions can compound each other in a way that could deter any form of legal or regulatory action. In more than a dozen schools TCF investigated, Habash says, the administrations “first require students to go through an internal grievance process” prior to arbitration, which the school could use to deter or intimidate them from seeking further recourse through the government.

“While these processes cannot actually restrict students from complaining to a government agency or an accrediting body,” Habash says, “by presenting students with information that they must complain [to the institution first], it sends a very misleading message.” In one example presented in the study, veteran students tried to complain to the Veterans Administration about the the quality of their ITT Tech programs, and the school then “scolded former students for taking their complaints to the U.S. Department of Veterans Affairs rather than using the agreed-to grievance procedures,” thereby “implying that the student had violated a contractual obligation” when in fact it was within their right to complain to the official veterans’ advocate.

Because of the [restrictive clauses’] confidential nature, law enforcement authorities at state and federal levels have much more difficulty learning about complaints because institutions using these clauses are trying to stop any negative complaints from going public.

The stakes are high. The largest institutions that deploy sneak contract clauses include big for-profit college brands that rake in millions in federal largess. The University of Phoenix, for example, a nationwide program with more than 254,000 students, reportedly received over $2.75 billion in federal financial aid. Students’ financial victimization is exacerbated by the general public backlash against the for-profit institutions, which has rendered their diplomas virtually worthless on the job market. (The schools, however, can readily seek federal bankruptcy relief, unlike their ruined former students.)

Public Citizen has petitioned the Department of Education urging it to revise its Title IV funding regulations to prevent federal Title IV higher-education funds from supporting schools that impose arbitration clauses: “these arbitration clauses are detrimental to students, hamper efforts to uncover wrongdoing by institutions” that receive federal aid, and thus “place the federal investment…at risk,” the group argued, with the worst effects suffered by low-income students, people of color, and veterans. Going forward, the organization urged education authorities curb legal preemption tactics by essentially banning any institution seeking federal support from imposing any “agreement that requires a student, in advance of a dispute…to agree to arbitrate such a dispute.”

Moreover, since the language of restrictive contract clauses is so sweeping, Habash notes, it’s even possible for the legal barriers to extend to non-financial grievances, such as a civil-rights complaint alleging racial or gender discrimination. Ultimately, it’s not just an assault on students’ financial security, but a stealth war on civil justice and educational democracy.

Although the truth about for-profit higher education is finally bubbling to the surface, the most damning evidence of corruption may never see the light of day, because the victims didn’t understand that signing up for college meant signing away their voice.