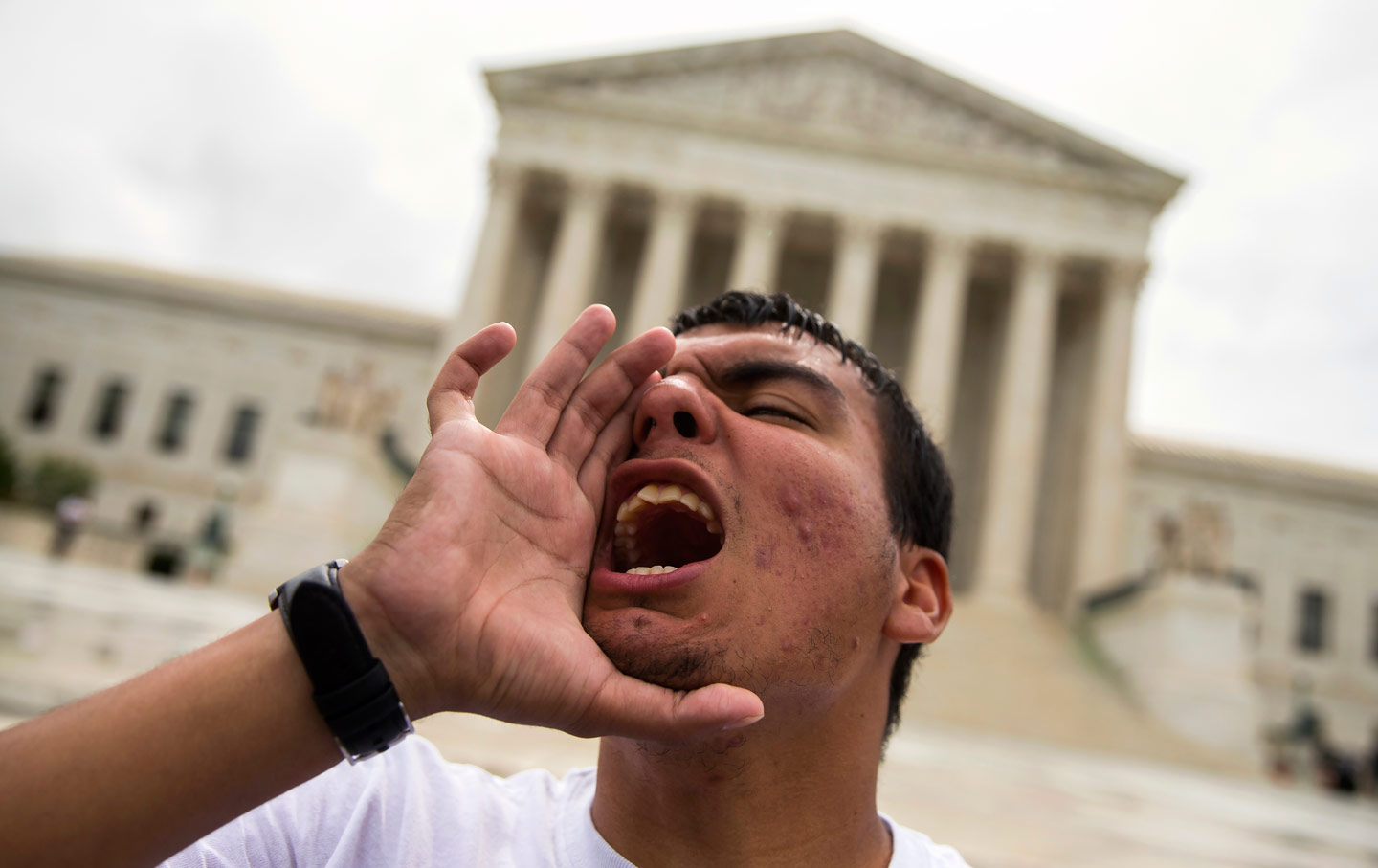 A young man yells during a demonstration on immigration at the Supreme Court in Washington, DC, on June 23, 2016. (AP Photo / Evan Vucci)

The Supreme Court’s one-sentence non-ruling in the most important immigration case of the year landed Thursday with an enormous impact. The 4–4 deadlock effectively killed President Obama’s deportation-deferral program for the rest of his presidency. In the immediate, the estimated 4 million undocumented immigrants who would have benefited from the initiative are returned to their precarious lives. In the short term, the Supreme Court’s result revives a longstanding debate about where immigration advocates ought to pivot—to return the focus to a full congressional overhaul of the system or keep pushing for more creative executive action to stop deportations.

The past eight years have shown that Latino and immigrant voting power, which helped propel Obama to victory and reelection, does not on its own determine immigration policy. Congress and the Republican Party, now the Party of Trump, have made a weapon out of doing nothing. That’s why, the Court’s ruling notwithstanding, congressional politics are still not at the top of all immigrant advocates’ priority list. They remain focused on demanding that Obama put a moratorium on deportations.

On Monday, dozens of activists blocked the street in front of Immigration and Customs Enforcement’s Atlanta Field Office to echo these calls for a moratorium on deportations, chanting, “Not one more deportation! ICE ICE ICE! Dismantle ICE!” Activists with the #Not1More deportation coalition have pledged more actions later this week.

“With the courts also taken over by the party politics that have ruled the immigration issue for more than a decade, President Obama has a responsibility to pursue alternatives to make his policies more humane,” said Marisa Franco, director of Mijente, which coordinates the #Not1More campaign. “The way to keep communities from living in fear is to put a freeze on deportations.”

“Even with DAPA, only a fraction of us [undocumented immigrants] would be protected,” said Tania Unzueta, legal and policy director for Mijente. In light of the Obama administration’s stepped up raids, its sprawling immigrant detention system, and the possibility of a Trump presidency, Obama ought to halt all deportations for now, the group argues.

Obama seemed to answer exactly that call last Thursday. “I don’t anticipate that there are additional executive actions we can take,” Obama said while responding to the Supreme Court decision. “We’ve butted up about as far as we can on this particular topic.”

Thursday’s ruling marks the denouement of Obama’s immigration leadership. It has been a crushing eight years, defined by early and ultimately unfulfilled promises to pass comprehensive immigration reform, and by Obama’s misguided attempt to use record-breaking deportations as proof of his good-faith efforts to meet Republicans in the middle. Only in recent years did he change tack, adopting his sweeping but short-term executive actions to protect select groups of undocumented immigrants. His first executive action Deferred Action for Childhood Arrivals, announced in 2012, benefited roughly 700,000 undocumented immigrants who came to the United States as children. It is still in place, and remains untouched by the current legal battles. The program in legal jeopardy now, Obama’s 2014 initiative called Deferred Action for Parents of Americans and Legal Permanent Residents (DAPA), would have granted two-year protection from deportation and work permits to undocumented parents of US citizen or green card–holding children who cleared a host of other hurdles. One could argue that these programs were his attempt to ameliorate the devastation of the deportation machine he’s created.

Since Obama took office, he has steadily increased his deportation rate, continuing even after it became clear that immigration reform would be a no-go in Congress. In fiscal year 2015, Obama deported 462,463 people, the most of any year of his presidency, and more than any other president before him. This even though Department of Homeland Security Secretary Jeh Johnson has touted the fact that apprehensions of migrants at the border—a proxy for gauging how many people cross into the country illegally—are at their lowest levels in 40 years. And a large-scale deportation operation requires a large-scale detention system. Under the Obama administration the detention system has ballooned; today more people pass through the nation’s immigrant detention system annually than through the federal Bureau of Prisons.

All of this underscores what’s at stake in the presidential election.

On this last point, Donald Trump and Hillary Clinton agree. “The election, and the Supreme Court appointments that come with it will decide whether or not we have a border and, hence, a country,” Trump said in a statement responding to the ruling. Clinton, also emphasizing the election, put it a little differently in her response.

Trump, unsurprisingly, is not a fan of Obama’s executive actions. He supports the 26 states, led by Texas, which sued the US government to challenge the DAPA program. He’s already pledged to rescind DAPA, should it see the light of day, and Obama’s first executive action on immigration as well.

Clinton, who has made protecting Obama’s legacy a defining theme of her presidential campaign, has repeatedly said that not only would she extend Obama’s executive actions, she’d “go further to bring more people relief and keep families together” than her predecessor. These directives to immigration enforcement agencies assign classes of undocumented immigrants a level of priority for removal; she’s hinted that, in addition to not deporting young undocumented immigrants who benefit from DACA and parents of US citizens who would benefit from DAPA, she’d also de-prioritize the deportations of the parents of DREAMers, as some undocumented youth are known.

Clinton has also said that as president she’d reform the detention system, and shut down privately run detention centers. She’s also come out against Obama’s recent raids on newly arrived Central American asylum seekers, and promised to make sure that Central American migrant children who’ve come to the United States in increased numbers in recent years have access to attorneys, something they’re currently not guaranteed.

But Clinton still reserves a special place in her platform for comprehensive immigration reform. She’s not alone. It remains the holy grail policy for many mainstream immigration advocates, who see a congressional overhaul of the nation’s immigration system as the only vehicle for lasting policy change. It’s certainly the only large-scale way to offer the nation’s 11 million undocumented immigrants a way to pursue citizenship.

Clinton, acknowledging that, has even painted herself into the kinds of corners Obama did as a candidate to emphasize her sympathies. In February Clinton pledged to keep immigration as among her top priorities and, pressed by MSNBC’s Jose Diaz-Balart at a town hall, said she’d introduce comprehensive immigration-reform legislation in the first 100 days of her presidency. Immigration watchers have heard those promises before.

“We’ve heard that talk before, but let’s take it at face value,” Kica Matos, director of immigrant rights and racial justice at the Center for Community Change Action, told me. “Ultimately our goal is to bring about comprehensive immigration reform.” Matos said that especially in the wake of the Supreme Court decision, the dozens of immigrant-rights groups she worked with across the country had arranged their political activities with that goal in mind. The main priority now, especially as DAPA winds its way back through the courts, will be to mobilize Latino and immigrant voters to head to the polls in November, Matos said. CCC Action plans to focus on three key battleground states—Colorado, Florida, and Nevada—which all have large immigrant and Latino populations. Matos said her group has also identified a handful of Senate races they want to affect outside of those battleground states: Republican Senators Mark Kirk of Illinois, Ron Johnson in Wisconsin, and Pat Toomey of Pennsylvania. And the reality is, no matter how pro-immigrant Clinton may be as president, the future of comprehensive immigration reform depends on the composition of Congress.

CCC Action’s goal is to create the conditions for comprehensive immigration reform to be politically viable come 2017. But some of the changes that are necessary for that to occur sound like wishful thinking. They include not only a Clinton win in November but also a Democratic retaking of both houses of Congress, and still at least some of the Republican Party will have to do a 360 on immigration, “after they realize they need to get right with this issue unless they want their party to disintegrate completely,” Matos said. “I know these are a lot of variables to take into consideration, but we have been thinking through what it will take to win and at least if we are successful with civic engagement efforts and mobilizing voters, there is a possibility we will be able to bring about comprehensive immigration reform.”

These promises for the future can seem awfully far off. The last decade has been a wearying one. Add it all up, and for immigrants and those who care about them, the losses families have borne have outweighed the victories in federal policy. While undocumented immigrants have shifted the cultural conversation with their radical visibility, policy wins have been fewer, narrower, and focused on select groups of the most sympathetic immigrants. The immigrant-rights movement, with so much at stake, faces few easy options from here.