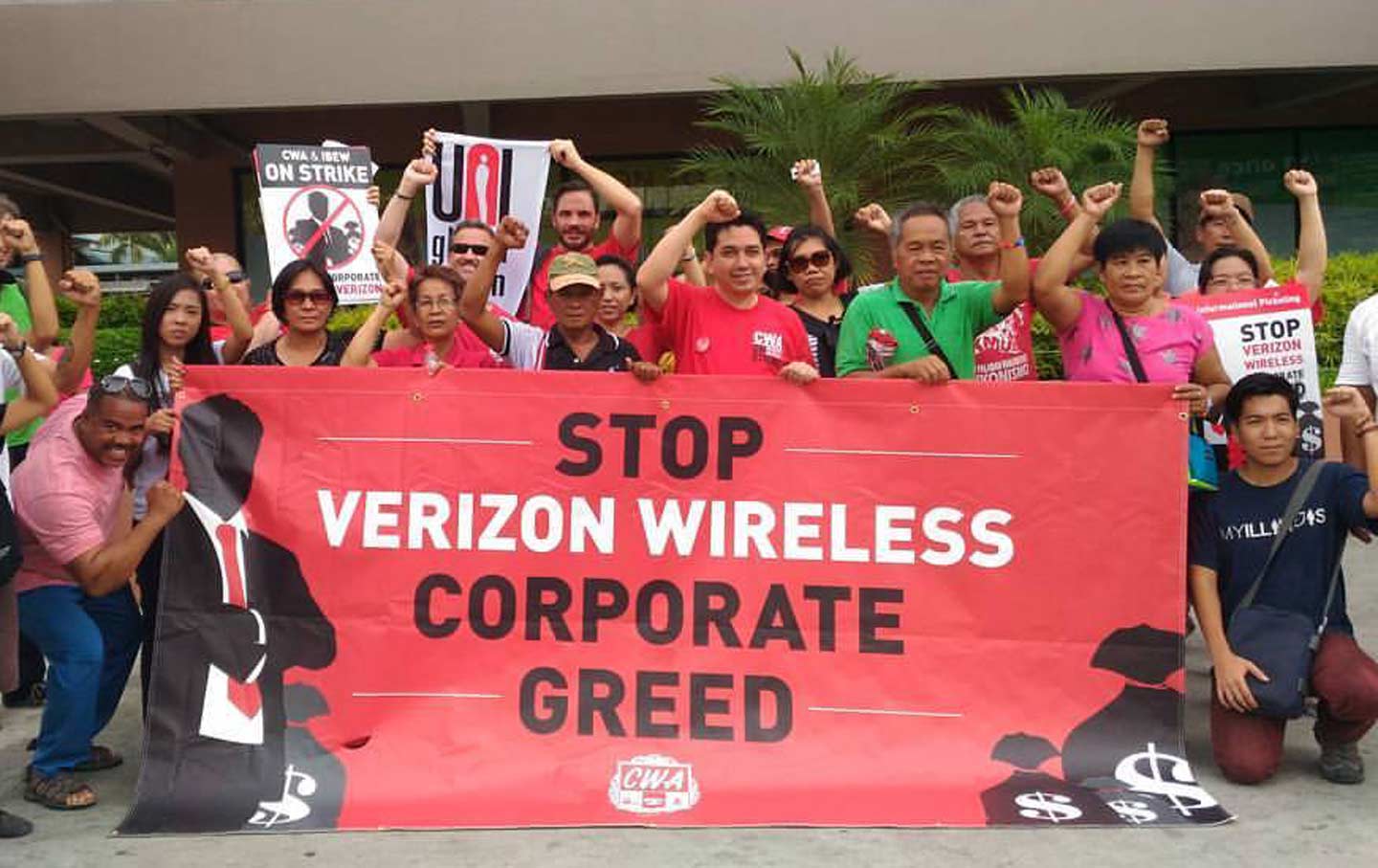 Filipino workers picket in solidarity with the Verizon strikers in Quezon City in the Philippines. (Courtesy of Bien Pilipinas)

The contact began when a Filipino call-center workers’ advocacy group, BIEN Pilipinas, reached out to US strikers via Facebook. A few messages later, a CWA delegation was en route to the Philippines to see who was doing the jobs that they weren’t.

The delegation of union staff and call-center workers met a small group of Teletech Nova workers in early May, along with BIEN activists, left-leaning union Kilusang Mayo Uno (KMU), and global labor federation UNI. They discussed the labor conditions at local third-party call centers and began a budding trans-Pacific collaboration. When attempting to visit a Verizon building near Manila on May 11, however, the group was menacingly confronted by a group of armed men, pursued outside, and later briefly detained by a police “SWAT team,” according to CWA’s documentation. The US activists departed safely, but the Teletech workers have since reported retaliation against at least two staffers. (CWA recently filed a formal unfair-labor-practice charge.)

BIEN organizer Michael Concepcion mused that some business commentators have chided the workers’ outreach by appealing to economic nationalism, arguing “the job loss for them is job generation here.” Concepcion takes a different angle on the industrial power configurations: “We answer that our solidarity is based on the workers’ fight…. It’s a global fight of job security and…a decent living wage.” In the long run, “this is a race to the bottom. What they really need is cheap labor, and it’s not sustainable, because when they can find cheaper labor in other countries, these companies will go to the other countries.”

Inside Teletech, the routine overwork has gone into overdrive due to the strike, Dubnau says. Workers are adding overtime each workday plus an extra day shift: “they’re working really, really long hours under very miserable conditions, very few breaks.” To match US customers’ time zones, the delegation learned, workers run on an eternal graveyard shift, regimented by strict call-time performance targets. Come morning, weary young workers, many with under-used college degrees, spill out of the office and return home with little hope of ever seeing promised overtime pay.

A lack of stable labor contracts goes together with precarious conditions and high turnover, Dubnau says, but lest workers object, “Anyone who says they’re interested in organizing a union will be fired instantly.”

This isn’t just Teletech’s problem; it’s Verizon’s business model’s hardware. “Verizon chose a country where you can pay $1.78 an hour,” Dubnau says, “where workers get blacklisted if they try to form a union.”

The company, which also contracts call centers in Mexico and India, says its recent contract offer would cover job security for downsized workers. Still, even the union—which also struggles against subcontracting of other union jobs—has scant leverage against a global industry superstructure in which the network the company sells is also instrumental in cheapening labor costs.

While CWA ranks have thinned by thousands since several call centers shuttered in 2014, Teletech’s website boasts of a global labor surplus, ripe for seamless “optimization” of “customer care” to “Reduce Costs to Serve” in hospitality, finance, and even government services.

Yet the bilateral delegation also built on a tradition of labor-movement globalization: From prewar US-Mexico solidarity campaigns uniting New Deal and Cardenista unions, to the cross-border maquiladora labor alliances forged during the early days of NAFTA. Organizing across the Pacific, however, poses a different challenge. BPO organizingrepresents the new frontier in technology-driven offshoring, subbing low-paid, overeducated technicians abroad for dwindling unionized beige-collar workforces as the telecom sector drastically restructures to shift toward more deskilled jobs.

Verizon dismissed the union’s visit as “another page straight out of the CWA’s fictional playbook.” In a statement to The Nation, Verizon suggested that labor leaders were grandstanding by spending union funds “on a vacation to the Philippines–especially at a time when 36,000 of our employees are lucky to get $200 a week from a union strike fund,” and “welcomed” negotiators back to the bargaining table.

But the Quezon meeting raised the prospect of a different labor dialogue. “The common ground for us [is] the common enemy, the corporate greed,” Concepcion says.

Organizing efforts in Filipino call centers are still fledging. Yet the workers’ story isn’t just one of impoverishment. Around the time of the delegation’s visit, a few dozen Filipino comrades reportedly staged a work slowdown to protest the overwhelming overtime burdens.

BIEN envisions the alternative as a more ethical trade structure, in which the Philippines would invest in sustainable modernization and internal industrialization. To the extent that outside investment is used to foster development, he adds, it should be accompanied by transnational organizing efforts in tandem with US unions. “If they have rights to unionize,” Concepcion argues, “we should have too.”

Through these initial online contacts, Concepcion suggested a more durable organizing network could emerge, like “a call center workers of the world alliance…that could bring all those workers with similar jobs in the fight for better conditions.”

But, noting technology’s role in the networking developing among the very workers that Verizon deliberately tried to atomize, Concepcion adds, “It’s really about time. This outsourcing was really made possible by the advancement of technology. Why not maximize [this] for the benefit of the workers?”

How far can Verizon workers’ expand their organizing links? In the shadow of big telco, a nimbler global labor movement can reclaim strands of the network they helped build to seize the means of communication.