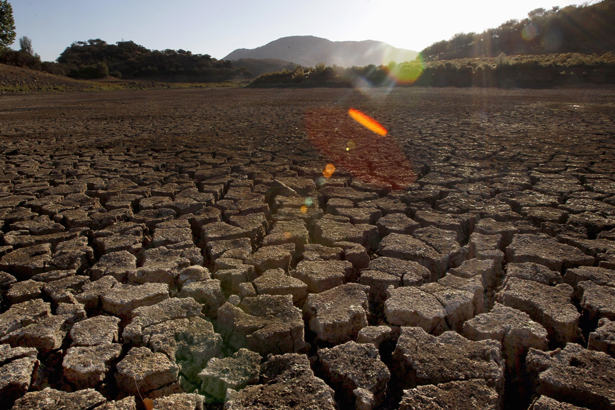 The Runge reservoir in the town of Runge, Chile, suffers from a drought (Reuters/Ivan Alvarado)

There is a brutal conundrum at the heart of the fight against catastrophic climate change: when people grasp just how dire things are, they’re as likely to hunker down as to rise up. Maybe more likely.

A haunting New York Times Magazine story from last weekend demonstrates this. It’s about Paul Kingsnorth, a onetime environmental activist who has essentially given up, devoting himself instead to a multifaceted project of grief and survival called Dark Mountain. “Everything had gotten worse,” Kingsnorth told writer Daniel Smith. “You look at every trend that environmentalists like me have been trying to stop for 50 years, and every single thing had gotten worse. And I thought: I can’t do this anymore. I can’t sit here saying: ‘Yes, comrades, we must act! We only need one more push, and we’ll save the world!’ I don’t believe it. I don’t believe it! So what do I do?”

What Kingsnorth did was draft an apocalyptic manifesto, titled Uncivilisation. “It is, it seems, our civilisation’s turn to experience the inrush of the savage and the unseen; our turn to be brought up short by contact with untamed reality,” he wrote. “There is a fall coming. We live in an age in which familiar restraints are being kicked away, and foundations snatched from under us… Now a familiar human story is being played out. It is the story of an empire corroding from within. It is the story of a people who believed, for a long time, that their actions did not have consequences. It is the story of how that people will cope with the crumbling of their own myth. It is our story.”

“Uncivilisation” is not a practical plan of action. Rather, it’s a call for a new artistic and literary movement meant to grapple with life amid the coming ruin. “It is time to look for new paths and new stories, ones that can lead us through the end of the world as we know it and out the other side,” wrote Kingsnorth. “We suspect that by questioning the foundations of civilisation, the myth of human centrality, our imagined isolation, we may find the beginning of such paths.” Meanwhile, as the Times story says, he and his family have moved to rural Ireland, where they plan to grow their own food and develop the skills their children will need to survive in a hotter world.

In some ways, Kingsnorth’s story is an old one—he is, after all, hardly the first charismatic visionary to withdraw from society amid visions of the end. What makes it new is that there’s nothing supernatural or even all that improbable in his predictions. Plenty of sensible people are similarly alarmed. The science writer Jared Diamond, for example, recently put the odds of human civilization surviving another 100 years at 51 percent—a terrifyingly thin margin of optimism. Indeed, the only people offering assurance that everything is going to be fine are the climate change denialists, who are either ignorant, mendacious or both.

It would be nice if this sense of desperation and imminent peril were galvanizing, but in general that’s not how people work. We’ve long known that fear leads to conservatism. As a 2008 paper in Science puts it, “[T]he degree to which individuals are physiologically responsive to threat appears to indicate the degree to which they advocate policies that protect the existing social structure from both external (outgroup) and internal (norm-violator) threats.” When liberals get scared, they move rightward. “Fear makes liberals more conservative, and even authoritarian,” the science journalist Chris Mooney wrote in his book The Republican Brain: The Science of Why They Deny Science—and Reality. “Just make them mortally afraid, and they’ll become much more inclined to support decisive leaders and crackdowns on civil liberties.”

This dynamic affects how people process news about climate change. When faced with threatening messages about the environment, one group of researchers found, people will either try to control the external danger or the internal fear. “If the external danger—in this case, the impacts of climate change—cannot be controlled (or is not perceived to be controllable), then individuals will attempt to control the internal fear,” the wrote. “These internal fear controls, such as issue denial and apathy, can represent barriers to meaningful engagement.”

As tempting as it is to sneer at the fear/conservatism connection, it’s also not hard to understand. I feel it myself—when I think about the loss, breakdown and chaos that climate change could portend, I’m filled with mute despair, and far more concerned with protecting my son than saving the world. (It’s why I ordinarily never write about the subject, even though its import eclipses everything else.) Fear narrows the vision and makes us provincial. What is desperately needed is a credible source of hope. If anyone out there manages to find one, they will have taken an invaluable step towards beginning to conserve the world.

Read more of The Nation's special #MyClimateToo coverage:
Mark Hertsgaard: Why TheNation.com Today Is All About Climate
Christopher Hayes: The New Abolitionism
Naomi Klein: The Change Within: The Obstacles We Face Are Not Just External
Dani McClain: The ‘Environmentalists’ Who Scapegoat Immigrants and Women on Climate Change
Mychal Denzel Smith: Racial and Environmental Justice Are Two Sides of the Same Coin
Katrina vanden Heuvel: Earth Day’s Founding Father
Wen Stephenson: Let This Earth Day Be The Last
Katha Pollitt: Climate Change is the Tragedy of the Global Commons
George Zornick: We’re the Fossil Fuel Industry’s Cheap Date
Dan Zegart: Want to Stop Climate Change? Take the Fossil Fuel Industry to Court
Jeremy Brecher: ‘Jobs vs. the Environment’: How to Counter the Divisive Big Lie
Jon Wiener: Elizabeth Kolbert on Species Extinction and Climate Change
Dave Zirin: Brazil’s World Cup Will Kick the Environment in the Teeth
Steven Hsieh: People of Color Are Already Getting Hit the Hardest by Climate Change
John Nichols: If Rick Weiland Can Say “No” to Keystone, So Can Barack Obama
Michelle Chen: Where Have All the Green Jobs Gone?
Peter Rothberg: Why I'm Not Totally Bummed Out This Earth Day
Leslie Savan: This Is My Brain on Paper Towels