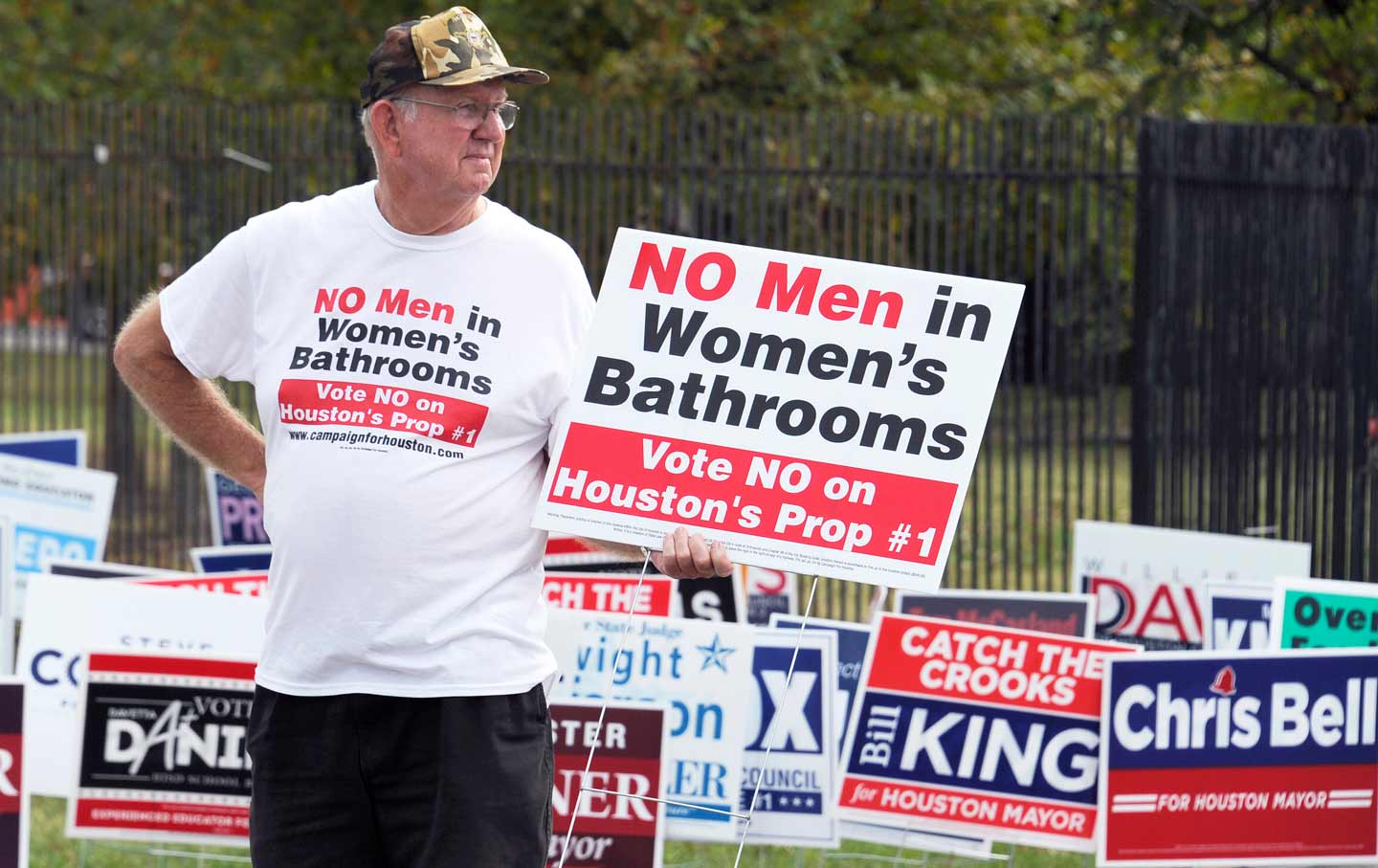 In this October 21, 2015, file photo, a man urges people to vote against the Houston Equal Rights Ordinance outside an early-voting center in Houston. (AP Photo / Pat Sullivan)

Roger Goodell and the National Football League recently had the chance to do the right thing—or at least take a breath and listen to people counseling them to do the right thing—yet, at the speed of a young Deion Sanders, they were proactively pathetic. The question before Commissioner Goodell: Should the league consider moving the February 2017 Super Bowl out of the city of Houston.

Why move the big game? Well, Houston put some of their citizens’ civil rights up for a vote and by a wide margin declared that LGBTQ people needed to accept a second-class form of citizenship. The referenda, aptly named the Houston Equal Rights Ordinance (HERO), would have extended nondiscrimination protections to also cover the LGBTQ community. Yet it wasn’t even that it lost as much as how it lost, which should turn the stomach of anyone with an ounce of compassion. The anti-HERO forces took this fight to the gutter. The “no” campaign zeroed in on the “T” in LGBTQ and was viciously as well as unapologetically transphobic. The dominant slogan on T-shirts and signs was “No men in women’s bathrooms.” As Republican lieutenant governor of Texas Daniel Patrick said, the campaign “was about protecting our grandmoms, and our mothers and our wives and our sisters and our daughters and our granddaughters.”

Texas Governor Greg Abbott even tweeted the phrase “No men in women’s bathrooms,” just in case trans people hadn’t been demonized quite enough. It was ugly as sin and spoke one of the most toxic traditions of the old South: the idea that any atrocity can be justified if done in the name of “protecting our daughters.”

It should be noted that not one example exists of a trans person exposing their genitals in a public bathroom, and that it would be illegal for anyone to do so in any context. And not that you heard Greg Abbott talking about it, but the record of men following women into bathrooms to commit sexual assaults actually exists. But this campaign was ginned up to divide and conquer the people of Houston. After the results were in, former Houston Astros star Lance Berkman—who also publicly campaigned against the ordinance—gave a quote for the ages when he crowed, “Tolerance is a virtue that’s killing this country.”

I contacted Upworthy journalist Parker Molloy, who is a trans woman, for comment. “It’s always frustrating when things like basic human rights are put to a public vote, and that’s what happened Tuesday in Houston,” she said. “It’s even more frustrating when those leading the opposition run a campaign based on lies, which again, was exactly what happened on Tuesday. Seventeen states and more than 200 municipalities have enacted similar protections without incident. But each time this gets brought up for discussion—whether you’re talking about Houston or New York—the same lies get trotted out.… No matter which way last night’s vote went, the fact that there was a single person (let alone thousands) willing to cast a vote to say I’m less human and less legitimate than they are is absolutely heartbreaking. I went to bed [Tuesday] night heartbroken for my friends in Houston.”

Now, without HERO, discrimination has not only been codified in Houston, it has been emboldened. This poses a threat first and foremost to the LGBTQ population of the city. It also creates a dangerous environment for employees of any business planning to travel to Houston—like the National Football League.

Under Roger Goodell’s leadership, the NFL has established a pattern of responding to hot-button social issues in a manner that is, to be kind, reactive and skittish: Goodell waits, takes the temperature of public opinion, flip-flops, and looks like he has the spine of a Slinky. We’ve seen him publicly get weak in the knees when it comes to taking a stand on violence against women, the health of the players, or even whether to take money from the military to salute the troops. Usually this league does its business in shadows. When exposed, it backpedals faster than Richard Sherman covering Julio Jones.

Yet, when it came to Houston, Goodell was firm as oak. The ink had not even dried on HERO’s defeat before the NFL issued an immediate statement saying, “This will not affect our plans for Super Bowl LI in 2017. We will work closely with the Houston Super Bowl Host Committee to make sure all fans feel welcomed at our events. Our policies emphasize tolerance and inclusiveness, and prohibit discrimination based on age, gender, race, religion, sexual orientation, or any other improper standard.”

Translated, the message of this statement was, “The Super Bowl is not up for discussion.”

I spoke to Cyd Zeigler, one of the founders of OutSports and author of the forthcoming book Fair Play: How LGBT Athletes Are Claiming Their Rightful Place In Sports. He was stunned by how rapid the response had been. “What’s so strange about this is how slow the NFL was to respond to virtually the same exact situation in Indiana, where the NFL holds its annual Scouting Combine, yet here it took them about 12 hours, and for most of that Goodell was sleeping,” he said. “I think with most things with big-money sports you have go to the root: big money. The Super Bowl is the biggest money of the year, and I can only guess they didn’t want any of that money getting nervous. The swift way in which the NFL has spoken makes it crystal clear that, as an institution, it doesn’t give a crap about equal rights or discrimination protection for the average LGBT fan.”

This decision by the NFL comes after the New York Giants became the first team to finally make a “You Can Play” video against LGBTQ discrimination. It comes after the league took demonstrable steps to portray themselves as having a zero tolerance policy on anti-LGBTQ bigotry. Yet clearly, when it comes to the Super Bowl—a k a Woodstock for their corporate partners—there can be no discussion of moving the game, even if it imperils a portion of the people coming to the city.

The idea that the Super Bowl must never “have its plan affected” by politics flies in the face of its own history. This is a league that in 1991 threatened to move the Super Bowl from Arizona because of the state’s refusal to make Martin Luther King Day a holiday. Paul Tagliabue was commissioner back then. One wonders if Goodell was in charge whether that threat would have been made at all, or if he would have just said, “This will not affect our plans at all.”

The MLK story will be told a great deal over the next year as Goodell is pushed to move the game. Within hours of the vote, an online petition was put up by football fan Ben Douthett. It references that precedent and says, “By pulling the game from Houston, the NFL can demonstrate its commitment to equality, freedom and justice in a truly meaningful way.”

Will Goodell listen to the league’s LGBTQ fans and supporters? Will he listen to his league’s own history? He will if people rally, petition, and argue that Houston, a city that elected an openly lesbian mayor, Annise Parker, was divided by a sick campaign of lies. He will if he’s pushed.

If there is one thing we know about Goodell it’s that, if pushed, he could very well topple. Do it for our daughters, Roger. But also for our sons and everyone finding space between those two labels.