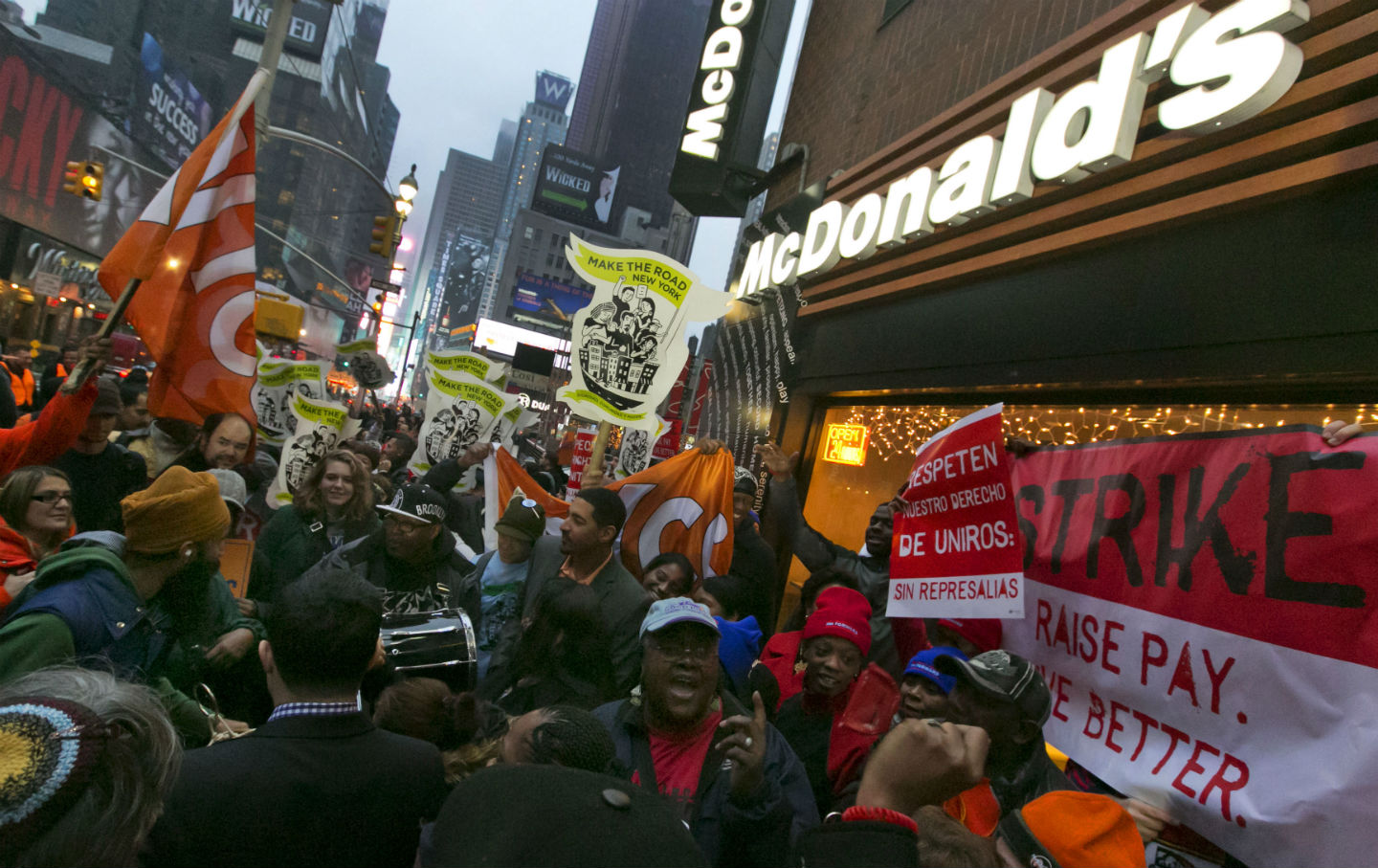 Demonstrators rally for better wages outside a McDonald’s in New York on December 5, 2013. (AP Photo/Richard Drew)

In a state notorious for a do-nothing legislature and a stubbornly huge income gap, you’d think that giving the poorest workers a 60 percent raise would be a political non-starter. Certainly, when a group of fast-food workers in New York City launched a hardscrabble protest campaign in 2012 to demand $15 an hour and a union, they knew their proposition seemed almost laughable.

But today, the 99 percent can savor a small victory, as Governor Andrew Cuomo launches a plan to raise fast food workers’ pay to up to $15 an hour in one sweeping executive action. Last week Cuomo rolled out a new Wage Board, featuring three high-profile appointees tasked with reviewing labor conditions in the industry, with a mandate to secure “honor and justice” for the state’s 200,000 fast-food workers. The three-month review process—to include public hearings across the state—will result in a recommendation from the board in July for potential wage reforms, which are designed to “not require legislative approval.”

The three-member board includes Kevin Ryan, head of Gilt and vice chair of Partnership for New York City (representing business), and SEIU Secretary-Treasurer Mike Fishman (labor), and Buffalo Mayor Byron Brown (“the public”). No actual fast-food workers sit on the board, but SEIU is the main funder of Fight for 15. And it will be representing not just non-union fast-food workers but the interests of union members in low-wage sectors like home healthcare, who have joined the wage protests.

As an executive-empaneled body, New York’s Wage Board structure allows the governor to immediately push through a wage hike that would likely horrify Albany Republicans, mirroring Obama’s recent executive actions for federal contract workers, which have boosted wages and other labor protections by circumventing the congressional horse trade.

The measure has fiscal as well as moral justifications: Fast-food workers are massively dependent on public programs like food stamps—income supports they presumably wouldn’t need if the industry spread its revenues more evenly to impoverished front-line workers, instead of subsidizing exploding salaries of burger-chain CEOs. According to University of California-Berkeley researchers, in New York, home to some of the highest income gaps in the nation, “60 percent of all fast food workers have at least one family member on welfare”—topping the rate for all fast food workers nationwide of 52 percent. And with its soaring cost of living, the state “ranks first in public assistance spending per fast-food worker, at $6,800, which costs taxpayers $700 million annually in public assistance.”

New York’s Wage Board system allows an appointed panel to “suggest changes to the minimum wage in a specific industry or job classification if it finds that wages are insufficient to provide for the life and health of workers.” Cuomo previously empaneled a wage board for tipped service workers, which has recommended various wage-boosting measures, including lifting the subminimum wage for servers and other hospitality workers “from their current rates of $4.90, $5.00 and $5.65—rates which have not increased since 2011—to $7.50 per hour” by year’s end.

While the $7.25 federal minimum wage remains stagnant, locally targeted and sector-specific wage hike initiatives have mushroomed. In Los Angeles, the City Council recently set a base wage of $15.37 an hour for employees at large hotels—rivaling the highest local minimum wage of $15 in Seattle and reflecting a national trend of incremental wage mandates in cities and states. New York City Mayor Bill de Blasio signed an executive order last September to set a living wage of $13.13 an hour for workers at businesses receiving city development subsidies, including potentially thousands of fast food and retail workers.

Jonathan Westin, head of New York Communities for Change, a group that has helped organize protests by fast-food workers, tells The Nation, “Fast-food workers definitely started the Fight for 15 around the country and hopefully will be some of the first workers to win a wage standard of $15 in New York state.” Now labor advocates hope “this is an opportunity to set a bar for low-wage industries. $15 really should be the floor… not only in the fast food industry, but all low-wage industries.”

And there’s room to grow. According to the Fiscal Policy Institute’s analysis for the billionaire capital of the world: “Over one-third of New York City employees are paid less than $14 an hour; workers of color are twice as likely to be low-wage,” and even that rate, which is well above the federal minimum, still leaves a typical family in poverty.

Perhaps foreshadowing an emerging upstate-downstate one-upmanship on the minimum wage question, de Blasio has aligned with local activists to press Albany to amend an arcane jurisdictional rule barring the city from setting its own wage floor. As a relatively liberal-leaning rival to Cuomo on the national stage (with his own inequality agenda), de Blasio has called for local authority to raise the city’s hourly minimum to $15 without Albany’s approval.

Though the other goal of the Fight for $15, the right to form a union, remains distant—largely due to a decentralized, franchise-based labor structure—remember, in 2012 a $15 hourly minimum wage seemed like a remote fantasy, too. Now organizers can seize the Wage Board as an opportunity to mobilize workers at the grassroots around levers for direct policymaking, like executive actions. “There’s probably many people in New York that even knew what a wage board was,” Westin says. But going forward, activists can “talk to workers and explain, ‘There’s a real path for you to raise your wages to $15 an hour.’”

If even the poorest New Yorkers can negotiate $15 an hour with the governor, maybe a collective-bargaining agreement at their restaurant isn’t too far off. The workers who’ve been falling behind for years are now leading a long-overdue conversation in Albany on inequality—and quickening the pace of social change in fast food and beyond.