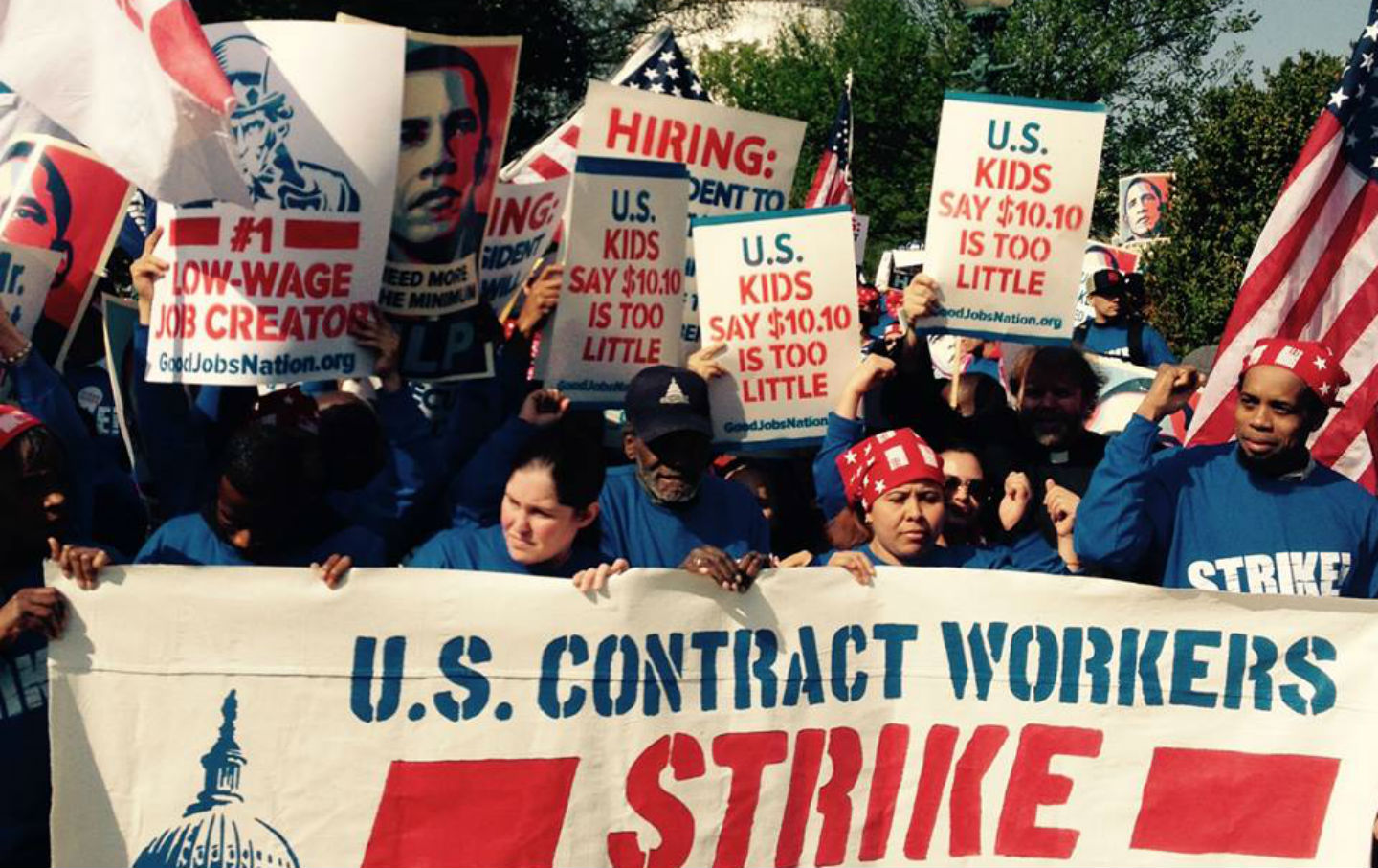 If you think the work of Congress has slowed to a crawl these days, check out the Capitol’s gift shops and concession stands; some workers have decided to give themselves a day off today—while they wait for a raise from Uncle Sam.

Janitors and food service workers at federal monuments are tired of earning a pittance on the taxpayers’ dime, so they’ve gone on a one-day strike. They join workers across the country to demand from Washington what their fellow fast-food workers and retail clerks in the private sector are demanding from private firms: $15 an hour and union rights.

Backed by various Congressional Progressive Caucus members, protesters are rallying under a big Help Wanted sign: “Hiring: A President who will sign a $15+Union Executive Order,” in hopes that the Obama administration (or the next president) will bypass congressional inertia to give contract workers a fair day’s pay.

The workers draw inspiration from the recent April 15 protests in more than 230 cities nationwide, which focused on the giant corporations notorious for keeping wages stagnant. At the same time, the Capitol worker strikes are extending an ongoing contract workers’ economic justice campaign, which is pressing the federal government to renew its historical role as the Big Boss—with the economies of scale that can intervene and boost working conditions across whole industries and communities.

The target of the campaign is hundreds of thousands of jobs in programs and companies subsidized by federal loans, grants and other funds. Despite feeding off public coffers, these measures often don’t pay workers enough to feed their families. With so many poverty-wage jobs being financed by Washington, labor advocates say the feds are squandering an opportunity to uplift the lowest-paid segments of the workforce.

Good Jobs Nation, a coalition of progressive groups, wants the White House to build on two executive actions from last year: a minimum wage hike for federal contract workers to $10.10 per hour—matching a long-stalled minimum-wage proposal in Congress—and the Fair Pay and Safe Workplaces order, which tightened oversight of contractors’ compliance with labor and safety regulations.

The coalition seeks to raise the floor for workers like Kellie Duckett, a 30-year-old food service worker with a federal vendor at the Capitol Visitor’s Center. At her current wage of about $11, she’s living with a parent but still struggling to cover basic family needs. Her subsidized wages force her to depend on other government subsidies, she says, like Medicaid and food stamps. Ultimately, she can barely afford school supplies and uniforms for her two children. And when Congress breaks for recess later this year, she fears she’ll be laid off, with no guarantee of being rehired when business picks up again.

“We need [$15 and a union] because everything is going up: groceries, taxes, everything. But our paychecks are staying the same,” Duckett says. “And most of the people who are doing the strike have children that they have to think about.”

Despite its reputation for inefficiency, the feds have become one of the nation’s most efficient producers of poor workers, through federal contracts, grants, loans, and other social programs that provide government services or outsource its functions. Collectively, according to Demos, these public investments in private vendors (which bankroll some of America’s wealthiest CEOs) drives about 2 million low-wage private-sector jobs (paying $12 or less): Washington may not seem as greedy as your average multinational, but that’s “more than the number of low-wage workers at Walmart and McDonalds combined.”

These jobs, “clustered in sectors and industries like apparel manufacturing, retail trade, basic construction, facilities support, security services, and education,” according to Demos, are actually dragging down and suppressing labor standards by paying such dismal wages—not to mention perpetuating vast income gaps even in traditionally better-paying sectors like aerospace manufacturing.

Many food-service workers like Duckett, at park concession stands or museum cafeterias, suffer particularly from the seasonal schedule, which means they can’t count on a steady long-term paycheck—much like the fast-food and retail workers who are also taking to the streets.

In contrast to the New Deal’s federal relief job programs, which helped pull millions of workers out of a deep Depression, many of today’s contract workplaces take an even lower road than their private counterparts. In the garment industry, Demos reported, a 2006 survey of several contractors found workers were earning “far less than the industry median, earning just $6.55 an hour on average,” largely lacked employer health insurance, and reported abuses like “forced overtime and hazardous work conditions.”

These jobs not only encourage low standards among private employers, but also exacerbate precarity in the labor force as a whole. Contracting fuels the trend of privatization and disinvestment, which systematically siphons off government operations and services to profit-minded corporations (often leading to unaccountability and waste).

However, while Washington massively funds dead-end jobs, Good Jobs Nation points out that local governments are leaping ahead in building fair compensation into their contracts: “over 120 jurisdictions have enacted policies that incentivize public contractors to be model employers that pay living wages, offer health care, provide paid leave and/or promote collective bargaining.” New York City, for example, just expanded its living wage ordinance to ensure city contractors are paying at least $13.13 an hour. With Congress stagnant and often opposed to pro-worker policies, the coalition wants to see another executive action offering workers both relatively high wages and “a seat at the negotiating table so they can address their workplace grievances without being forced to resort to strikes.”

Duckett hopes today’s strike action forces politicians to realize the unevenness of the contracting system, as government agencies wield public funds and private capital to make the poor poorer. “It looks like they’re giving us the minimum that they can give us and the rest is going in their pockets,” she says.

Maybe today’s strike will get politicians to notice what happens when workers withhold the labor that keeps the Capitol running—a reminder that often, the folks on the ground floor are practically the only ones in this place doing their job.