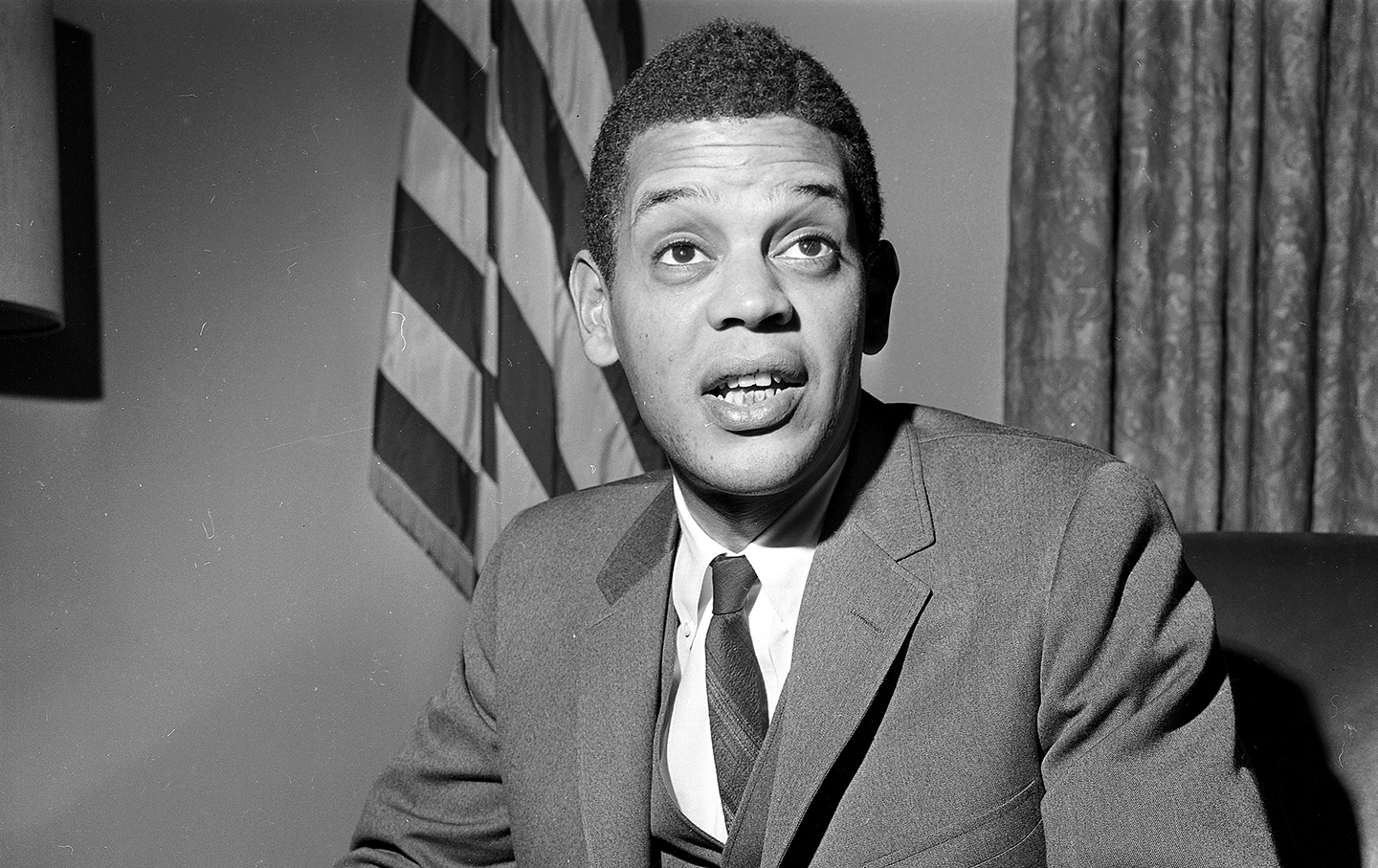 Roger W. Wilkins when he was chosen by then-President Lyndon Johnson to direct the Community Relations Service, on December 27, 1965, in Washington, DC. (AP Photo / Charles Tasnadi)

Roger Wilkins left us on Saturday, the day he turned 85 years old. A great champion of social justice, a beloved member of the Nation community, a proud father, and a good friend, he will be missed.1

In a 1995 article for The Nation titled “Racism Has Its Privileges,” Roger observed, “I know of no blacks, rich or poor, who haven’t been hurt in some measure by the racism in this country.” His own life, one of remarkable accomplishment and success, was testament to that truth.2

Born into an educated middle-class family, Roger was raised with high expectations. His father, business manager of The Kansas City Call, a black weekly newspaper in Kansas City, passed away when Roger was 8, but he had already impressed upon his son the importance of education and a love of language. “Great things are expected of you,” he wrote his 2-year-old son in a letter. “Never, never forget that.” Early mentors included his uncle Roy Wilkins and Thurgood Marshall.3

Educated in public schools in New York City and Grand Rapids, Michigan, Roger attended the University of Michigan, earning a B.A. and law degree there. In 1960, the excitement of John F. Kennedy’s election lured him to Washington and public service.4

Few have wrestled as fiercely as Roger did with the contradiction between the nation’s ideals and its flawed reality.

At a remarkably young age, Roger ascended to the highest circles of government, serving as assistant attorney general under Lyndon Johnson, then forging the greatest era of liberal reform since Franklin Roosevelt. In his 1982 autobiography, A Man’s Life, Roger wrote of the harsh pressures, the intended and unintended racial slights, and internal struggles and insecurities of that position. A comment from his obituary in The New York Times that “Mr. Wilkins had little personal experience with discrimination” could not have been more wrong. In fact, Roger bore the scars from making his way often as the only black in overwhelmingly white circles of power. As the civil-rights movement drove change from the streets, Roger became its advocate and translator on the inside. There, he pushed against the arrogance, ignorance, and complacency of the powerful. On the streets, he was often scorned as a token or a sellout. The pressures took a toll on him and his family.5

In that crucible, Roger learned firsthand the truth about social change. As he wrote, “The civil-rights progress of the Kennedy and Johnson years was not made because enlightened public officials perceived a need and took the lead. It was made because an energized interracial civil-rights movement defined the issues, mobilized public opinion and forced the White House to act.”6

After a stint running domestic programs at the Ford Foundation, Roger joined the editorial board of The Washington Post and found his true calling as a writer and journalist. At the Post, his editorials, the reportage of Bob Woodward and Carl Bernstein, and the cartoons of Herbert Block on the Watergate scandal helped drive Richard Nixon from office and earned the paper a Pulitzer Prize. From the Post, Roger moved to The New York Times, where he wrote editorials and opinion pieces from 1974 to 1979.7

In these rarefied positions, Roger pushed against the conventional limits. He called for bold action when caution was too often the watchword. He mentored and protected younger African Americans trying to navigate their way. He pushed hard to open doors and knock down barriers.8

“In a sense,” he wrote, “I have been an explorer and I sailed as far out into the white world as a black man of my generation could sail.” “I could not stand white people shutting doors in my face, so I pushed through plenty of them.” After he left the Ford Foundation, more blacks, some women, and some younger people were put on the board. McGeorge Bundy, its president, said, “I didn’t know one man could change an institution as much as Roger did, but he did it.” At the Justice Department, he was called the “conscience” of the department.9

Washington Post editor Ben Bradlee credited Roger for helping him to see the need for more diversity at the paper. At the Times, he joined a successful affirmative-action lawsuit that drove change at that institution even as he thereby burned his own bridges there.10

With his prominence, Roger could have cashed in big time, but he was, in his heart, a man of the left. In 1982, he joined the Institute for Policy Studies. In the Reagan years, the IPS was like a candle flickering in a harsh wind. In many ways, Roger was more comfortable standing against that gale than he had been in the high offices of government. He joined The Nation’s editorial board. He contributed his stature and his wisdom to friends and advocates from the Children’s Defense Fund to the NAACP, where he became publisher of its Crisis magazine. He galvanized the Movement to Free South Africa, organizing daily civil disobedience in front of the South African embassy in Washington, inspiring the young and the famous to demonstrate and get arrested. He then helped organize Nelson Mandela’s historic trip to the United States after his release from the prison on Robin Island.  Eager to touch the next generation, he joined the faculty of George Mason University, inspiring students with his learning and his humanity.11

Few have provided greater insight into how racism has scarred this nation. Few wrestled so fiercely with the contradiction between the nation’s ideals and its flawed reality. In his 2001 book, Jefferson’s Pillow: The Founding Fathers and the Dilemma of Black Patriotism, Roger offered a raw-to-the-bone portrait of a black man reckoning with the slave-owning founders of our nation, in particular the contradictions of how Thomas Jefferson, carried as a young boy by a slave on a pillow, could later write that “all men are created equal.” Roger’s integrity would not allow him to simply whitewash the founders’ acceptance of slavery. His knowledge was deep enough to understand that blacks had helped build this nation from its beginning, even supplying a good portion of Washington’s troops. His mettle was strong enough to claim for African Americans a place as patriots, not exiles, in their own land. “In a culture that batters us,” he wrote in The Nation, “learning the real history is vital in helping blacks feel fully human. It also helps us to understand just how deeply American we are, how richly we have given, how much has been taken from us, and how much has yet to be restored.”12

For those blessed to have had Roger as a friend, he was a mensch. He was the best man at my wedding, and my best friend for over 30 years. He provided wisdom, guidance, and cover for projects we launched together. He brought me into Jesse Jackson’s presidential campaign in 1984, and we worked together on Jackson’s historic 1988 run. We shared stories and jokes; he had a big and wonderful laugh. Our families traveled and played together. My daughter remembers Uncle Roger as the one who always gave her a kiss on the cheek and told her she was beautiful.13

Words fail to give full measure of the man—statesman, journalist, writer, philanthropist, activist, organizer, professor, father, husband, friend. He fought with demons his entire life. “My life wasn’t always neat and tidy,” he wrote, “and I didn’t always do the right thing.” Roger once quoted the test his mentor Thurgood Marshall said he wanted applied to his own life: “I hope they’ll say,” referring to future generations, “he did the best he could with what he had.” Roger Wilkins, a man of honor in tempestuous times, surely did that.14

These are just a few of the articles that Roger Wilkins published in The Nation over the years:

Others, as well as the magazine’s entire archive going back to 1865, can be accessed by subscribers at www.thenation.com/archive.