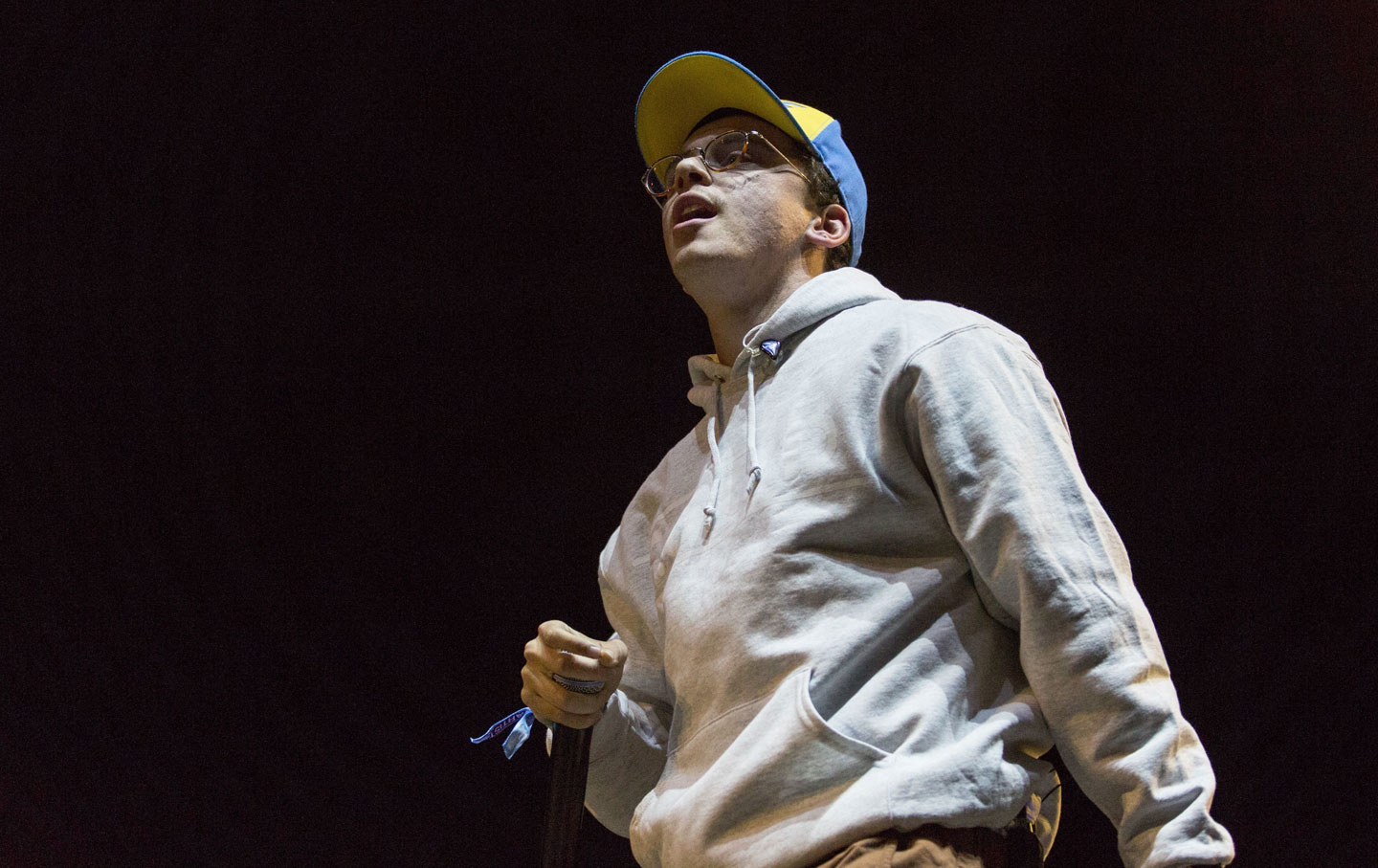 Logic has always been an outsider. In the late 2000s, when he was still an upstart rapper in Gaithersburg, Maryland, he—much like GoldLink, another rapper from Maryland—bypassed the old ways of making it in the DC rap scene. Back then, rappers who sought national recognition performed at local open mics to build a buzz. They’d sign with fledgling indie labels, release a few singles and mixtapes, and push their music to local FM stations WKYS and WPGC, hoping to crack into the rotation. That rarely worked, but, until the ascent of the Internet as a repository for new music, it was the only obvious path.

Perhaps knowing this, Logic pushed his music to high-school and university students, performing smaller shows at the University of Maryland, College Park. A wire-thin kid with a penchant for sci-fi, anime, and ’90s hip-hop, Logic looked like his fan base and rapped openly about his rough upbringing in Gaithersburg’s West Deer Park public-housing project, where his brothers sold crack and his parents were addicted to drugs.

Even though Logic is an adept lyricist known for speedy, tongue-twisting flows, much of the public narrative about him has fixated on the way he looks, not the music he creates. Logic’s father is black, his mother is white, and he’s considered by some to be a rapper who benefits from having lighter skin. Over the years, Logic has met that attention with a nonchalant, cheery persona, crafting upbeat music that resonates with both kids and adults. “I see people,” he told me in 2015. “I’m proud to be biracial. Everyone’s going to like something that’s different.”

But then Logic ignited controversy last October, when he announced that his new album would be called AfricAryaN. The album, he said, would be “about me being black and white and seeing life from two sides.… at the end of the fucking day…we all have so many different ethnicities in our blood no matter how pure we think we are.” Even so, the neologism, and its ill-considered referent, opened Logic up to sharper criticisms. The rapper OG Maco, in particular, lambasted Logic on Twitter: “Like the Aryan nation?” he asked. “Fam I know you don’t like being black but fuck.”

On the new album, released this month under the title Everybody, Logic completely boils over, funneling his frustrations into an hour of visceral self-assessment—and defiance. Much like his last album, 2015’s The Incredible True Story, Everybody is carried along by a narrated backstory—this one told by astrophysicist Neil deGrasse Tyson—that plays out between the album tracks. The protagonist on Everybody is hit by a vehicle and dies while walking home, only to have Tyson—playing the role of a God-like character—explain the meaning of life and the process of reincarnation. Unfortunately, at times, the Tyson-led narrative lags and distracts from the music—especially on “Waiting Room,” an almost-five-minute dialogue that comes after the LP’s strongest songs: “Confess,” featuring Killer Mike; “Take It Back”; “America,” featuring Black Thought, Chuck D, Big Lenbo and No I.D.; and “Ink Blot,” featuring Juicy J.

Black as We Wanna Be

Everybody is an album that seeks to unite disparate groups of people. “This is for every race! This is for every color!” a filtered voice exclaims on “Hallelujah,” the album’s opening song. On the title track, Logic raps: “White people told me as a child / As a little boy playing with his toys / I should be ashamed to be black / And some black people look ashamed when I rap / like my great-granddaddy / didn’t take a whip to the back.” Then, on “Take It Back,” he succinctly articulates his grievance with the criticisms that continue to burden him. “Everybody wanna tell me what I am, what I am not / ‘You ain’t black, you a muthafuckin’ white boy,’” he raps. He’s laid out parts of his personal story before, but this is the first time Logic has delved into his complex experience of being black and white in America.

Everybody is Logic’s most personal and expansive work, sharper than anything he’s put out before. By carefully examining his own sense of identity, and the pain—and well-earned pride—that comes along with it, Logic has released a project to which all listeners can relate. In years past, the rapper sounded a bit too much like his influences—A Tribe Called Quest and Kendrick Lamar, especially—though, on Everybody, it seems Logic has truly discovered his own voice.

The third in the rapper’s four-album concept, Everybody is also the most seething of Logic’s work so far, depicting his own anxiety within the context of our current social climate. Logic raps with a chip on his shoulder. With all of the recurring talk about cultural ownership on one hand and appropriation on the other, especially as it relates to hip-hop, the battle over his claim to be a rapper is likely one that Logic will fight his entire career. In either a bid to add legitimacy or to link arms with another rapper beset by strident critics, he gave J. Cole the last word on Everybody, with a hidden verse at the album’s end. “Do you love me yet?” J. Cole asks on the song called “AfricAryaN.” “No? OK, I’ll go harder for you / In fact, I rap ‘till I collapse / All I wanted was acceptance… I never feel your approval ’till I accept my own.”