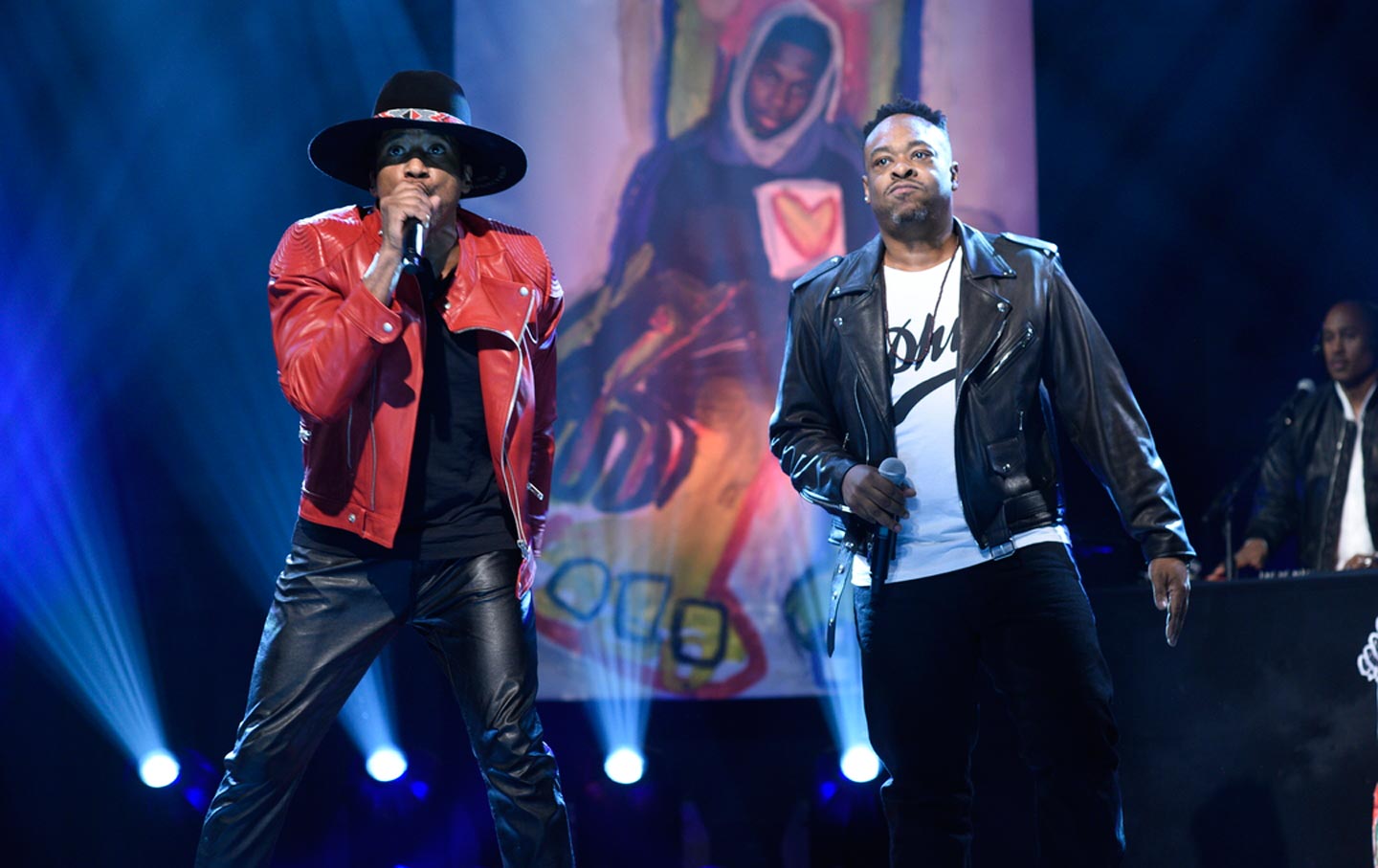 There they were this past Saturday—Q-Tip, Jarobi, and Ali Shaheed Muhammed, three-fourths of legendary rap quartet A Tribe Called Quest. It was just a few short days after Republican candidate Donald Trump was elected the next United States president. The nation had been divided that week, leading up to the group’s highly anticipated performance on Saturday Night Live. (A year earlier, the show allowed Trump to host the program despite protests.) But A Tribe Called Quest is built for situations like this. For almost 30 years, the alt-rap collective has made music about love: the respect of self and community, and the adoration for all people.

This time, though, the band wasn’t feeling so congenial. “All you black folks, you must go / All you Mexicans, you must go,” goes the chorus of “We The People….,” which Tribe performed for their first slot on SNL. Their masterful new album, We got it from Here… Thank You 4 Your service, was released the day before. The song blasts the sort of ideologies we hear more of, particularly after Trump’s campaign, in the most Tribe way possible—with subversion, and a well-intentioned message wrapped in angry, confrontational sounds. Something had changed for the group that became famous with song titles like “Can I Kick It?” and “Electric Relaxation,” and an album called The Love Movement.

That LP, released in 1998, was supposed to be Tribe’s final album. Years of personal and creative clashes between its two main stars—Q-Tip and Phife Dawg—had taken its toll. The tensions between the two were famously portrayed in Michael Rapaport’s 2011 documentary Beats, Rhymes & Life: The Travels of A Tribe Called Quest. Cited in a recent New York Times profile, Q-Tip also attributes the breakup to his desire to get out of the celebrity spotlight. After a period of self-imposed exile, he asked himself, “How much longer are you going to be here? It’s good that you sat and you’re reading these books and you’re leaving the girls alone but, like, get over yourself.”

On ATCQ’s first new album in 18 years, the group hasn’t lost its chemistry or its fluid sound.

In November 2015, the group got back in the studio following a performance on The Tonight Show Starring Jimmy Fallon to commemorate the 25th anniversary of Tribe’s first LP, People’s Instinctive Travels and the Paths of Rhythm. Four months later, midway through the new album’s completion, Phife died from complications with diabetes.

Long before acts like the Roots and Common became the standard-bearers for positive alt-rap, A Tribe Called Quest, De La Soul, and the Jungle Brothers launched the Native Tongues crew. They adopted a hippie lifestyle in the early-1990s era of tough-guy bravado. And as its career progressed, Tribe, along with Gangstarr and Digable Planets, helped establish rap’s jazz-centered period, when producers fused bebop samples and wind instruments with modernized drums. We got it from Here… is the group’s first new album in 18 years, and they haven’t lost their chemistry or their fluid sound.

We got it from Here… plays like a vintage Tribe album, without leaning too heavily on the past. Largely produced by Q-Tip, and featuring instrumental contributions by Jack White and Elton John, the music is dense and layered, similar to the jazz-inspired hybrids Tribe used to create. In a good way, the album breezes from one song to the next, making for a fluid opus with quick-moving transitions. Q-Tip would not accept distanced or cloud-based collaborations, and recorded it all in his New Jersey home studio. As a result, the album carries that jam-session quality: Long-time collaborators Busta Rhymes and Consequence offer inspired flows throughout the album, and on “Mobius,” they trade reflective bars while Q-Tip, Phife and Jarobi take a backseat. MCs Andre 3000 and Talib Kweli stop through briefly—on “Kids…” and “The Killing Season,” respectively—adding bit parts to this seamless whole. We got it from Here… recalls the golden era of hip-hop, where Tribe released albums The Low End Theory (1991) and Midnight Marauders (1993) to massive acclaim. This record takes me back to old-school rap ciphers: Group members rhyming in unison and finishing each other’s lyrics, playing off each other’s words and ideas. The vibe feels remarkably current, even if the genre as a whole has changed dramatically.

Common and the New Aesthetics of Blackness

Anderson .Paak, Then and Now

The album arrives to an audience still raw from the presidential election, to a nation starkly split along demographic lines. While there’s a strong communal feel to this record, which isn’t surprising given Tribe’s previous output, the rhymes are more acerbic here. It’s Tribe’s most politically charged album. Lyrically, the album communicates deep concern for what’s going on in our society. On “Conrad Tokyo,” Phife Dawg, with notable prescience, chastises the president-elect and the media that normalized him: “CNN and all this shit, gwaan yo, move with the fuckery / Trump and the SNL hilarity / Troublesome times, kid, no time for comedy.” On “The Space Program,” Q-Tip rebukes the notion that people should accept their position as second-class citizens: “Imagine for one second all the people are colored, please / Imagine for one second all the people in poverty / No matter the skin tone, culture or time zone / Think the ones who got it would even think to throw you a bone?” And on “Movin Backwards,” a song that renders American racism into something felt by both perpetrator and victim, guest singer Anderson .Paak reflects: “Was not a cruise that brought us here, again I feel lost / And I refuse to be stuck right here.” Later, in a joint verse, .Paak and Q-Tip dissect the dizziness that black people often feel: “Feds lining up, we’re right here / And everybody’s hands in the air … Somebody just give me direction … Cops killing us niggas everywhere.” Ultimately, the album presents itself as an elixir for the same societal despair that it identifies. The group returned just when we needed it, urging us to come together and trek the road as one. Thank them for their service.