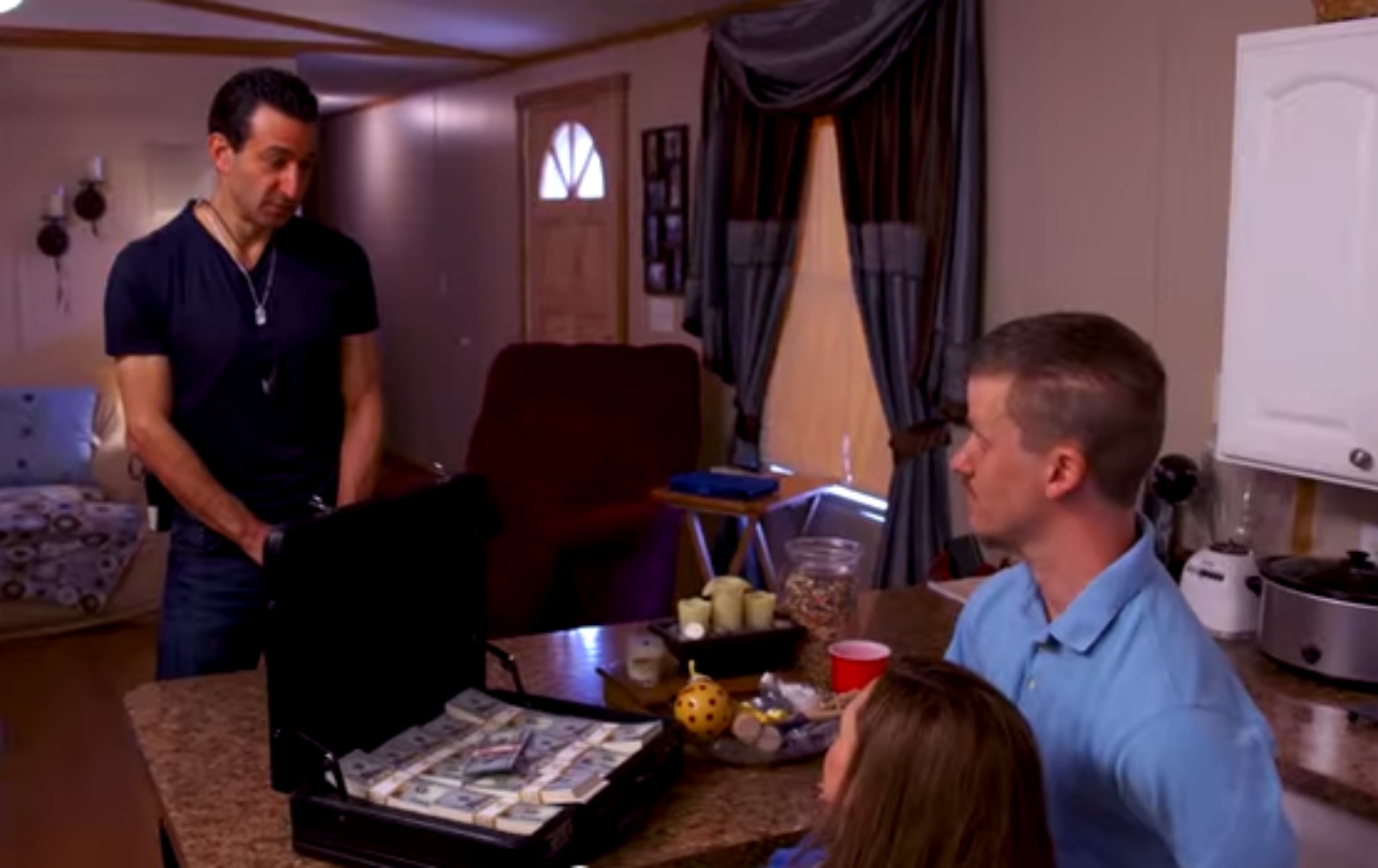 Last week, CBS premiered The Briefcase, a new reality program created by David Broome, who also produces The Biggest Loser. In contrast to participants on other hit reality shows, people in The Briefcase aren’t competing for an all-expenses-paid honeymoon prize or the opportunity to work as head chef at a world-renowned restaurant. Rather, struggling families are presented with a briefcase filled with $101,000 cash, enough to lift them out of their current economic hardship so that they are no longer living paycheck to paycheck.

But the “life-altering sum of money,” as Broome puts it, is not offered without a stipulation: The Briefcase then callously calls on these families to determine whether they are willing to share the cash prize with another family that is judged to be in equal or greater need. The briefcase recipients are presented with information about the other family’s hardships in order to determine whether they are more deserving of the cash, or at least some portion of it. Then there is a face-to-face meeting between the families where it is revealed if and how the money will be divvied up, and—wait for it—that both families had actually been given the cash-filled briefcases and told to decide who was more deserving of the dough.

In effect, The Briefcase pits one family’s financial hardship against that of another, pushing families on the brink to “prove themselves” worthy of the cash assistance.

Asking families to determine who among them is experiencing the “most need” or is the “most deserving” is an impossible choice, one that no family should have to make. In 2006, leading up to the collapse of the auto industry, the automotive-parts factory where my father worked appeared certain to close. I distinctly remember the overwhelming anxiety and looming uncertainty about my family’s economic future that I felt at 16 years old: I began to question if we would lose our house, if I would be able to attend college, or if our family would be able to weather an unexpected medical emergency should my father lose his job.

Feeling utterly hopeless, I prayed that another plant would be closed instead of my father’s plant. Ultimately, my father’s factory remained open, but others nearby were shutdown.

At the time, I believed my prayers were in the best interest of my family’s short-term security and long-term stability. My parents worked hard to provide for us and played by the rules; hadn’t we earned the right to be economically secure? In hindsight, I was, in effect, making the same judgment call that families in The Briefcase are asked to make: to determine whether the very real struggles and economic hardships of their own family supersede the dire financial circumstances of another family.

When I first learned about the premise of The Briefcase, I immediately thought of those workers whose families were supported by the automotive industry until they received that pink slip. More specifically, I think of their children, who, like me, may have also prayed for the security of their parents’ or caregivers’ jobs but whose lives were upheaved.

Pitting struggling Americans against one another is nothing new in the United States; the distinction between the so-called “undeserving poor” versus the “deserving poor” has long dictated policy debates on how to most effectively address poverty in America. What’s more, the pitting of struggling Americans against one another is reinforced by our current economic policy and budget debates.

At the federal level, we see struggling Americans pitted against one another through draconian, self-inflicted budget caps that pit critical domestic spending priorities—such as job-training programs, affordable housing, and school funding—against one another. At the state level, we see lawmakers categorizing the “deserving poor” and the “undeserving poor” by passing measures such as mandatory drug testing and work requirements for people who need cash assistance. Further, we make struggling families jump through hoops that aren’t required of other people who receive government assistance.

Rather than dedicate attention to television programming that perpetuates damaging stereotypes of the “deserving poor,” the American public should devote its collective conscious to supporting policies that would lift these families out of economic hardship. Policies like increasing the federal minimum wage, enacting paid sick days legislation, expanding Medicaid in all states, investing in high quality preschool programs, and reining in America’s skyrocketing college tuition costs are just some of the many ways we can help elevate struggling American families. Maybe then these families wouldn’t need to resort to the exploitive parameters of CBS’s newest primetime addition.

In its promotional video, The Briefcase rightly points out that “across America, hardworking middle-class families are feeling the impact of rising debt and shrinking paychecks.” But by exploiting the very real and painful struggle that accompanies financial hardship, The Briefcase does a disservice to America’s working- and middle-class families by billing their suffering as primetime “entertainment.”