South Pasadena, where I live, looks like the archetypal suburban American dream. Craftsman houses from its tree-lined streets were featured in thirtysomething and Back to the Future, to name just a couple of the town’s many screen cameos. And just a little way down our road, there’s a darling little house that’s frequently used in TV commercials. The film crews, craft services, and costuming trucks with their racks of garments were an amusing novelty at first. I particularly enjoyed the Christmas commercial, fake snow covering lawns while the sun shone down on yet another perfect 73-degree Los Angeles day. But then it got to be a drag, all those large vehicles parked up and down the road. The telegenic image of our street as an ideal neighborhood was detracting from the reality.

These mildly aggrieved thoughts flickered through my mind while listening to Ernest Hood’s Neighborhoods, a gorgeously tender sound-portrait of the all-American suburban idyll, originally released in 1975 but now lavishly reissued as a double-disc vinyl set by Freedom to Spend. Woven out of plangent ripples of zither, wistful synthesizer refrains, and children’s voices field-recorded by Hood in the streets of his own neighborhood in Portland, Oregon, the album can’t help reminding you of Mister Rogers’ Neighborhood, Sesame Street, and the halcyon mood, if not the sound, of Vince Guaraldi’s jazzy Peanuts score.

The only album Hood ever released, Neighborhoods is considered by some to have invented ambient music a couple of years before Brian Eno. “Musical cinematography” was Hood’s own description in the original liner notes. “It’s like watching a movie—you get establishing shots, and you’re pulled in,” says his son Tom Hood by phone from Southeast Portland, where he still lives. “In that sense, it’s not ambient, because with that you’re meant to tune out, but Neighborhoods makes you focus.”

Each track on the album is evocatively titled—“Saturday Morning Doze,” “The Secret Place,” “Night Games”—and comes with an impressionistic description designed to trigger mental movies, like the reference to “cards flapping in the bike spokes” in the text for “After School.” Sometimes the sense of place is extremely particular: Hood’s “caption” for “From the Bluff” mentions Portland’s Oaks Amusement Park and the “distant marshes” of the Willamette River. Layer upon layer of nostalgia enfolds the record: It was partly inspired by Hood’s memories of his own pre–World War II childhood in Charlotte, North Carolina, but it also features snippets of his 4-year-old children recorded in 1950s Portland. Playing Neighborhoods today only adds extra layers: The charmingly dated synth is redolent of 1970s PBS, while each listener will affix personal memories date-stamped to the period of their own childhood years and linked to their hometown in other states or countries.

Hood was a professional musician who played guitar in jazz bands until polio—which he contracted in the late 1940s while still a young man—made the touring lifestyle unworkable. He carried on doing session work and briefly ran a Portland jazz club, but increasingly his energy was dedicated to the obsessive documentation of everyday soundscapes. Even before reel-to-reel tape machines became readily available, Hood used an earlier technology, the wire recorder—a machine that captured sound by magnetizing points on a thin steel wire. He recorded birdsong and frog noises and would give tapes of outdoor sounds to people who were ill and couldn’t leave their homes. He had a particular obsession with the sonic ambience of covered bridges and would make expeditions to record and sketch Oregon’s surviving examples. Tom Hood recalls making a pilgrimage with his father to the latter’s hometown in North Carolina and recording the entire road trip. He is currently combing through his dad’s vast, unruly archive, digitizing tape reels with a view to possible future releases. 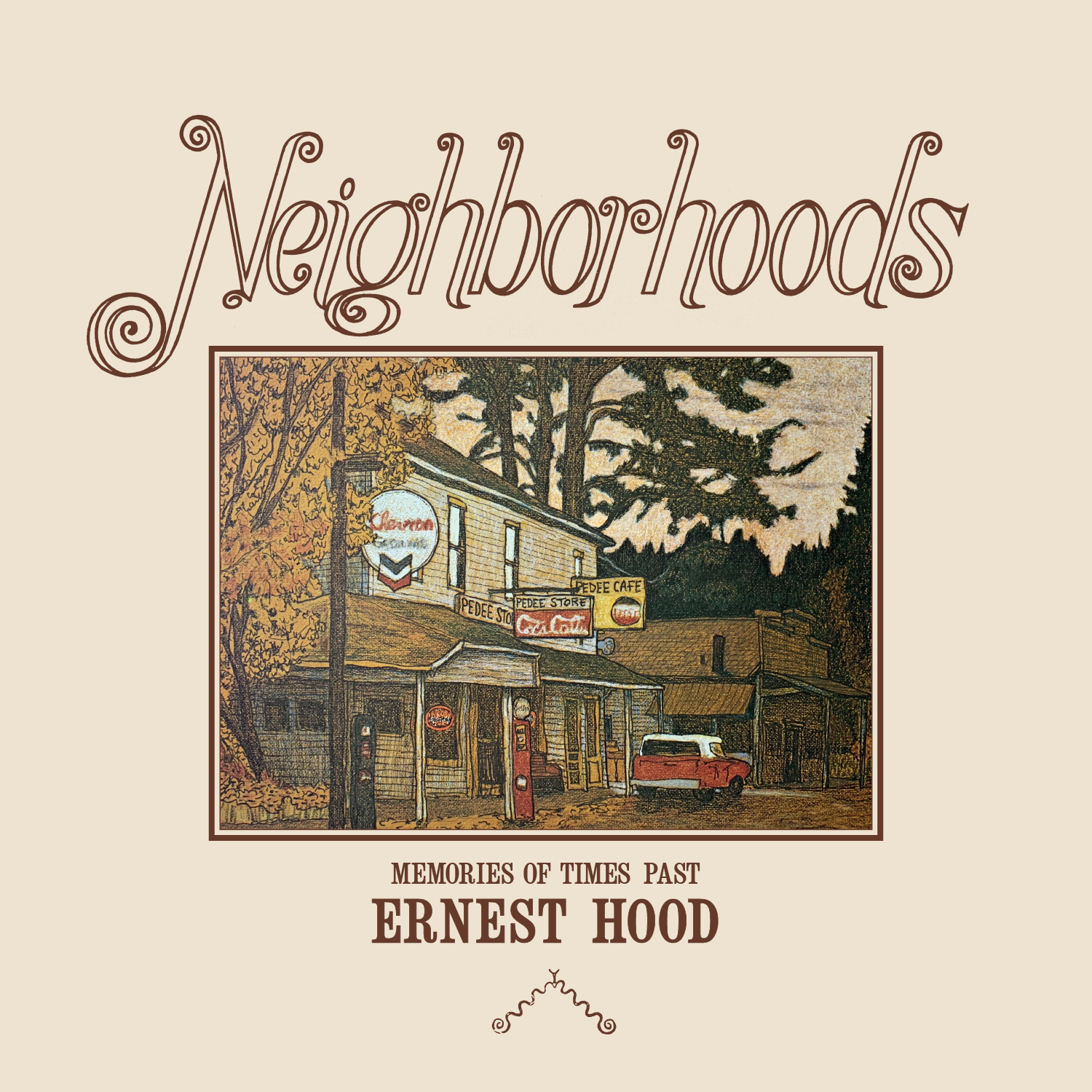 Hood’s preservationist impulse seemed to stem in part from an acute susceptibility to nostalgia. This pained awareness of the passage of time also expressed itself through a hostility to the modern world’s noise pollution. He wrote letters to local newspapers complaining about the assaultive properties of contemporary music. A flavor of this invective can be gleaned from the Neighborhoods liner notes, which rail in passing against “commercial music purveyors” and “plastic novelty music played on military weapons.” One of Hood’s pipedreams was a low-power, small-radius radio station that would play 1920s and ’30s music, carefully leaving 30-second gaps between each 78 rpm platter to allow for proper musical digestion. That never transpired, but Hood did help found the volunteer-run local radio station KBOO FM, to which a portion of the proceeds from the Neighborhoods reissue will go.

Hood strikes an “It takes a village” note when he writes about how the record will trigger pangs in listeners no matter the neighborhood they “sprouted” in and describes the project as paying “a debt to some beautiful and loving people…older folks…who put up with my childhood pesters [and] played such an important role in the formation of comfortable memories.” Hood emphasizes that while the record is not something to play in gregarious situations like a party, “it is a social record in that it reminds us of the fact that most of us made our first social contacts…in our neighborhood streets.”

Reading Hood’s words while listening to his shimmery cascades of electronic instrumentation, which often have the flashback feel of a cinematic dissolve, I wondered to what extent the close-knit, placed-based nurturance that Hood celebrated still applied. I also wondered if I’d ever experienced anything like it. Britain (where I was born and raised) has its romanticized myths of working-class community: a sentimental folk memory of housewives chatting over garden fences in back of terraced housing, next-door neighbors popping round to borrow cups of sugar, and so forth. But once you go up the class ladder, self-contained privacy becomes the norm. As their descriptors imply, semi-detached and detached houses indicate a weakening of the social bond. That’s what it was like where I grew up, an English commuter town surrounded by fields and woodlands but close to London: People were civil but largely kept to themselves.

Ascend more rungs and you reach the super-rich, who lead completely deterritorialized lives thanks to their multiple homes and cunning ways to avoid paying taxes in the places through which they pass. Privilege is measured by the extent to which you can avoid public space and public transport (private planes and private elevators). You can live as though the humans immediately surrounding you do not exist. Hence the vogue in the posher parts of London for the ultra-wealthy to expand their properties underground, excavating subterranean floors for swimming pools and gyms, blithely disregarding the noisy and dirty disruption caused to everyone else in the street by the building work. The ultimate assault on the idea of “neighborhood” is owning a property without living there, ghosting out an abode as a vessel for investment while pricing regular folks out of the area. If rootless transience—a nomadic lifestyle that mimics the free movements of international capital—is privilege, then conversely, it’s those at the bottom who are most territorialized, literally kept in their place.

Class is a factor but so is age. Young people who move to cities are partly attracted by the freedom of dislocation, the chance to escape the bonds and binds of belonging to a community. As a 20-something living in London in the 1980s and ’90s, I recall being barely on nodding terms with neighbors in the various apartment blocks or subdivided houses in which I lived.

The neighborhood as an extension of family that the aptly named Hood celebrated seems to exist largely for children. Certainly, it was as a child that I remember it as a social fact in my own life: You played with whomever was near to hand. And it was only when I had children myself that I really started to feel like I lived in a neighborhood. That was in the East Village in New York City, a place that would otherwise seem to represent the ultimate in disconnection. Yet both within our 12-story apartment-block co-op and in the surrounding streets, there was a pleasant sense of community. Children were the glue, or rather the dissolving agent, in terms of interpersonal boundaries. You talked to people with whom you might not have much in common simply because your kids played together. Halloween provided the treat of peering inside the apartments of people on other floors. Compared with the East Village’s jostling intimacy, suburban LA is diffuse, although PTAs, Little League, and “home churches” counteract the centrifugal tendencies of a spread-out, pedestrian-unfriendly city.

Although the freedom for kids to wander around their neighborhoods—which some of us still enjoyed in the 1960s and ’70s—has been largely curtailed by anxious parents, small children still have that here-and-now, face-to-face orientation. But as soon as they get smartphones, bonding systems emerge that are steadily less related to geographic proximity. They start to resemble adults, with friendship systems organized around tastes or interests. My own “true” neighborhoods for some time now have been unmoored from real space and real time: Internet-based forms of conviviality and parochialism oriented around musical or intellectual concerns, gathered around blog clusters or message boards. A while back I started jokingly addressing the readers of my own blog as “parishioners.” And it would have been through a music-sharing blog or an online collective audio archive that I first heard Neighborhoods some years ago.

Originally released on Hood’s own Thistlefield imprint in an edition of a few hundred, offered for sale through mail orders at $5.95 but mostly given away to friends, Neighborhoods gradually found its true audience as it circulated in used record stores and then reached the Internet. Hood died in 1991, long before he could see the rediscovery of his one and only album. I don’t know if he would recognize file-sharing as a form of neighborliness. But he would surely have felt delight and vindication at its long and winding ascent to cult legend.