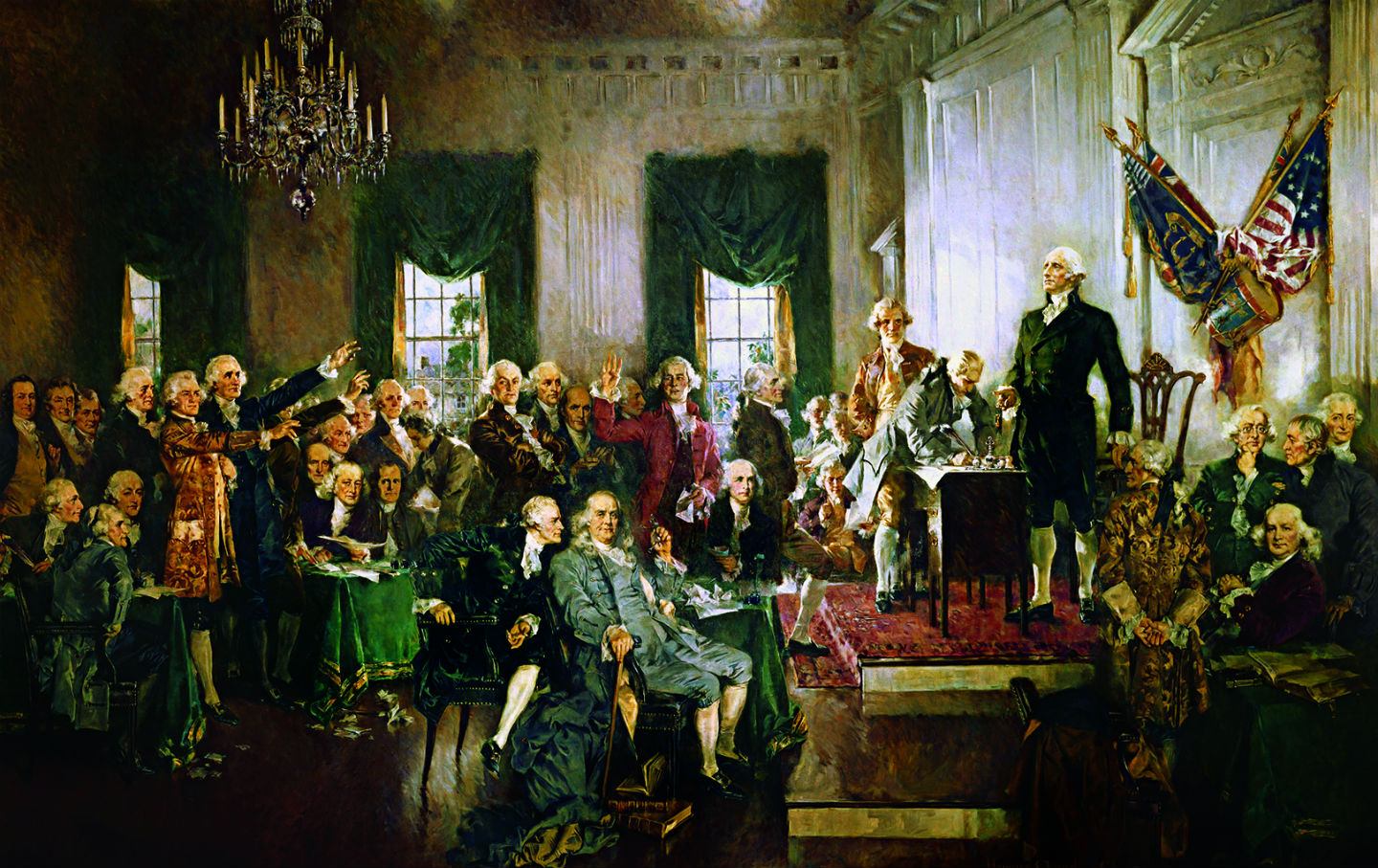 “Scene at the Signing of the Constitution of the United States”, Howard Chandler Christy, 1940

Simeon Strunsky
This appeared as an unsigned editorial in the January 21, 1915 Issue

Radical thought some time ago came into possession of a new pocket-knife. It is called “the economic interpretation of history,” and the havoc it has wrought among fine old parlor furniture is a caution. There is a document known as the United States Constitution which people were in the habit of referring to with extreme deference. We know to-day that the Constitution is a scheme devised by a land-holding and rum-selling oligarchy for the enslavement of a democracy. There was a group of people and an epoch commonly described as the Fathers. We know to-day that they were not parents to be proud of. There was a war known as the War of Independence, reputed to have been fought by patriots. We know to-day that it was a war fought for privilege by tax-dodgers. George Washington, a land-speculator; Hancock, a smuggler; Robert Morris, a bond-scalper—it has been a busy little pocket-knife.

But the parallel with the small boy is not perfect. The small boy chips and slashes without animus, whereas radical thought and radical youth hack away at the past in a frenzy. Once upon a time the radical thinker was not much concerned with the Past; it was dead and did not matter. But in fighting the battles of the present the Radical discovers that the past does matter; it is not dead; its heavy hand lies on us and the roots of our thoughts and actions run back through the centuries. The Fathers in their graves stand in the way of a great many desirable things of the present. Therefore they must be shown up. The movement once under way, impetus does the rest. There ensues a chronic state of irritation with the past, a chronic suspicion that the past was just the opposite of what patriotic sentiment has usually pictured.

It is all the more curious that the present-day revolutionist should be so merciless to the past when one considers how fatally the same interpretation can be applied to his own case. If the American Revolution was fought for land-grabbing and crooked finance, if the Protestant Revolution was merely an expropriation of the Church, if the French Revolution was an assault on ecclesiastical revenues, what will prevent the historian of the  year 2050 from describing the social uplift movement of 1915 as primarily engineered by young men and young women of the middle classes in search of jobs as investigators and research directors, and the Socialist party as made up of lazy factory hands, grafting walking delegates, and ambitious lawyers?

Simeon Strunsky (1879–1948), born in Belarus, wrote frequently on literary themes for The Nation while on the staff of the New-York Evening Post.

Twilight of the Idols

What Einstein did for physics, Joyce for literature, Picasso for painting, Charles A. Beard did for the study of American history. Our government was designed not by a brotherhood of selfless guardians of the common weal, Beard argued in An Economic Interpretation of the Constitution of the United States (1913), but by a cabal of the fabulously rich. They hastened to Philadelphia in the summer of 1787 not to solemnize “the union of freedom with strength and order,” as the received wisdom had it then (and, less excusably, often has it now), but to protect their own power and property and privilege and prestige. “The direct, impelling motive” for the adoption of the Constitution, Beard concluded, “was the economic advantages which the beneficiaries expected would accrue to themselves first, from their action.”

That reappraisal shattered American complacency about the past and, by implication, about the present and future as well. What hope could there be for “square deals” with a deck stacked in favor of the house? Two years later, Simeon Strunsky was still reeling, complaining in these pages (which then catered to scholars and gentlemen) that someone had been messing around with the “fine old parlor furniture.” Despite his objections, the parlor has been in disarray ever since.

Long forgotten, Strunsky was a prolific and brilliant satirist—he was literary editor of The Nation’s then–parent publication, the New York Evening Post—whose witty conservatism soon mellowed into a bland celebration of all things middle-of-the-road. Naturally, he found a home at the editorial pages of The New York Times. But twenty-five years later, Strunsky was still trying to neutralize the challenge Beard had posed. “If in the conquest of a Continent it turns out that there has always been what our candid vocabulary today calls pillage and speculation and land-grabbing,” Strunsky wrote in The Living Tradition (1939), “it puts in better light the pillagers of any one period.”

Liberals today ridicule the Tea Party’s crude take on American history—which Strunsky’s words evoke—as obviously bowdlerized and wrong. But An Economic Interpretation shows why it is no accident that Constitution-worship has always been the first and last resort of homegrown scoundrels. “The system isn’t broken. It’s fixed,” read a sign at last year’s racial-justice protests. Charles Beard will be there waiting should “radical thought and radical youth” summon the courage to interrogate that last great golden calf: the legitimacy of the Union itself.