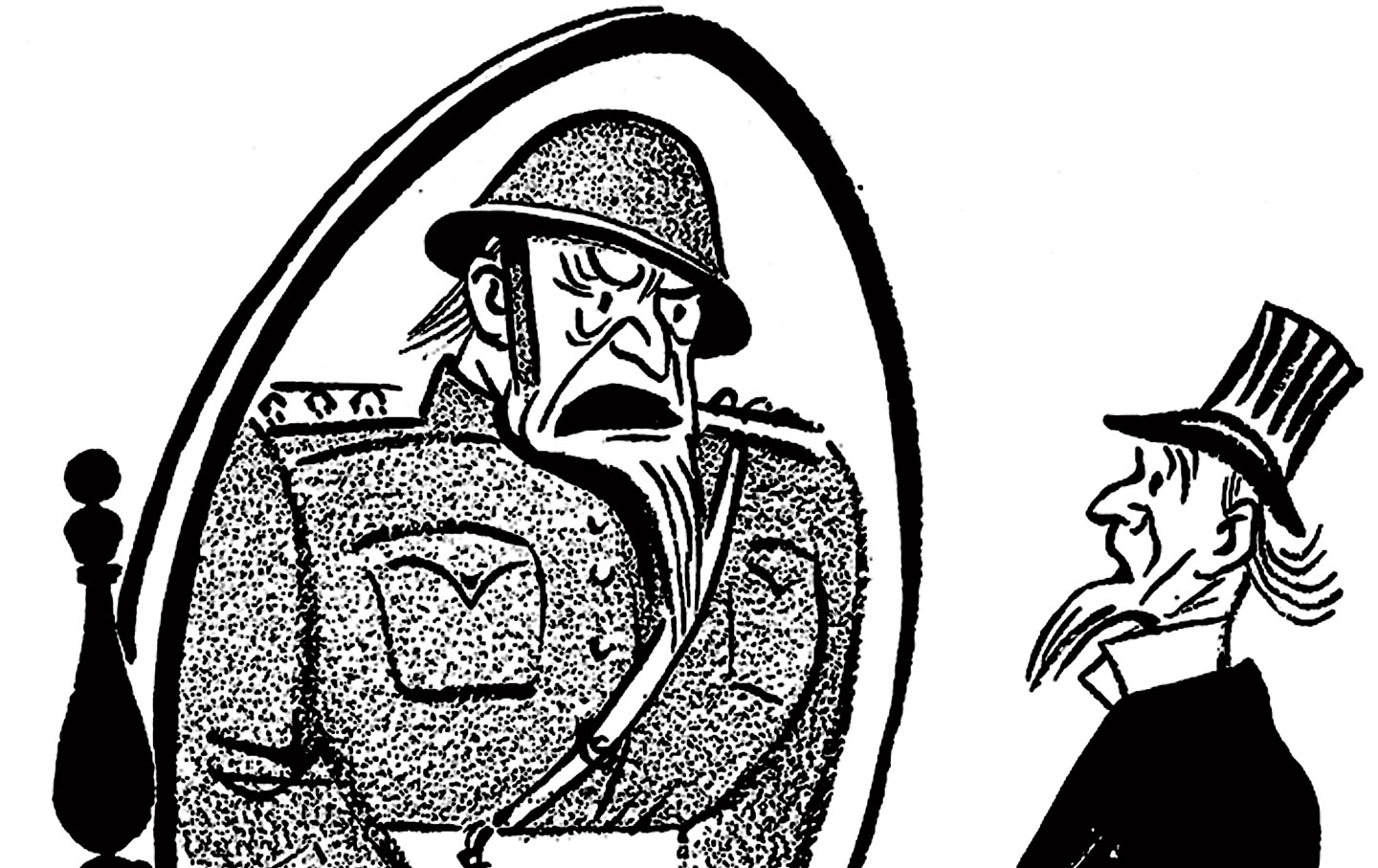 “What we have here is a sort of gouvernement crépusculaire—a twilight government,” said the French colonel in charge of the Pacification Bureau in Hanoi. “In our own area we control the cities and major roads from daybreak till nightfall. Thereafter the Vietminh has the country to itself to levy taxes, attack our posts, and execute the ‘Vietnamese traitors,’ that is, the Nationalists who still profess to believe in victory for our side.” Such is the situation in war-torn Indo-China. After more than seven years of bitter fighting France has spent twice as much on the Indo-China war as it has received under the Marshall Plan for its own rehabilitation, and America has furnished much more military and economic aid—calculated on a per capita basis—than it ever gave to Chiang Kai-shek’s Nationalists.

Politically, the situation looks even more hopeless for the West. France has not succeeded in convincing the Vietnamese that it will make good its promises of full independence. At the same time the Vietnamese Nationalist government, by its accumulating psychological mistakes, has been divorced not only from the mass of the farmers but from its most promising military cadres. As long as the military situation had not too seriously deteriorated, and as long as the Chinese Communists were committed in Korea, the possibility of a political solution of the Indo-China conflict was pushed into the background by everyone concerned. Now, however, the French are obviously eager to stop the fighting in any way possible. There can be no doubt that the United States has already considered what course it would take in the event of the loss of Vietnam. It is certainly not by sheer coincidence that General Donovan, wartime O.S.S. chief, is now ambassador to Thailand.

If a cease-fire could be arranged, the most promising next step would seem to be the establishment of an intermediary government. The West would still have a number of trump cards in Indo-China which the Soviet bloc could hardly match. Massive economic aid might swing the balance, and substitute for the total loss of Indo-China in a creeping war the building up of a neutral regime.

Any solution that accomplishes the neutralization of Indo-China would be more desirable than this hopeless stalemate in the jungle swamps. We need have no illusions about Ho’s regime. It is of course Communist-dominated. But so is the U.S.S.R. and its satellites, with whom the United States, and France, maintain normal diplomatic relations. A farsighted policy based on well-administered aid might do more to stem the Communist tide in Southeast Asia than sending a few technicians or a few additional plane-loads of napalm.

Bernard Fall (1926–1967) first traveled to Indochina in 1953. Carey McWilliams writes in his memoir that he had received “a tip…that this remarkable young scholar might have some important things to say about Vietnam.” Fall was killed by a land mine in Vietnam, and the last book of his that was published during his lifetime was Hell in a Very Small Place: The Siege of Dien Bien Phu (1966).

Lost on the Street Without Joy

At the time of his death in 1967, Bernard Fall was the leading authority on the French and American wars in Vietnam. He had written seven books and some 200 articles in fourteen years, including his classic account of the battle of Dien Bien Phu, Hell in a Very Small Place. Valued for his deep knowledge and acute analysis, he taught journalists, antiwar intellectuals and thoughtful military officers the political and military realities of Vietnam. No one had more experience with the two wars than he did, or saw them as clearly.

The Nation’s editors did well to find Fall in 1954. “Solution in Indo-China,” which appeared when he was an unknown graduate student who had just returned from his first trip to Vietnam, must have been one of the first articles he ever published. It concerned a central event in modern Vietnamese history, and Fall was his usual prescient self.

In early March of that year, just a month before the Geneva Conference on Korea and Indochina, Fall described the political and military situation in Vietnam and looked at the possibilities for ending the conflict. He rejected the idea of a permanent partition of Vietnam in favor of establishing a single national government. A Vietminh regime, he predicted, would seek independence and neutrality, as Tito’s Yugoslavia had.

Fall’s proposal flew in the face of the prevailing US attitude that Ho Chi Minh was nothing more than an agent of international communism. The Geneva Accords, approved by France, Britain, China, the Soviet Union and the Vietminh, allowed for the solution that Fall envisaged by establishing the seventeenth parallel as a temporary demarcation line for the French withdrawal and mandating an election for a national government in 1956. But Secretary of State John Foster Dulles refused to approve the agreement, and the Eisenhower administration immediately began to build up an anticommunist regime in the South. Only after another disastrous war did policy-makers learn that Fall was right: the goal of Ho Chi Minh’s revolution had always been independence.

Fall went to Vietnam almost by accident, yet his whole life had prepared him for it. Born of an Austrian Jewish family in 1926, he emigrated to France with his parents after the Anschluss, and at 16 joined the French Resistance. His father was captured and murdered by the Gestapo, and his mother was sent to Auschwitz. Fall survived to join the First French Army and was wounded as it fought its way into Germany. After a stint as a researcher for an American prosecutor at the Nuremberg trials, he went to university, first in Paris and then in Munich. In 1951, he accepted a Fulbright scholarship to study political science at Syracuse University. After a professor encouraged him to do research on the Indochina struggle, about which there was little scholarship, he financed a trip with his own small savings and soon found himself involved in what he later called “a bad love affair” with Vietnam.

As a French reserve officer, Fall had special access to the French command and natural sympathy for the French army. Yet he was able to maintain a critical distance. When a commander claimed that the French controlled most of the Red River Delta, Fall studied the village tax rolls and found that most of the villages had not paid taxes to the French-backed government for years. The Vietminh, he estimated, controlled 70 percent of the delta outside the cities. His doctoral dissertation, written after his return to the United States, was likely the first scholarly study of Ho Chi Minh’s government.

Fall took a professorship at Howard University, and in 1957 he went to Saigon to conduct fieldwork on administrative reform in the government of Ngo Dinh Diem. Many in Washington respected his expertise, and officials at the International Cooperation Administration, the predecessor to the Agency for International Development, wanted to use it to reform the antiquated colonial structures in Saigon and Phnom Penh. The following spring ICA offered, and Fall accepted, a contract to teach for a year at the Royal School of Administration in Cambodia. Two days after he signed the contract, he gave a lecture at the Association of Asian Studies in New York that The Nation published, in part, on May 31, 1958.

In that piece, titled “Will South Vietnam Be Next?”, Fall reported on the growing insecurity in the countryside and the economic deterioration exacerbated by the American aid program. By funding imports of commercial goods rather than investing in the local economy, he wrote, the US program was putting people out of work and creating ever-greater dependence on foreign aid. The United States could not afford to neglect the landless farmers and the jobless workers, Fall concluded, because it was they who had made up the shock troops that defeated the French at Dien Bien Phu.

ICA abruptly dropped Fall’s contract. He supposed that the South Vietnamese embassy official who attended his lecture had brought pressure on Washington. But in 2011, the National Archives released a telegram that showed the matter had gone up to the highest levels of the State Department. Signed by the director of Southeast Asian affairs and stamped “DULLES,” it noted that “Fall has been [a] consistent and vocal critic [of] U.S. policy, and in recent months has made public statements extremely critical [of the US] aid program [in] Vietnam.” Clearly, top US officials—if not Dulles himself—had read the Nation piece.

Fall became persona non grata in Diem’s South Vietnam and never worked for the American government again. But that was not all. Shortly afterward, the FBI began following him and questioning his friends and contacts. J. Edgar Hoover apparently thought he was a French agent.

In 1961, Fall published his major work on the French war, Street Without Joy, in which he argued that the nature of the conflict was political rather than simply military and described the trials of the French soldiers in vivid, human terms. Praise for the book appeared in US military journals, and the commanding general at Fort Bragg, who was training the elite Special Forces for counterinsurgency warfare in Vietnam, often invited its author to lecture. Four decades later, the book reappeared on the reading list for officers during the Iraq War.

Endorsements from military men often made antiwar activists uncomfortable with Fall, but by 1962 he had become convinced that the US experiment was over, and that the best thing for the South Vietnamese would be a negotiated peace. FBI surveillance then picked up in earnest. Attorney General Robert Kennedy approved Hoover’s request for a tap on Fall’s phone and a microphone in his house. FBI agents succeeded in intimidating most of Fall’s friends and contacts in the US government. But they finally had to end the surveillance—not just because they found no evidence that he was gathering intelligence for the French, but because too many important people in Washington had begun to consult Fall as the authority on the war.

After the American regular forces entered the war, Fall went to South Vietnam every year, often going out on operations with American troops. In The Nation and other publications, he wrote that the United States, with its overwhelming firepower, could not lose the war, but because it had lost the political struggle, it could not win it either. By the end of 1966, he felt strongly that the United States had lost sight of Vietnam itself, and that the war had become a general test of advanced military technology against guerrilla movements—that the proper analogy was not Munich but Spain.

In February 1967, Fall, at the age of 40, was blown up by a land mine on the narrow strip of coastland north of Hue that the French soldiers had christened the “Street Without Joy.”