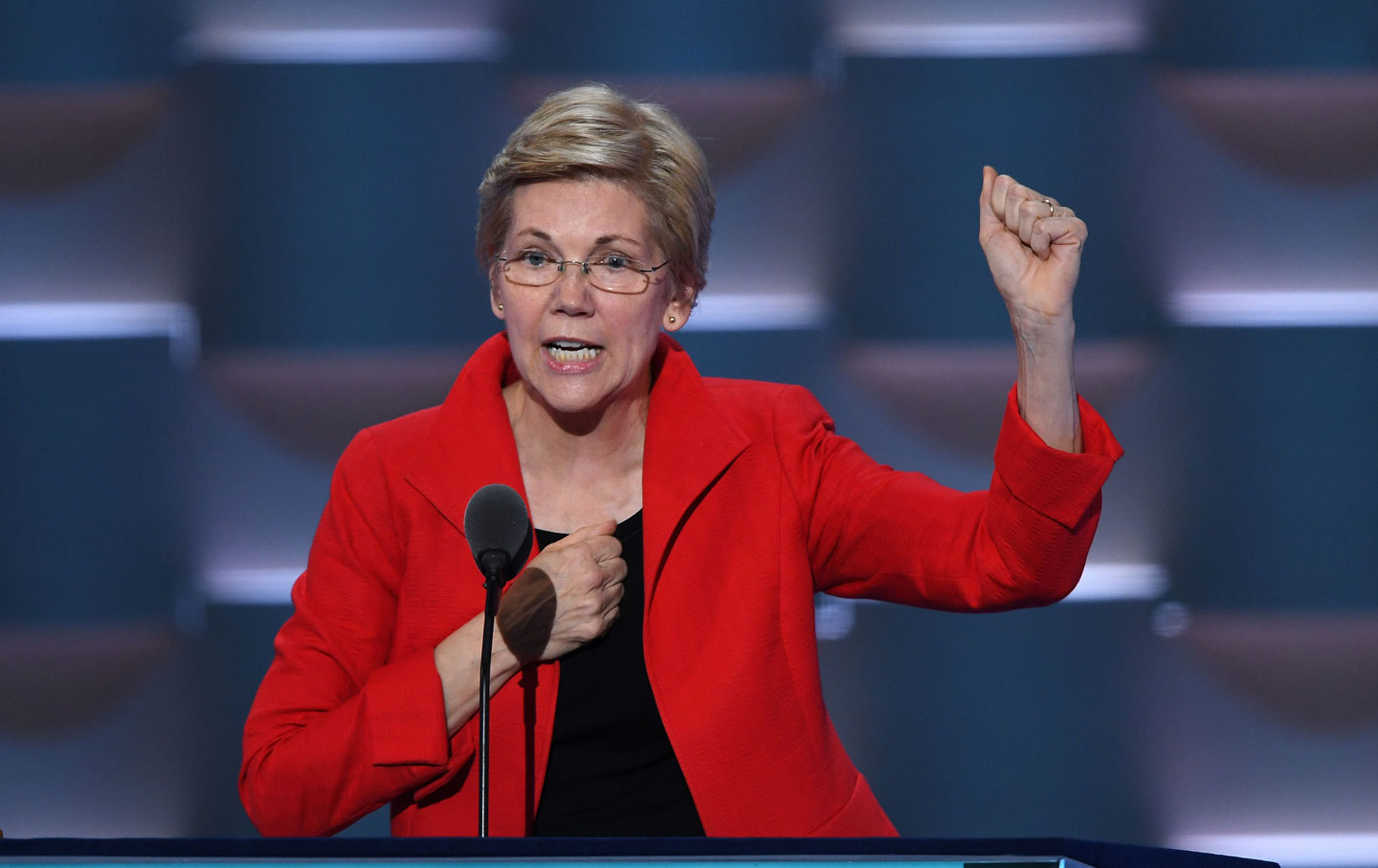 More than a decade ago, Al Gore implored Americans to take action to confront climate change. “Future generations may well have occasion to ask themselves, ‘What were our parents thinking? Why didn’t they wake up when they had a chance?’” he asked. “We have to hear that question from them, now.”

On Tuesday, for over half an hour in a ballroom several miles from the Democratic National Convention in Philadelphia, Senator Elizabeth Warren, also armed with a slick slideshow, laid out her pitch for fixing a badly broken economy.

“There’s some things we need to talk about that you can’t get into five minutes, 15 minutes, or 144 characters,” Warren told The Nation. “I was just hoping for a little bit longer arc of time, where I could do a little bit more in-depth discussion about where the economy is now, why it is where it is and what it is we can do about it.”

Warren has given this presentation a few times, and will continue to deliver it to audiences around the country. It’s a natural fit for a longtime professor at Harvard. “Remember, I was a teacher for a whole, whole, whole lot longer than I have been in any kind of political life,” she said. “The work that I was presenting, much of it really starts with my academic work. Stuff I have been working on for years and years and years.”

The major focus of Warren’s pitch is fixing the growing divide between the rich and the poor in the United States. “The story is pretty unambiguous,” she explained. “The reason working people are in financial trouble is not because of irresponsible financial decisions, it’s because of much larger economic forces. It’s because of an economy that no longer works for America’s middle class, for America’s working families, for people striving to pull themselves out of poverty.”

This runs counter to the conservative myth that wasteful spending is the cost of our economic issues. While cost of living has skyrocketed, Americans have compensated by spending less on food, less on clothing, and less on appliances.

Warren makes the case that these changes are clearly the result of deliberate policy choices, designed to benefit the wealthy and powerful. Though his name was not mentioned during the presentation, Ronald Reagan clearly loomed large.

“Some change begins to happen in the mid to late ’70s, some of it carries over into the ’80s, but 1980 is a good demarcation point because, it’s right around 1980, around the time Ronald Reagan is elected, you see this shift in government,” she said, including lowered tax rates on the wealthy, widespread deregulation, and decreases in domestic non-military spending. Warren noted that there’s now a whole generation who only knows this type of economy.

A government that actually worked, according to Warren, would base policy choices on fundamental questions. “Does it help for middle-class families? Does it create more opportunity for working families to expand? Does it create openings for poor people?” she said. “Those have been the measures from about 1935 to 1980.”

But for the nearly the last four decades, “the new measure becomes trickle-down economics. Does it help those at the top?” This was based on “the underlying theory [that] the way to build an economy was to help those at the top and then hope that wealth will then trickle down to everyone else.”

“The theory,” Warren said, “never made any sense, and now we have 35 years of evidence that the reality is that it didn’t make any sense.”

The crux of her presentation is not a recitation of problems, but instead a search for solutions. For that reason a critical element of Warren’s analysis is not simply based upon economics but also on power and influence in Washington, DC.

“The system has been corrupted because those with money and power have figured out that if they can influence just a handful of senators and representatives in Washington, they can wreak enormous wealth from it,” she said.

But it’s not just contributions, Super PACs, and lobbyists. Warren attacked the policy-making infrastructure—think tanks, public-relations firms, and other operatives who work under the radar but have a corrosive impact on our democracy.

“We can’t talk about agriculture policy without being overwhelmed by so-called independent experts who want to come in and give their views on every narrow aspect of it,” Warren said. “We can’t talk about banking policy without being overwhelmed by PR firms coming in, usually with some local banker in tow, to try to tell some story about how reining in big financial institutions is going to mean that the corner bank is going to get hurt and that means the corner drug store can’t get the financing it needs.”

“It’s everywhere,” said Warren, “You cannot believe how much money is being spent to try and influence one hundred senators,” she said, adding, “There is no disclosure for much of this money.”

To Warren, Washington is “more deeply beholden to a handful of lobbyists and think tanks and political contributors then they are to the American people.”

That’s a much more grim view than anything said from the stage at the DNC this week. But Warren does retain some optimism. “Part of the message here is to make the point that, while the other side may have all the money and power, on our side we’ve got the voices and the votes, and if we use them we can change this government,” she said.

In her conversation with The Nation, Warren also expanded these plans to include infrastructure investments, which would include roads, telecommunications infrastructure, and clean energy, along with significant new investments in research. According to Warren, these are “the kinds of things that help us create a future.”

The immediate counterargument in Washington will naturally involve paying for all those plans. But Warren proposes closing tax loopholes, like the tax break for bonuses which she claims would raise $55 billion in revenue over the next ten years.

With this money, “We could refinance nearly all of the student loans that are currently outstanding and reduce costs for who are struggling,” Warren said. “We could give a raise to seniors living on social security and veterans and people with disabilities. A raise about the same size America’s CEO’s got last year.”

Slideshows are nice, but Warren knows raw political power is needed drive progressive change during the next administration.