In 2015, the seventh year of Barack Obama’s presidency, the United States saw $4.7 trillion worth of corporate mergers and acquisitions—an all-time high. Though Obama did pick some high-profile fights with mega-companies that were trying to merge, his administration barely surpassed the number of antitrust cases brought to trial under George W. Bush, who set a record for bringing the fewest of any president.1

But when congressional Democrats unveiled their “Better Deal” platform last summer, it contained a whole chapter on “cracking down on corporate monopolies and the abuse of economic and political power.” The document, which Democrats aim to use as a blueprint for the 2018 midterm elections, calls for tougher treatment of corporate mergers and a new government “Trust Buster” position that will look closely at existing concentrations of economic power and demand that regulators take action or explain why they won’t. “In recent years,” the platform declares, “antitrust regulators have been unable or unwilling to pursue complaints about anticompetitive conduct.” It was a rare rebuke to Obama’s record, reflecting a shift in Democratic thinking on monopolization.2

Listen to George Zornick discuss his interview with Elizabeth Warren on the Start Making Sense podcast.

Senator Elizabeth Warren has been helping lead the party’s new approach to antitrust enforcement. She outlined this agenda during a speech to the Open Markets Program back in the summer of 2016 and has been a harsh critic of President Trump’s approach to antitrust enforcement as well. In late January, she spoke with The Nation’s Washington editor, George Zornick, about how large monopolies affect the economy and what Democrats are planning to do to address the problem.3

George Zornick: I imagine that, to many people, “monopoly power” sounds like a pretty distant concept. They don’t care how Robert Bork once interpreted antitrust law. So how do you explain it to your constituents and convey the effects to them?4

Elizabeth Warren: This is about whether our markets are fair and open to everyone, or if they’re just places for the biggest and wealthiest corporations. I believe in markets. But markets work only when everyone gets a fair opportunity to compete.5

Zornick: Tell us about what you’ve seen happening in the Justice Department’s antitrust division under President Trump. Are we getting the kind of nominees who might actually take this problem seriously?6

Warren: The Justice Department has not taken this problem seriously for a long time now. Competition has been dying in markets across our economy. Just look at the numbers: Four airlines control over 80 percent of domestic airline seats. Five health-insurance giants control over 80 percent of the health-insurance market. Three drugstore chains have 99 percent of the industry’s revenues. Four companies control over 85 percent of America’s beef market. Two giants sell over 70 percent of all beer in America. That’s a big problem. It’s a problem because, when a few big players control an entire industry, it has devastating impacts on both the economy and our political system. Trump appointees are there to protect the big companies, to facilitate those mergers and acquisitions and growth. They’re not there to protect consumers and not there to make markets truly work.7

Zornick: You mentioned that it’s been a problem for a number of years, not just with the appointees we’ve seen from Trump—how does this concentrated power in the markets affect the political system?8

Warren: When giant corporations have that much economic power, they also accumulate massive political power. They can pour insane amounts of money into electing politicians who will do their bidding in government. It’s no wonder that the biggest companies in America also spend the most on lobbying government officials. It becomes an ugly, self-perpetuating cycle.9

Zornick: Companies like Google and Facebook have become just massive. Are there unique dangers when tech companies get so big and control so much?10 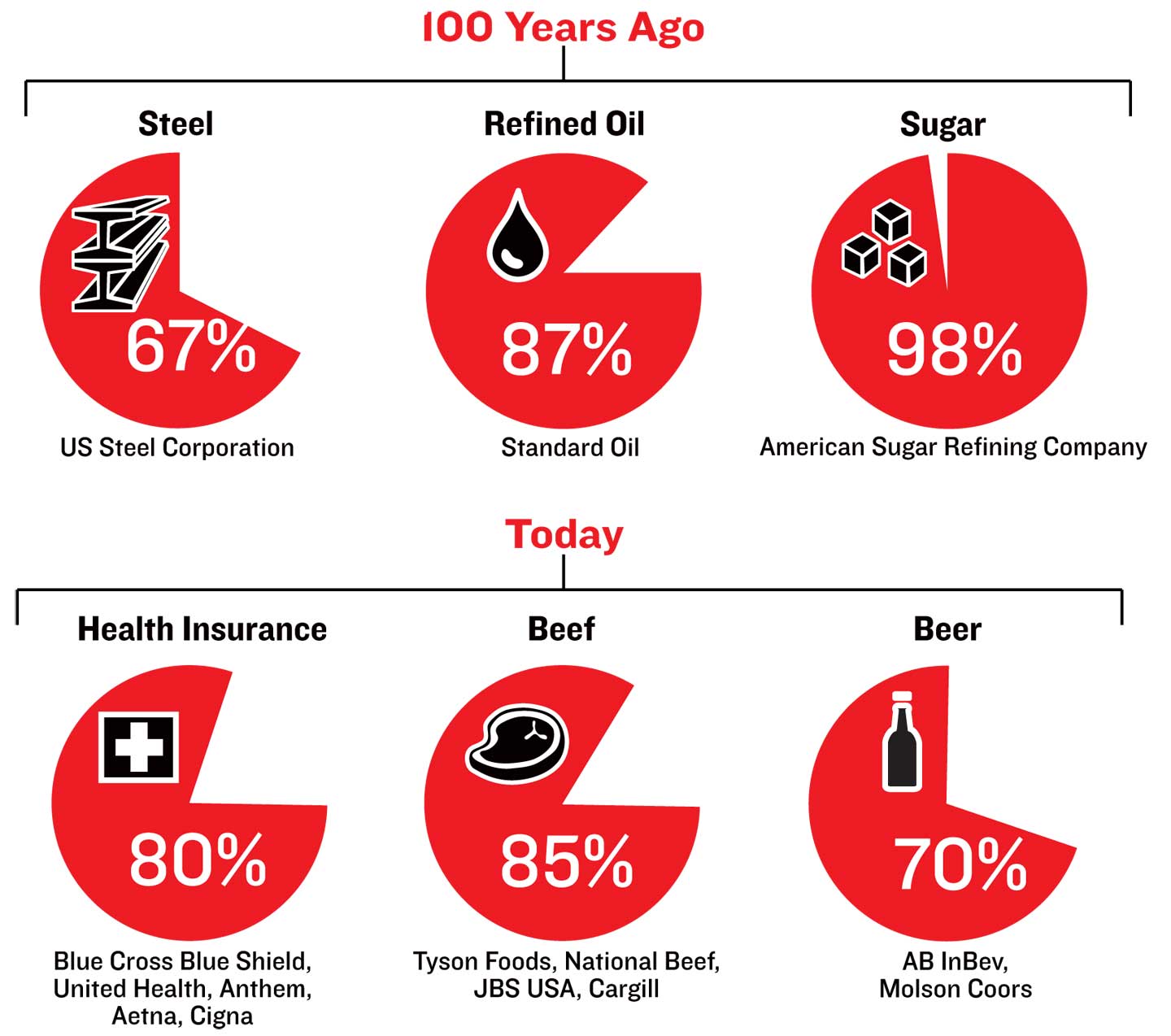 Warren: In many ways, tech monopolies are similar to the oil and sugar and railroad trusts of the 19th century. And antitrust enforcers have the tools to stop tech companies from engaging in practices that choke off competition, but only if they use them. But there’s one key difference between the 19th-century trusts and today’s tech companies, and that’s data. Companies today gather more data on everything from where we work to where we shop, to our political views, to what we eat for breakfast. There’s this belief, when it comes to tech companies, that when people don’t pay up front, there’s no antitrust concern. But that’s a myth. Data is power. And data allows companies to push tailored advertisements to both shape and drive our preferences, and ultimately to benefit the corporation’s bottom line. That’s why it’s critically important that antitrust enforcers focus on the ways data can be used to undermine competition.11

Warren: That’s the risk that we run right now in this country. The antitrust enforcers are supposed to prevent one giant corporation from exercising too much power in a market, whether it’s a market for sugar or a market for ideas.13

Zornick: So what solutions exist here? What would an effective antitrust system look like?14

Warren: The big fight now is to make the Justice Department and the [Federal Trade Commission] and other agencies use the tools they already have to protect competition. I’ll give you three steps that the federal government can take to revive competition: Block anticompetitive mergers; stop anticompetitive conduct; and prioritize protecting competition. These are steps they could take right now. Competition in antitrust enforcement is something that affects all Americans in some way: the prices of things we buy, the wages we earn, the economic opportunities we have. It’s on all of us to make sure that elected officials are holding agencies accountable for protecting competition.15

Zornick: Is there any space for something more aggressive? Say, for example, just going in and breaking up a company that’s too big?16

Warren: Yes, and the government has the tools to do it. What they lack is the will.17

Zornick: So what’s one example where they have the tools and they could do it if they chose?18

Warren: Well, right now, in the communications industry, we’ve seen giant companies that merge and grow and merge and grow, with powerful anticompetitive effects. And yet the Justice Department sits on its hands. Go back to where I started a minute ago: that five health-insurance giants control over 80 percent of the health-insurance market. Four companies control over 85 percent of America’s beef. Two giants control 70 percent of all the beer that’s drunk in America. This is a reminder that these giants touch every American in every aspect of their lives—but also a reminder that it doesn’t have to be this way. It was this way in the 19th century, when a handful of giants dominated individual industries like steel and sugar. But Teddy Roosevelt stepped in and busted those trusts, and competition began to flourish in this country. One or two giants could no longer hold America and America’s consumers hostage.19

Zornick: How would you deal with the political backlash if the government actually came in and forcibly broke up a company—the political fury that would surely follow?20

Warren: No one had done it when Teddy Roosevelt stepped up. And yet the American people supported him. And then antitrust law fell largely by the wayside, until Franklin Roosevelt, during the Great Depression, revived the use of antitrust law. And once again, giant corporations complained loudly. But the people supported the president.21

Zornick: You’ve been one of the leading voices on this issue, but do you think the party as a whole is ready to take these kinds of steps and really make it an issue as we head into 2018, 2020, and beyond?22

Warren: I was very pleased that the entire Democratic caucus signed onto a statement of principle that urged stronger enforcement of antitrust laws as one of our promises to the American people.23