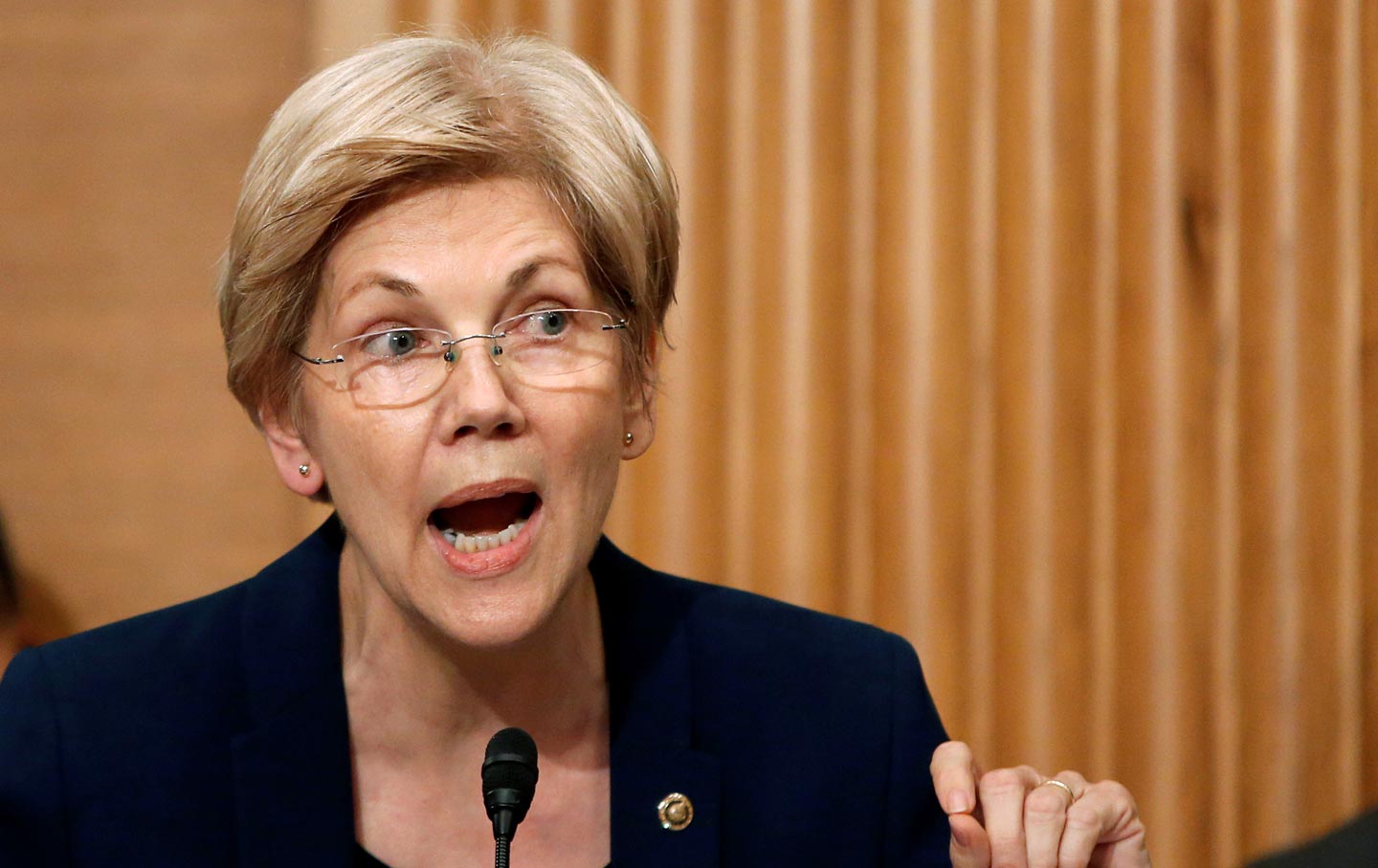 Senator Elizabeth Warren fired an unmistakable warning shot to Hillary Clinton and her advisers on Wednesday, cautioning against appointing cabinet or administration members who are linked to Wall Street while name-checking a firm closely tied to Clinton and the Democratic Party.

Warren’s speech, delivered at the liberal Center for American Progress Action Fund, cast the upcoming presidential election in stark economic terms. She described the tax-slashing, deregulatory approach laid out by Donald Trump and contrasted it to a laundry list of populist economic policies embraced by Hillary Clinton. Clinton has faced criticism recently for focusing too heavily on Trump’s competency and not enough on fundamental economic issues, and so Warren’s speech was well-timed and well-received.

But towards the end of her remarks, Warren noted that “personnel is policy,” and continued:

When we talk about personnel, we don’t mean advisors who just pay lip service to Hillary’s bold agenda, coupled with a sigh, a knowing glance, and a twiddling of thumbs until it’s time for the next swing through the revolving door, serving government then going back to the very same industries they regulate. We don’t mean Citigroup or Morgan Stanley or BlackRock getting to choose who runs the economy in this country so they can capture our government. No.

Citigroup and Morgan Stanley are certainly household names, as two of the top four largest banks in the country. But BlackRock? It’s safe to say relatively few people have heard of the asset-management firm—unless they are in Hillary Clinton’s orbit.

BlackRock’s chief executive, Lawrence Fink, has been repeatedly mentioned as a possible Treasury secretary under Clinton. (“Fink is a natural choice for any Democrat,” one analyst told Fortune earlier this year.) Fink is a major Democratic donor, and has recently been speaking out against “short-termism” in the financial sector, directly echoing a key policy plank of Clinton’s.

BlackRock appointed Clinton’s former chief of staff at the State Department, Cheryl Mills, to its board in 2013, and as David Dayen noted at The Intercept in March, several top BlackRock officials have already been through the revolving door at the Treasury Department—Fink has effectively formed a Treasury-staff-in-waiting at his firm. At least one top BlackRock official, Michael Lyle, was advising the Clinton campaign on economic policy last year. Another senior director, Matthew Mallow, is a “Hillblazer,” meaning he raised $100,000 or more for the campaign.

Warren’s office would not comment whether the inclusion of BlackRock was a direct reference to these ties, but it’s hard to imagine any other reason she would decide to mention the firm. Notably, CAP President Neera Tanden has been tapped as a co-chair for Clinton’s transition team and introduced Warren’s remarks.

Fink has no doubt embraced some worthwhile reforms of the financial sector, like advocating against short-term incentive structures. But BlackRock has a lot to gain from a takeover at Treasury.

In 2014, BlackRock obtained a confidential Federal Reserve presentation that argued the firm—which manages $4.7 trillion in assets—might pose system-wide risks to the economy, and suggested the Federal Stability Oversight Council might designate BlackRock a “systemically important” institution, which would open the firm to a wide array of tougher regulatory requirements.

When BlackRock obtained this memo, it “galvanized the firm around a crusade to elude more aggressive oversight from the Fed,” The Wall Street Journal reported this year. The secretary of the Treasury serves as chairman of the FSOC.

If Hillary were to appoint Fink or any of his underlings to an administration post, it would no doubt spark a huge battle with Warren, who successfully derailed Obama’s nomination of Antonio Weiss for a top Treasury spot in 2014. (Weiss now serves as a counselor to Treasury Secretary Jack Lew.)

Appearing as a friendly force and high-profile supporter, Warren fired a preemptive shot in that battle Wednesday. “You better believe I’m working my heart out to elect Hillary Clinton President this November,” Warren said. “But we also need to remember that it’s not just on us to make Hillary a successful candidate. It’s also on us to make her a successful president…. [That] means helping surround Hillary Clinton with a cabinet and team of advisors who believe in the agenda she has outlined.”