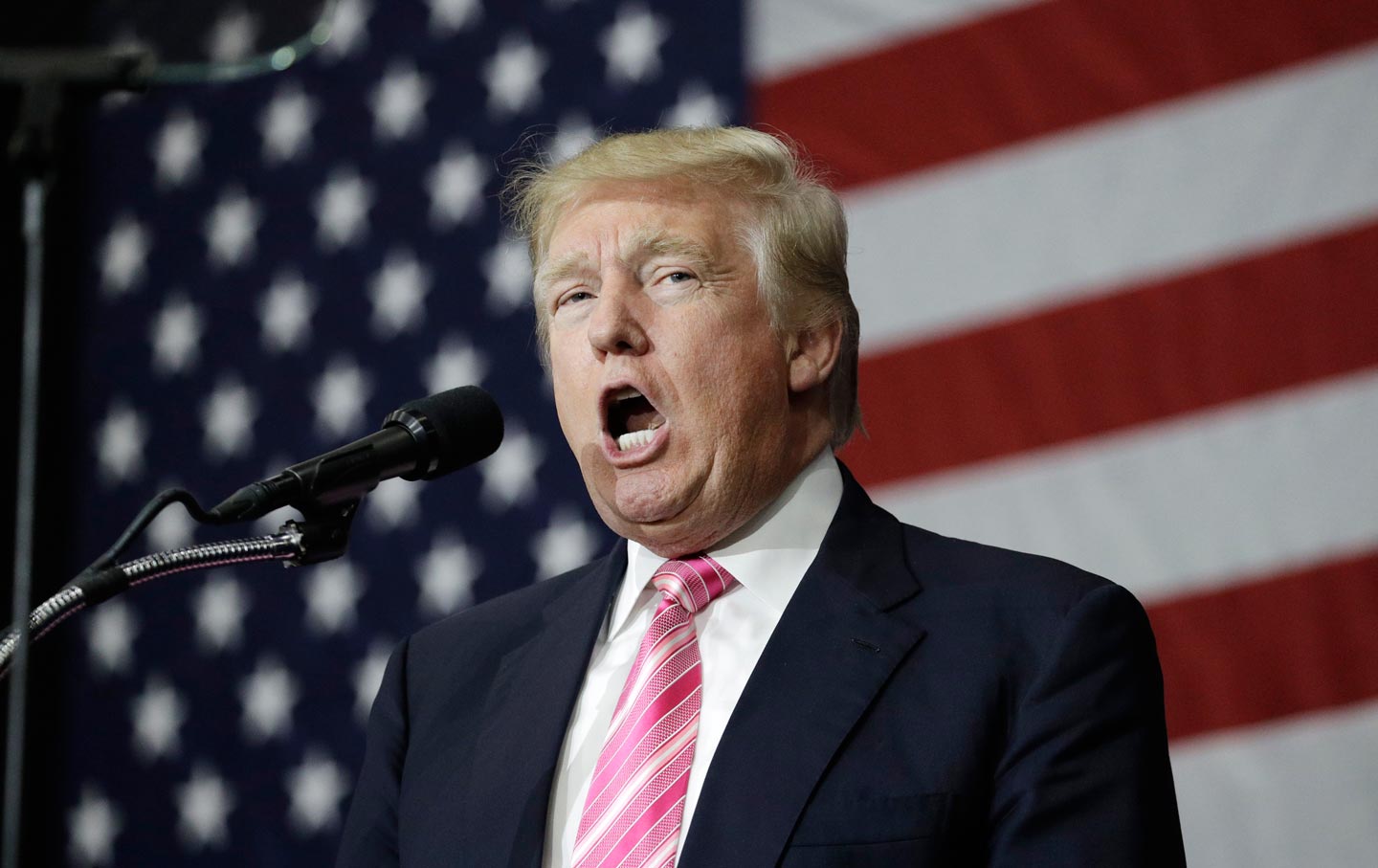 Donald Trump rallied his supporters in Manheim, Pennsylvania, Saturday night with a call for union members to show their support. To the Republican presidential nominee’s surprise, his appeal was answered with silence.

“The AFL-CIO: How many members here are in the AFL-CIO?” Trump called out to the crowd. “Many?”

After an awkward pause, the billionaire “populist” responded to the non-response.

“All right, not too many,” observed a befuddled Trump. “Where are you?”

The American Federation of Labor-Congress of Industrial Organizations had an explanation. The labor federation’s Twitter feed announced on Sunday morning: “Trump wonders where the union members are at his rally. Answer: with @hillaryclinton.”

The AFL-CIO and most major unions have endorsed Clinton, and there are plenty of union members who are enthusiastically on board with her candidacy. Others are less enthusiastic about the Democratic nominee, but they recognize that they cannot, as working men and women, as union members, back the most virulently anti-worker and anti-union ticket the Republican party has ever nominated.

AFL-CIO president Richard Trumka calls the platform Trump and Pence are running on “a vicious attack on workers.”

Yet Trump was a no-show in the trade debates of the past. He does not embrace Sanders’s structural critique of “race-to-the-bottom” free-trade policies that harm workers and communities; rather, he simply claims that he would negotiate better deals. His running-mate, Indiana Governor Mike Pence, has been a leading advocate for free trade and the TPP. The same goes for Trump’s most prominent supporter and chief enabler, House Speaker Paul Ryan, R-Wisconsin.

When he gets off the trade issue, Trump has a record that should, indeed, scare working men and women away from his rallies. Last year, the billionaire declared that: “Having a low minimum wage is not a bad thing for this country… We can’t have a situation where our labor is so much more expensive than other countries’ that we can no longer win.” He also complained in a GOP debate: “Taxes too high, wages too high, we’re not going to be able to compete against the world.”

Trump’s decision to make the fiercely anti-union Pence his running mate—and point man on domestic policy—can and should be read as a clear signal that the Republican presidential nominee is prepared to adopt federal policies that mimic the disastrous approaches of dogmatic governors such as Pence and Wisconsin’s Scott Walker.

Trumka calls the platform Trump and Pence are running on “a vicious attack on workers.” And what of the steelworkers Trump mentioned in Manheim Saturday night? Their Pennsylvania-based union, the United Steelworkers, dismisses Trump as a candidate who “has seemingly worked at every turn to divide Americans along lines of race, ethnicity and gender with his racist, sexist and xenophobic statements.”

“Besides just his dangerous and un-American rhetoric, Trump has consistently proven to be on the side of the wealthy and powerful, rather than on the side of working people,” USW International President Leo Gerard explained, when the union strongly endorsed Clinton. “Trump believes workers’ wages are too high and supports union-busting legislation. His tax plan would benefit millionaires and billionaires at the expense of the middle class.”

Ripping “Trump’s say-one-thing-do-another approach to the plight of workers,” the USW noted in its endorsement of Clinton that Trump had refused to negotiate in good faith with union members and their representatives after 500 workers at the Trump International Hotel in Las Vegas who voted in December of last year to join the Culinary Workers Union. Last week, the parent union of the Culinary Workers, UNITE-HERE, called for a national boycott of businesses tied to Trump because of that refusal to negotiate.

Even when it comes to trade debate, which Trump has tried to turn in his favor, unions are not falling for the candidate’s rhetoric.

Leaders of the United Steelworkers, a union that has been in the forefront of the fight against the TPP, explain that, “On the one issue on which workers might agree with Trump, trade, he has proven himself a hypocrite. He criticizes companies for moving production overseas while his own signature line of clothing is produced in low-wage countries like China, Mexico, Honduras and Bangladesh. He just can’t be trusted.”

That is the bottom line: Donald Trump may have trouble figuring out why he is not more attractive to the members of the unions that are affiliated with the AFL-CIO. But union members who have examined his record well understand why they do not belong at his rallies.