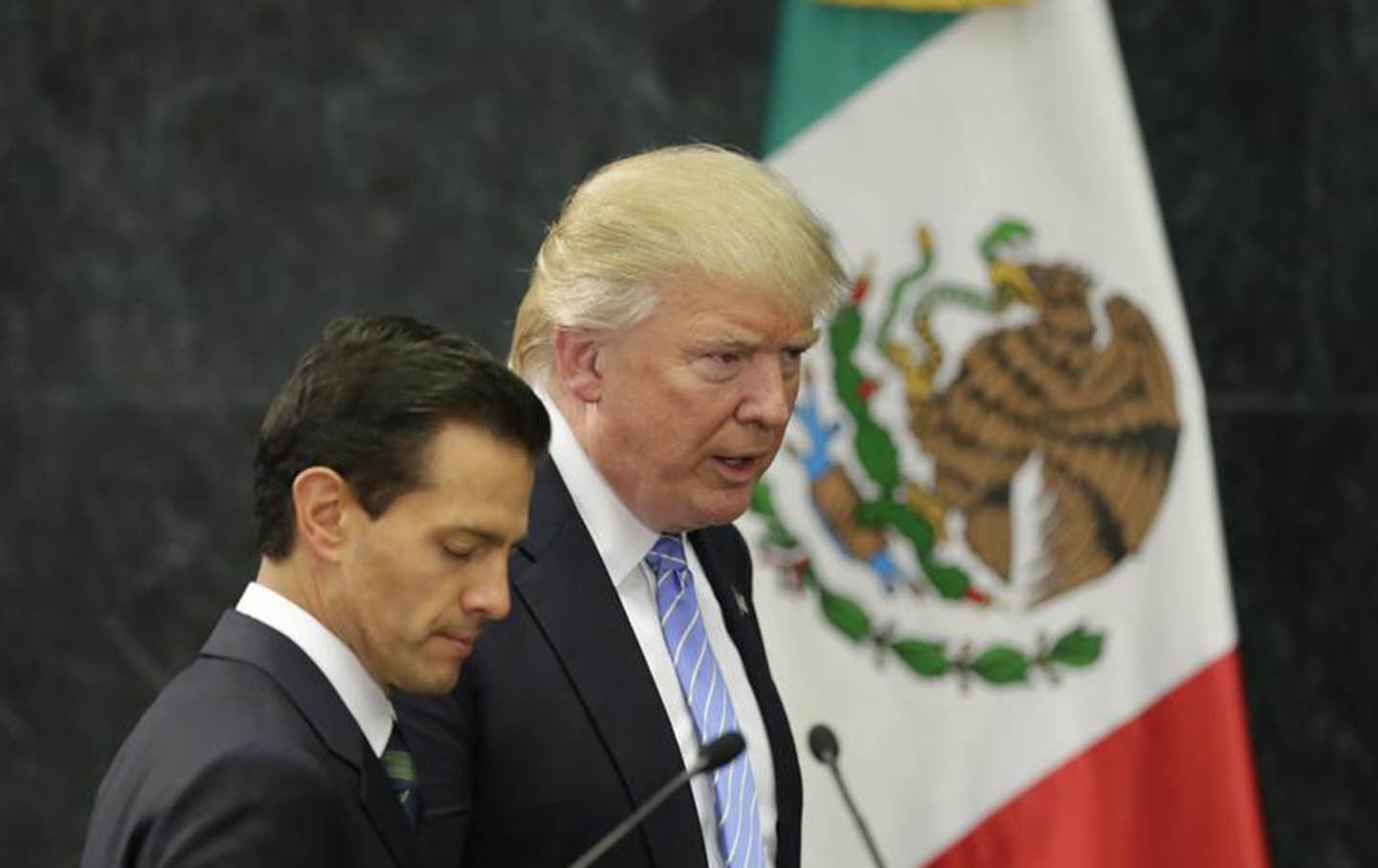 Donald Trump’s press secretary, Sean Spicer, said, in reference to upcoming talks to renegotiate NAFTA, that Mexico’s foreign minister is visiting the United States to “set the table.” Who, one wonders, will do the dishes?1

NAFTA, negotiated by George H.W. Bush, with an important assist by Henry Kissinger, was signed into law by Bill Clinton in 1993, and since then has been symbol supreme of our neoliberal age. It is, at least for the United States, probably more an effect than a cause, a consequence of the broader unraveling of the kind of Keynesian political economy that made New Deal social democracy possible, rather than a driver of that decline.2

Whatever NAFTA’s actual impact in the United States, Trump has focused very narrowly on the trade of manufactured goods to stoke resentments—that is, value-added products assembled in Mexican plants for transnational corporations that are then exported into the United States. He’s careful not to mention that NAFTA has greatly benefited the US agro-industry, which, with its large-scale production, capital, and tech-intensive production, has destroyed the Mexican farming industry, transforming what is left of it into the production of specialty crops to meet the all-season US demand for strawberries, broccoli, and tomatoes. “Make avocados expensive again!” might be a good riposte slogan for Democrats.3

Back in the early 1990s, when NAFTA was being pitched, the idea was that, in Mexico, rural peasant communities and agricultural workers displaced by US agro-industry would find jobs in an expanding assembly sector at the border. I once heard Mexico’s former foreign minister, Jorge Castañeda, in defending NAFTA, say that Mexico just didn’t have the resources to “subsidize” its bucolic rural communities the way that, for comparison, France does. “Globalization” meant opening up Mexico’s small corn, dairy, and pig farmers to global competition—except that their competitors were not just massive in scale and advanced in mechanization but subsidized by the trillion-or-so-dollar US Farm Bill.4

More than two decades into NAFTA, Mexico’s wage scale remains among the lowest in the world.

The other thing NAFTA was supposed to do for Mexico was diffuse productive technology and know-how beyond the narrow assembly sector, contributing to a more robust and integrated industrialization. That never happened. Mexico remains highly dependent on the low-wage maquiladora assembly sector. More than two decades into NAFTA, Mexico’s wage scale remains among the lowest in the world. “Want cheap labor?” asked the Financial Times last year, then “head to Mexico, not China.”5

Whether its architects really believed that NAFTA’s dislocations would work themselves out through the creation of a self-sustaining maquila sector, followed by the evolution of that sector into more comprehensive industrialization, is beside the point: At the same time Bill Clinton was selling NAFTA, he was beginning the militarization of the Mexican border, with Operation Gatekeeper, an acknowledgment that the changes put into place by NAFTA would lead to massive migration and increased desperation.6

NAFTA had the effect not of overcoming structural dependencies but locking them in.

So, over the past two decades, federal trade, farm, and immigration policy has combined to create a three-tiered, nested market: free and common for capital; protected for US agriculture; divided and garrisoned for labor. Mexico can stay competitive with the United States only by keeping its hourly pay brutally low. As Laura Carlsen, who works with the Mexico City–based Americas Program of the Center for International Policy and is among the most astute observers of US trade policy in Mexico, told me, NAFTA had the effect not of overcoming structural dependencies but locking them in. Throw the long-term consequences of Plan Colombia into the mix—Bill Clinton’s other signature Latin America program, which had the effect of taking the violence and crime associated with drug trafficking concentrated in Colombia and telegraphing it up through Central America and Mexico—and you create the catastrophic conditions that many Mexicans live under.7

As with our elites and institutions, Mexico’s political class is incapable of mounting effective opposition to Trumpism. Neoliberalism has gutted the liberal consensus, on both sides of the border. There’s lots of tough talk and wounded feelings. As Carlsen told me, Mexican elites have, over the past two or so decades, faithfully followed the globalization playbook, sticking to the terms of NAFTA even as it became increasingly clear the model wasn’t working as promised. Mexico’s President Enrique Peña Nieto, whose approval ratings stand at a sub-Trumpian 12 percent, has basically checked out, turning over his response to Trump to his former finance minister, Luis Videgaray. Videgaray had to step down as finance minister a few months back because of his role in the disastrous decision to invite to Mexico, and thus legitimize, candidate Trump. But Peña Nieto just named him foreign minister. Videgaray is the one coming to set Trump’s table.8

The New York Times just issued what was essentially a briefing paper, in the form of an analysis by Eduardo Porter, on how Mexico might stand up to Trump, including by courting China. It is hard, however, not to see Trump winning at least a symbolic victory, given the haplessness of Peña Nieto and the dependency of Mexico on exports to the United States. “Mexico has a lot of chips to play,” said Castañeda, who most likely is positioning himself for an independent run for the presidency in 2018. Castañeda is floating the idea of using US security concerns—Washington relies on Mexico to stem the flow of undocumented workers from Central America on its southern border—to push back against Trump. This won’t work. Mexican elites are much more dependent on the billions of dollars the United States gives its gendarmes in military aid to keep their own hungry citizens at bay than the United States is on Mexican policing. Expect the Peña Nieto government to fold in the weeks ahead.9

One politician who might be well placed to respond to Trump is the populist social democrat Andrés Manuel López Obrador.

One politician might be well placed to respond to Trump, and that’s Andrés Manuel López Obrador, or AMLO, as he is known, who came within a hair of winning the Mexican presidency on an anti-NAFTA platform in 2006. He’s running again for 2018 at the head of a new political coalition, and is rising in the polls. Expectedly, the Anglo financial press is already comparing him to Trump, except that AMLO isn’t a xenophobe who is promising to restore CIA black sites and torture techniques. He’s a populist social democrat, and the obvious comparison is with Bernie Sanders, with nearly exactly the same set of limits and possibilities as Sanders.10

When AMLO ran in 2006, NAFTA was a bit over a decade old, and the brutalism of what became Mexico’s War on Drugs had not yet set in. But in 2018, he’ll be running in a radically transformed environment, especially if Trump is successful at slapping tariffs on Mexico’s maquila sector, building his wall, or otherwise limiting migration and vital remittances. NAFTA, as social movements in Mexico—especially those focused on food sovereignty, ecology, and land—point out, has been calamitous.11

“Unilateral cancellation of [NAFTA] could lead to an even further worsening of the situation.” —John Mill Ackerman

But over the decades, Mexicans have adapted themselves. John Mill Ackerman, a professor of sociology at the Universidad Nacional Autónoma de México, tells me in an e-mail that it is “now impossible to go back to a pre-Nafta situation, and the unilateral cancellation of the agreement could lead to an even further worsening of the situation in the short run for workers and peasants and thereby increase the migratory flow.” In the long run, extraction from NAFTA integration might be beneficial, as “it would force the country to concentrate once again on its own national development and turn south, instead of north, for political and economic alliances” (see also this segment by Ackerman on the topic).12

Long-run benefits would have to overcome short-run distresses. John Tutino, a historian at Georgetown, has studied longue durée Mexican history, especially insurgent backlashes to global market integration, starting in the 1800s and culminating in the great Mexican Revolution of 1910. Here’s what Tutino says about the current moment:13

Nafta essentially destroyed Mexico’s staples agriculture, the wheat and especially maize (the Mexican invention that is the foundation of the nation’s diet), leaving Mexicans dependent on US corn for the tortillas of daily life. Mexican agriculture has been left to produce designer crops—avocados, broccoli, tomatoes, strawberries—for US consumers who want them year round. A hit on Nafta would hit Mexicans’ basic food system. How quickly and to what extent could Mexican staple agriculture revive? On industry, the challenges are parallel: Nafta destroyed the industries—textiles and more—that served Mexico’s consumer needs, leaving the country dependent on global supplies delivered in large part by Walmart. Could a domestic industry revive? The fear, of course, is that Trump policies would undermine the auto and other export-oriented industries, while leaving Mexicans still dependent on US agricultural staples and Walmart-delivered consumer goods, both of which would be more costly if Mexico placed retaliatory tariffs on those items. Unemployment and marginality would widen, wages would drop, and incentives to migrate north would rise. But what if Trump can close the border relatively effectively? Mexico would become a pressure cooker of desperation and discontent, likely stimulating more violence in everyday life, potentially setting off conflicts rising toward political instability. Remember that one of the main causes of the 1910 Revolution was the impact in Mexico of the US-rooted Panic of 1907, which spread unemployment and displacement across Mexico.14