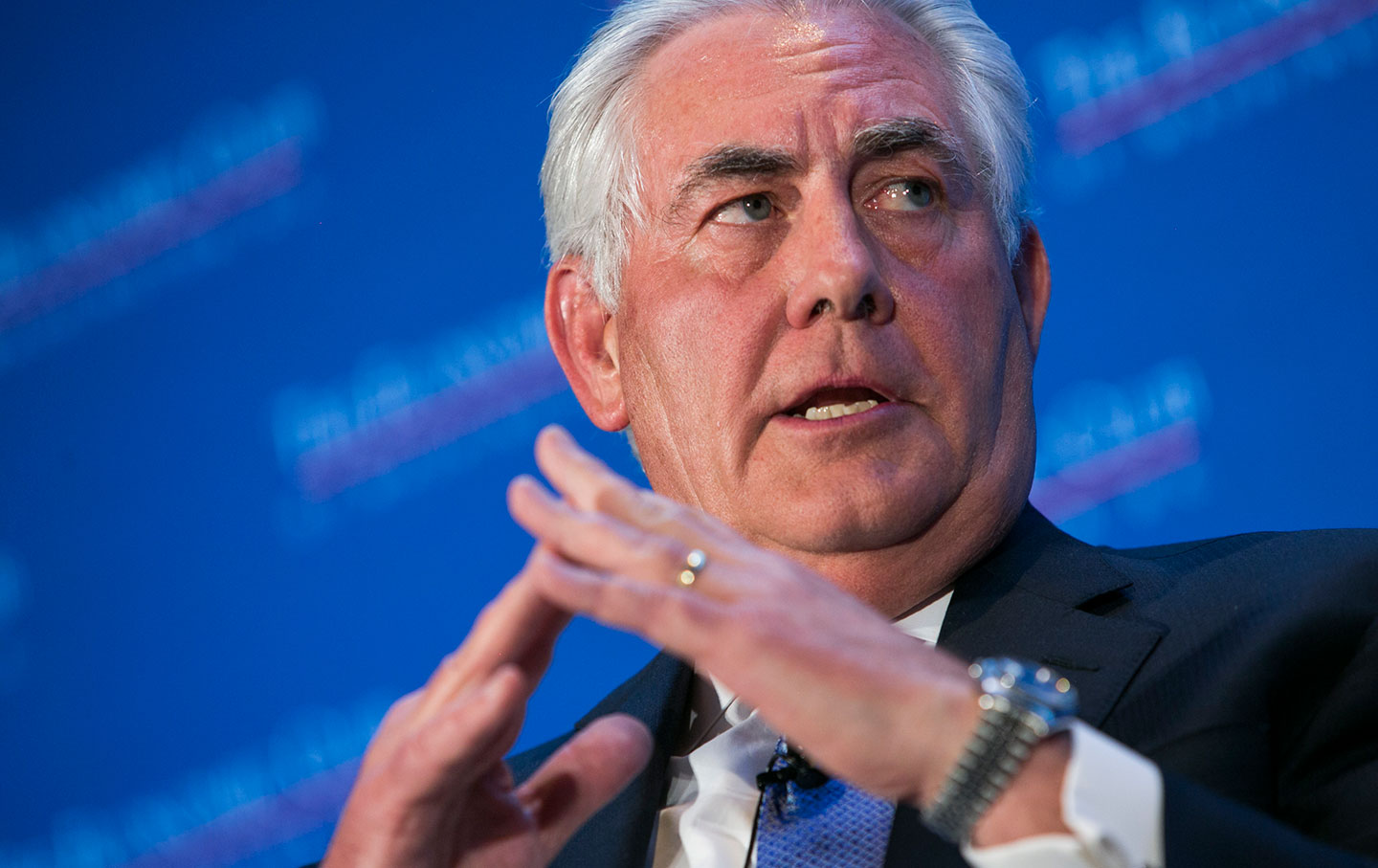 Rex Tillerson’s nomination to be secretary of state in December raised an immediate and clear conflict of interest: As the CEO of ExxonMobil, he had $181 million worth of company stock that will vest in the next ten years. As secretary of state, Tillerson would have innumerable chances to make decisions that would boost the fortunes of ExxonMobil, the largest multinational oil and gas company in the world.

ExxonMobil and Tillerson announced their attempt to solve that problem last week, and at first glance it’s not bad—it certainly goes miles further than anything Donald Trump appears willing to do in order to resolve his own conflicts of interest. But a closer look at both the letter and the spirit of the Tillerson-ExxonMobil arrangement shows Tillerson has not fully separated his financial interests from that of the company.

Under the deal, Tillerson would cash out all of his non-vested stock if he’s confirmed as Secretary of State and place the proceeds in an irrevocable trust that he cannot control. He would get payouts from this trust over a 10-year period. Also, if Tillerson goes back to work in the oil and gas industry in the next ten years, he immediately forfeits whatever is left in the trust, which would be dispersed to a charity that Tillerson couldn’t even choose.

This arrangement would ostensibly solve two problems: Nothing Tillerson does as secretary of state would boost his present financial holdings, and the forfeiture clause eliminates the incentive for Tillerson to return to his industry after becoming secretary of state. In other words, it would theoretically take away the possibility that Tillerson would do things to make oil and gas companies a bunch of money, and then return to the industry afterwards to receive his reward.

But ExxonMobil appears to be pulling a fast one. In documents filed with the US Securities and Exchange Commission describing its arrangement with Tillerson, the company stated that if Tillerson “becomes employed by or provides services to a company in the oil and/or gas or oil and/or gas services industries, Mr. Tillerson will forfeit the remaining undistributed assets in the Trust.”

But the documents between Tillerson and his trustee, also filed with the SEC, say something else entirely, as the eagle-eyed David Arkush of Public Citizen noted. The agreement with the trustee says only that Tillerson’s assets will be forfeited if Tillerson violates the clause that “the Beneficiary shall not engage in competitive employment in the oil and/or gas industry.” The key word there is “competitive.” It means Tillerson can’t go work for BP or some other company—but could go back to work for ExxonMobil. (The company has a mandatory retirement policy at 65, which would preclude Tillerson’s return as an employee, though he could easily come back as a consultant.)

ExxonMobil appears to have slipped a substantial loophole into this agreement. The company did not return an immediate request for comment, but Tillerson will be under oath Wednesday morning for his confirmation hearing, and he could surely provide some clarity.

There is also a larger, more conceptual problem with Tillerson’s arrangement, even if the forfeiture is executed properly. Good government reformers have decried the increased use of golden parachutes for executives that take public-service jobs, which happens most often in the financial sector. These payouts accelerate the government-corporate revolving door by creating huge financial incentives for executives to head into government. “Only in the Wonderland of Wall Street logic could one argue that this looks like anything other than a bribe,” Sheila Bair, the former chair of the Federal Deposit Insurance Corporation, wrote in 2014. “Once upon a time, part of the nobility of joining public service was the willingness to make the financial sacrifice. We want people entering public service because they want to serve the public. Frankly, if they need a [golden parachute], I’d rather they stay away.”

Tillerson’s payout, by every appearance, is a textbook case of this phenomenon. ExxonMobil has a strict policy against golden parachutes and payouts of non-vested stock. (Non-vested stock is stock that the executive doesn’t fully own yet, which he or she receives over time as encouragement to help the company perform better.) If you leave the company early, you don’t get your non-vested stock. ExxonMobil’s annual proxy statement boasts that “Our program is applied consistently to all executives, including the CEO.”

Until now, that is. Tillerson will be getting preferential treatment no other ExxonMobil executive has been afforded—he gets his performance-based stock guaranteed for the next 10 years, without worry of forfeiting it in the case of early departure, a bad turn in the company’s fortunes, or anything else. It’s a huge boon, and in the eyes of many, a pre-payout for advancing ExxonMobil’s interests at the State Department.

A bill from Senators Elizabeth Warren and Tammy Baldwin last year, which Hillary Clinton publicly backed, would have made Tillerson’s ExxonMobil payout illegal. In a joint statement, the senators blasted Tillerson’s arrangement with the company. “President-elect Trump made a commitment to ‘drain the swamp’ in Washington by reducing the influence of special interests in government, but this egregious payout deal is nothing more than a golden parachute that flies in the face of his campaign promise,” Warren and Baldwin said.

If the Warren-Baldwin bill was a law today, Tillerson would have to forfeit his non-vested stock entirely—leaving him nonetheless a very wealthy man. If he was unwilling to do that, he couldn’t be nominated.