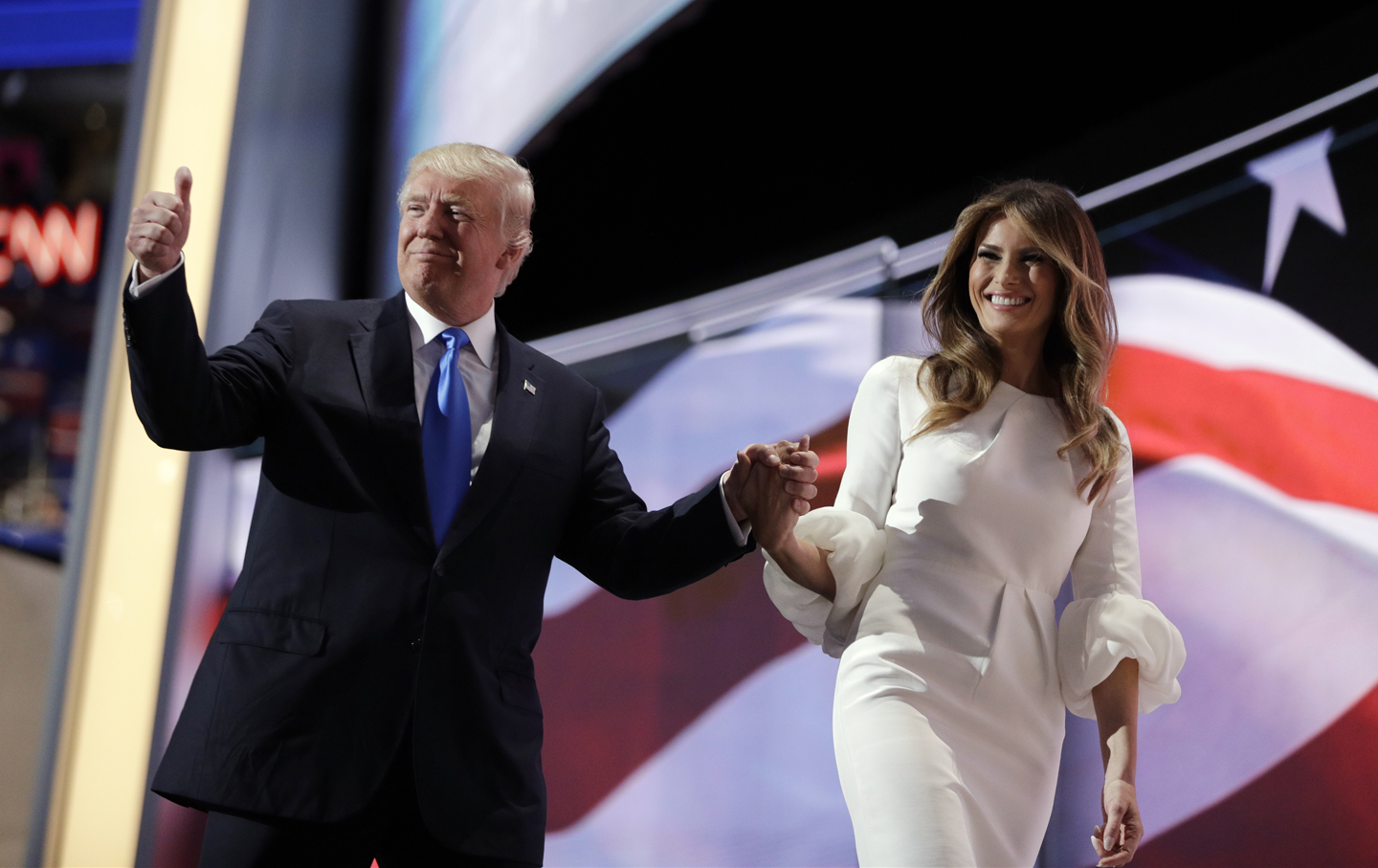 Republican presidential candidate Donald Trump walks off the stage with his wife Melania during the Republican National Convention in Cleveland. (AP Photo/John Locher)

So far the Trump Family convention in Cleveland isn’t turning out the way the press expected. Instead of having to cover 1968-level street violence, the media has been obsessing over two executive-suite soap operas: Melania Trump’s plagiarism and Roger Ailes’s ouster from Fox News over charges that he has sexually harassed female employees.

Both are preoccupations of a politico-media professional class that is becoming less relevant as Trumpism replaces the obsolete ideology of modern Republicanism. Why do you need a corps of independent analysts when there’s no policy to analyze?

Like Ailes’s demise, the issue of plagiarism is close to the heart of anyone in journalism. But the plagiarism of a potential first lady protected by layers of Trump quickly became a gotcha without a get, joining the ranks of stories like Trump’s wavering over Pence as his VP or Trump’s kids finally convincing him to fire reporter-bruising body-man Cory Lewandowski (who landed a paid gig at CNN)—that is, it’s irresistible to insiders, but just more PC nitpicking to anyone who has found in Trump their own primal scream. Wednesday morning CNN’s Chris Cuomo accused Trump campaign chair Paul Manafort of “lying about” Melania’s speech. It was the sort of confrontational interview that might have, just months ago, gone viral as an example of truth-to-power speech. But now, after Trump has crushed all doubters, Paul Man-the-Fort snuffed it out with an uncomfortable truth, telling Cuomo, “You’ve spent seven minutes talking about something that’s not relevant to anybody but you in media.”

Later that morning the Trump campaign nevertheless released a letter from Meredith McIver, a Trump Organization staff writer who has worked on some of Donald’s books, apologizing for inadvertently injecting Michelle Obama’s words into Melania Trump’s speech. McIver explained that Melania, who “has always liked” Michelle Obama (!), had read bits of her 2008 Democratic convention speech to McIver over the phone as they worked on the speech. Somehow the words made it unchanged into the text. McIver felt terrible about it, but when she offered to resign, Trump would have none of it. Yet another slap-down to all the pundits who cried that heads must roll.

Better to make lemonade, Trump figured. “Good news is Melania’s speech got more publicity than any in the history of politics,” he tweeted, “especially if you believe that all press is good press!”

Ted Cruz Was Not the Hero Republicans Needed

Protesters in Cleveland Bring the Wall to Donald Trump

Nothing cements the idea that fact-based journalism is the work of out-of-touch media “elites” than a failed gotcha. A Daily Show tweeter was apparently trying to extend the apoplexy over plagiarism by showing that some lines from Don Trump Jr.’s highly successful speech Tuesday night echoed those in an American Conservative piece from May. I have to admit that when I saw the TPM headline, “Here We Go Again: Language In Trump Jr.’s RNC Speech Recycled From Article,” I too wanted to keep apoplexy alive. Only problem was that Don Jr.’s speechwriter and the article’s author are one and the same, Frank Buckley, which means here we don’t go again.

Roger Ailes, 76, ages like the rest of us. Given his health problems and his feuds with Rupert Murdoch’s two sons, who run Fox News’s parent company, 21st Century Fox, he has been on his way out of the network he founded for a couple of years now. And yet, since Gretchen Carlson stunned the media world by filing a lawsuit against Ailes for sexual harassment two weeks ago, his impending departure has haunted the media in Cleveland this week like Banquo’s ghost. “Is Roger Ailes finished?” Politico writes. “Between segments covering the Republican National Convention in Cleveland on Tuesday afternoon, that’s what all the on-air talent and producers were checking their Twitter feeds, refreshing The Drudge Report and flipping through their inboxes and Slack channels to find out.”

But, really, no one outside the chattering class cares about Ailes’s fate any more than they do Melania’s borrowings. Most Fox fans would probably mistake him for Alfred Hitchcock (also known for his complicated relationships with blondes) if he suddenly did a cameo on their screens.

Now, if Fox’s on-air hosts, like Hannity, O’Reilly, and Cavuto were willing to leave with Ailes to start an all-new network—a story that’s been pushed by Ailes loyalists, as in this unhinged piece on Breitbart—that might have a pulse. Such walk-out fantasies aren’t uncommon among long-time top dogs—early on in the primaries, Trump threatened that if the GOP didn’t “treat me fairly,” he’d bolt and form a third party.

Trump’s rise and Ailes’s fall are intrinsically linked. The overlap between Trump’s fan base and Fox’s viewership—aging, white, and increasingly angry conservatives—is large. Fox’s racism, faux populism, and anti-PC agitprop prepared the ground for Trump’s takeover of the GOP.

And that’s why Megyn Kelly’s role in Ailes’s ouster is such exquisite poetry. Kelly had reportedly told the 21st Century Fox law firm investigating Carlson’s charges that Ailes had sexually harassed her too, some 10 years ago. The sado-authoritarian entertainment of both “The Apprentice” and shows like Fox & Friends (where Trump had been a regular for years) have played with faintly sexualized dominance fantasies about men’s power and wealth. Former Miss America Gretchen Carlson played the simple, wholesome knock-out barely aware of her charms, and that’s part of the surprise in her lawsuit. Jon Stewart used to chide the Stanford- and Oxford-educated Carlson for dumbing herself down.

Kelly is something else again, a lawyer and the network’s rising star, with ratings just below O’Reilly’s. Trump’s attack on her after the first debate (“blood coming out of her whatever”) was a highly gendered expression of dominance, and, like Trump’s ensuing feud with Ailes over Kelly, it was one of the few times a public figure was able to turn Fox’s audience viscerally against the net. Kelly and now Carlson are getting the usual vicious, misogynist treatment on social media; and the Fox crew loyal to Ailes resents them mightily.

Still, the PC gremlin is now inside the bunker. You can say that Trump survived Ailes, but you could also say that Kelly survived Trump.

The real question, however, is whether journalism will survive Trump.