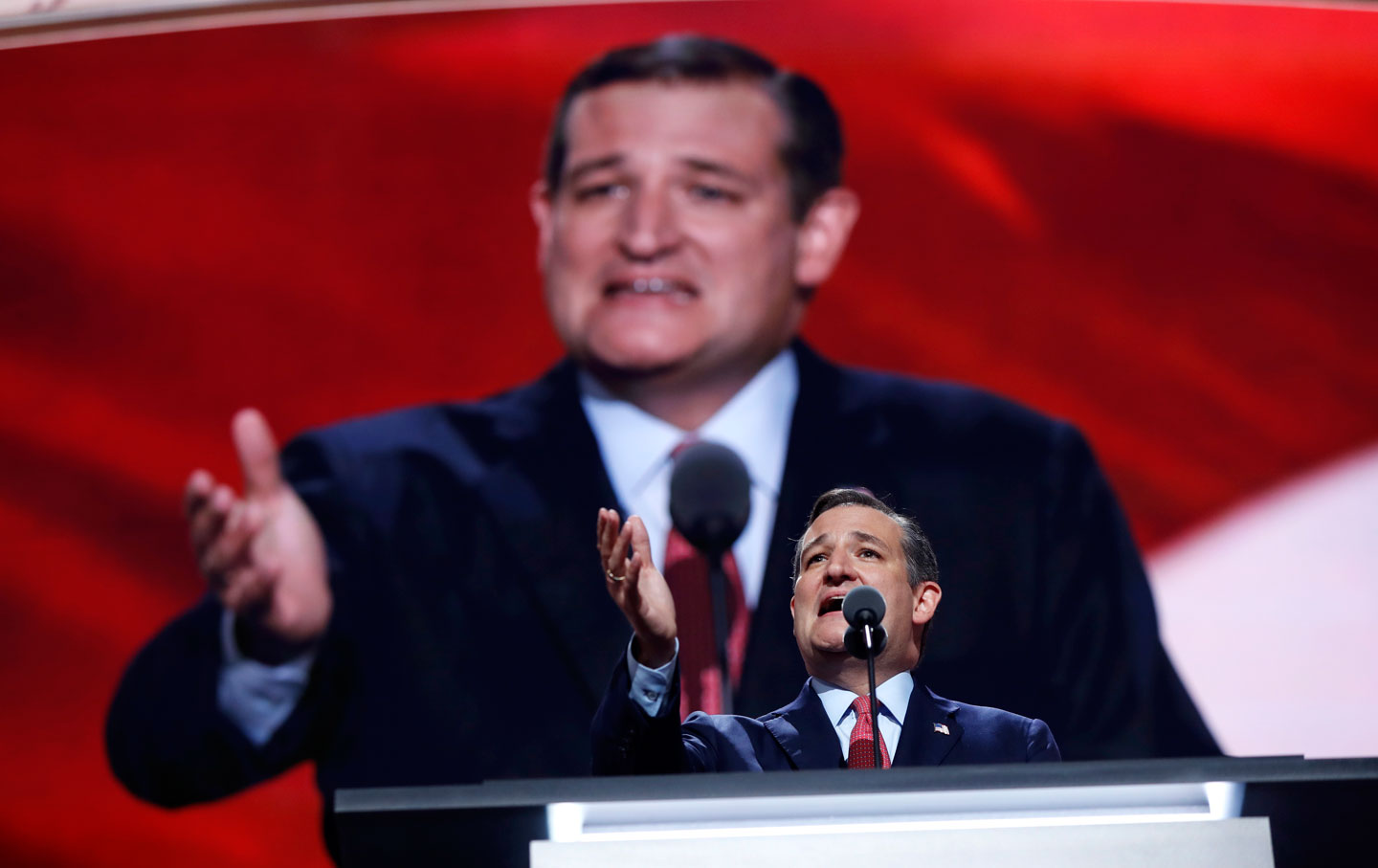 Cleveland—The Republican party is at war with itself.

On Wednesday afternoon, Senator Ted Cruz met hundreds of Republican delegates at a bar on the Cleveland waterfront to thank them for supporting his campaign. The loyal crowd was thrilled to see Cruz, who hasn’t said much since being vanquished by Donald Trump in May. After several minutes of avoiding the subject of Trump entirely, Cruz finally acknowledged that “now, our party has a nominee.”

At that very moment—almost on the word “nominee”—the garish Trump-emblazoned campaign plane appeared in the sky behind Cruz, descending slowly downwards as Trump arrived in Cleveland to officially claim his victory. Cruz was clearly astonished. The crowd, fingers pointed skyward, erupted in boos.

Six hours later, it was Cruz leaving the main stage at the RNC surrounded by boos. He had declined to endorse Trump, and when, at the end of his speech, he simply asked the crowd to “stand, and speak, and vote your conscience, vote for candidates up and down the ticket who you trust to defend our freedom and to be faithful to the Constitution,” all hell broke loose inside the arena. Chants of “say his name!” and “we want Trump!” made it difficult to even hear the end of Cruz’s remarks. He was crushed by boos as he walked off the stage.

Down on the floor, his wife reportedly had to be escorted out by security after the crowd became hostile to her. Afterward, up in the donor suite, a man had to be physically restrained to prevent him from going after the senator.

Plugged-in reporters quickly found out the backstory: Quite aware that Cruz didn’t plan to offer an endorsement, Trump’s team allowed him to speak anyway. But Trump floor bosses actively encouraged the boos and jeers. It was a struggle for control of the party, played out on national television.

Perhaps this is the made-for-television drama that Trump—who is, if nothing else, a supremely skilled manipulator of cable news coverage—had been promising all along. In his mind, at least, he embarrassed Ted Cruz with the world watching, as punishment for his disloyalty. Trump supporters rushed to tell reporters what a disaster Cruz was; Representative Peter King called him a “fraud and self-centered liar who forfeited all right to ever again be considered for president.” Chris Christie said it was an “awful, selfish speech.” To boot, Trump also snuffed out any lingering coverage of the Melania Trump plagiarism story with a plateful of drama that cable producers are absolutely devouring.

The scale of what happened Wednesday night should not be totally subsumed by the tawdry details. What we witnessed was a political party devouring itself. Not only did Trump steamroll the traditional conservative message that was finally beginning to emerge on stage Wednesday, but Ted Cruz—a candidate likely to be just as doomed in a general election as Trump—officially set himself up as the premier anti-Trump candidate. It would be one thing if Nevada Governor Brian Sandoval, a popular and moderate governor, had embarrassed Trump and won accolades. Instead it was an uncompromising ideologue who shut down the federal government to make a point about Obamacare.

The party was clearly hoping that Wednesday would be a night for more heterodox conservative ideology to get an airing. Scott Walker spoke at length about budget deficits and the pernicious influence of big labor unions. Mike Pence, who described himself as a “Christian, a conservative, and a Republican, in that order,” gave a truly boilerplate GOP address that will now receive virtually no attention.

Meanwhile, party reformers already hanging their hats on 2020 have been avoiding the uncomfortable fact that Cruz came in second this time, instead of a much more palatable candidate like Marco Rubio. Now Cruz has parlayed his second-place finish into an early front-runner status for the next election.

George W. Bush has reportedly been voicing concern that he might have been the last Republican president, which is almost certainly not true. But this historic night in Cleveland may have pushed the Republican party a lot closer to the edge.