Members and guests arrive for a New Year's Eve celebration attended by Donald Trump and his family at the Mar-a-lago Club in Palm Beach, December 31, 2016. (Reuters / Jonathan Ernst)

As President Donald Trump headed to his private resort in Florida this weekend—his second trip in two weeks, and probably not his last this month—ethics experts and multiple senators voiced serious concerns about the president’s conducting business in a bustling, elite, members-only club.

Over the past 48 hours, Trump validated those concerns with gold-plated gusto. He hashed out a response to a North Korean missile launch on a busy patio, as people snapped photos and waiters cleared his salad. He hobnobbed with members and visitors at the club, making it clear that paying the $200,000 member fee at Mar-a-Lago was an easy way to parlay with the most powerful man on earth. And passersby were apparently able to get close to classified documents and the presidential limo whenever they pleased.

Senators Sheldon Whitehouse and Tom Udall called earlier this month for more transparency during the president’s visits to Mar-a-Lago, and in particular more information about security arrangements. They released a joint statement Monday that said: “Now we have unknown and unvetted Mar-a-Lago members looking over the President’s shoulder as he conducts our foreign policy. This is America’s foreign policy, not this week’s episode of Saturday Night Live. We urge our Republican colleagues to start taking this Administration’s rash and unprofessional conduct seriously before there are consequences we all regret.”

CNN reported Sunday night that, one hour before Trump was set to dine with Japanese Prime Minister Shinzo Abe, North Korea launched a ballistic missile 300 miles into the Sea of Japan. Trump and Abe nevertheless sat down in the center of the Mar-a-Lago patio to review the situation and plot their response over dinner as scores of club members watched:

As Mar-a-Lago’s wealthy members looked on from their tables, and with a keyboard player crooning in the background, Trump and Abe’s evening meal quickly morphed into a strategy session, the decision-making on full view to fellow diners, who described it in detail to CNN….

Trump’s National Security Adviser Michael Flynn and chief strategist Steve Bannon left their seats to huddle closer to Trump as documents were produced and phone calls were placed to officials in Washington and Tokyo. The patio was lit only with candles and moonlight, so aides used the camera lights on their phones to help the stone-faced Trump and Abe read through the documents.

And that was hardly the only time the president made himself—and the working of the US government—available to club members. The president posed for selfies with various guests, including the bridesmaids at a wedding for Carl Lindner IV, an heir to the multibillion-dollar fortune of his late grandfather, a 20th-century mogul and investor who once controlled Chiquita Brands International. 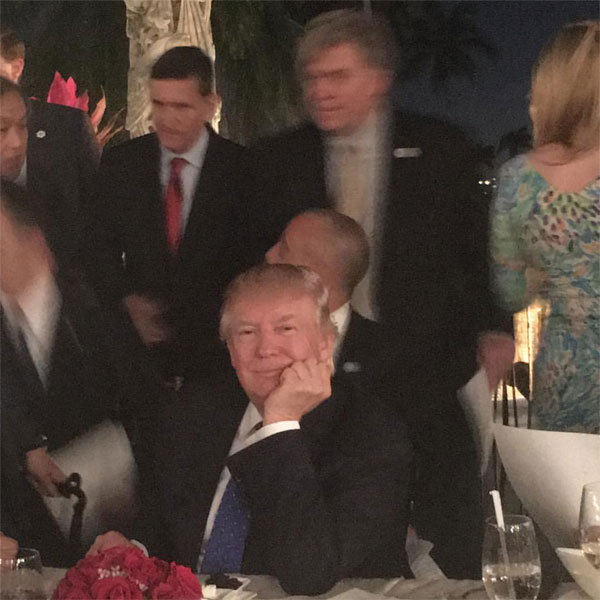 Advisers to the president were also apparently easily accessible. Instagram user katerinacozias posted a photo from brunch at Mar-a-Lago, noting the first lady was also eating there, “oh, and of course, Mr. Steve Bannon.” 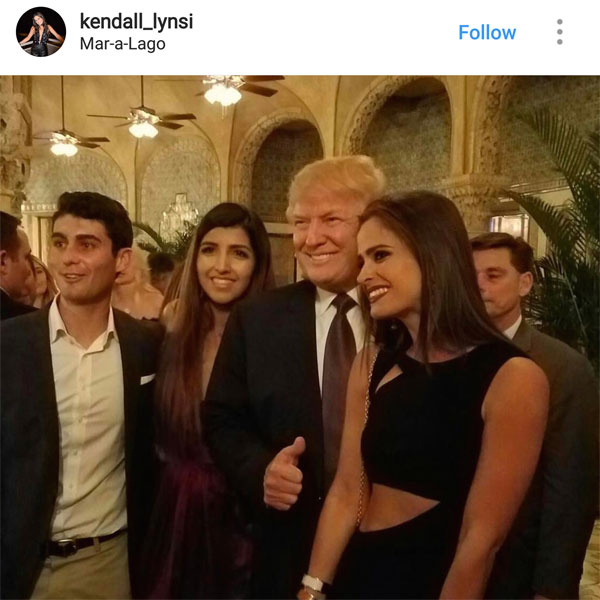 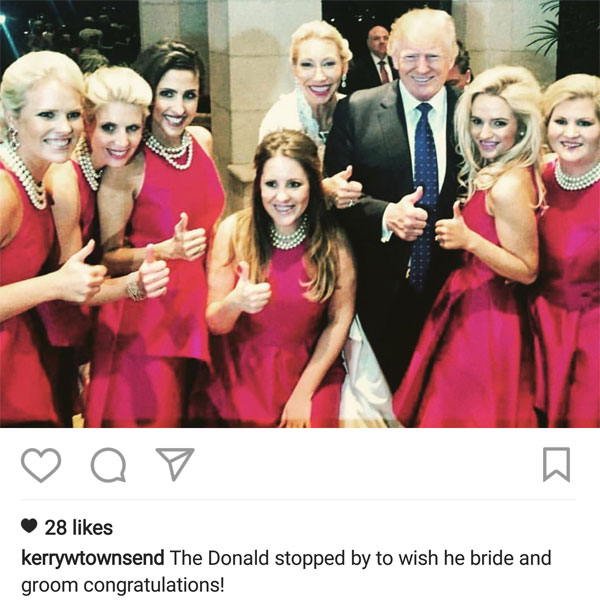 One man even posted a photo alongside the military aide who carries the “nuclear football,” a briefcase that holds various options for nuclear strikes and launch procedures. 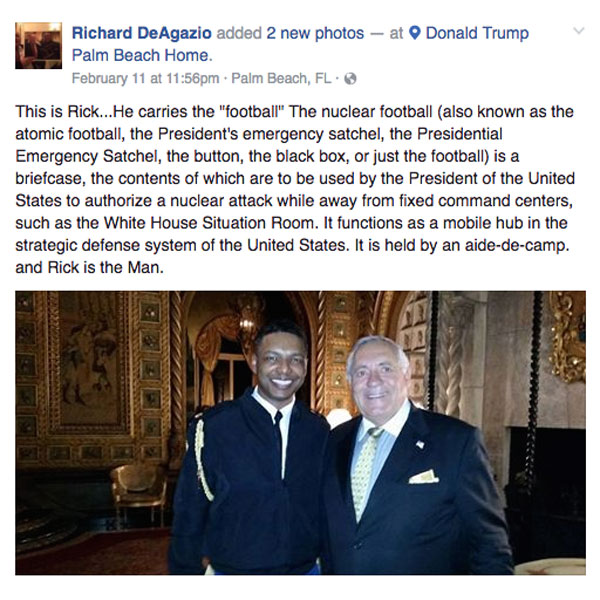 And photos with the presidential limousine, known as “The Beast,” were also possible. 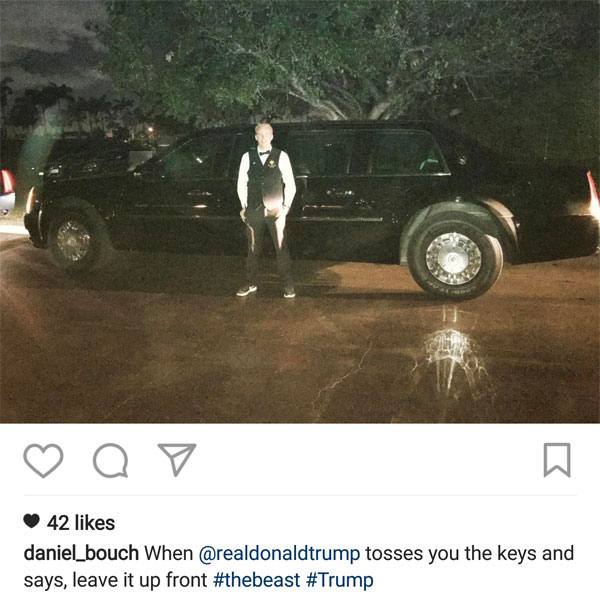 There are obvious security issues involved here—past presidents usually used a secure SCIF tent to deal with classified national-security information when they were away from the White House, not patio tables at a busy Palm Beach club.

But there are also substantial ethical concerns as well. Trump is essentially selling access to the presidential experience: For $200,000, you, too, can mingle with him and his aides on the weekend, and maybe even take in some key national-security decision-making.

“Plenty of presidents had places they go. George W. Bush spent a lot of time on his ranch in Texas, quite famously,” said Jordan Libowitz of Citizens for Responsibility and Ethics in Washington. “But he wasn’t selling membership to his ranch.”

By design or not, all of the attention is serving to enrich Trump and his interests, from which he has not meaningfully divested. “All the reporting, all the cameras, are serving as a free ad from his property,” said Libowitz. “It raises some serious ethical concerns about whether he’s using the presidency for his personal benefit.”

As we noted Friday, Senator Sheldon Whitehouse and Senator Tom Udall sent a letter to the White House last month, demanding information on security protocols at Mar-a-Lago and for a full accounting of the membership list and visitor logs for Trump’s resort.

This past weekend, aside from Trump and the Japanese prime minister, Treasury-secretary nominee Steve Mnuchin was also at Mar-a-Lago, according to White House readouts. Monday evening, the Senate may vote to confirm Mnuchin, instantly making him one of the most powerful players in the financial world—and no doubt a man many people on Wall Street would love a word with.

CREW also wants the visitor logs released. “When there are times when people can be in front of the president, it’s important for America to know who’s paying thousands of dollars for that opportunity.”

Reporters who cover the White House have said they have been told to expect another presidential visit to Mar-a-Lago this weekend.