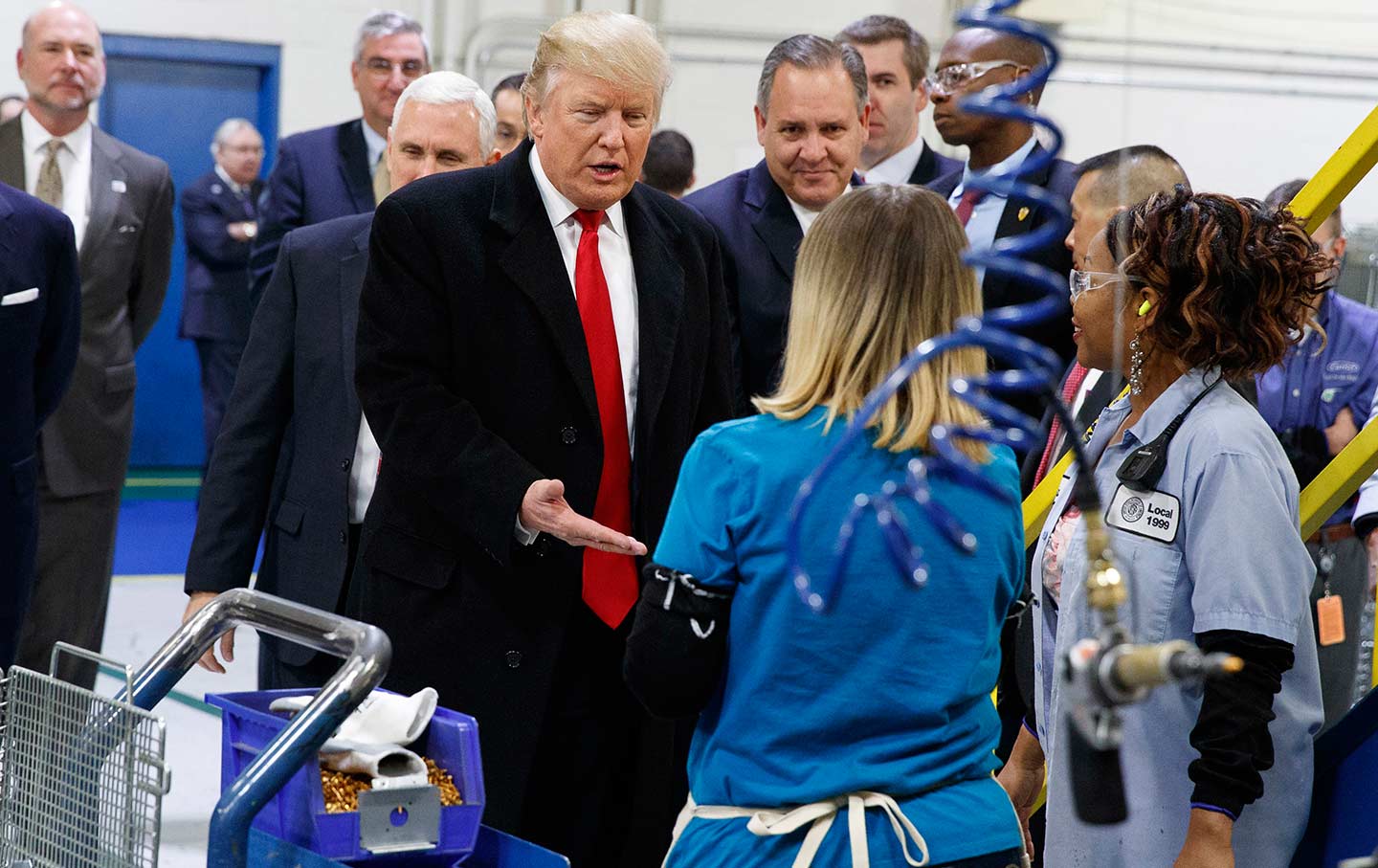 Then President-elect Donald Trump greets workers during a visit to the Carrier factory in Indianapolis on December 1, 2016. (AP Photo / Evan Vucci)

“Promises made, Promises Kept” will be Donald Trump’s slogan as he campaigns “six or seven days a week” for Republicans this fall. During the 2016 election, Trump promised workers “more jobs and better wages,” that he would bring jobs back from abroad. “Every policy decision we make must pass a simple test,” he said, “Does it create more jobs and better wages for Americans?”

Now on the stump, Trump touts “the best economy in the history of our country. Factories are reopening. Jobs are pouring back into the United States.” He has scrambled to get a semblance of a new NAFTA deal (thus far without Canada) in place before the election, and he boasts of his escalating face-off with China, while claiming that workers are benefiting now from his “lovely tax cuts.”

Don’t fall for the con. Real wages have fallen over the last year, despite an economy nearing full employment. Good jobs are still being shipped abroad. Our trade deficit with China climbed to its highest level on record in 2017. The $4,000 raise promised to workers out of the tax bill is nowhere to be seen. As Americans for Tax Fairness has documented, only 4 percent of workers received any increase from the tax cuts, while, as predicted, corporate CEOs used the cut for a record-breaking $700 billion in stock buybacks, lining their pockets and those of investors. Earlier this year, a careful analysis of government data showed that 43 percent of Americans couldn’t afford a basic monthly budget for housing, food, transportation, child care, health care, and a monthly smartphone bill.

Trump not only hasn’t delivered for workers; he’s joined the other side. It’s not an accident that workers in America have suffered stagnant wages and reduced benefits. It is the result of a systematic corporate campaign to crush unions, rig trading rules to benefit investors and undermine workers, and roll back public regulations and investments that benefit working people. Trump’s administration and the Republican Congress are doubling down on that assault.

Workers get a better share of the profits they help to produce when they can organize and bargain collectively. Union workers still enjoy better wages and benefits than non-union workers. When unions are strong, even non-union workers benefit. But under a decades-long relentless corporate assault, unions now represent only 11 percent of all workers and less than 7 percent of those in the private sector.

The only growth sector for unions has been public employees—police, fire fighters, teachers, and civil servants. Republicans, led by governors like Wisconsin’s Scott Walker, have therefore focused on weakening the ability of public employees to organize and bargain collectively. Trump has piled on. His nominee to the Supreme Court, Neil Gorsuch, provided the determining vote in the 5-4 Janus v. AFSCME decision that overturned 41 years of established precedent by ruling that workers somehow have the right not to pay dues to a union that must represent them in collective bargaining. The Supreme Court’s right-wing majority also ruled that employers could require workers to sign mandatory arbitration agreements that prohibit them from joining together in class-action lawsuits to protect their rights.

The Trump administration attack on worker rights has been pursued across the government. Once Trump’s appointees gained a majority on the National Labor Relations Board, they began issuing a series of decisions that make it harder for workers to organize and bargain collectively. Trump’s Labor Department reversed executive orders that protect workers from wage theft, including the Fair Pay and Safe Workplaces rule that required companies bidding for federal contracts to disclose and correct past violations of labor laws or safety regulations. In addition to all that, the Trump administration has proposed $2.6 billion in budget cuts—an enormous 21 percent—to the Department of Labor.

Trump’s administration and the Republican Congress have also launched new offensives against public regulations and investments that benefit workers. Republicans in Congress won’t even allow a vote on raising the minimum wage, which has now lost more than one-fourth of its value to rising prices since its height in 1968. Trump, who suggested he favored raising the minimum wage on the campaign trail, could change this on his own, but has refused to act. As Good Jobs Nation documents, the largest poverty-wage employer in the country is the federal government, which hires federal contractors that employ 4.5 million low-wage workers making less than a living wage of $15 an hour. With a stroke of his pen, Trump could lift their wages as Obama did, but he has refused. This month, Trump announced he would block the scheduled 2.1 percent pay increase for federal civilian employees.

While Trump was refusing to lift the floor under workers, his Labor Department was blocking efforts to lift the ceiling, abandoning Obama’s executive order to raise the salary lid for overtime, depriving 4 million workers of about a $1 billion a year for the overtime pay they would have earned for working long hours.

Trump’s challenge to US trade policies—“the worst trade deals in the history of the world”—is a centerpiece of his appeal to workers. He abandoned Obama’s Trans-Pacific Trade Partnership, renegotiated the Korea deal, has moved to renegotiate NAFTA, and is ratcheting up his face-off with China. How this turns out remains to be seen.

What is clear is that Trump has locked in rewards to companies that ship jobs abroad. Trump’s tax bill included a permanent tax break for profits recorded abroad, taxing them at about half the domestic rate. This gives multinationals a permanent incentive to move jobs or report profits abroad. Trump brags about his efforts to stop Carrier from moving jobs abroad, even though, despite millions in subsidies, the corporation is still laying off workers and increasing production abroad.

Trump has consistently refused to use his power to help workers. The federal government is a leading source of revenue for major US multinationals. With a stroke of the pen, Trump could give preference to companies who make things in the United States over those who ship things abroad. The pen has never touched paper.

Trump’s first major executive order was to order a review of the fiduciary rule that prohibits investment advisors from shafting their clients in handling retirement accounts. His Labor Department moved to allow restaurant owners to pool all tips, opening the door to an estimated $5 billion in wage theft, even as the department slashed efforts to crack down on wage theft, which has robbed workers of literally billions of income they earned. Labor also cut back staff and resources for enforcing worker-safety laws. Equal-protection rights enforcement for minorities and women has been rolled back across the government.

And, having blown up the deficit with the top-end tax cuts, Trump and Republicans are now pushing budgets that would significantly reduce programs vital to working people. Trump called for cutting $1.3 trillion out of Medicare, Medicaid, and the Affordable Care Act. Through executive orders and regulations, he has relentlessly sought to sabotage Obamacare, serving to raise its price and reduce the numbers of workers who can afford decent coverage. His EPA has cut back enforcement of clean air and water regulations, while torpedoing every initiative to deal with catastrophic climate change. His Education Department seeks cuts in Pell grants and loans for students from low-wage families. It has also rolled back protections for students attending for-profit private colleges that too often leave students in debt without providing them with skills needed to get promised jobs. The most vulnerable are targeted for the worst cuts, as House Republicans seek to cut $1 trillion from food aid, Temporary Assistance to Needy Families, and Supplemental Security Income that provides support for the disabled and impoverished elderly.

Trump and Republicans have worked to neuter the Consumer Financial Protection Bureau—a watchdog agency that has returned nearly $12 billion to 29 million consumers victimized by fraudulent credit-card, auto, and payday-lender scams. Trump called the CFPB a “total disaster” and made OMB Director Mick Mulvaney, its head, after Mulvaney called the CFPB a “sad, sick joke” and expressed his disapproval of its existence. Mulvaney has stripped its Fair Lending Office of enforcement powers, eliminated its student-loan office, dropped actions against payday lenders, and savaged its budget. The list goes on.

None of this is a surprise—but it directly contradicts Trump’s claim to have kept his promises to working people. Given continued economic growth and low unemployment, voters give Trump his highest approval ratings on the economy. Trump makes his populist economic posturing a centerpiece of his stump speech (along with along with attacks on the media and race-bait dog whistles to distract and divide). Democrats would do well to puncture the myth and expose the lies. Despite all the posturing, this is an administration and Congress beholden to deep-pocket donors and entrenched corporate interests, that is acting relentlessly and systematically to undermine working people. “Which side are you on?” asks the old workers’ ballad. There should be no doubt about where Trump stands.