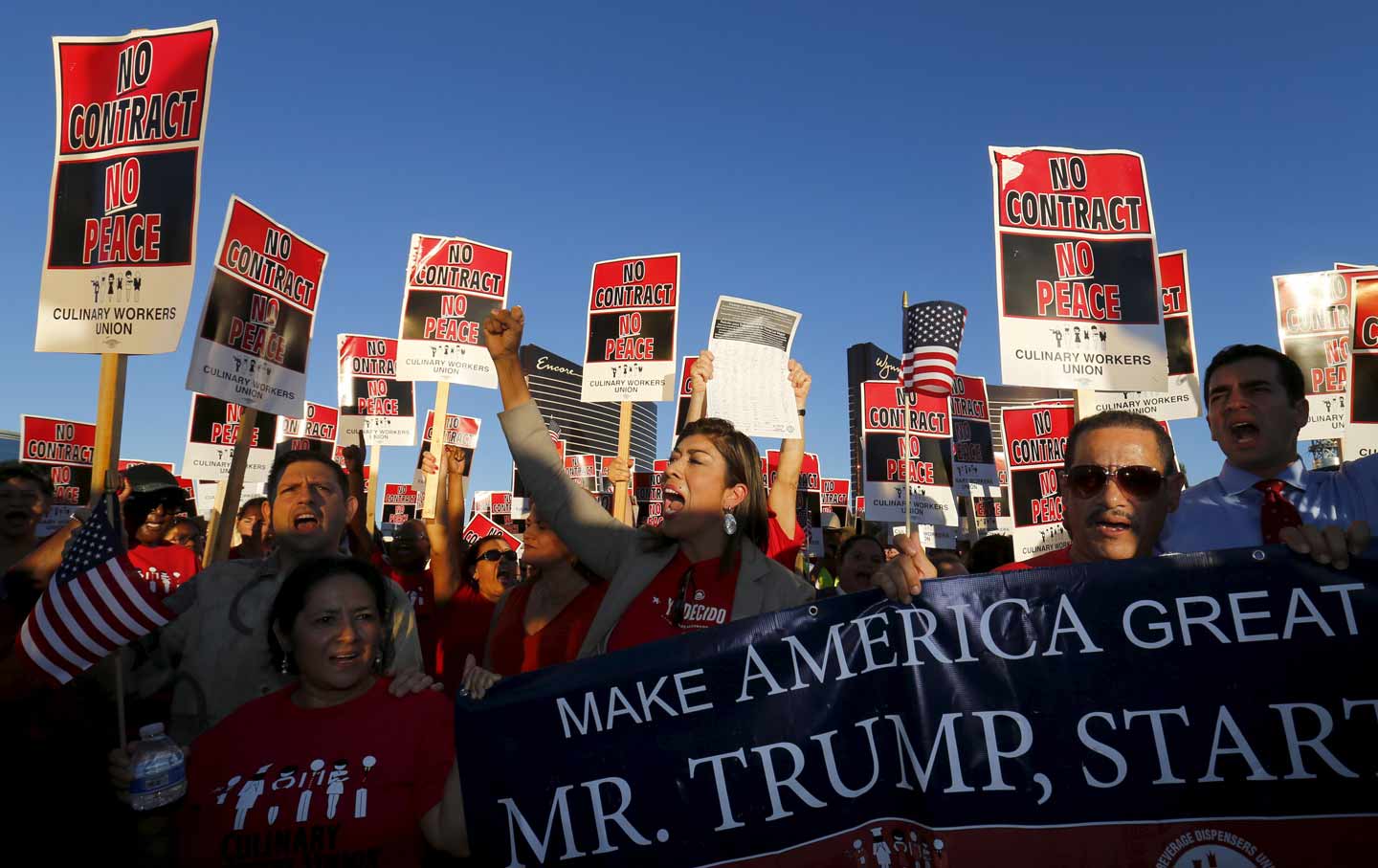 Donald Trump’s appeal lies in his image as the bold, no-BS boss who “tells it like it is” and cuts a fair deal. But the famously blunt tycoon-turned-candidate has been curiously reticent in his private business dealings lately, specifically when it comes to the hotel housekeepers and maintenance staffers who have been chasing his campaign itinerary in hopes of meeting with him to negotiate a union contract.

There’s unfinished business at his Las Vegas hotel, 64 stories of Trump-brand glamour in the casino-economy capital where he celebrated a primary victory last month. Trump International’s owner, Trump Ruffin, is in a legal battle with Unite Here, which represents hospitality and culinary workers on the Las Vegas Strip. Trump’s workers have already cast their ballot to unionize their workplace, with a majority of the roughly 520-member bargaining unit voting to unionize last December. But they can’t seal the deal because their boss refuses to recognize the results of their democratic election.

Trump Ruffin has stalled the unionization process with an ongoing National Labor Relations Board (NLRB) dispute over claims of unfair labor practices throughout the union campaign. But a hearing officer recently ruled in favor of the workers, and the union is confident their clear majority vote will ultimately be certified. Trump Ruffin has appealed the case, however, and the next hearing is scheduled for April.

According to Unite Here, Trump’s Las Vegas workers typically earn about $3.33 less per hour than their unionized counterparts and pay far more for healthcare and other benefits compared with the low-cost health and pension plans the union offers. At Trump’s hotel, hourly base wages for the largely immigrant frontline workforce can range from $9 to $18 (a living wage in the region for an adult with a child is about $23 per hour).

In the legal fight that stands between the workers and a union, the latest filing involves charges that Trump Ruffin systematically intimidated pro-union workers, through employment discrimination, and the use of consultants and supervisory staff to dissuade and deter their campaign.

According to the general counsel’s filings, a consultant with the union-busting campaign firm Cruz & Associates allegedly told workers last November “the Union would not help its employees,” and that “it would be futile for them to select the Union as their bargaining representative.” Workers were also allegedly promised better promotion opportunities “if they abandoned their support for the Union.”

Unite Here charged the management with illegal retaliation against pro-union employees and interference with organizing activity. This case is the latest round in a legal battle that has lasted throughout the union campaign and led to two settlements over the labor disputes in 2014 and 2015. Workers repeatedly complained about mistreatment of and intimidation against those who campaigned for Unite Here. Despite the hostile atmosphere, the workers campaigned relentlessly for months. The employee dining room became a hive of pro-union activity, with workers donning yellow and red buttons that signal union support and distributing pro-union literature. This in turn, however, made the canteen a contested space for Trump-style aggressive retaliation.

In addition to charges of employment discrimination, the union has complained of aggressive interrogation and “illegal surveillance.” To thwart the campaigners, according to the filings, the higher-ups reportedly once sent home workers seen donning pro-union buttons and confiscated union literature, and security aggressively questioned organizers in the parking lot. In one instance, managerial staffers “conspicuously greeted employees in the employee dining room and told them to vote No” to the union.

But since the campaigners voted to unionize by a narrow majority, the company has continued to try to block the certification process through litigation. And they wonder why the master deal maker who ran the Apprentice empire—and was so quick to broker legal settlements a few months back—now seems so resistant to simply honoring the election results and negotiating with the union.

Unite Here spokesperson Bethany Khan noted another election victory last year at the Trump hotel in Toronto, and pointed out that Trump’s partner, Phil Ruffin, also runs a union hotel on the Strip, Treasure Island. “We’re not sure why Mr. Trump won’t negotiate a contract with his workers,” she tells The Nation. “He says he’s a great negotiator. And we’d love to sit down and negotiate with him.”

In the most recent round of NLRB proceedings, the company has rebutted the workers’ claims as baseless, arguing that the perceived surveillance and security altercations were routine business operations. In October, Trump’s legal team filed a separate lawsuit against the union, complaining that a pro-union campaign poster dishonestly maligned the company’s reputation.

The management has apparently also launched a low-fi campaign website to Keep “Trump Union Free,” contending that the city’s “amazing” prosperity was threatened by “corrupt organizations who use local workers for personal gain.”

Yet Trump’s hotel is an anomaly in Las Vegas, where the massive hospitality and leisure industries are heavily unionized (making Sin City an unexpected labor oasis in the Southwest). Indeed, Trump, as a true businessman, seems to have no ideological aversion to unions, since Unite Here has also organized his famous Manhattan hotels (he boasted to Newsweek last year about how well he got along with labor when doing business in “mostly unionized” New York).

Now both Trump Ruffin and the union are waiting for next month’s NLRB hearing to take place, while candidate Trump barrels toward the April primaries. And Unite Here will keep staging demonstrations at Trump’s campaign stops to pressure him to come to the table with his Las Vegas workers, as he has with other union shops in his portfolio.

In a statement on the eve of his now-infamous aborted rally in Chicago last week, protesting Unite Here workers declared: “Las Vegas workers say to ‘Make America Great Again,’ Trump should start by negotiating with them a fair deal, like his company made with its Canadian workers.”

Whether or not Trump can prove to voters he’s presidential material, his Las Vegas workers are determined to challenge his credentials as a boss. With their hard-fought union vote in hand, they’re making him an offer he can’t refuse.