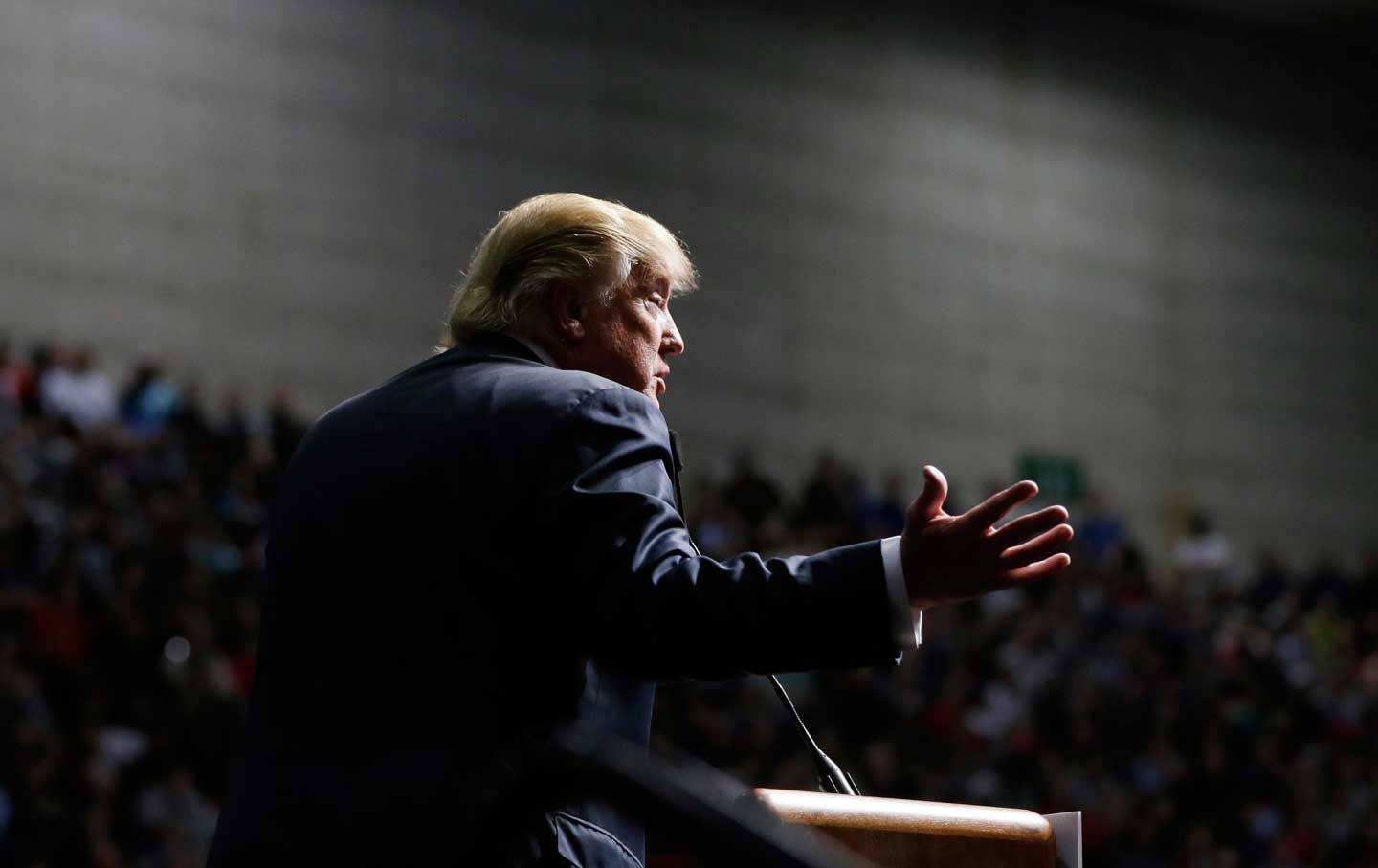 Let’s admit it. As political provocateur, Donald Trump has a dizzy kind of genius. He feints to the right, then he spins to the left. Either way, the hot subject for political chatter becomes Donald Trump.

This week, while people everywhere were fretting over his violent talk, the candidate came to Washington and dropped a peace bomb on the neocon editorial writers at The Washington Post and the war lobby. Trump wants to get the United States out of fighting other people’s wars. He thinks maybe NATO has outlived its usefulness. He asks why Americans are still paying for South Korea’s national defense. Or Germany’s or Saudi Arabia’s.

“I do think it’s a different world today and I don’t think we should be nation-building anymore,” Trump said. “I think it’s proven not to work. And we have a different country than we did then. You know we have $19 trillion in debt. We’re sitting probably on a bubble, and, you know, it’s a bubble that if it breaks is going to be very nasty. And I just think we have to rebuild our country.”

“I do think it’s a different world today and I don’t think we should be nation-building anymore.”—Donald Trump

Will anybody give him an amen? Yes, lots of folks. People who read The Nation (myself included) have been saying something similar for a long time. So have libertarian Republicans on the right. But this sort of thinking is mega-heresy among the political establishment of both parties. The foreign-policy operators consider themselves in charge of the “indispensable nation.”

This new Trump talk is definitely career-threatening for the military-industrial complex. It was particularly playful of Trump to choose The Washington Post as the place to drop his bomb; after all, it’s the Post that has made itself such a righteous preacher for endless war-making.

The Donald, usually bellicose in style and substance, is singing, “Give peace a chance.” What does his detour portend for national policy? We can’t know for sure, since Trump also has a tendency to casually contradict himself before different audiences. Later on the same day, he addressed AIPAC’s convention and sounded like a warrior for Zion. He got thunderous applause after making the ritual promises that candidates from both parties always make at AIPAC meetings.

But Trump has, in his usual unvarnished manner, kicked open the door to an important and fundamental foreign-policy debate. It is far more profound than the disputes we usually hear between hawks and doves. He’s proposing a radical standard for testing US policy abroad, both in war and peace: Is it actually in America’s interest? Or has US global strategy become a dangerous hangover from the glory years, when Washington armed and organized nations for the Cold War?

Trump has, in his usual unvarnished manner, kicked open the door to an important foreign-policy debate.

Whatever happened in past decades, Trump insists that this US ambition always to be in charge is now actively damaging our country, wasting scarce treasure and drawing us into other people’s conflicts. The Post opinionators must have choked on his words.

“I watched as we built schools in Iraq and they’d be blown up,” Trump told the editors. “And we’d build another one and it would get blown up. And we would rebuild it three times. And yet we can’t build a school in Brooklyn.… at what point do you say hey, we have to take care of ourselves. So, you know, I know the outer world exists and I’ll be very cognizant of that but at the same time, our country is disintegrating, large sections of it, especially in the inner cities.”

Trump has thus shrewdly articulated what ought to be a vital subject for debate in 2016. Instead, I suspect, he will be inundated with lordly rebukes by the policy elites. And the editorial writers will explain how half-baked and dangerous his ideas are to the future of mankind.

We can imagine the labels they’ll haul out from history: Protectionist. Nationalist. Isolationist. America Firster. His challenging proposition reminds me of my childhood, because I grew up in idyllic small-town Ohio, where those skeptical views of “foreign entanglements” defined the Republican Party (there weren’t many Democrats in my home town, and they mostly kept quiet).

As teenagers, we grew up as Robert A. Taft Republicans and deeply suspicious of the “Eastern Establishment,” who looked down on us as Midwestern bumpkins. The decisive election was 1952, when Taft lost the GOP nomination to a genuine national hero, Gen. Dwight Eisenhower. We were heartbroken. In the Midwest we lived in the middle of a great big country and could reasonably feel that we should stay out of other people’s troubles. The Cold War pretty much destroyed that common sense.

Ike’s victory ratified America’s commitment to developing a new world order of global alliances and foreign military deployments. That order seemed like the right thing to do 60 years ago, but now it falls to an outsider named Trump to demand fundamental reconsideration.

I suspect most Americans would agree with Trump’s tough questions, but are not sure of the answers (neither, perhaps, is he). Plus, in these insecure times, people do not wish to sound unpatriotic. In my hometown, we quickly fell in love with Eisenhower the moderate Republican, who resisted the party’s hard right (who thought Ike was a commie).

At the end of his second presidential term, Eisenhower, the general who won World War II in Europe, was warning us about the dangers of something he called the “military-industrial complex.” I wonder what he would tell us today.