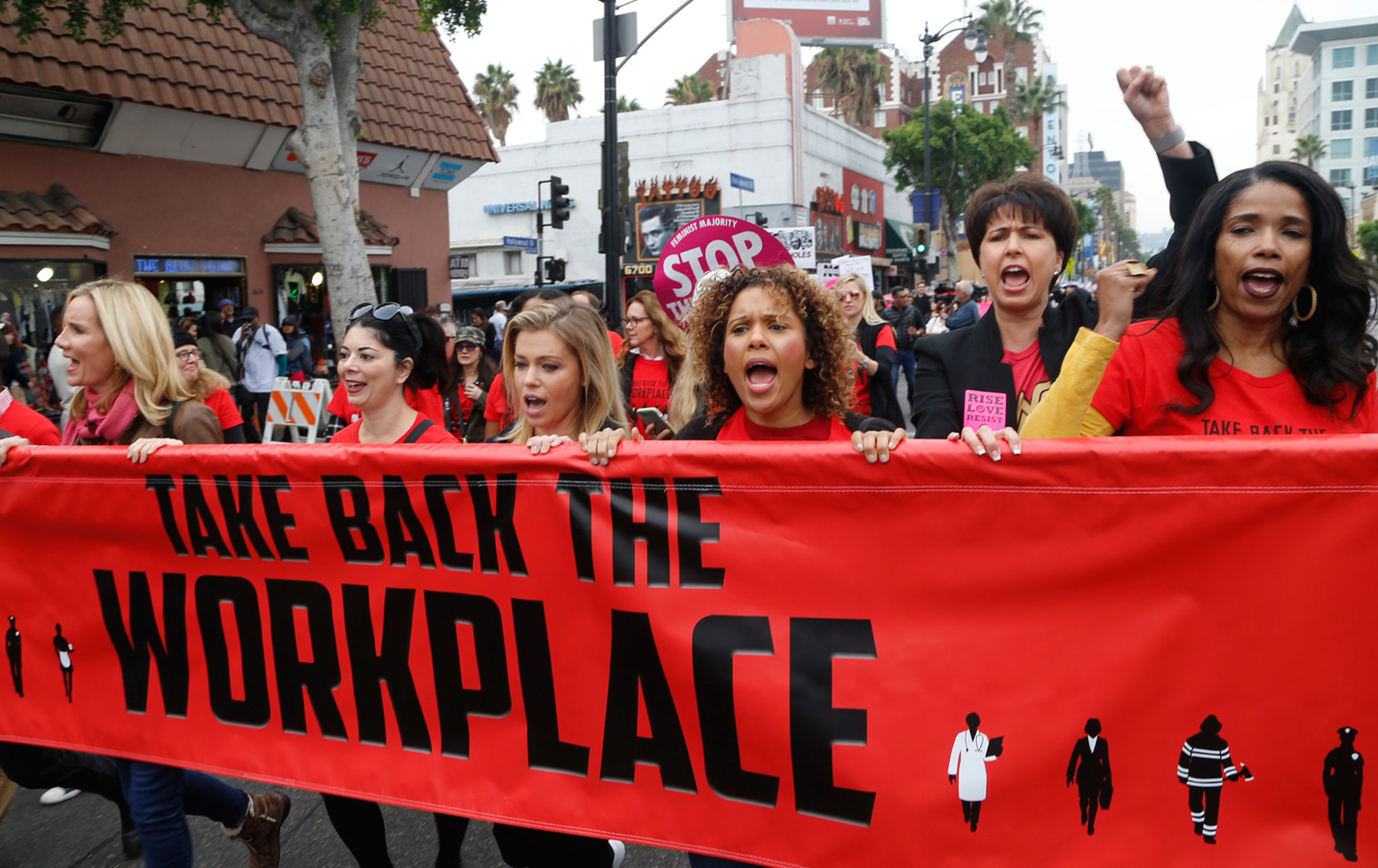 Katie Roiphe’s Harper’s Magazine article about #MeToo, “The Other Whisper Network,” has been so thoroughly dismantled by Rebecca Traister, Michelle Goldberg, Christina Cauterucci and others that there’s not a whole lot left to say. Her quotes are selective and distorted. She’s a terrible journalist, just at the basic factual level. (She cites as fact the long-exploded story of Johnathan Prevette, a little boy supposedly suspended from school in 1996 for “sexual harassment”—giving a little girl a kiss on the cheek. He was never suspended; no one at school called it sexual harassment—that term was applied when his parents took him on the talk-show circuit. And, also, the little girl complained.) She slides past the fact that the pre-publication uproar on Twitter was not about the article itself but about the well-founded belief that Roiphe was planning to out the originator of the Shitty Media Men list, Moira Donegan, possibly subjecting her to Gamergate-type stalking.

Most obviously, the things she claims her friends will only whisper off the record, or as Roiphe dramatically calls it, from “deep anonymity,” are things that have been said, in print, a lot. Al Franken got a raw deal. “Believe all women” is not a perfect guide to truth (the phrase is actually “believe women”). #MeToo has gone too far when the SMM list cites a man for “creepy DMs.”#MeToo infantilizes women and denies their agency. These points have been widely made in newspapers and magazines by, among others, Daphne Merkin, Bari Weiss, Masha Gessen, and Caitlin Flanagan. Many #MeToo supporters, including myself, have expressed some ambivalence about where this is all headed. (There’s quite a rich conversation going on among feminists. Maybe Roiphe and her friends need to read more widely.) Roiphe’s claim to have been silenced herself is absurd. (“I have a long history with this feeling of not being able to speak,” says the celebrated self-styled contrarian and tenured professor of journalism.) In the week since “The Other Whisper Network” came out in one of the most prestigious magazines in the country, Roiphe has appeared on CBS and was respectfully interviewed on NPR and in Slate.

I ‘d like to make two points. First, the core of #MeToo has not been anonymous, unverified free-for-alls like the SMM list or “Grace’s” awful date with Aziz Ansari, fun as those are to discuss. It’s been people coming forward whose accounts were then investigated by real journalists in serious publications like The New Yorker, The New York Times, The Guardian, Variety, and The Washington Post. That is how we know about Harvey Weinstein and Matt Lauer and Louis C.K. and Mario Batali—and, for that matter, Donald Trump. What lends #MeToo weight is the sheer amount of testimony by people using their own names—not “deep anonymity”—as well as the fact that many men have been accused by multiple women with similar stories. The United States may sometimes operate a bit as if under Sharia law, for which it takes the testimony of two women to equal that of one man. But now it turns out that two—or more!—women are willing to speak up.

Second, #MeToo is not about “Victorian” maidens unable to deal with the occasional leering guy in the office. It is not about hysteria, what Roiphe calls “the weird energy behind this movement.” It is not a sex panic.

The End of Men’s ‘Freedom to Bother’

Sex panics have happened before. In the 1980s and ’90s dozens of daycare workers and others, most of them working class, were accused of molesting children and Satanic ritual abuse. Quite a few went to prison for many years. The 19-year-old Massachusetts daycare worker Bernard Baran, for example, about whom I wrote in The Nation several times, was charged with rape and indecent assault. He was sentenced to three life terms in 1985 and served 21 years (his conviction was only set aside in 2009). A lot of them were convicted on extremely sketchy testimony—sometimes involving “recovered memory” and hypnosis and therapeutic methods that have now been discredited. The mantra of the day was “Believe the Children,” but in many of these cases, the children were basically not believed when they said nothing happened. Instead, they were bullied and manipulated into giving evidence by police and therapists convinced that only “disclosures” were true.

Right now, in fact, we are in the midst of a sex panic. Over 200,000 (!) children as young as 8, girls as well as boys, have been put on sex-offender registries, often for mere sex play. Thousands of convicted sex offenders are currently being kept in detention after serving their sentences on the theory that they will offend again if released. Where’s the due process in that? In some states, rules about where people convicted of sex crimes can live are so strict they end up homeless.

It would be easier to take Roiphe’s worries more seriously if she had shown any interest in these undeniably real examples of sex-related miscarriages of justice. Of course, that would require actual research and reporting, not just stringing together anonymous quotes from her friends, but after all, she is a professor of journalism. She might even find grist for her mill; feminism is not without blame in some of these cases. Ill-trained therapists too quick to see normal childhood behavior as proof of sex abuse—and too quick to attribute adult women’s problems to repressed memories of the same—destroyed quite a few lives.

The difference between those panics and #MeToo is that sexual harassment is real. There were no Satanic ritual abusers. Daycare centers were not hotbeds of pedophilia. Hounding people convicted even of minor sex offenses to the point where they can’t rent an apartment does not keep anyone safe. Even Roiphe admits that what #MeToo describes as sexual harassment actually happens. She just thinks women are making too big a fuss about it and injuring men’s careers.

About those careers. Roiphe attacked n+1 editor Dayna Tortorici for tweeting “I get the queasiness of no due process. But…losing your job isn’t death or prison.” That does sound a bit unfeeling. True, everyone’s alive and no one is in jail (yet). Weinstein, who makes the creepy-DM guy seem like a pesky little brother, is currently residing at a fancy therapy center in Arizona, from which he recently issued a broadside calling Rose McGowan a liar. But losing your job is a big thing. Not every man accused of harassment is fired—far from it—but it’s not possible to say that every man who was fired deserved it. Being fired is not the same thing as being convicted of a crime, but even so, we should want the workplace to be fairer, more transparent, more just. Let’s not forget, though, that that is exactly what the world of work has not been for the thousands and thousands of women who have been hounded out of their jobs and careers by harassment and by the fact that harassment is not just a matter of unfortunate incidents. It has a systematic effect on women in the workplace. It keeps them down both as individuals and as a class of workers. It is, for example, a major reason that women leave scientific fields and Silicon Valley.

As I wrote a few weeks ago, the unfortunate fact is that people are fired, pushed out, forced out, and dropped all the time. Publishing is notorious for that. Lorin Stein, former editor of Paris Review, resigned in the midst of accusations of harassment. Roiphe thinks that was unfair because he was a gifted editor who published many women writers. But a previous editor, Brigid Hughes, was also a gifted editor who published many women, and she was fired because the men on the board wanted a “Young Turk,” i.e., a man—and no one thought anything of it. In fact, until #MeToo, Hughes was pretty much erased from Paris Review history.

Roiphe’s “weird energy” is #MeToo’s “Why should I have to put up with that?” For a long time, women had to deal with behavior that sexualized them and trivialized them, made them anxious and unhappy and self-doubting and sometimes got them fired or forced them to quit. It was the price they paid for venturing out of the home. It helped keep women out of male-dominated fields and in the lower ranks of fields into which they were admitted. Now that women are in the workplace in huge numbers and for life, with qualifications equal to any man’s and talent and ambition to match, the rules have got to change. #MeToo represents a kind of collective aha moment when women, after years of being told their stalled prospects were their fault, suddenly realize that it’s not us, it’s them.

Why any woman would want to derail that realization is beyond me.