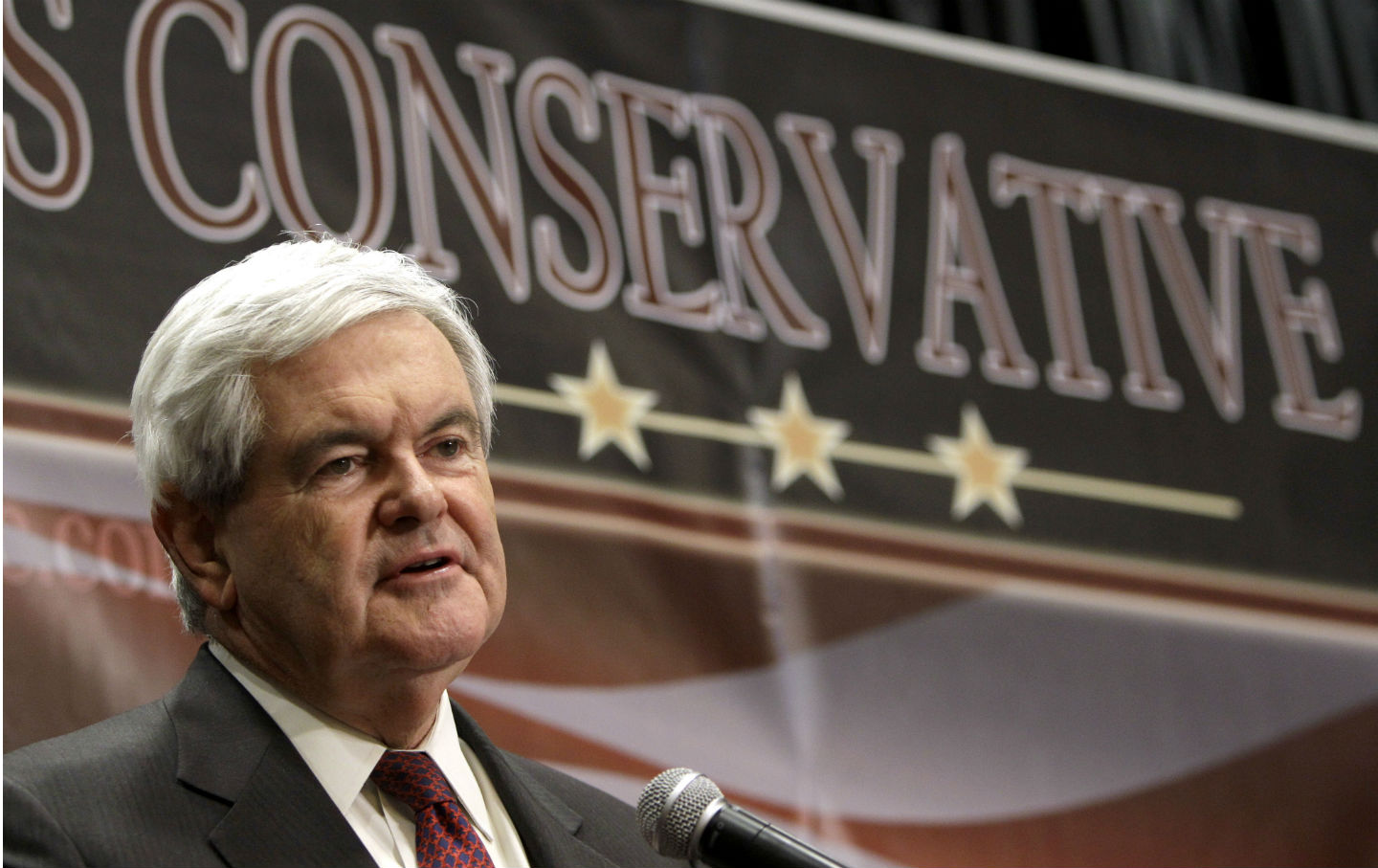 There was an awkward moment midway through Thursday’s Bipartisan Summit on Criminal Justice Reform, out in the hall of a vast Washington hotel. Van Jones, the liberal activist and former Obama adviser, stood shoulder to shoulder with Mark Holden, the general council for Koch Industries; Matt Kibbe, CEO of aTea Party–aligned FreedomWorks; and former Speaker of the House Newt Gingrich, who is now part of the Right on Crime campaign. They were discussing the rare left-right coalition that has assembled around the problem of mass incarceration, and whether it might spark congressional action.

“This is fundamentally different than immigration reform,” Gingrich said, after a reporter brought up the failure of that recent, briefly bipartisan effort. “There’s a much, much bigger consensus—more like welfare reform.”

It was a bracing reminder that cooperation across the aisle is only as good as the policies it produces. Mass incarceration, after all, was a thoroughly bipartisan project. Richard Nixon started the War on Drugs, but the 1994 Violent Crime Control and Law Enforcement Act—“one of the broadest expansions of the criminal-justice system in national history,” as Michael Ames describes it—was written by Joe Biden, then the chairman of the Senate Judiciary Committee, and signed by Bill Clinton.

Many reformers on the left are optimistic that this time the bipartisan consensus will tilt in a progressive direction. “Obviously I was not in favor of welfare reform…but I think [Gingrich] is right in terms of it having hit a tipping point,” Van Jones told me later. “Not the substance, but the dynamics are very similar. You have an idea that started out only on the right and eventually won over a critical majority on the left with welfare reform. Here you have an idea that really started out as a concern of the left and it’s now got a critical mass on the right, and because of that, you can probably pass something this year.”

That seems to be the most specific goal shared by the various factions assembled at the summit: to pass some kind of reform legislation in the small window before the 2016 elections. There are a number of piecemeal bills on the table, including the Smarter Sentencing Act to reduce mandatory minimums for nonviolent offenders; the REDEEM Act, which would give people with criminal records an avenue to sealing those records and lift the ban on public assistance for people with felony drug convictions; a proposal to provide resources and alternatives to incarceration for mentally ill offenders; and a more moderate sentencing-reduction proposal that would allow some prisoners to get time off for participating in job training, drug counseling and other “recidivism reduction” programs.

“There’s a lot of good legislation and a lot of good energy,” Democratic Senator Cory Booker told the audience at the summit. “But I’m telling you there’s tremendous work to do to get those bills through the committee and onto the floor.” Cracking old-school, tough on crime lawmakers like Chuck Grassley, the Iowa Republican who chairs of the Senate Judiciary Committee, is the most immediate challenge to passing legislation this year. Still, there was plenty of optimism that the dinosaurs would lose eventually. “Everyone is going to be in favor of some kind of criminal justice reform” in 2016, Gingrich told a group of reporters. “When it comes up in the debates, it’ll be variations on the theme, and the general theme will be ‘yes, that’s right.’”

The summit was designed to be a show of strength and unity. Accordingly, it did not much address those potential “variations,” or the serious question of how far the disparate and in some cases conflicting ideologies of the groups backing reform can carry it. For instance, it’s hard to know what to make of the contribution of Bernie Kerik, former commissioner of the New York City police and the city’s Department of Corrections. Kerik was convicted of tax fraud and corruption in 2009 and spent three years in a minimum-security prison in Maryland, an experience he described at the summit as “dying with your eyes open.” Now Kerik is launching a 501(c)4 nonprofit (also known as a dark-money group) called American Coalition on Criminal Justice Reform. But then here’s Kerik in Time magazine just a few months ago, waving away the deaths of Michael Brown and Eric Garner at the hands of the police, and warning readers about a “war…as dangerous as any global enemy we face,” by which he means a war on cops. Is there a road to reform that skirts racial justice?

Despite Gingrich’s insistence at the summit that there’s “no question” that the primary motivation for conservative supporters of prison reform is moral, what they’re mainly selling is smaller government. As then–Texas governor Rick Perry said succinctly at the 2014 Conservative Political Action Conference, “Shut prisons down. Save that money.” There are reasons to be concerned that framing the problem as a budgetary rather than a social one will only perpetuate the system of punitive justice. Privatized alternatives to incarceration—probation, parole, drug testing services, specialized courts—have been criticized as extensions of state surveillance and for giving corporations yet another way to prey financially on the poor.

University of Pennsylvania political scientist Marie Gottschalk discussed this push “to expand the ‘prison beyond the prison’” recently in a long and worthwhile interview with Jacobin. Gottschalk, the author of Caught: The Prison State and the Lockdown of American Politics, doesn’t take very seriously right-wing prison reformers like Perry who say they want to help the poor and save the state money yet refuse millions of federal dollars to expand Medicaid. She’s also critical of the focus on the War on Drugs, and makes the case that to really dent prison populations, lawmakers will have to look beyond nonviolent offenders to the kind of cases bound to make politicians squirm: child pornography, homicide. (Cory Booker brought up the classification of violent offenders at the summit, to his credit.)

More broadly, does it matter that the right is using criminal-justice reform to legitimize its broader anti-government ideology? Gottschalk seems to think so. “Today’s left/right kumbaya moment on criminal justice reform rests partly on what I call the pathologies of deficit politics,” she says. “Hitching the movement against mass incarceration to the purported fiscal burden of the carceral state helps reinforce the premise that eliminating government deficits and government debt should be the top national priority.”

I asked Gingrich whether he thought that any savings from shrinking prisons should be reinvested in education and other policies to reduce poverty. “A certain amount of this money has to be re-allocated particularly in the mental-health area, but also, frankly, in the retraining of people who were first time offenders,” he said. “If there’s surplus after that, I think it’ll go to reduce the deficit or to reduce debt.”

For now, many reformers on the left are ignoring the contradictions and limitations of their partners on the right in order to get the ball rolling. “The vote total is what I care about. There’s no asterisk on the vote total if some of these people are opportunists,” Van Jones said when I asked whether there is any danger that politicians jumping on the reform bandwagon to troll for minority votes might lead to weaker reforms. “If somebody’s sitting in a prison cell someplace doing thirty years for a nonviolent drug offense, are they going to care why somebody voted to shorten their sentence? They probably aren’t…. It’s a sign of a certain kind of comfort or almost, what do you call it—‘affluenza’ on the left to be primarily concerned with the motivations of the people who could actually vote this year.”

Jones is right: it would be petty to ignore that the coalition pushing for change in the criminal-justice system has the potential to impact real lives for the better. It would also be easy, amidst all the excitement, to overestimate what’s on the table. I asked Gingrich whether he would support any form of reparations to individuals or communities who’ve suffered on account of the War on Drugs and harsh sentencing. “No, I’m against trying to get involved in that kind of complex redistribution,” he replied, looking somewhat befuddled. “It teaches very bad habits.”