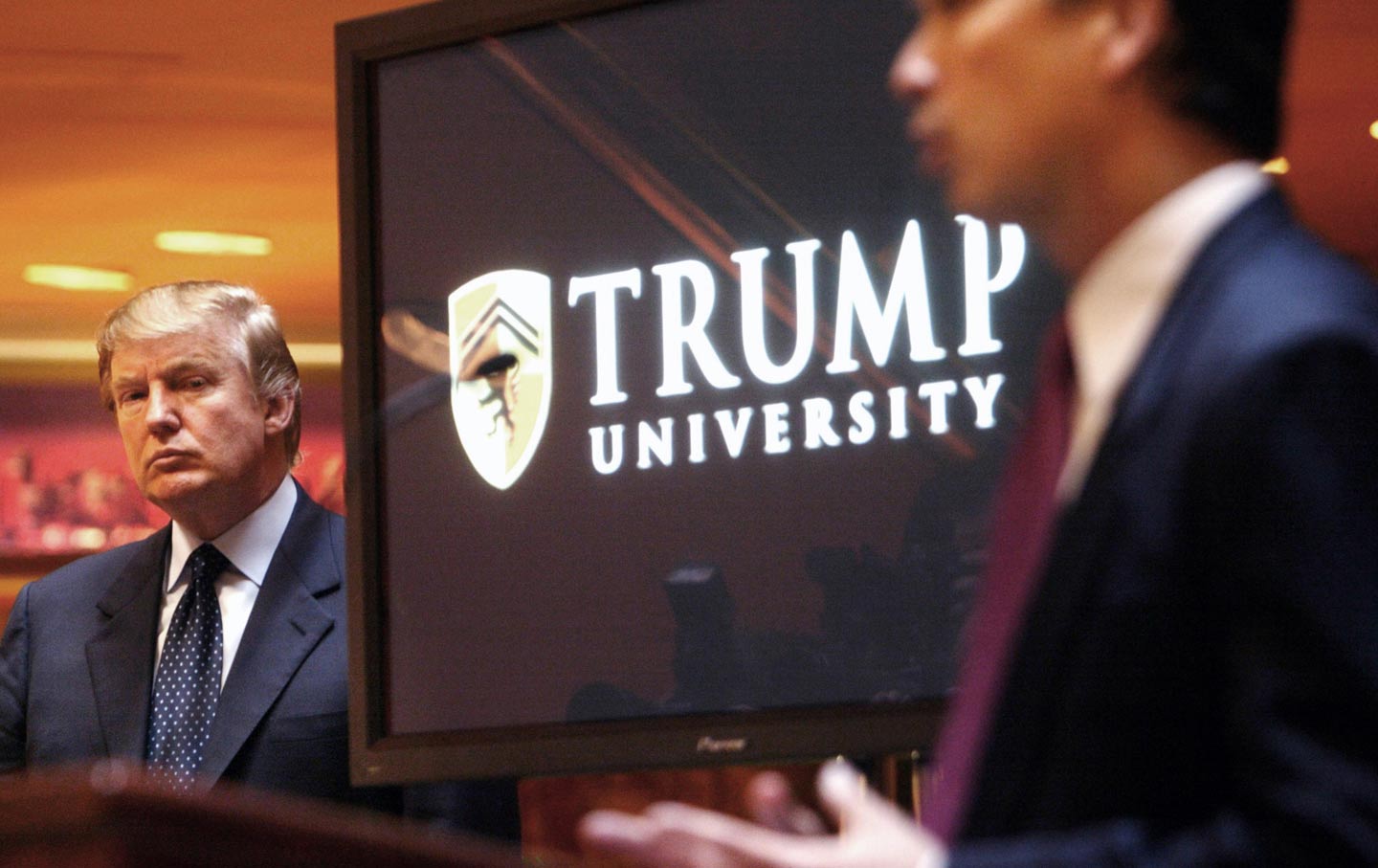 The complaints fill hundreds of pages, a chorus of passionate and often irate voices decrying the alleged loss of thousands of dollars to seminars and online courses that promised to provide them with a “billionaire’s road map to success” and other tools of wealth accumulation.

“I paid 12000.00 for a real estate course in December 2008,” wrote an Anaheim, California, resident in a complaint that was filed with Florida’s Attorney General in January 2010 and later forwarded to Texas’s attorney general. “I received nothing. I have called repeatedly to get a refund from this company. Every time I call I can only speak with the front person that answers the phone. I’m told they will send my paperwork to a higher up that I am not allowed to speak to. They say I will get a call back. I never do. I have been trying to get this resolved for over a year. I think this is a big scam. Can you help me?”

This former student’s lament is one of more than a hundred complaints against Trump University and its affiliated company, the Trump Institute, obtained by The Nation through a public-records request to the office of the Texas attorney general. Trump U (later known as the Trump Entrepreneur Initiative) is the now-defunct get-rich-quick venture launched by Donald Trump in 2005. The Trump Institute, which reportedly paid the billionaire businessman franchise fees to host seminars under his name (and toward which many of the complaints are directed), promoted opportunities like “wealth building weekends” with a “Trump-certified instructor” and a 320-page workbook “filled with valuable strategies for building wealth through real estate and business.”

“It is clear the Trump ‘University’ is as fraudulent and fake as Donald Trump’s ‘hair.'" — Former Trump U student

In the summer of 2010, Greg Abbott, Texas’s then–attorney general (now governor), was taking a close look at Trump’s schools. And he wasn’t the only one: It turns out that law-enforcement authorities across the country were examining—and corresponding about—Trump’s educational endeavors, which have been since accused in lawsuits of posing as legitimate university courses to swindle desperate students out of money on false promises to unlock Trump’s secret to financial success.

The Texas attorney general never took enforcement action against Trump’s schools, but, by 2011, Abbott’s office had said that Trump University had agreed to no longer operate in the state. By the time Abbott had concluded his investigation, he had amassed some 400 pages of documents relating to complaints against Trump University and the Trump Institute. Among them were grievances that Florida’s attorney general had sent him as well as numerous filings from Better Business Bureaus in Florida and New York, where Trump University and its affiliates had set up offices.

“please help me,” wrote a former student seeking the Florida attorney general’s assistance in getting a full refund from the Trump Institute. “I was laid off work for the first time in my life and really need this money to support my family. $1,400 is so much money for my family.”

The records Abbott compiled give a colorful survey of an array of grievances that Trump schools accumulated during their first few years of operation. As Donald Trump appears to be consolidating his lead for the Republican nomination for president, an ongoing million fraud lawsuit against Trump University filed by New York Attorney General Eric T. Schneiderman has loomed as one of the largest of his campaign’s potential challenges. Trump may even be called to testify at trial before the November election.

Although many of the complaints in Abbott’s records focus on the Trump Institute—which has generally received less scrutiny than Trump University, the subject of Schneiderman’s lawsuit—the grievances are strikingly consistent: false promises of prosperity, the illusion of serious pedagogy, little accountability. Many of the allegations describe a similar trajectory. After having signed over checks, many of them quite large, to the Trump school, a student expresses dissatisfaction with the quality of instruction and is then allegedly given the runaround or is stone-walled by unresponsive customer service representatives. In other cases, students who said they were clearly entitled to refunds claimed to be turning to authorities to get the school to pay up.

“[I]t is clear the Trump ‘University’ is as fraudulent and fake as Donald Trump’s ‘hair,’” wrote one woman, who claimed to have spent $38,671.10 on Trump University courses, in her complaint to New York State’s Better Business Bureau. “I have spoken to numerous other dissatisfied Trump students, and so I am not alone in my views on Trump ‘University.’” (Records show that Trump University responded by asserting that the woman had “been provided with the majority of the program she purchased” and went on to list several favorable remarks about the program that she had made. The school also apparently offered her a partial refund of $8,126.)

Perhaps most pronounced across the complaints is a shared tone of disbelief that the for-profit schools would refuse to refund customers’ money, given the quality of the programming, and a bewilderment at the lack of customer service care given to aggrieved customers.

“Spent hours placing calls, most times only able to leave message in general voicemail or was disconnected before we could leave message,” read one complaint, of a woman seeking a $19,000 refund after alleging that she had been mislead by the school’s advertising. “Trump Institute took our money, was virtually unavailable by phone, email or fax and has failed to live up to their agreement.”

"Trump Institute took our money, was virtually unavailable by phone, email or fax and has failed to live up to their agreement." — Former Trump U Student

The records from Texas also provide additional context for how different states have chosen to deal with allegations against Trump schools.

Last week it was revealed that, in 2013, the Donald J. Trump Foundation had improperly donated money to a political organization supporting Florida Attorney General Pam Bondi’s reelection, a gift that may have violated rules governing the political activity of non-profit foundations. The foundation’s gift to the pro-Bondi group raised eyebrows because it came only days after it was reported that Bondi was deciding whether or not to participate in Schneiderman’s legal action against Trump University, according to reports. Bondi’s office ultimately decided to not pursue any enforcement action against Trump.

This week, after it was reported that the gift to Bondi may not have been legal in the first place, her office responded to a new round of questions about whether political considerations affected Bondi’s decision not to pursue legal action against Trump’s schools. Asserting that the office’s decision had nothing to do with politics, Bondi’s spokesperson emphasized that Bondi had received only one complaint against Trump University.

It is worth nothing that the records obtained by The Nation show that by the time Bondi had taken office in 2011, her predecessor, Bill McCollum, had compiled more than a hundred pages of complaints and other documents, almost all regarding the affiliated Trump Institute, some containing considerable detail and attached exhibits. (These complaints were cited in a 2013 Orlando Sentinel story.) The allegations that McCollum had compiled were mostly filed with the attorney general’s office by out-of-state complainants, most likely because Trump Institute kept a PO box in Boca Raton.

Bondi’s office has said that, having forwarded its one complaint to Schneiderman’s office, it no longer needed to join the New York lawsuit, which includes people across the country who were allegedly defrauded by Trump University. A spokesperson for Bondi told The Nation that the New York “case has nationwide standing,” adding that “no other state attorneys general joined the suit or filed their own suit. These are facts that most reporters choose to leave out of their stories, as these facts hurt the false narrative.”

Meanwhile, Abbott’s Trump documents also contain nearly a hundred pages of complaints that had been submitted to Florida’s Better Business Bureau. “They convinced me and many others that we would get a good education and we would learn all the steps to real estate investing,” read one complaint about the Trump Institute from a woman in the Bronx. “It was misleading, it was misrepresented, it did not live up to its promise […],” she said, adding, “I have been scammed out of the money which was my savings.” (According to the BBB records, the Trump Institute responded to this complaint by alleging it had records of the customer not having expressed any dissatisfaction for a period of more than a year between 2007 and 2008, and that the customer had used the Trump educational “system extensively for over a year.”)

It’s important to note that the complaints in the Texas records are only allegations, and in many cases, it is not immediately clear from the records exactly whether or when they were resolved. Trump has asserted that a high percentage of his students gave overwhelmingly positive feedback and the critics represent a small portion of a large customer base. He has also responded by going after complainants who took legal action, including filing a lawsuit against one woman who had complained to the Better Business Bureau and later become a plaintiff in a lawsuit against him. (According to Time magazine, the court threw out the case and awarded nearly $800,000 in legal fees to the woman.)

The records show that in several instances, after customers got the Better Business Bureau involved, the Trump Institute did quickly relent and offered refunds. For one complaint alleging that the Trump Institute had withheld a $1,998 refund, and that calls to customer service reps went nowhere, the company refunded the customer roughly a week after the Better Bureau complaint was filed.