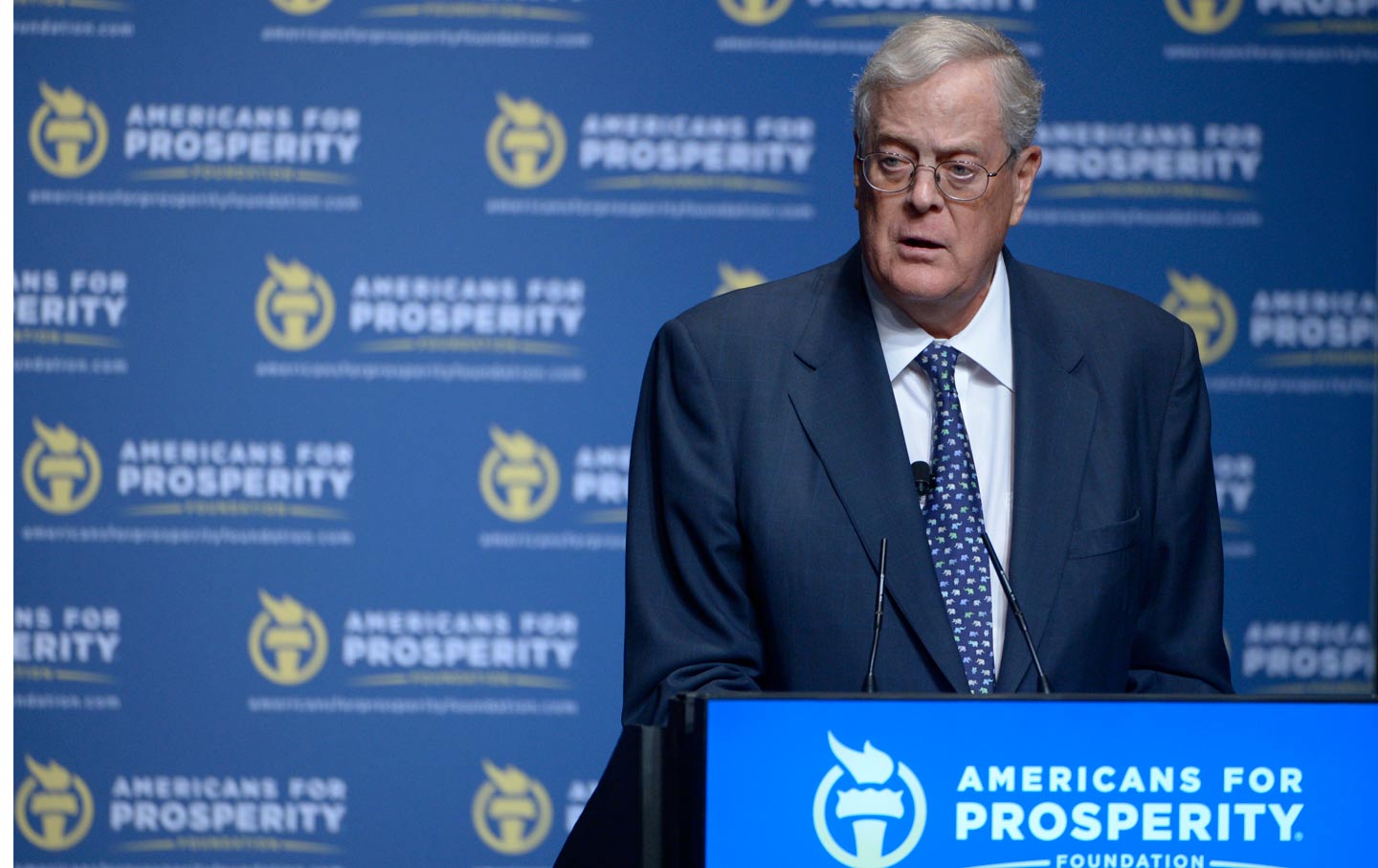 It’s no secret that America is experiencing a crisis of economic inequality, or that Congress and the Supreme Court have made it worse by inviting the nation’s wealthiest citizens to play a dominant role in politics. What remains largely hidden, however—thanks in significant measure to the decline of serious, in-depth political journalism—is the degree to which the super-wealthy have managed to seize control of not only the electoral process, but also many of the institutions that shape the political landscape.

I’m ashamed to admit that I had little understanding of the scope of the activities that Charles and David Koch have undertaken to mainstream their radical libertarian ideology until I read Jane Mayer’s pathbreaking account in The New Yorker in 2010. (I fought a losing battle on the jury of the National Magazine Awards that year to award it the prize in the reporting category.) Back then, the fantastic reach of the Kochs’ personal investments and subterranean funding network was difficult to track. It has since grown to a size almost impossible to imagine, with a sphere of influence that touches nearly every aspect of American public life. That’s the message of Dark Money, the authoritative book on the Kochs that Mayer has spent the past five years reporting.

The book arrived just ahead of a blizzard that paralyzed the entire Eastern Seaboard. I read it cover to cover in one weekend, snowbound, and found so many shocking aspects of the Kochs’ far-right netherworld that I couldn’t choose which was the most important to focus on for this column. That’s what makes thinking about the Kochtopus, much less trying to blunt its impact, so daunting. An octopus is actually too harmless a metaphor, as it has only eight tentacles with which to capture its prey. When it comes to stifling honest, well-informed democratic debate, the Koch network has at least a hundred times as many, each of which enjoys far more funding than the groups fighting back. I’ve been writing on different aspects of this network for three decades, and I still can’t quite believe its size and scope.

Those of us in opposition can only stand in awe and reluctant admiration of the Kochs’ ability to use their fossil-fuel-funded fortune to turn their dystopian dreams—in which billionaires and corporate chieftains do what they like with the rest of us, unburdened by any kind of financial, environmental, or political limitations—into a nightmarish reality. (The fact that their antiregulatory, anti-environmental agenda happens to serve the interests of the $86 billion they’ve so far amassed is, of course, mere coincidence.)

Mayer takes us through the weird Koch family history and places the brothers in relation to their precursors, including the conservative philanthropists John M. Olin, Richard Mellon Scaife, and Lynde and Harry Bradley. She also navigates the confusing world of the myriad organizations that the Kochs have founded and helped fund in order to shape America’s political, legal, intellectual, and cultural institutions—almost all of them with deliberately obfuscating names like the Center to Protect Patient Rights ($247.9 million from 2009 to 2013) and the American Future Fund ($76.8 million from 2009 to 2013).

If you think our problem is simply that the Koch brothers have constructed a shadow Republican Party that plans to raise and spend $889 million or so to elect a conservative president in 2016, then you have missed the proverbial forest for a single tree. Their network of super-wealthy conservatives is underwriting efforts to remake America’s state legislatures, universities, law schools, think tanks, public-television stations, and even its museums. The nearly $150 million that Sheldon Adelson spent in 2012 (according to Mayer) is chump change compared with the Kochtopus’s overall expenditures. And while virtually every mainstream journalistic accounting of their efforts mentions liberal billionaires who fund the opposition—and it’s always the same two, George Soros and Tom Steyer—neither the sums involved nor their funders’ strategic ambition can honestly be said to compare. The progressive side in America (which used to be called “labor”) has almost always been forced to fight without the financial resources of rich folk (or what used to be called “capital”). But never in our lifetimes have the scales been so lopsided or the power of money so enormous.

Mayer is not alone in her in-depth reporting on the rise of the new American oligarchy. Harvard professor Theda Skocpol, writing with an assortment of co-authors, has recently provided lengthy studies of the forces behind the Tea Party and the transformation of state politics. The New York Times’s Nicholas Confessore gave us a finely grained, nearly 3,000-word portrait of the right-wing takeover of Illinois politics (with the enthusiastic participation of Chicago Mayor Rahm Emanuel). And in The New York Review of Books, Michael Massing has offered up an extremely useful, nearly 10,000-word examination of the media’s coverage of the super-wealthy, with valuable suggestions on how we might improve it.

I mention these efforts in part for their rarity. Mayer’s book could have run a thousand pages without exhausting the topic. Yet the Kochtopus operates without scrutiny from all but a tiny number of publications. These outliers are increasingly imperiled in a media environment defined by disappearing resources and bite-size, easily tweeted articles. And many journalists have actively enlisted in the effort, most notably the hosts of MSNBC’s Morning Joe, who have treated the brothers as selfless do-gooders both on their program and at Koch-sponsored events.

A Washington Post review of Dark Money offers the hope that “it could inspire a more intense discussion about the impact of this wealthy conservative cadre on the Republican Party and the recent course of American politics.” It would be pretty to think so. But we see the future of Kochtopus governance in Rick Snyder’s criminal negligence vis-à-vis the poisoning of the water supply in Flint, Michigan, or in Scott Walker’s war on working people (including university students, workers, and faculty) in Wisconsin. No one can say we weren’t warned.