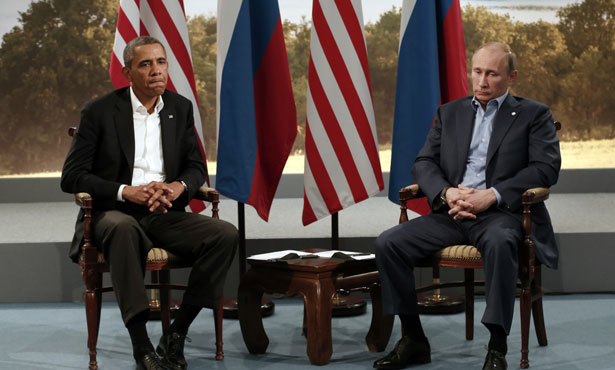 There are mixed signals aplenty between the United States and Russia, but it appears that various Western European leaders are doing their part to bring President Obama and President Vladimir Putin together and to avoid, at least, the worst possible outcome in the Ukraine crisis. Perhaps the best hope for finally ending the crisis will come when Putin realizes that his overreaching on Ukraine has had the unfortunate byproduct of strengthening and reinvigorating NATO, giving the United States new ammunition to demand that the Europeans increase their military spending. President Obama’s new talk of putting additional NATO troops in Eastern Europe—already rejected by Slovakia and the Czech Republic—and creating a $1 billion fund for military reinforcement in the region, is not a good sign for Europe and for future US-Russian relations.

Still, despite ongoing, Russian-inspired violence in eastern Ukraine, there are many hopeful signs. By and large, both the United States and Europe have resigned themselves to Russia’s land grab in Crimea, which is pretty much a done deal—and therefore, mostly, off the table as a point of contention. Putin, despite grumbles, has pretty much acknowledged that Petro Poroshenko will be Ukraine’s new leader, and by and large he’s accepted the results of the election that put Poroshenko into power, agreeing to send a top envoy to Poroshenko’s inauguration. In addition, the Russians have withdrawn some, but not all, of the forces they’d arrayed along Ukraine’s borders, easing tensions. And, not only did Poroshenko and Putin meet on the sidelines of the Normandy anniversary events, but Obama and Putin managed a short interchange, too, despite Obama’s rather churlish refusal to meet Putin formally. (Putin did, of course, have formal meetings with the leaders of Britain, France and Germany.)

Both leaders “have spoken for a prompt end to bloodshed in southeast Ukraine as well as for an end to military actions from both sides—from the side of the Ukrainian armed forces and the supporters of federalization of Ukraine,” said Putin’s press secretary, Dmitry Peskov.

And Peskov also gave this account of the brief meeting between Obama and Putin:

Despite that there was no separate meeting [scheduled], the leaders of the two states had an opportunity to share their views on the situation in Ukraine as well as on crisis in the east of the country. Putin and Obama have spoken for the necessity to reduce violence and military actions.

The Washington Post, which has its own propaganda value but which is closer to actual journalism than RT, reported that “the United States, Russia and Ukraine took small steps to ease tensions.” Earlier, before Obama and Putin talked briefly, the Post reported on the G-7 meeting by saying in its lead that “President Obama and other leaders meeting here offered an olive branch to Russian President Vladimir Putin,” and adding, “It was clear that the international big chill imposed on Moscow over its actions in Ukraine is starting to thaw.” But is it? Despite recent, apparently conciliatory actions by Putin, very, very serious problems remain.

The chance that a shooting war might erupt over Ukraine are virtually nil, and despite the resistance of some pro-Russian forces in eastern Ukraine, it’s likely that Poroshenko and Putin will agree to resolve the conflict without civil war or permanent division of the country. The leaders of Western Europe—and Europe’s Big Business—clearly don’t want the Ukraine crisis to interfere with business as usual. Despite pressure from the United States, France is going ahead with a $1.6 billion contract to sell advanced helicopter carriers to Russia. And both German Chancellor Angela Merkel, whose business community is deeply engaged with Russia, and Britain’s Prime Minister David Cameron—whose London serves as home away from home for many Russian billionaires—have been making efforts to ease the crisis. President François Hollande managed to engineer two separate dinners last night, one with Obama and another one with Putin. As The New York Times reported:

Earlier on Thursday, Mr. Hollande joined Mr. Obama, along with the leaders of five other major powers, in condemning Mr. Putin’s annexation of Crimea. But France, like other European nations, has economic reasons to maintain cordial relations with Russia. Despite explicit opposition from the United States, France remains on track to deliver two advanced warships to Russia in the coming years.

But Obama didn’t do much to help ease the crisis by setting what appeared to be a vague, four-week deadline for Putin to resolve the crisis. Though Obama didn’t specify exactly what steps Putin has to take, and although resolving the standoff may take many weeks or months, Obama warned that Russia may face new, tougher sanctions soon.Said Obama:

Russia continues to have a responsibility to convince them to end their violence, lay down their weapons and enter into a dialogue with the Ukrainian government.… On the other hand, if Russia’s provocations continue, it’s clear from our discussions here that the G-7 nations are ready to impose additional costs on Russia.… We will have a chance to see what Mr. Putin does over the next two, three, four weeks, and if he remains on the current course, then we’ve already indicated what kinds of actions that we’re prepared to take.

Despite Obama’s missteps, however, things could be a lot worse. Obama didn’t really set a deadline for anything, since he didn’t say what has to happen in “the next two, three, four weeks,” and in any case it will be difficult to impossible to get Western Europe to impose harsh economic sanctions on Russia. (Russia, after all, isn’t North Korea or Iran.) And so far at least Obama has resisted pleas from American hawks and from the government of Ukraine to supply Kiev with military aid. During his meeting with Poroshenko, Obama did the least possible, given the political circumstances surrounding their much-anticipated meeting, agreeing to provide Ukraine a piddling $5 million worth of “night-vision goggles” and other “nonlethal equipment.” It would appear, from all indications, that Obama is trying not to inflame the situation, whose resolution depends now on whether Putin and Poroshenko, the latter backed by the United States and Europe, can arrive at some amicable way to forget about Crimea and to set up a limited version of autonomy in Ukraine’s east.