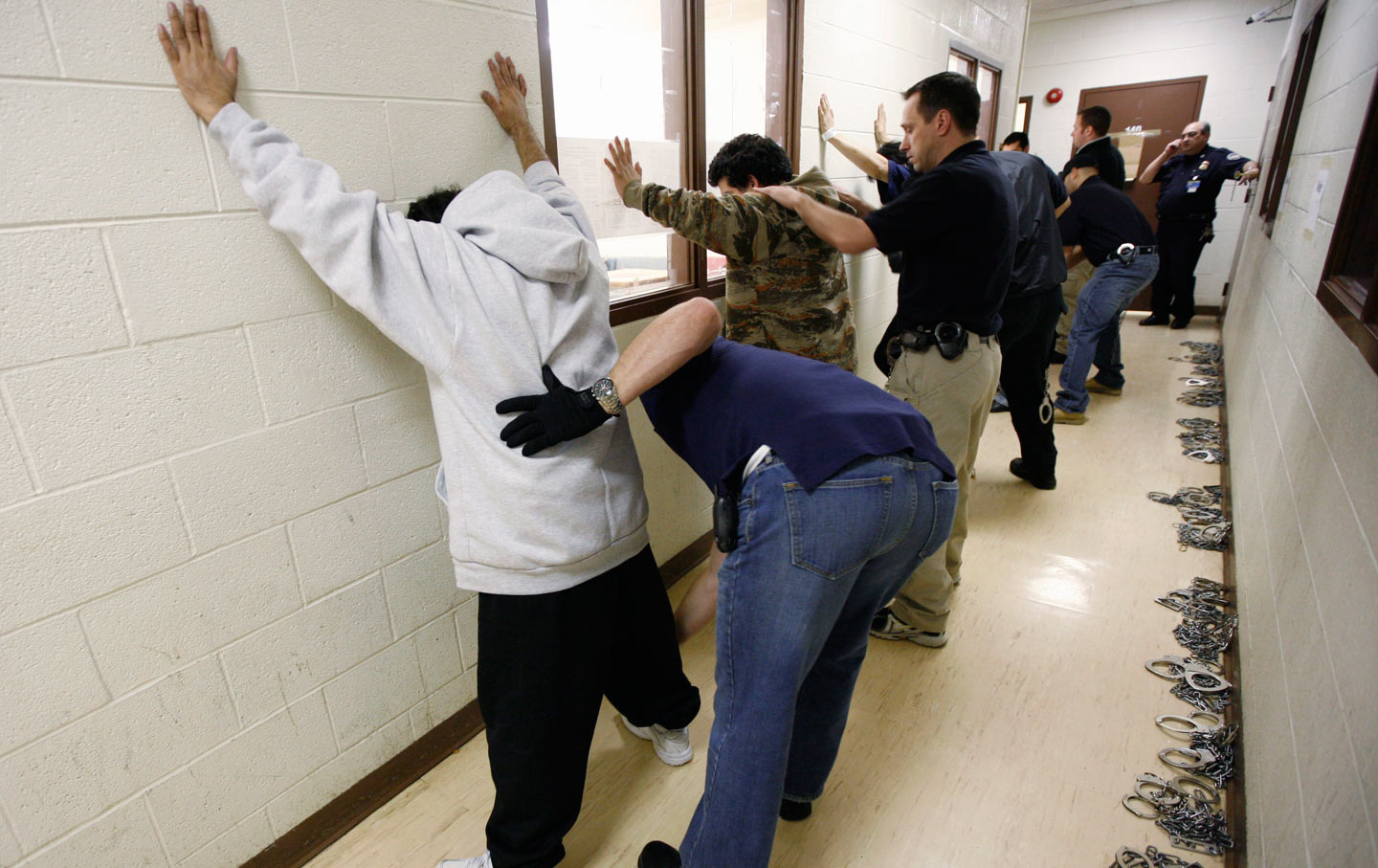 Immigrant detainees are patted down at the Immigration and Customs Enforcement facility in Broadview, Illinois, on March 14, 2008. (AP Photo / Brian Kersey)

The migrants crossed the Mexican border the same way thousands of others will this year, exhausted and desperate for relief. But when they encountered US immigration authorities, they spoke not of fleeing drug-war violence in Latin America but of seeking to escape political persecution on the other side of the world. They were refugees of a transnational migration crisis, representing the latest wave of social upheaval in Bangladesh now reverberating around the world.

Jahed Ahmed fled his hometown of Moulvi Bazar in northeastern Bangladesh, where he says he was targeted for his association with the opposition Bangladesh National Party (BNP). His connections led to the destruction of his father’s business and sent him fleeing to seek refuge abroad through a trafficking network. In a recent interview through an interpreter, Ahmed says he joined thousands of others on the harrowing journey from Asia through Central America to the southern US border—and ended up in detention last November, penniless and unable to communicate in his native language.

And while in custody, despite passing a “credible fear screening,” he says his asylum claim has been doomed because the US government had controversially branded the BNP a “third tier” terrorist organization—a label that human-rights advocates have challenged.

According to the Bangladeshi human-rights group Odhikar, many people like Ahmed are victims of political terror themselves, as violence has intensified since the BNP boycotted last year’s elections: “from January to June 2015, 148 persons were killed and 4,103 injured in political violence,” often abetted by the ruling party, including incidents of “enforced disappearance, extrajudicial killings” and torture.

According to Kazi Fouzia, an organizer with the South Asian American advocacy group Desis Rising Up and Moving (DRUM), traffickers have seized opportunistically on this chaos, promising to bring people to safety in the United States for a hefty sum. Statistically, though, they face extremely harsh odds. According to fiscal 2014 federal records, the US government received 584 asylum claims—more than double the previous year, but granted just 52 of the cases and denied 35.

Though most arriving through the US-Mexico border are Latin American migrants, Vice reported recently on rising migration from Asia via Mexico: as of mid-September, US authorities apprehended roughly 3000 Indians, Bangladeshis, Pakistanis, and Nepalis at the southern border, over triple the number apprehended in 2012. Many so-called “third country” migrants are detained as asylum seekers.

Ahmed says he tried to plead his case through a translator but was assigned one who did not speak his native language. “Whatever the judge asked me, he only gave me thirty seconds to answer,” he recalls. When he tried to respond, “the interpreter translated wrong,” which botched his asylum process from the outset. And since he couldn’t afford a lawyer, his chance of winning on appeal were dramatically reduced.

Fearing repatriation would lead to violence or death for him and his family, Ahmed began planning direct action with fellow Bangladeshi detainees at the El Paso Immigration and Customs Enforcement (ICE) processing facility in Texas. Serendipitously, they came across a story in a Bangladeshi newspaper of another detainee who had campaigned successfully for release from ICE custody. As they planned their own campaign they got in touch with DRUM through contacting the newspaper. After coordinating with the group in mid-October, 54 El Paso detainees, mostly from South Asia but also some from Latin America, some of whom had been languished in detention for months, launched their hunger strike on October 14 to demand fair treatment and fair hearings. DRUM and the advocacy network Not One More helped publicize the campaign, attracting nationwide support, press coverage, and inspiring other detainee strikes.

A wave of hunger strikes has spread across the immigration detention system in recent months. Earlier this month, hundreds of other detainees in Texas and California facilities have also launched hunger strikes, both to protest inhumane conditions, such as inadequate medical care and solitary confinement, and demand immediate release.

Asian Americans Advancing Justice, ACLU of Southern California, and other legal advocates, have issued a memorandum to the Department of Homeland Security (DHS) and other officials criticizing the government’s “pattern and practice of improperly denying parole to Bangladeshi asylum seekers in immigration detention.”

After several days of refusing food, the El Paso strikers met with the Bangladesh consular in an odd gathering between representatives of the very government they were fleeing and the government seeking to deport them. A set of agreements soon emerged allowing for the eventual release of 41 strikers, including 35 Bangladeshis. According to the consular press release, 17 facing immediate deportation would be allowed to appeal their cases, with help from community advocates who would arrange attorneys. About 38 remain detained, DRUM reports; others have been released or transferred. Ahmed was released, but may still face deportation. Overall, all the detainees face an unclear legal fate. An additional 14 South Asian detainees meanwhile held a 12-day hunger strike in solidarity at the La Salle detention facility in Louisiana, but recently ended the action, citing inhumane treatment and an impasse in pressing their demands with ICE.

In another bizarre twist, according to DRUM, the Bangladesi officials’ meeting led to the detainees’ photographs with consular officials getting picked up by Bangladeshi press. The young men then became a political flashpoint in Bangladesh, as both pro- and anti-government factions hotly debated their case in the media. The notoriety has placed them at even greater risk of persecution, DRUM warns.

DHS refrained from commenting on individual cases, but stated via e-mail to The Nation that regulations ICE was “firmly committed to the safety and welfare of all those in its custody,” and that despite detainees claims of their demands not being met, “no action was taken against anyone due to their hunger strike.”

While the detainees have courted controversy back home, the publicity has helped their plight in a different way. As news of the protests spread, new organizing networks have formed: “all the people know my number now and call me,” Fouzai says. The El Paso action was the first time DRUM had tried coordinating such a direct action by phone. In the past, she says, “I organized the community, I organized the members. But when you’ve never seen someone, don’t talk with somebody physically… [if you can speak only] by phone, how can you organize? I didn’t know how could I do this? But it’s really, really [an] amazing story.… I never saw them, I never met them.”

But through their grassroots communications network, the detainees, locked in an opaque legal no man’s land, made their claims visible around the world.