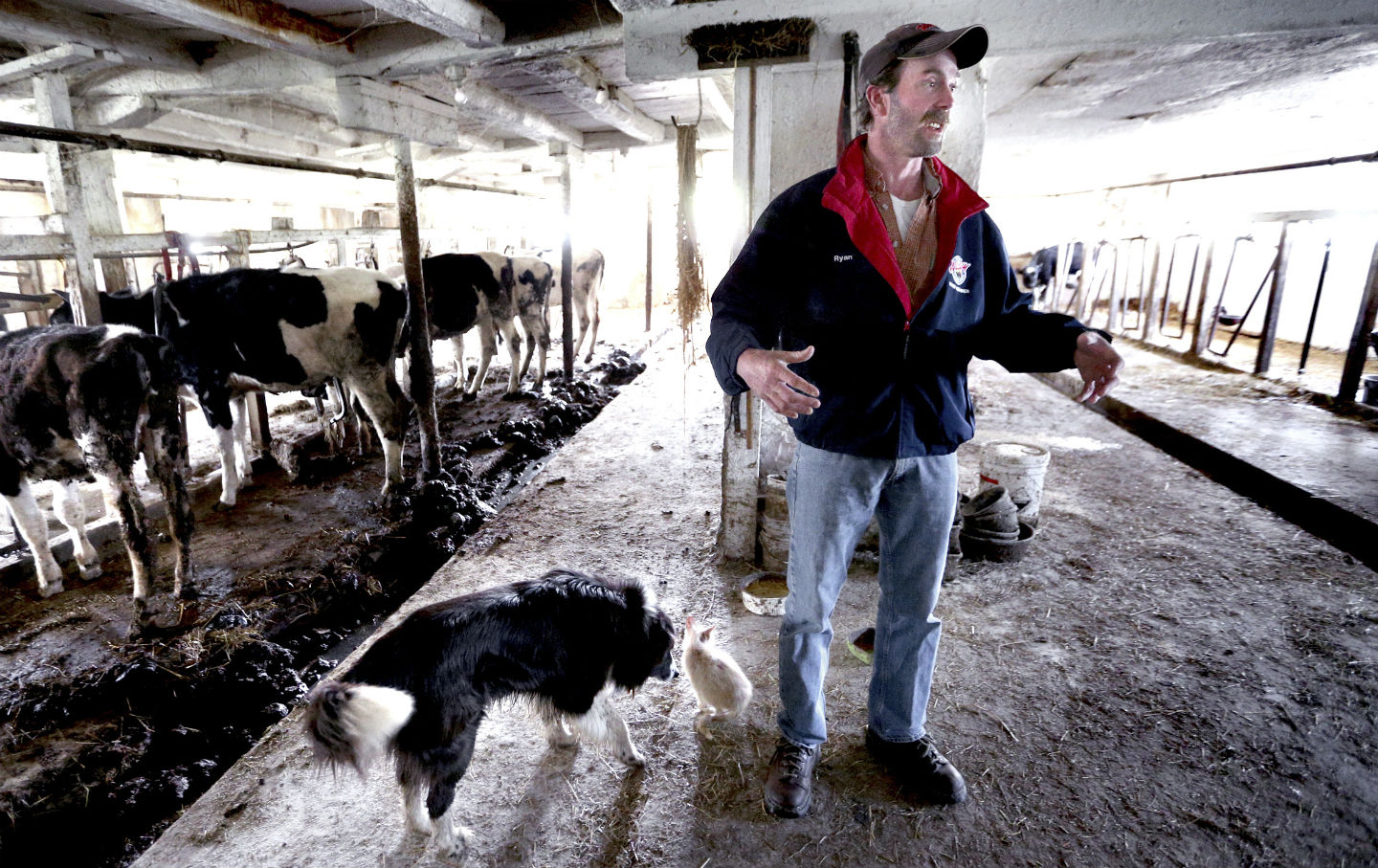 Ryan Dunham, a farmer in rural Westby, Wisconsin, made the hard decision to sell his 50-herd milking heard in April due to the challenging finances he faced from low milk prices. (Peter Thomson / La Crosse Tribune via AP)

Wisconsin Representative and Trump Republican Sean Duffy is quitting his House seat in September, and the upcoming special election will give Democrats a chance to replace him. If they do, the party will send a powerful signal about its political priorities in 2020 and beyond. The good news is that the special election will be held in a rural district, Wisconsin’s 7th, where Democrats can compete. But the result will only be good if they show up, organize, and invest.

Duffy’s sprawling northern Wisconsin district leans Republican but has plenty of blue voters. Donald Trump won easily in 2016, and Mitt Romney took the district in 2012, but Barack Obama won it back in 2008. It’s home to both small-town conservatives and old-school rural progressives who send populist Democrats to the state legislature. Native Americans have deep roots in the region, and there are small but growing Asian American and Latinx communities.

The special election in Wisconsin’s 7th, if it is run right, could provide a road map for Democrats who are organizing far beyond its boundaries. This isn’t just about winning Wisconsin; it’s about winning all the battleground states that went narrowly for Trump in 2016. There are no guarantees of victory in the 7th. The race will be hard. But if the national party fails to make an all-in effort for this special election, that surrender could haunt Democrats heading into November 2020.

“Democrats are fighting for every square inch of Wisconsin—rural, suburban, and urban alike,” says Ben Wikler, the new chairman of the Wisconsin Democratic Party. That’s a good start. To win rural regions of Wisconsin and other states, however, the party has to run smart. Abandoning progressive principles will get Democrats nowhere. Mobilizing progressives who didn’t turn out last time will help. But the key is to get busy at the grassroots, by reaching out to new voters and by building the party back up in communities across Wisconsin where it was winning until recently.

This Vermonter Is Attracting Support From Top Bernie Backers

Only a decade ago, maps of US House seats showed vast swaths of blue in the rural regions of Michigan, Wisconsin, Minnesota, Illinois, Iowa, South Dakota, and North Dakota. From the 1930s through the 2000s, Democrats secured House seats not just in big cities, college towns, and selected suburbs but also in farm country and the small towns of the Great Lakes states, the Upper and Lower Midwest, and the Great Plains. Long after “the solid South” began to swing from Democrats to Republicans, states along the Canadian border and just south of it continued to elect progressive populist Democrats to the House and Senate.

But today, despite Democrats’ 2018 gains, the congressional map is dramatically redder across the Great Plains and the Upper Midwest than it used to be. From 2010 to 2016, Democrats lost five US Senate seats in North Dakota, South Dakota, Iowa, and Wisconsin. And they’ve kept losing Northern-tier House seats. Northern Minnesota’s 8th congressional district—a Democratic stronghold dating back to Harry Truman’s presidency, with just one two-year break—flipped Republican in 2018.

That’s the bad news. But there’s good news: Many of these districts have maintained solid bases of Democratic voters, electing Democrats to local offices and legislative seats, and voting Democratic in presidential races as recently as 2008 and 2012. In some cases, these districts offer riper prospects than the suburban districts where the party devotes so much of its time, energy, and resources. So how do Democrats reverse what can only be described as a losing streak in rural America? They have to run campaigns that speak to the distinct character of the rural and small-town districts of Northern-tier states and stay away from cookie-cutter Washington programs and strategies.

There was a farm crisis before President Trump started his trade war, and the party needs to begin there. Wisconsin lost almost 700 dairy farms in 2018, a rate of nearly two a day. Now, as the president’s ill-thought-out policies make things steadily worse, anger is rising. That anger has, in past elections, created an opening for Democrats, and it could again in the 2019 special election to replace Duffy and in 2020.

But Democrats need to offer more than criticism of Trump and “feel your pain” platitudes. They must talk about the real economics of rural America—recognizing that farm policy is vital, but that it’s also necessary to renew small manufacturing, small business, and infrastructure. And Democrats must make it clear that they will keep rural schools and post offices open because, when they leave, small towns begin to waste away.

There’s a hopeful sign in the fact that at least some Democratic presidential candidates “get” rural. Elizabeth Warren’s New Deal–style commitment to building out broadband is terrific. Bernie Sanders is great on keeping small farmers on their land—and getting a new generation of farmers started. However, while individual candidates are solid, the party is not. Its 2016 Democratic platform barely mentioned rural concerns, and the party’s messaging even now is agonizingly vapid.

But that does not have to be the case. Democrats could get it right. They can borrow from the detailed plans of Sanders and Warren—and invite Sanders, Warren and other progressive contenders to make campaign swings through the northland. They can listen to rural advocates, especially the National Farmers Union, the National Family Farm Coalition, Native American tribes, and groups that represent the burgeoning Latinx population—such as Wisconsin’s Voces de la Frontera. They can link up with labor organizations that have members in rural areas, like the National Association of Rural Letter Carriers, the National Association of Letter Carriers, and the American Postal Workers Union; the American Federation of Teachers and the National Education Association.

Above all, they must seize every opportunity to win races where they won not so long ago. They can do that by running hard for Duffy’s seat, and by making a commitment to keep running until the map flips blue.