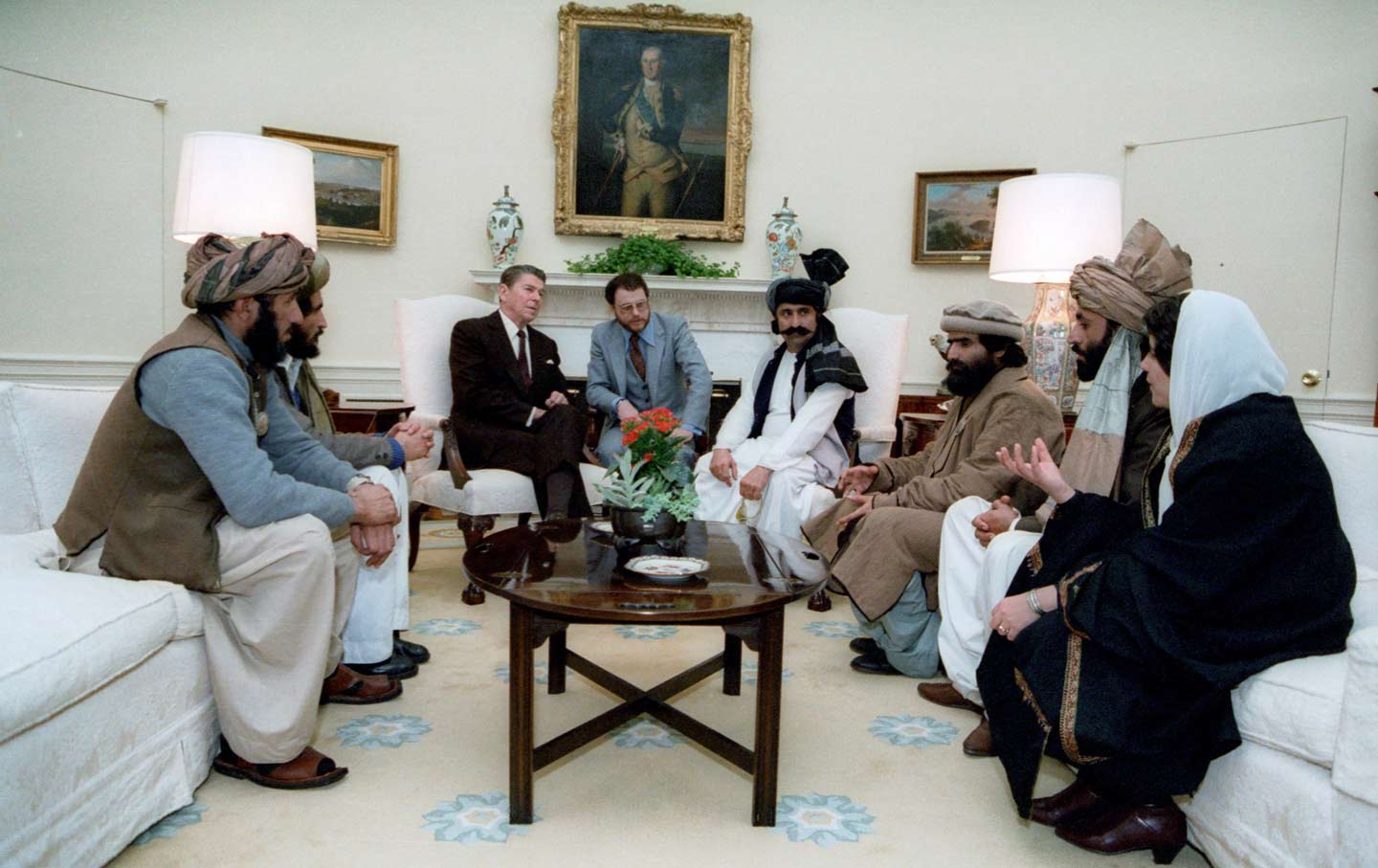 President Reagan meeting with Afghan Mujahideen leaders in the Oval Office in February 1983. (Executive Office of the President of the United States)

Conservatives don’t have a lot of constructive ideas for countering the threat of small groups of non-state actors wreaking havoc with low-tech weapons, as ISIS did in the coordinated terrorist attacks on Paris that killed at least 129 people last week. So they’ve seized on a semantic argument, attacking Democrats for refusing to say that we’re “at war with radical Islam” during last week’s debate.

Writing at the Daily Beast, Ben Domenech argues that failing to use those magic words betrays the left’s “ignorance or inability to grapple with the true nature of today’s foe.” But it’s the conservative analysis that’s dangerously divorced from reality. We’re at war with groups that plot to commit acts of violence against the United States and its allies, not with any particular strain of religious belief. Around the world, millions of Muslims who don’t embrace violence hold beliefs that liberals and moderates would consider to be quite radical. They may well represent a serious social problem, but they pose no threat to our national security.

Israeli defense officials say they have a serious problem with violent settlers in the Occupied Territories, but you won’t hear them claim that “radical Judaism” is the issue. Here at home, security experts warn of the threat posed by violent anti-government extremists. Non-violent anti-government extremists, on the other hand, can be found roaming the halls of Congress. Those who value ballots over bullets are a political problem, not a security threat.

The line between radical and mainstream religious beliefs is a fuzzy one. It ultimately comes down to theological questions that our intelligence agencies and military are uninterested in, and perhaps incapable of answering.

Graham Fuller, former vice-chairman of the CIA’s National Intelligence Council and the author of The Future of Political Islam, writes that, “for fundamentalists, the law is the most essential component of Islam, leading to an overwhelming emphasis on jurisprudence, usually narrowly conceived.” And while social conservatism is central to the fundamentalist worldview, “like other Islamists, [radicals] are also selective in those features of Islam that they seek to emphasize as part of their political agenda where they have one.” Some want to create a caliphate and foment a violent backlash against the West; others do not. We are only at war with the former.

In our discourse, “radical Islam” and “Islamism” are often used interchangeably, but this too is inaccurate. The latter means, roughly, the belief that Islam should be the guiding source of public policy (there’s quite a bit of scholarly debate about its precise meaning). That sounds scary, and in some cases it is. But according to Fuller, “Today one encounters Islamists who may be either radical or moderate, political or apolitical, violent or quietist, traditional or modernist, democratic or authoritarian.” This runs directly counter to the popular view that all Islamists preach global conquest, a belief that’s central to the right’s “clash of civilizations” analysis.

Our intelligence agencies and military are tasked with defending us from real-world threats. In an interview conducted last year, Thomas Hegghammer, director of the Norwegian Defence Research Establishment, which provides analysis to Norway’s security services, said that even among violent Islamic groups, the United States has an unspoken but widely understood strategy to deter terrorism by prioritizing groups that pose the greatest threat. He explained that in practical terms, it’s just not possible to wage a war on “radical Islam,” even if we were to limit it to those who preach violence. “You just cannot fight all the groups at the same time,” he said. “It’s simply impossible. So to maximize domestic security at minimum cost, the US has sent a message to jihadi groups around the world that if you come here, if you attack the homeland, then we will come after you.”

According to Hegghammer, that’s also true of groups that target our Western allies. “That’s why the heaviest repression has been in Afghanistan and Pakistan, where Al Qaeda Central is based, and in Yemen, where Al Qaeda on the Arabian Peninsula is based. These are the groups that have systematically tried to attack the West.”

Conservatives like Domenech also ignore the fact that, for better or worse—and many liberals would argue it’s for the worse—the United States has long allied itself with radical Islamist groups that our defense establishment sees as aligned with our interests, and we continue to do so. Ronald Reagan called the Afghani mujahideen “freedom fighters” when they were attacking Soviet troops in the 1980s. In April, US-backed Syrian rebels fought side-by-side with radical Islamic groups against forces loyal to Bashar al-Assad while capturing the town of Jisr al Shughur, in northwest Syria. And on Monday, the government approved the sale of $1.3 billion in weapons to Saudi Arabia, which is a hotbed of radical Islamic teaching. Analysts blame the country’s support for violent radical groups for attacks on the West, but its government is nonetheless considered a stalwart US ally. It only goes to show that the real world is far too complex to wage a “war on radical Islam.”

To his credit, George W. Bush understood that not all radical Muslims were “against us,” and, more importantly, allies throughout the Islamic world—regardless of their particular theological perspective—were a vital necessity to countering terrorism against the West. That’s why he said repeatedly that we were at “war against evil people who conduct crimes against innocent people.” Bush saw it as a war based on actions, not beliefs. It was one of the few things he got right. And it’s one place where Democrats are absolutely right to follow his lead.