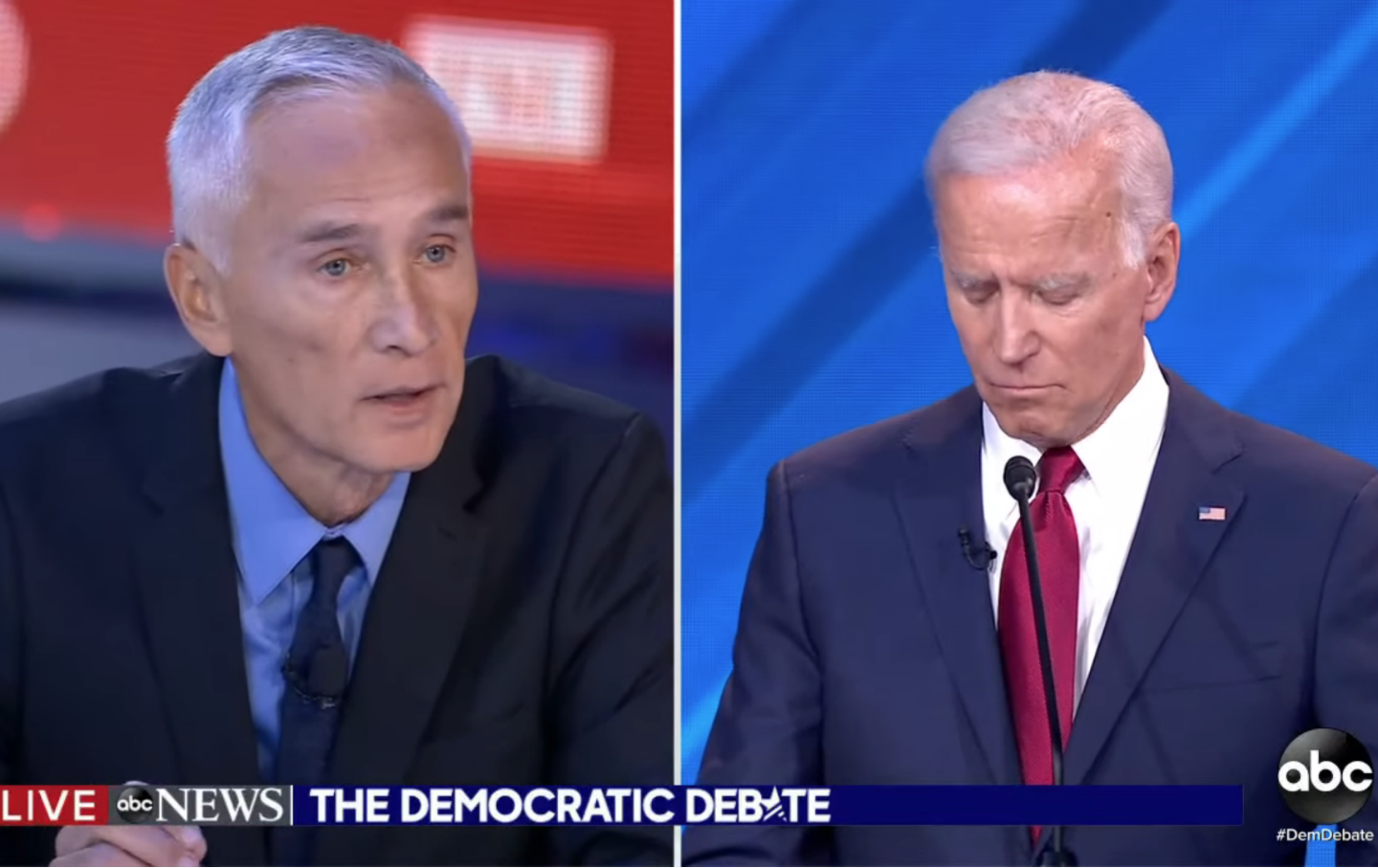 Jorge Ramos delivered a master class in how to make a presidential debate meaningful as the Democratic contenders clashed in Houston Thursday night. The Univision anchor asked tough questions and got unexpected, revealing, and instructive answers from presidential candidates whom he pushed beyond their comfort zones with savvy inquiries about fires in the Amazon, veganism, and socialism.

For the candidates who were up to the task, the exchanges were exhilarating—and empowering.

That was certainly the case when Ramos opened a line of questioning about Latin America—a topic that he noted had not been touched on in previous debates—with a challenge to Vermont Senator Bernie Sanders: “You admit that Venezuela does not have free elections, but still you refuse to call Nicolas Maduro a dictator—a dictator. Can you explain why? And what are the main differences between your kind of socialism and the one being imposed in Venezuela, Cuba, and Nicaragua?”

Sanders made quick work of the first part of the question: “Anybody who does what Maduro does is a vicious tyrant. What we need now is international and regional cooperation for free elections in Venezuela so that the people of that country can make—can create their own future.” Then, he seized the opening Ramos had given him to explain his ideology:

I believe that the United States should not be the only major country on earth not to provide paid family and medical leave.

I believe that every worker in this country deserves a living wage and that we expand the trade union movement.

I happen to believe also that what, to me, democratic socialism means, is we deal with an issue we do not discuss enough, Jorge—it’s not in the media and not in Congress. You’ve got three people in America owning more wealth than the bottom half of this country. You’ve got a handful of billionaires controlling what goes on in Wall Street, the insurance companies, and in the media.

Maybe, just maybe, what we should be doing is creating an economy that works for all of us, not 1 percent. That’s my understanding of democratic socialism.

The Politics of Veganism

Ramos then turned to New Jersey Senator Cory Booker with one of the most distinctive questions asked so far in the 2020 debate season: “After the recent fires in the Amazon, some experts suggested that eating less meat is one way to help the environment. You are a vegan since 2014. That’s obviously a personal choice, but President Trump and Brazil’s President Bolsonaro are concerned that climate change regulations could affect economic growth. So should more Americans, including those here in Texas, and in Iowa, follow your diet?”

That drew laughs. Booker got even more laughs when he said, “First of all, I want to say no. Actually, I want to translate that into Spanish: No.”

Then the senator showed his political skills, turning his answer into a reflection on farm issues—a focus of his campaign, especially in Iowa—that was informed and effective. “Let’s just be clear,” said Booker. “The factory farming going on that’s assaulting this corporate consolidation of the agricultural industry, one of the reasons why I have a bill to put a moratorium on this kind of corporate consolidation is because this factory farming is destroying and hurting our environment. And you see independent family farmers being pushed out of business because of the kind of incentives we are giving that don’t line up with our values. That’s what I’m calling for.”

Ramos had, again, asked a challenging question. And, again, an able contender had seized the opening and used it to their own advantage.

Opening Up the Immigration Conversation

Ramos was at his strongest on the issue of immigration, where he led a number of the candidates—including Senators Elizabeth Warren and Kamala Harris—through discussions that allowed them to highlight their knowledge and their passion regarding the need to end the Trump administration’s abuses. Warren, who had another strong debate night, declared that “a system right now that cannot tell the difference in the threat posed by a terrorist, a criminal, and a 12-year-old girl is not a system that is keeping us safer, and it is not serving our values.”

Ramos added nuance and perspective to his questions on the immigration issue, especially when he questioned former vice president Joe Biden, the front-runner in the race.

“We’ve been hearing a lot about what’s been happening here in Texas. Only a few weeks ago, the deadliest massacre of Latinos in modern US history happened in this state, in El Paso. So the fear among Latinos—and you know this—is very real,” said the moderator. He continued:

So let me start with an issue that is causing a lot of division in this country: immigration. Vice President Biden, as a presidential candidate, in 2008, you supported the border wall, saying, “Unlike most Democrats, I voted for 700 miles of fence.” This is what you said. Then you served as vice president in an administration that deported 3 million people, the most ever in US history. Did you do anything to prevent those deportations? I mean, you’ve been asked this question before and refused to answer, so let me try once again. Are you prepared to say tonight that you and President Obama made a mistake about deportations? Why should Latinos trust you?

Biden replied as he did through much of the evening with a slurry of notions in search of an answer. “What Latinos should look at is—comparing this president to the president we have is outrageous, number one,” he sputtered.

We didn’t lock people up in cages. We didn’t separate families. We didn’t do all of those things, number one. Number two—number two, by the time—this is a president who came along with the DACA program. No one had ever done that before. This is the president that sent legislation to the desk saying he wants to find a pathway for the 11 million undocumented in the United States of America. This is a president who’s done a great deal. So I’m proud to have served with him…

He concluded by noting that “the 25th anniversary of the Violence Against Women Act is up.”

“Yeah,” replied Ramos, “but you didn’t answer the question.”

“Well,” said Biden, “I did answer the question.”

“No,” replied Ramos, “did you make a mistake with those deportations?”

Biden went back to talking about President Obama. “The president did the best thing that was able to be done at the time,” he said.

“How about you?” asked Ramos.

“I’m the vice president of the United States,” answered Biden, which was no answer at all.

Ramos had had enough. “Secretary Castro,” he said, “would you want to respond to Vice President Biden?”

“Jorge, thank you very much for that question,” said an obviously delighted Julián Castro. “And, look, I agree that Barack Obama was very different from Donald Trump. Donald Trump has a dark heart when it comes to immigrants. He built his whole political career so far on scapegoating and fear-mongering and otherizing migrants, and that’s very different from Barack Obama.”

But, after one of the most telling exchanges so far in the 2020 Democratic debates, the viewers had a dramatically better perspective on the front-runner in the race, and on a supposedly “second-tier” challenger who had just displayed first-tier political skills. And on the way in which a skilled moderator can make a debate come alive.

Journalists could [take] notes from @jorgeramosnews in the #DemDebate. He is asking tough, but fair questions—not to stir drama or seek a gotcha moment—but to hold people accountable to their records and have them answer for it. His clarity makes it thrilling nonetheless.