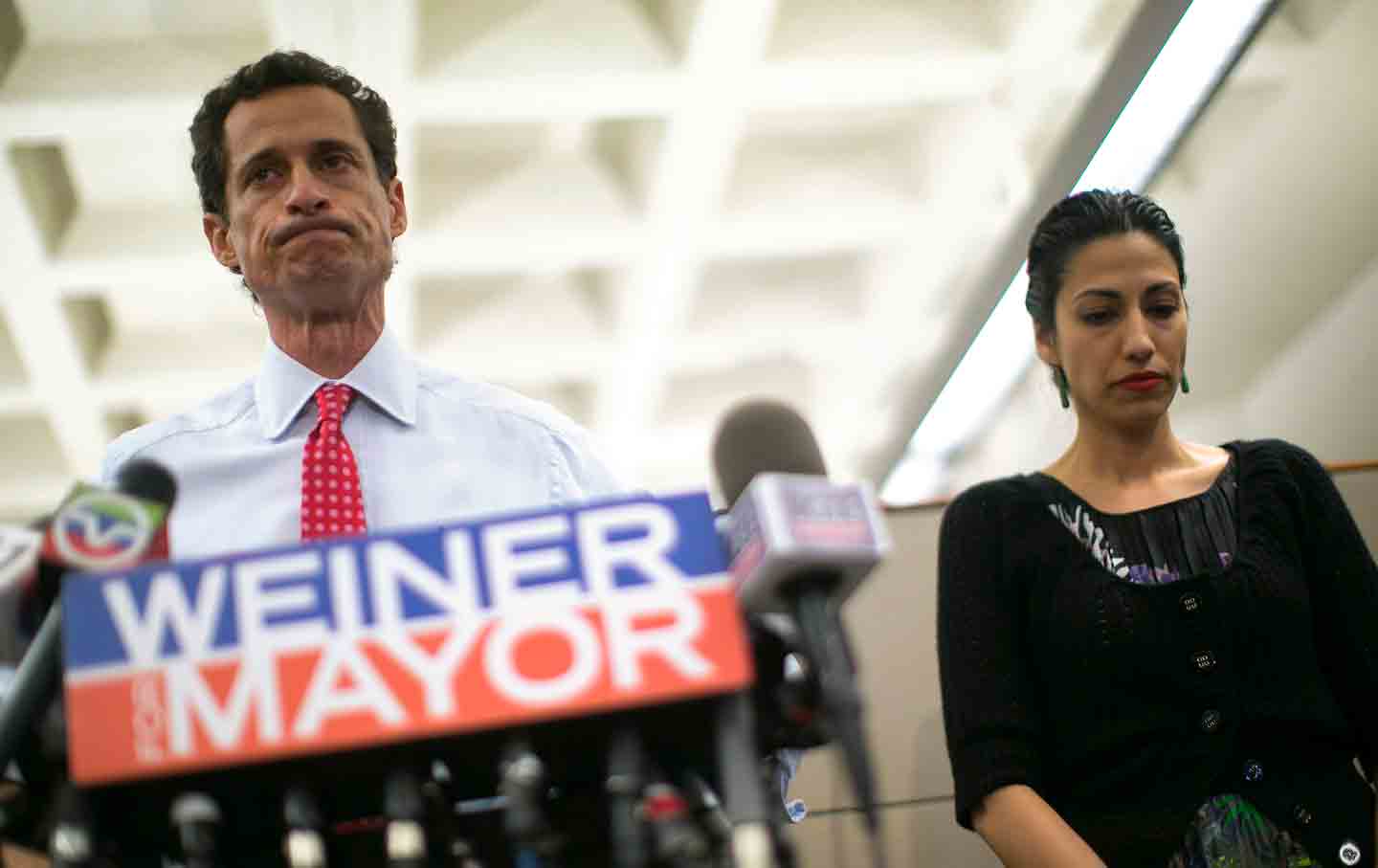 As a congressman, Anthony Weiner was a spectacularly ineffective buffoon. A recent New York Times review of his tenure in the House paints a devastating portrait: Weiner was megalomaniacal, narcissistic, bad at navigating the political ropes, alienating to potential allies, alarmingly disinterested in making actual change and really, really mean to his staff (one former aide likened him to Miranda Priestly in The Devil Wears Prada). In his twelve-plus years in Congress, the Times notes, Weiner “sponsored and wrote only one bill that he steered to enactment: a measure pushed by a family friend who gave his campaigns tens of thousands of dollars in donations.” When Democrats controlled Congress in 2007–08, Weiner introduced fifty bills but didn’t get so much as a cosponsor on thirty-nine of them. According to a former staffer quoted by the Times, “He just never tried…. The point was to be able to say he introduced a bill.” Yes, Weiner squawked loudly about single-payer healthcare, but his interest in it always smacked of grandstanding opportunism. When the ACA finally came up for a vote, Weiner threatened to hold it up in committee unless he could introduce a single-payer amendment—a noble cause, which he bartered away not for any policy concessions but for a primetime speaking slot and a letter of recommendation from Nancy Pelosi.

And that’s just his record on domestic issues. When it comes to foreign policy, Weiner can give Liz Cheney a run for her money. He was one of eighty-two Democrats who voted for the Iraq War, and he continued to support its funding long after its flimsy rationale had evaporated. But it’s on the subject of Israel/Palestine that Weiner truly distinguishes himself. At least twice in public, he has insisted that the West Bank is not occupied, denying a fact that even right-wing former Israeli Prime Minister and settler movement architect Ariel Sharon admitted a decade ago (for a complete account and video of Weiner’s statements, see Ali Gharib’s report for The Daily Beast). He has also claimed that there is no Israeli military presence in the West Bank, which would be news to the IDF soldiers stationed there. As Stephen Zunes points out, Weiner’s denial fits squarely in a disturbing pattern of squelching criticism of the Israeli state and of making patently untrue statements to do so, including claiming that the United States recognizes the PLO as a “terrorist organization” twenty years after it ceased using that designation. These statements reveal Weiner to be a knowing liar or a willfully ignorant ideologue, either of which should disqualify him from holding public office.

Now let’s turn to Carlos Danger, Weiner’s online pseudonym and alter-id. Carlos Danger sexts—a lot. He is overly fond of his penis. He takes pictures of it and sends them to strange women he has never met. He has banal sexual fantasies that involve high heels, pulling hair, holding down wrists and a lot of wetness all around. He does not, apparently, understand the Internet very well, even though he spends a lot of time on it and even though the hackneyed conventions of Internet porn appear to be his Kama Sutra. His prolific sexting took place before, during and after his wife’s pregnancy. He was caught doing it, denied it, admitted it, promised not do it again, did it again and admitted it—again. All of this makes him stupid, boorish, adolescent and deceitful about sex, but no more so than the millions of men (and some women) who do the same thing. It might also make him a bad husband, but only his wife Huma Abedin can be the judge of that, and it is really none of our business what she thinks, what arrangement they do or do not have and whether or not she should leave him. Nothing Carlos Danger did was illegal or coercive, and, it should be pointed out, none of it actually involved physical contact. His behavior and his marriage are entirely unworthy of public concern.

Unless, of course, Carlos Danger has the bad luck to also be Anthony Weiner, politician and candidate, in which case his lies about sex are a sign of a more intrinsic untrustworthiness, his indiscretions a sign of fundamental bad judgment and his repeated transgressions the source of an irretrievably broken public trust. On one level, this is all true. And of course, Weiner himself courted this public condemnation—not by the original sin of sexting but by having the balls to trot out his bogus rehabilitation as something that qualifies him to be mayor of New York.

But let’s just run a counterfactual. What if Anthony Weiner had never denied sexting, had never lied about it and had never promised to stop doing it? What if he had simply asserted that what he does with his penis and cellphone are between him, his wife and his online companions? No American politician has really had the courage to make such a forthright sexual declaration, and so we don’t know the answer to a question that will only become more pressing with time: should the mere existence of an X-rated selfie disqualify one from public office? I suspect it would, because American culture still has a vicious puritanical streak, because we confuse sexlessness and monogamy with public virtue and dignity, because we don’t really have any idea what privacy means. So yes, of course Anthony Weiner lied about Carlos Danger—of course he did. The script had already been written, and underneath the bad calls and broken promises that make up this farce of a morality play there is another lesson: if you have sex outside the box, don’t even think about public service.

Yes, Anthony Weiner is a weasel, a liar, a moron and a ridiculous egomaniac. Yes, he is unfit to hold public office. It doesn’t take a picture of his junk to prove that.