A candidate most people have never heard of, in a state few people pay attention to, could help lead the way in changing the political trajectory of this country. David Garcia’s gubernatorial bid in Arizona offers a roadmap for rebuilding progressive power, a vehicle for galvanizing voters to flip Republican-held congressional seats this year and the White House in 2020, and the opportunity to bury the poisonous policies of a president who is callously crushing the moral foundation of our nation.

At a time when the president of the United States of America is ripping Mexican immigrant children from the arms of their parents and putting them in cages along the southern border, progressives can elect a Mexican-American father as the governor of a border state and send a powerful message about who we are as a nation and what we stand for as a people.

Since the 2016 election, much progressive attention has focused on the Midwestern states that Trump won and the white, working-class voters who overwhelmingly backed his candidacy (although it bears repeating that Trump did not win because large numbers of Democratic voters defected. The progressive vote splintered, and many progressives stayed home, allowing him to win the Electoral College). Many millions of dollars and untold hours of labor have already been invested in Michigan, Wisconsin, Ohio, and Pennsylvania. Progressives such as Bernie Sanders and Elizabeth Warren tout economic populism as the elixir to attract white working-class support. Other, more moderate Democrats such as Joe Biden and Congressman Tim Ryan emphasize the importance of “listening” and feeling the pain of aggrieved and resentful white, Midwestern voters.

Democrats Can Break the “Midterm Curse”

Democrats should never have lost those states. And they must put in place the infrastructure to rebuild that blue wall that held for Obama and other Democratic presidential nominees in the past. But it is equally important to seize upon new opportunities to increase our chances of winning—not just now but into the future.

What Census and electoral data tells us is that the most promising regions in our country for future Democratic wins are in the South and Southwest, where the multiracial ranks of Democratic voters are growing faster than in any other part of the country. Last month, Georgia offered a powerful testimonial to the political possibilities of an unapologetically progressive and inspiring multiracial campaign when Stacey Abrams swept to victory in the gubernatorial primary, garnering more votes than any previous Georgia Democratic nominee in decades (more even than some guy named Jimmy Carter). The demographic and electoral trends in Arizona have created similar conditions for Garcia.

Often overlooked in 2016 election postmortems is the fact that Arizona was one of the most closely contested states in the country. Clinton lost by just 3.5 percent—coming closer than she did in Ohio, Iowa, and North Carolina, states that slid from the Democratic column after Obama had previously won them. Trump won by just 91,000 votes in Arizona, a state in which 600,000 Latinos who were eligible to vote didn’t cast ballots. 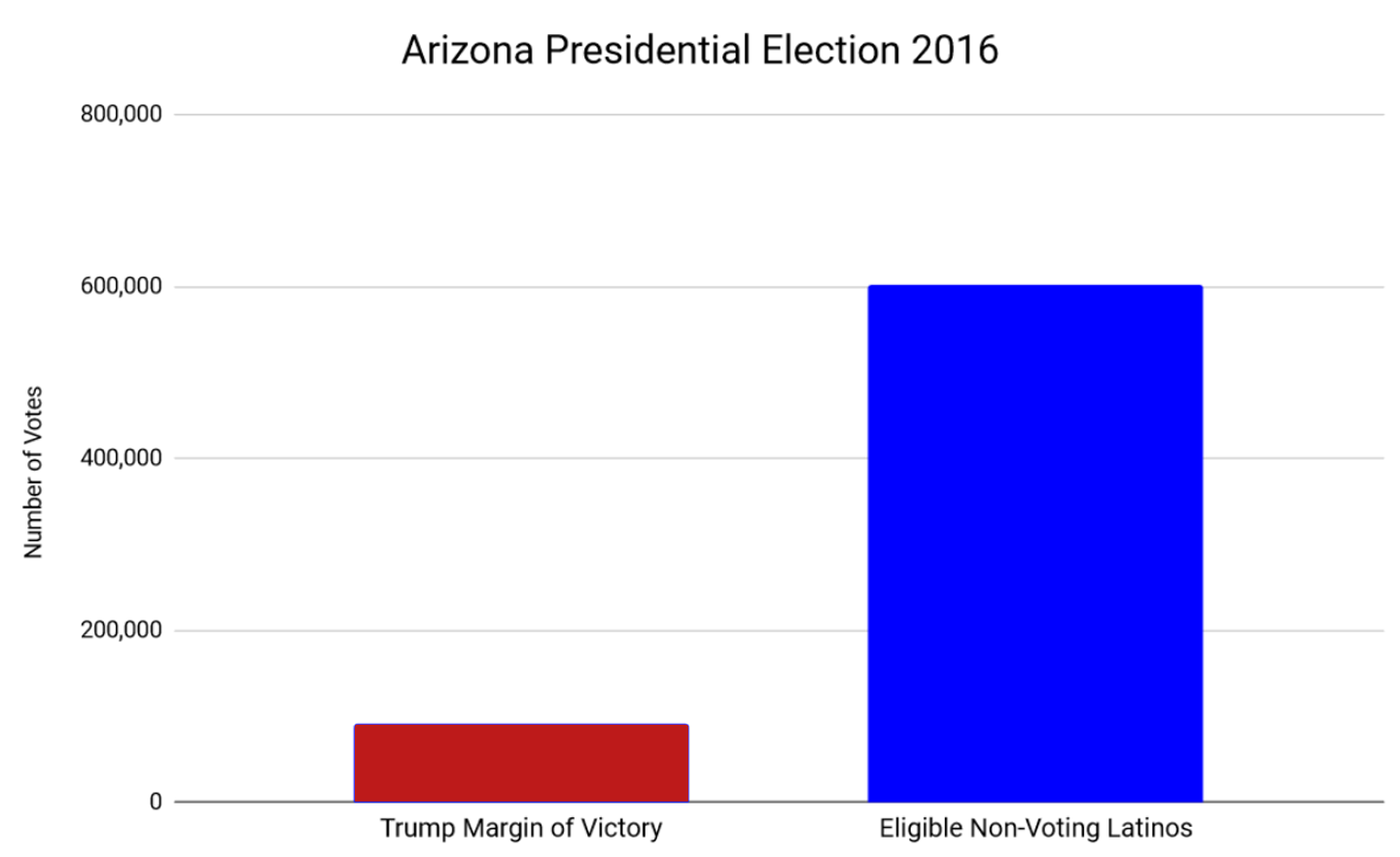 With Garcia, a Mexican American who comes from and resonates with the Latino community, at the head of the ticket, the potential to bring more Latinos to the polls is immense. His campaign itself will be matched by the organizational muscle of networks like One Arizona, which registered 150,000 Latino voters in six weeks in 2016. That kind of support, combined with appealing statewide nominees at the top of the ticket, are the prescription for victory in Arizona this year, in the 2020 presidential election, and beyond.

To prevail in Arizona and other states, it is critical to resist the siren song of an outdated strategy that pushes candidates to moderate their politics in an effort to woo voters. While the greatest upside for all Democrats in Arizona this year is the chance to vastly expand the number of Latinos turning out to vote, the 2018 ticket could actually win just by mobilizing a high percentage of those Democrats who voted against Trump in 2016. Clinton earned 1.1 million votes, more than the number of votes received by the Republican nominee in every statewide race over the past decade.

The way to inspire these voters again is to speak to the same sentiments that led them to oppose Trump before he seized state power sufficient to devastate lives. Some have suggested that Congresswoman Kyrsten Sinema, who is running for the Senate seat held by Republican Jeff Flake, should be the focus of a statewide strategy to turn out moderates for the Democratic ticket. But that would be a mistake. The way to win seats in Arizona—for the Senate, House and other races—is to inspire core Democrats, Latinos in particular. And the way to do that is by lifting up David Garcia’s campaign and unleashing a brown wave of voters that will lift all boats and turn that formerly red state blue.

The math of the matter shows that Garcia’s candidacy and the Arizona Latino population have the power to determine the electoral outcome, but there is also a deeper significance to the Arizona election in 2018. We are engaged in an epochal battle for control of this country, its identity and values. The foundation of Trump’s candidacy and presidency is hostility to immigrants in general and Latinos in particular. He has rooted his politics of racial resentment in Arizona, returning there repeatedly during the campaign, announcing his most vile plans there, and issuing a presidential pardon to the anti-immigrant, convicted-felon former sheriff Joe Arpaio. Electing David Garcia—a person who comes from the very community Trump demonizes and who is unapologetically committed to building an inclusive, multiracial democracy—will represent a resounding rejection of the nativist, nationalist, and racist impulses lifted up by this president.

Garcia’s bid in Arizona shares the same potential and promise as Abrams’s in Georgia. The underlying alignment with the demographic revolution in those respective regions shows that we could be just six short months from this country’s having a Governor Abrams in Georgia (and thus our nation’s first black female governor) and a Governor Garcia in Arizona serving as the cornerstone of a new multiracial progressive political order in America—one that will be well positioned to flip those critical states with 27 combined electoral votes, help the 2020 Democratic nominee win the White House, and restore the foundation values that most Americans hold dear.