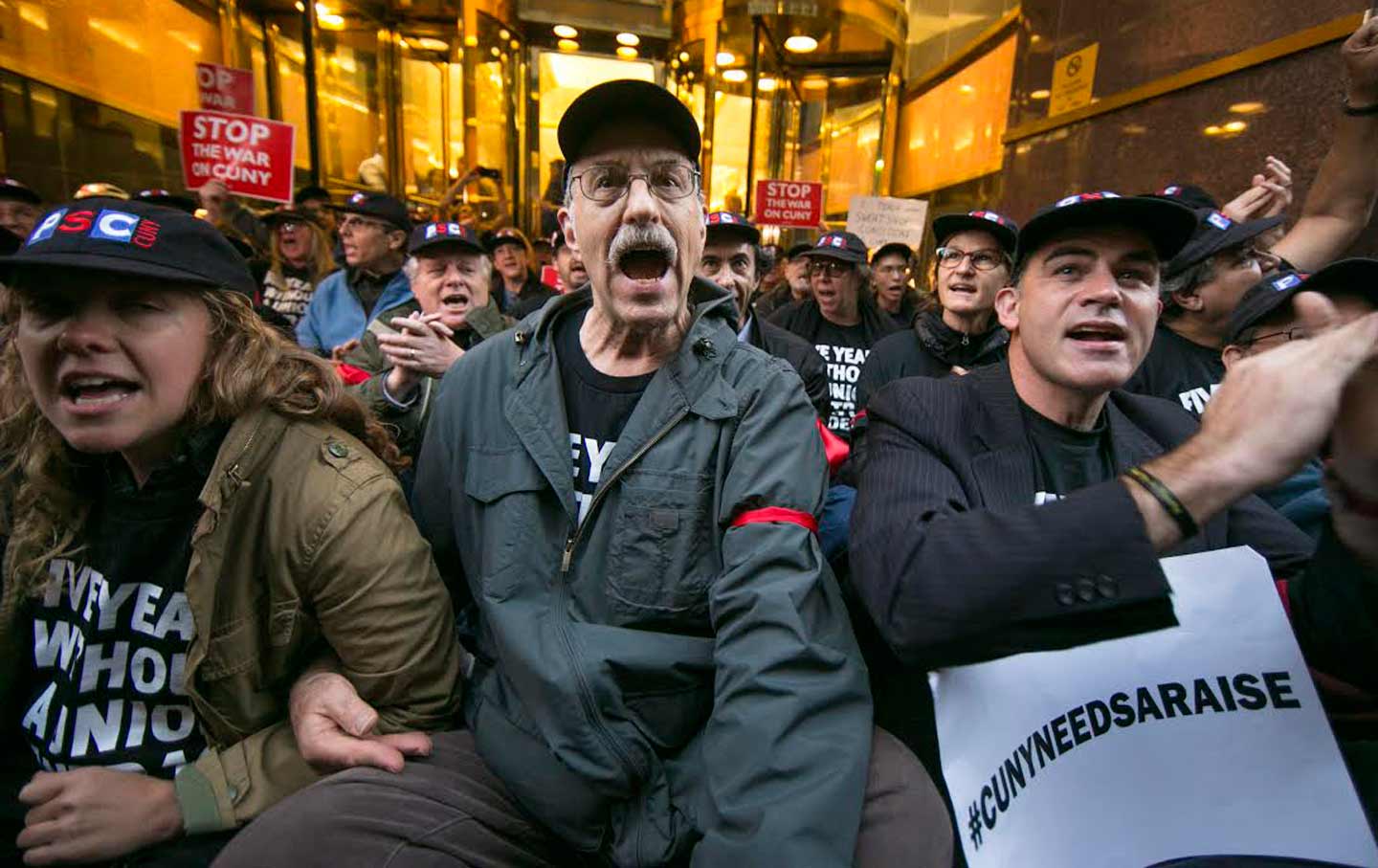 Members of the Professional Staff Congress block the entrance to the building that houses the offices of CUNY administrators, November 4, 2015. (Dave Sanders)

The Professional Staff Congress—the labor union that represents more than 25,000 faculty and staff across the City University of New York’s 24 campuses—has had a busy November. In the course of three weeks, the union has organized a coordinated act of civil disobedience, taken the first step towards calling for a strike, and helped deliver more than 40,000 postcards to Governor Andrew Cuomo’s office.

And for good reason: Members of the PSC have worked without a contract for five years and have gone without a pay raise for six. Meanwhile, Governor Cuomo has consistently divested state funds from the University, forcing students to foot an increasing share of costs like utility bills and rent.

Now, with the support of students and labor unions across the country, the PSC is trying to take matters into its own hands.

The first of the month’s three events came on November 4, when hundreds of PSC members and supporters protested for salary increases outside of the midtown Manhattan building that houses the offices of CUNY administrators. There, 53 faculty and staff members locked arms and refused to move until CUNY presented an “acceptable offer.” (During the protest, CUNY made an offer for a six-year contract, beginning in 2010, with salary raises totaling six percent by October 2016. The PSC swiftly rejected the proposal, claiming that, since the raise would be below the level of inflation, it would effectively be “a salary cut.”) Several hours later, all 53 participants in the sit-in were arrested.

According to the university, the proposal reflected “its current fiscal condition and its ability to fund a new contract.” A significant reason for these financial constraints: Since 2008, state funds for CUNY and the State University of New York have been cut by $1.5 billion. To make up for these cuts, in 2011, Governor Cuomo instituted a $300 yearly increase in tuition for both CUNY and SUNY students. This new revenue was meant to provide better educational resources for students, faculty, and staff. However, according to Barbara Bowen, president of the PSC, that hasn’t been the case. “The 2011 tuition increases were sold to the legislature as a way to enhance resources at CUNY and SUNY, but they’ve only been used to fill the gap left behind by the governor’s chronic underfunding for public higher education,” she told The Nation.

That is why on November 20, the PSC, along with the CUNY University Student Senate and the New York Public Interest Research Group, delivered 40,000 postcards to Cuomo’s office demanding that the governor sign the Maintenance of Effort bill—legislation passed with overwhelming bipartisan support in both the state senate and assembly that would require the state to cover inflationary and mandated costs at both university systems.

For Bowen, Cuomo’s progressive credentials are nowhere to be found when it comes to CUNY.

Cuomo “has been anything but progressive when it comes to funding for CUNY,” she says. “More than half of our students have family incomes less than $30,000. The majority of our students come from working class backgrounds, and 75 percent of CUNY undergrads are people of color. You cannot be a progressive and deny resources to people who seek college education. These are the children of minimum wage earners… Since coming into office, we have seen a pattern of disinvestment in an institution that is at the heart of any progressive cause in this city.”

With CUNY administrators presenting inadequate contract offers and a Governor who continues to play sideline politics, the PSC is now, quite literally, fighting for the livelihood of its members: According to The Economist, “the cost of living in New York has risen by about 23 percent over the past five years.” Meanwhile, the nearly 12,000 adjunct professors at CUNY—who now teach a majority of classes at the university system—earn only $3,000 per course.

Largely out of desperation, the PSC has taken a step to towards using labor’s strongest weapon: a strike.

On November 19, the PSC announced at a mass meeting at Cooper Union’s historic Great Hall that it will soon hold a strike-authorization vote. (Members are not forced to go on strike if the vote is ratified. Instead, the vote, if approved by a majority of union members, authorizes the union’s executive council to call for a strike.) The announcement was received with boisterous applause by the nearly one thousand attendees.

Given that, under the Taylor Law, striking is illegal for public-sector workers in New York, PSC’s move speaks to the union’s determination to obtain a decent contract using any means necessary. “We hope a strike won’t be necessary,” says Bowen. “We will do everything we can to continue negotiating.”

At the mass meeting, union leadership made clear that their struggle is not in any way unique. Across the nation, teacher unions are under attack from hostile state governments and big-money interests seeking to expand charter networks. For Bowen, this just makes victory for the PSC that much more important. “We are in a period of austerity economics,” she says. “The 1 percent has an interest in running public sector work. Schools and colleges are in the forefront of maintaining a good quality of life for low income and middle class people because we offer a chance to fight against inequality…. Our economy is structured to redistribute wealth and opportunity from the masses and concentrate it in the hands of the few; such an economy has no interest in high-quality college education for the poor, and we are fighting against that agenda.”