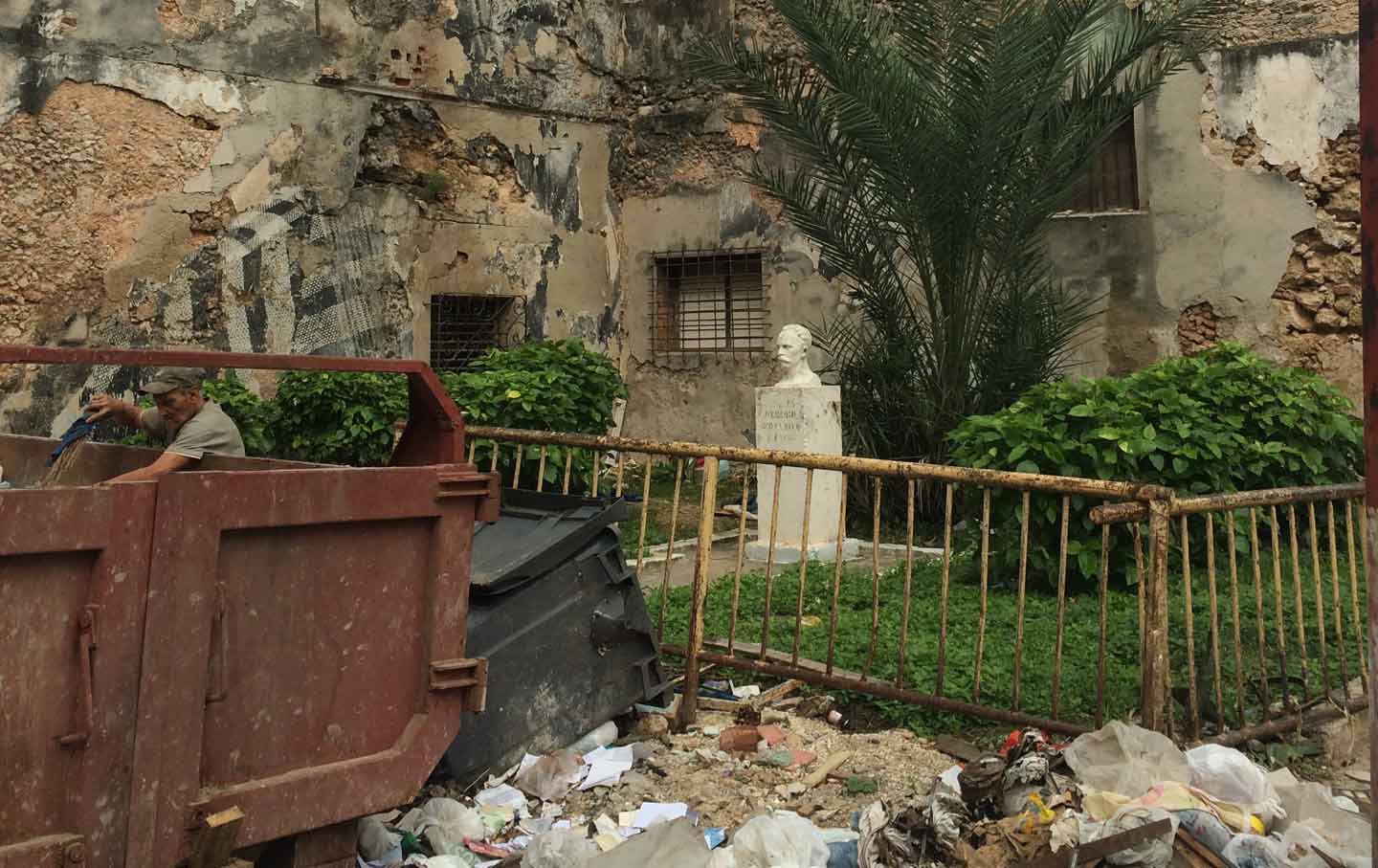 A garden in Los Sitios, one of Havana’s barrios, which was a stop along Silvio Rodríguez’s tour. (Photograph by Sujatha Fernandes)

The urban slums have always been a source of vexation for the Cuban revolution. During the seventies, the revolution attempted to do away with the slum areas of the cities by providing housing, employment, and education to the poorest residents. The 1974 film De Cierta Manera (One Way or Another) by the Afro-Cuban director Sara Gómez shows a wrecking ball breaking up dilapidated shanty homes to make way for new Soviet-designed housing projects built by micro brigades. But after the Soviet Union collapsed and Cuba was forced to turn to tourism and the global market, pockets of marginality began reappearing, populated by rural immigrants to the city, the elderly, and others who could barely survive on depreciating fixed incomes. More than 40 years later, the slums are once again present in the urban landscape.

Between 2010 and 2012, the legendary Cuban folk singer Silvio Rodríguez embarked on a tour of 60 of the poorest barrios in the country. Rodríguez was one of the founders of the nueva canción movement of politically inspired folk music that spread across South America during the 1960s. Prior to the tour, artists with Rodríguez’s stature had been spending more time playing concerts abroad, and Cubans had complained that they hardly got to see local artists. Rodríguez coordinated the local tour, which included other renowned Cuban artists, including pianist Frank Fernández and singers Omara Portuondo and Santiago Feliú. They gathered crowds of hundreds in the plazas and squares of neglected barrios such as Cocosolo, Korea, Pogolotti, and Alamar.

The young documentary filmmaker Alejandro Ramírez decided to follow Rodríguez on his tour, during which the filmmaker spoke at length with the residents of the barrios about their everyday lives. The result is the 2014 film Canción de Barrio—or Song of the Street—one of the first documentaries to take on the troubling reemergence of spatialized poverty in the new Cuba. The film intersperses the lyrical songs of Rodríguez, accompanied by melodious flutes and his rhythmic guitar, with interviews of local residents. The mostly black and mestizo residents document in detail the accumulation of hardships that they face, such as the lack of proper sanitation, routine flooding, collapsing housing, and the unresponsiveness of local authorities. And yet, the characteristic humor of Cubans shines through. One woman points to the damage done to her home during the last hurricane. She shows where her kitchen had collapsed and how her bathroom ceiling fell in. “There it is,” she says, resigned. “I have to bathe under the stars.”

That these are not the favelas of Rio or the villas of Buenos Aires lends an added poignancy to the film: The residents are all too aware of the invisibility of their predicament in a country that has supposedly eliminated class distinctions. In popular parlance these areas are often spoken of as zonas ilegales, or illegal zones, for the lack of legal addresses, but the state still refers to them euphemistically as barrios desfavorecidos, or disadvantaged neighborhoods.

The film, however, also reveals the underlying paternalistic impulse of needing to bring Culture to the barrios. Folk music and Western classical traditions are counterposed to Afro-Cuban religious-cultural practices such as Abakuá, which the film presents pejoratively as linked to a culture of violence and criminality. Culture is understood as Frank Fernández performing Beethoven’s Moonlight Sonata. But the barrios have given birth to their own rich Afro-Cuban musical traditions, from the percussive genre of rumba to the more contemporary hip hop movement. Places on the tour’s map like Parque Trillo, Regla, and Alamar were key sites for the development of rumba and hip hop, a point that seems to be lost in the film.

Undoubtedly, local residents welcome having Cuban artists perform for them. But for some, lofty promises of cultural enrichment are overshadowed by more mundane concerns. “It’s made a difference,” says a young black man in tortoiseshell glasses. “The streets were paved because Silvio was coming.”

The haunting beauty of Silvio’s voice brings to mind all of the nueva canción artists across the hemisphere who were murdered or exiled by US-sponsored military regimes intent to stamp out their visions of socialism and sovereignty. Watching Canción de Barrio, one wonders how different the continent would look today if the alternative social projects of Salvador Allende in Chile, the Sandinistas in Nicaragua, and the FMLN in El Salvador had been given the space to truly develop in alliance with socialist Cuba. And perhaps Cubans who had fought for a revolution to bring them out of poverty would not be forced once again to live in poverty.

One elderly woman in Canción ponders why Cubans have to bulk up their coffee with chicharos, or split peas, when coffee is produced in Cuba. “And me?” she asks, poignantly. “Who am I? What is the point of being Cuban? Why did we fight for this revolution? For what?”

The film is particularly relevant in the light of recent openings between Cuba and the United States, following the restoration of diplomatic relations. Many of the older Cubans that I’ve spoken with expressed concern that the prospect of further foreign investment and tourism that comes with the openings would widen income inequalities and deepen poverty. Such divisions are already apparent with the old colonial mansions in the leafy middle-class suburb of Vedado being bought up and restored by Cubans with access to a higher-valued currency, while the poorer neighborhoods experience further decline. Likewise, as scores of American tourists don headscarves and aviator sunglasses for rides through the center of town in a souped-up Buick or Chevy, Cubans who rely on these cars for transport to barrios like Playa and Cojímar must wait in lines to flag the fewer Cuban peso taxis that still make these runs. Amid the celebratory rhetoric that accompanies so-called normalization, Canción de Barrio tells a darker story about those who are being left out of the promises of liberty and prosperity in a new Cuba.

I recently visited Los Sitios, the site of one of the first concerts on the Rodríguez tour, and I came across a lush garden fenced off by rusting yellow barricades. A mural of an unidentified older man in writerly black glasses, eaten away in large patches by the salty sea air, looms over the oasis. Along the perimeter of the garden, a man scavenged through a brown dumpster, looking for recyclables. At its center, beneath a palm, sat a white bust of the Cuban independence leader José Martí, with an inscription, in Spanish: “The bad is accidental, only the good is eternal.” Silvio’s music has endured. Will the barrios?