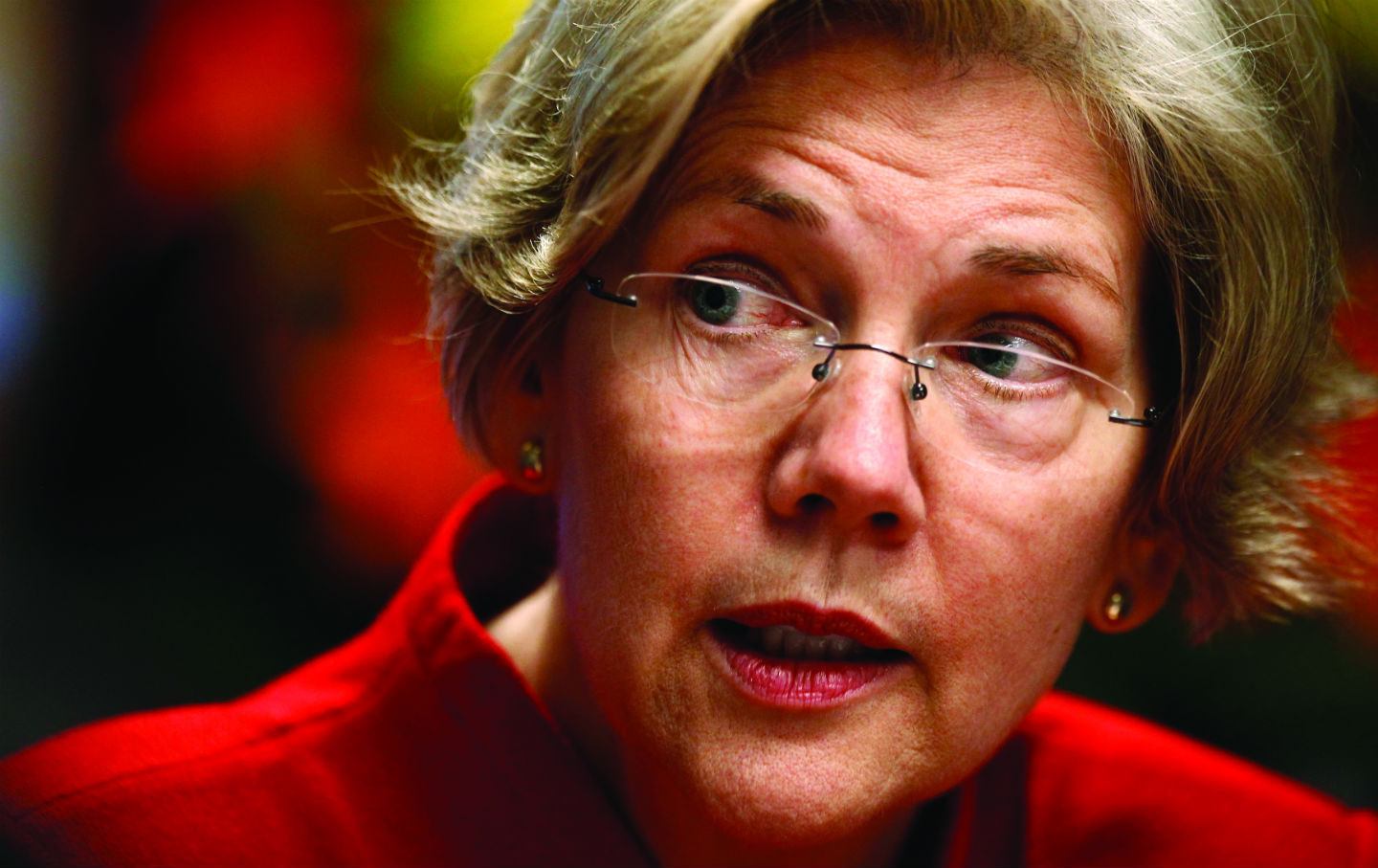 Senator Elizabeth Warren opened up a new battle in the war against the Obama administration’s trade policy last week, when she charged that the fast-track trade authority now being considered by Congress could ultimately allow a Republican president to gut many of the Dodd-Frank financial reforms.

This provoked a heated response from the White House and its allies, who not only disputed Warren’s claim but bizarrely (and under the cover of anonymity) suggested she was just trying to juice up the Draft Warren presidential movement.

So who’s right? This is an important question to litigate, as the Senate prepares to vote on fast-track authority Tuesday.

First, what is fast track?

Presidents generally want to negotiate trade pacts with a promise to other countries that the US Congress won’t later change what they agreed upon, and so they ask Congress to pre-approve Trade Promotion Authority (TPA), colloquially known as a fast track. The fast-track legislation now up for a vote in Congress says that for the next six years, any trade deal proposed by an administration cannot be amended. The deals also cannot be filibustered in the Senate, and would pass with a simple-majority vote.

In exchange for ceding this authority, Congress writes into the fast-track bill all kinds of requirements about what it wants to see in future trade deals: This version of the legislation, worked out between Senators Orrin Hatch and Ron Wyden and Representative Paul Ryan, has a number of guidelines on environmental, labor, and regulatory standards.

Democrats complain that in the case of the Trans-Pacific Partnership, the fast-track guidelines come too late—much of the deal has already been agreed upon. In fact, when I spoke with Representative Sander Levin last week, he said that when he raised concerns recently with the US Trade Representative about TPP’s highly controversial investor-state dispute process, he was told that the TPP chapter on it is already “closed.” (A representative for USTR declined to comment on the record.)

There is also a near-universal belief among congressional Democrats that guidelines in the fast-track bill are far too soft—that they are much more suggestion than requirement. This is of great concern since fast-track authority will almost certainly be in effect for six years, spanning not only the rest of Obama’s term but the first term of the next president, and some of the following president’s term as well, if Obama’s successor is voted out after four years.

It’s that unease Warren is speaking to when she raises concerns about fast track and a Republican president. “[H]e wants us to vote on a six-year, grease-the-skids deal,” she told NPR this week. Congress is making a blind promise of faith here, particularly if you believe—as most Democrats do—that this fast-track bill doesn’t really force the White House to adhere to very much. And beyond TPP, Senator Orrin Hatch said there are 43 different trade bills that could pass in this six-year window.

The final thing to understand about fast-track authority is how unique it is during this era of gridlocked American legislating. Over the past several years, spending on lobbying has actually decreased as Congress routinely fails to agree on much beyond basic funding of the government and naming some post offices. Trade deals contain vast amounts of regulation and economic rulemaking, and fast-track authority is like a magic-carpet ride through the deadlocked Congress.

How specifically could Dodd-Frank be changed?

Warren pointed to the Transatlantic Trade and Investment Partnership (TTIP), a proposed trade deal between the United States and the European Union that’s been under negotiation for several years.

Major financial institutions have been lobbying heavily on this deal—which is not surprising, since the major financial centers in the United States and Europe would be affected. JPMorgan Chase, MasterCard, Citigroup, Wells Fargo, and VISA have all lobbied Congress on fast track and TTIP, along with TPP, in the past six months, according to company disclosure forms.

What might they want? Like with TPP, we don’t know all the details of TTIP yet, but advocates have many fears. One is that the Federal Reserve’s plan to impose separate liquidity requirements on foreign banks might be scotched; Inside US Trade reported in 2013 that the EU wanted to address that rule, which it thinks is “discriminatory.” Liquidity requirements were a crucial part of Dodd-Frank and force banks to have a certain level of assets they can sell off in the event of a crisis. European regulators have traditionally taken a lighter touch on such requirements. That same report suggested that compliance rules on derivatives—another key part of Dodd-Frank—were under negotiation.

Relatedly, there is a fear common to many trade deals: If TTIP is enacted with lower financial regulations than what exist under Dodd-Frank, and with exemptions for foreign banks, American banks could reincorporate in signatory countries to sidestep US regulations.

And it’s not just Dodd-Frank: the leaked EU proposal for TTIP has a provision that new regulations first be “analyzed” to determine if they have an unacceptable impact on trade. Americans for Financial Reform (AFR) worries that this could “impose a presumption that regulations must be judged on the basis of their trade impact rather than their effectiveness as public interest policies promoting financial stability.”

Reported talks on “regulatory cooperation” would mean regulators in different countries have to consult each other on new rules before respective legislative bodies are presented with a reform. AFR has said, “At best, this mechanism would delay implementation of needed financial reforms. At worst, it would result in a watering down or outright blockage of said reforms.”

So why does Obama think Warren is wrong?

I reached out to the US Trade Representative’s office, and was directed to a statement from the Treasury Department that “The Dodd-Frank Act is a signature achievement of the Obama Administration that the President fought long and hard to pass into law. Nothing we’re doing in any of our trade agreements would weaken our ability to implement Wall Street Reform now or in the future.”

I was also guided to a quote from Obama, when he told members of Organizing for American that “every single thing we’ve done—from Obamacare, to Wall Street reform, to student loan reform, to credit card reform, to fighting for a fairer tax code, to higher minimum wages, to a smarter workplace—all it’s focused on making sure it’s a good deal for middle-class families and folks who are working hard to get into the middle class.”

Let’s file that response under “not detailed nor convincing.”

It is true, however, that the Obama administration has drawn a hard line on gutting Dodd-Frank through TTIP; Treasury Secretary Jack Lew said in late 2013 that he opposes including financial services in TTIP because “Normally in a trade agreement, the pressure is to lower standards on things like that and that’s something that we just think is not acceptable.”

That’s comforting, but also a frank admission that TTIP could indeed weaken financial regulations. Warren’s point isn’t that Obama might do it, but that President Scott Walker would decline to take the same hard line against deregulation.

There’s one other rebuttal made by administration allies. Here’s Politico’s Ben White: “The problem, White House and pro-trade officials on the Hill say, is that the fast-track bill currently before Congress includes language that expressly forbids changing U.S. law without congressional action.”

That claim is highly misleading, and has unfortunately been repeated in several other outlets. Trade deals, by their very nature, change US law—that’s the whole point.

Specifically, this happens when Congress passes the implementing legislation of the trade deal. The fast-track legislation makes clear that “if changes in existing laws or new statutory authority are required to implement” a trade deal, then the implementing legislation will include provisions “either repealing or amending existing laws or providing new statutory authority.” When Congress passes a trade deal, it changes US law at the same time, and it should be noted that those changes to the law are inherently also on a fast track.

Therefore the provision cited by the administration—that says trade deals can’t change US law without congressional action—is a total misdirection and one White House officials should be embarrassed to advance. It’s a relevant point, right up until it becomes completely irrelevant.

That provision exists just in case the implementing language doesn’t sufficiently change US law, though it almost surely would. But it still only applies to domestic law, meaning that people couldn’t challenge an American bank in a US federal court for violating a trade deal.

Ben Beachy of Public Citizen pointed out to me, however, that international law still very much applies—and that trade agreement partners could use international tribunals to sanction the United States until it changed its laws to conform to the trade deal it signed onto.

But would President Walker actually do it?

The fairest critiques of Warren’s allegation acknowledge that fast track and future trade deals could indeed weaken Dodd-Frank, but that a Republican president might not choose that route. That came up in some of my conversations with pro-trade officials, and can be found in other media accounts as well.

“[T]he new president would likely just choose to roll back Dodd-Frank directly through changes to U.S. law, with ordinary legislation through the Republican-controlled Congress, assuming the GOP maintains control of both the House and Senate after 2016. No trade deal or fast track would be needed to take that route,” wrote William Mauldin in The Wall Street Journal. Matthew Yglesias made a similar point at Vox, and added that the hypothetical Republican president could also weaken or undermine Dodd-Frank through regulatory discretion.

That’s true enough, but remember that fast track is a much easier glide path for changes than a simple congressional bill to repeal all or part of Dodd-Frank, which would presumably go through the normal committee and amendment process in Congress, and face a 60-vote threshold in the Senate. The only advantage to the congressional route is that it (might) be quicker, if President Walker feels he has the votes, as opposed to concluding TTIP negotiations and waiting for Congress’s 90-day review under fast-track.

President Walker might also choose to weaken financial reform through lax regulation, but that isn’t mutually exclusive to seeking changes through TTIP—particularly because lax enforcement only lasts as long as Walker is in office, whereas the trade deal would be binding in perpetuity.

Moreover, many of the ways TTIP would weaken financial reforms are oblique. Regulatory cooperation and rules that encourage US banks to reincorporate in lesser-regulated countries aren’t labeled with bright-red “REPEAL DODD-FRANK” language. They are also attached to a trade bill, which generally would generate more overall, bipartisan support than a simple measure to repeal Dodd-Frank.

One final point: It’s not just Dodd-Frank. Remember those 43 trade deals Hatch spoke about. Important environmental and labor regulations could be at risk through this same fast-track process as well. Warren is focused on financial reform because it’s her wheelhouse—and if I had one major critique of her comments, it would be not that they are overstated but that they are not broad enough.