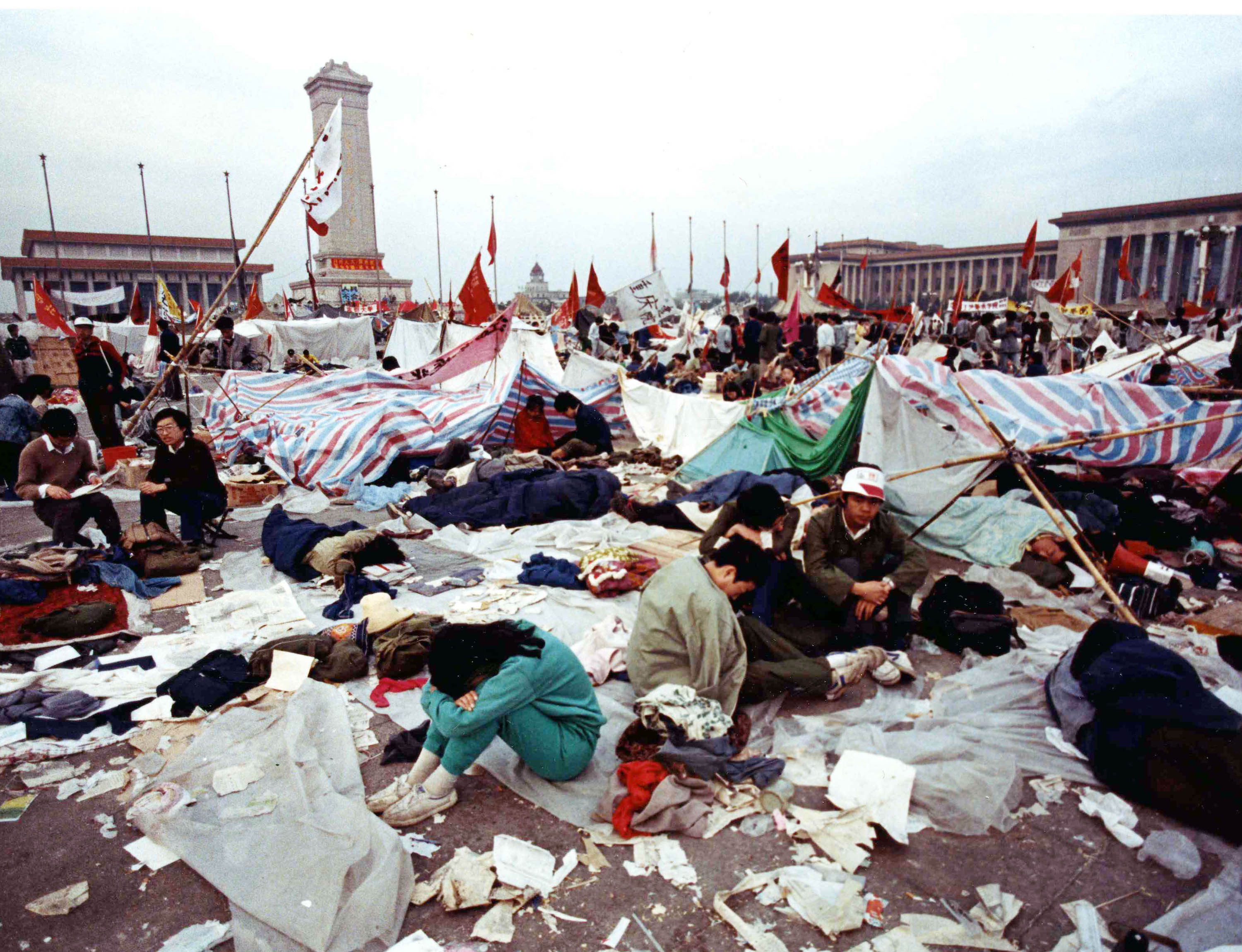 In 1989, the news about protesters being massacred in Tiananmen Square reached my downtown Manhattan neighborhood, and I joined in a public art protest, with community members painting righteously in solidarity. With a grade-schooler’s energy, I splashed a canvas with a blood-red flame erupting over a swath of ocean, flecks of each color jumbled together in a storm of screaming American-flag colors.

With twenty-five years hindsight, it all seems a little childish. The flames of Tiananmen have been stamped out, the scorched square revarnished with over two decades of well-manicured authoritarian capitalism. My protest art was papered over by a cheery Chinese traditional painting in my parents’ apartment.

Looking back, we see that the West’s framing of the “June 4 incident” was selectively narrow. As Steven Hsieh points out, the media lens trained onto idealistic pro-democracy students and overlooked the workers, who apparently suffered some of the heaviest attacks.

The workers’ dissent took on a different tone than the students’. The uprising and crackdown followed a devastating inflation crisis that emerged during China’s first phase of economic “opening.” As salaries remained depressed while price controls were lifted, urban workers reacted to both material deprivation and a sense of betrayal by the regime.

As for the pro-democracy activists, Jeffrey Wasserstrom noted in a 2009 essay, “The students did celebrate the virtues of minzhu (democracy), but they spent even more energy denouncing corruption.” Democracy was a useful rhetorical platform for airing frustration with a rotten regime, but the immediate issue was less ideologically inflected than Americans like to imagine—the dissidents were less concerned about casting ballots or upholding inalienable rights, and more about just having a government that would allow their economy and everyday lives to function.

So the drama of China versus the West playing out in an epic battle on Tiananmen Square is not quite as flat as it seems on the surface. Nor is the narrative of dissent limited geographically or historically to the events on June 4. About a generation into the post-Tiananmen capitalist transition, anxious Chinese youth today, whether university students or migrant workers, have much in common with frustrated young workers across the world: as China throttled into global capitalism, the 1989 uprising marked the first stirring of resistance to the monstrous inequality that neoliberalism had driven (and has since continued to expand). And as structural wealth gaps and social deficits expand worldwide in tandem with economic globalization, the shock of social inequality may be even more resonant today.

So is the uncertainty about the promise of democracy. The dilemma many Chinese face today, though—particularly middle-class urbanites—is that they don’t see democracy as a solution, because, like the regime, they may be frustrated with the powers that be, but they also deeply fear the alternative—the masses seizing power from below. The frustrations of students and workers converged in 1989 on what they saw as the state’s failure to realize the promise of economic reform and deregulation, and by extension, the political oppression associated with social crisis. But after twenty-five years of relative prosperity, when faced with change versus stability, the middle-class in China today are paralyzed by mistrust. As University of Michigan professor Mary Gallagher explained on Marketplace, “When they think about democracy, they think about majority rule. And I think majority rule is scary to them.”

The thing is, the majority will make itself heard regardless. And China’s working class hasn’t disappeared since Tiananmen’s bloodbath; it is diversifying and in some sectors, getting angrier. According to data from the Hong Kong–based NGO China Labour Bulletin, there have been more than 700 labor-related uprisings in the past year, and since 2011, more than 1,500 protests, strikes and other “mass incidents” have ensued, ranging from clashes with management over back wages to road blockages to taxi worker strikes. There are no official independent unions (just a massive state-sponsored All China Confederation of Trade Unions), but workers are growing increasingly savvy at manipulating technology to spread their message and extract concessions from management.

When their store was slated for closure, aggrieved workers at a Walmart in the Hunan city of Changde blockaded the store and demanded negotiations over severance pay for employees fearing sudden layoffs. Led by a maverick local leader of the usually conciliatory state-run union, workers recently rebuffed the retail giant’s settlement offer, demanding extra payment to compensate for “breach of contract.”

Labor unrest is also emerging among the migrant workforce—a more diffuse wave of activism driven by some of the most exploited workers, often in precarious industries, who are typically isolated from both their rural home communities and from the urban societies where they work. Guangdong, a hub of foreign investment and migrant labor, has percolated with labor militancy at multinational firms. In April, for example, an historic strike involving some 40,000 workers exploded at a Taiwanese-owned Yue Yuen shoe factory, shaking up the supply chains of Adidas and Nike.

But the state is also adapting to these new currents of strife. Just as the regime’s neoliberal reforms effectively bought the silence of the intelligentsia with consumptive prosperity, it now seeks to contain (and ultimately neutralize) workers’ unrest through formal civil legal channels. For material disputes over, for example, wage arrears, the state encourages workers and advocates to take to the courts rather than the streets.

The logic of the gradualist, legalistic approach to labor empowerment is appealing. Han Dongfang, a worker who protested at Tiananmen and now heads China Labour Bulletin, argued in New Left Review in 2005:

Will you put your trust in gathering tens of thousands of people onto the streets, or in seeking legal help from a lawyer? Most Chinese people believe in the former rather than the latter.… This is what we are trying to do—to solve existing social problems through existing legal systems. In a sense, you could call it a cultural project: encouraging people to trust in peaceful negotiations. That kind of confidence is needed for a healthier development of the country in the future.

However, China scholars Eli Friedman and Ching Kwan Lee have observed that unrest has actually increased during periods of legal reform. Despite more formal rights, workers remain constrained by anemic enforcement, unresponsive leadership from the management-friendly official union and, generally, labor violations on such an epidemic scale that the fundamental problems can’t be resolved on an individual basis:

The rise of rights consciousness is outgrowing institutional capacity to meet or contain workers’ demands. Workers have more rights on paper—and are more aware of them—than ever before. But in reality they have little leverage in their places of employment, and the protection that their interests receive from the courts and the government is uneven at best. Not surprisingly, worker protests do not look as if they will disappear from Chinese life anytime soon.

But they may yet spread in another direction: as consciousness of labor rights solidifies, higher-ranked workers and even managers have sometimes taken the lead in workplace uprisings, with labor demands that galvanize unrest in the lower ranks. The moments of convergence between upper- and lower-tier employees faintly echoes the brief cross-sector solidarity that protesters displayed at Tiananmen.

If a conception of legal justice can form the basis for a new class consciousess, it could seed the germ of a collective social movement. But only if workers believe that existing institutions are doing more to derail change than to shepherd it. Under the current political climate—fueled by repression, nationalist fervor and economic boom times—activists face daunting obstacles to building a mass consciousness amid a systematically depoliticized, individualistic social landscape.

Still, the social order is hardly seamless. Protests regularly erupt—in factories, in communities enraged by local pollution, or among farmers resisting land grabs. But such localized unrest hasn’t been fully harnessed into a wider political consciousness.

Or will the next political spark emerge from a more organic sense of social justice? The massive Yue Yuen uprising, after all, began with a straightforward protest about unpaid social insurance pensions: a recent retiree reportedly complained that her payments fell short of what she was entitled to after years spent working her way up to management; she joined the plant in her twenties in 1989. The strike capped a narrative about twenty-five years in the making. Maybe today, a quarter-century on, Tiananmen’s unredeemed legacy is coming due as well.

Looking back at my childish painting in 1989, the imagination behind the picture seems clearer in retrospect, even if the innocence has long faded.