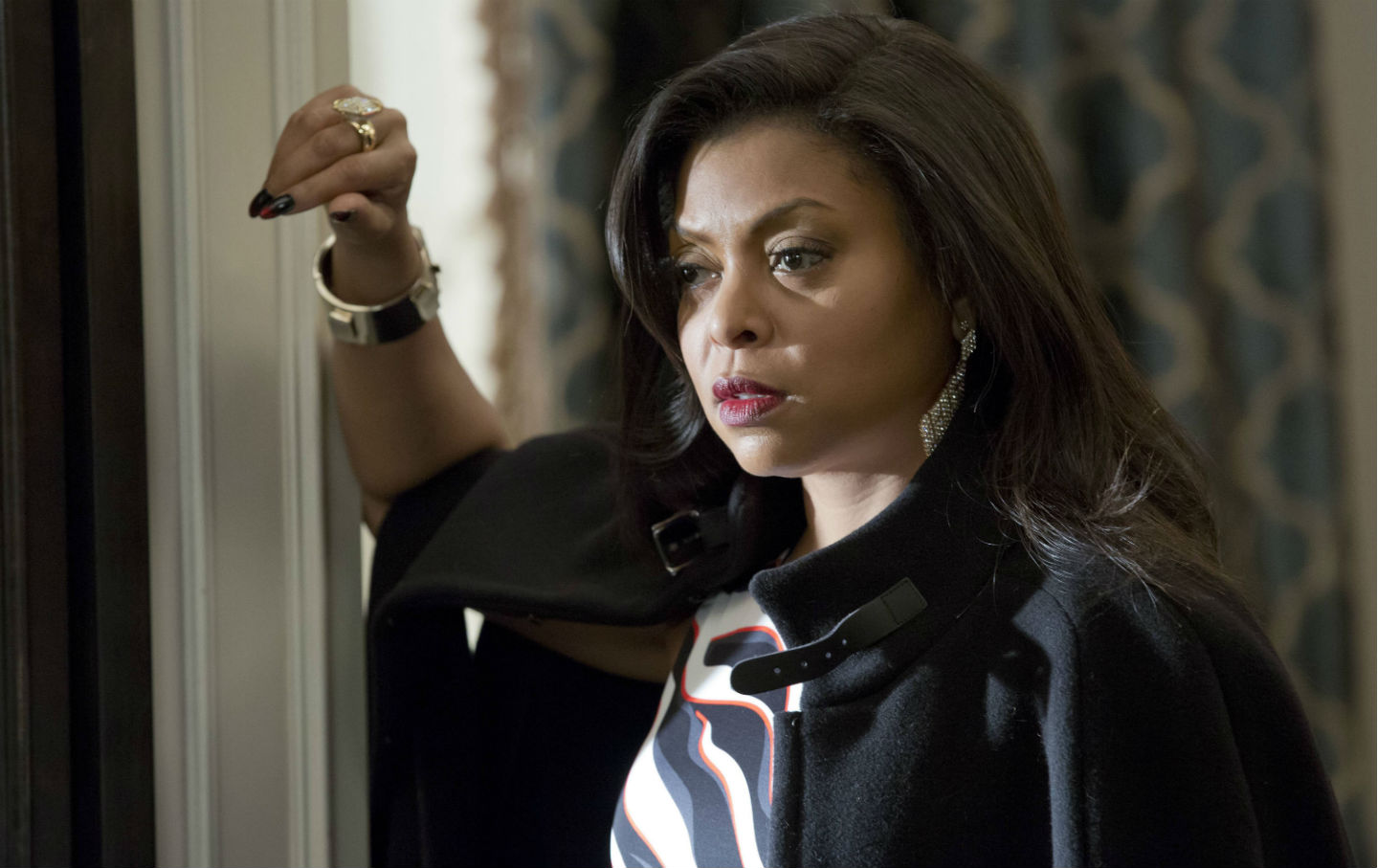 Let’s face it: many people—black, white or other—who met Cookie Lyon (Taraji P. Henson) on the street would steer clear, and fast. She curses friends and associates regularly, clears rooms on demand, and is cunningly ambitious when it comes to Empire, the family-owned record label she and her ex-husband co-founded with drug money.

“It was my $400,000 that started this bitch,” she barks at her ex-husband, Lucious Lyon (Terrence Howard), during the series premiere of Fox’s Empire, this year’s runaway hit for network television. She’s been released from prison unexpectedly after seventeen years, and when her ex protests that he can’t give her half the company, her warning is classic Cookie: “You messin’ with the wrong bitch, Lucious.”

This image of tough, black womanhood (“sassy” is a word commonly heard in writer’s rooms) is one with which we’re already deeply familiar. It’s the predictable hand on hip, lips pursed, finger-in-the-air attitude that we’ve come to expect from mainstream culture. We know this Cookie well, if not personally, then from every TV or film screen around us. She’s 100 percent made in the ’hood (either a point of pride or a drawback, depending). All flash and ghetto verbiage, she struts out of dark-windowed SUVs in tiger-print mini-dresses, minks and stilettos.

Yet viewers, particularly black viewers, are all over this new “black Dynasty,” as the show has been dubbed. They’re showing up for real-time Wednesday night viewing (a major coup for Fox in the era of streaming), tweeting about it on social media, and comparing notes around the water cooler. Since the show has steadily increased viewers for seven consecutive weeks (nearly 15 million Americans are now watching), it’s safe to say that we can expect more history-making numbers for tonight’s season finale.

So why the fuss? What’s so special about the Lyon family—and about Cookie Lyon in particular? Why have so many black viewers, who make up 64 percent of Empire’s audience, tuned in week after week, surprising even industry veterans with chart-breaking ratings growth unlike any seen in more than twenty years of network television? Fox targeted black women in an effort to attract and cash in on the Real Housewives audience. Their strategy was a success apparently. According to Nielsen ratings, Cookie’s biggest fans are in chocolate cities like Atlanta, New Orleans, Detroit, Baltimore, Philadelphia and St. Louis.

The way I see it, we come back to Empire week after week because Cookie Lyon is refreshingly (finally) so much more than the façade; so much more than the surface, stereotypical “angry black woman” that America thinks she already knows. If Henson played Cookie as just the stereotype, viewers would have tuned out long ago. Even those of us who avoid predictable narratives about thuggish rappers, gangstas and drug dealers can’t help but be captivated by the Lyons, and by Cookie in particular. Because for all our advances (thank you, Shonda Rhimes), Cookie is still, surprisingly a rare character for a black woman in primetime: a multidimensional, full-blown human being.

If the aim here were to tally up Cookie’s flaws, the list would run long. She’s not above violence, as some critics have noted, pointing to a scene where she beats her estranged, now-grown son Hakeem with a broomstick. (For the record, he’s an entitled young rapper who lightly curses her to her face.) And she’s anything but PC… thank goodness.

“You didn’t tell me you was dating a little Mexican,” she quips cheerfully to another son, Jamal (“a gay,” as she calls him). And how about, “Pay the Pakistani,” a now Twitter-famous line she spits at her ex, nodding to a waiting cab driver.

It’s telling that Taraji P. Henson was voted Entertainer of the Year at the NAACP Image Awards this past February, an honor announced by no less a towering figure than Oprah Winfrey. Unlike every other Image Award given by the venerable civil rights organization, Entertainer of the Year doesn’t rely on a committee of “industry professionals and leaders.” Instead, it’s given to the performer with the most popular votes in an online poll. In her first major film roll in 2001, Henson played one of two baby mamas to director John Singleton’s Baby Boy protagonist. A few years later, she gave a standout performance as a prostitute/baby mama to Terrence Howard’s pimp in Hustle & Flow, and even provided vocals for the film’s Academy Award–winning Best Original Song, “It’s Hard Out Here for a Pimp.” Perhaps because of this record, the actress took an understandably defensive stance during her acceptance speech, paraphrasing Tupac Shakur in her answer to critics who’ve chastised her choice of “stereotypical” roles.

But what does it say about us that this particular show, set as it is in an underground world of criminality and hustle, may be the first black family drama to succeed in primetime? Empire’s success comes just as the Moynihan Report, fifty years old this year, is again a topic of political conversation, and the supposed dysfunction of the black family continues to be debated on news talk shows. Given this political and cultural context, the safer route for producers Lee Daniels (Monster’s Ball, Precious and The Butler) and Danny Strong (The Butler, Hunger Games: Mockingjay) would have been to make Cookie a unidimensional “positive” character; a more fitting example for NAACP Image Award judges, perhaps.

That would have been a mistake.

There are two moments in this first season that stand out to me as evidence of Cookie’s complexity. In a series of flashbacks, we see Jamal as a young boy, clunking into a living room full of guests wearing his mother’s high heels and a bright scarf wrapped à la Jackie Kennedy around his head. Lucious, his homophobe father, snatches the boy up, storms outside, and dumps his small body into a metal garbage can. In a flash, Cookie is behind him, throwing punches and kicking her husband while simultaneously scooping Jamal back to safety. (We heart that Lucious doesn’t dare lay a hand on his wife. Unrealistic, yes, but Empire is nothing if not aspirational.)

In another flashback scene, Cookie explains to Jamal tearfully from behind a glass prison wall that kids are bullying him because he’s “different” and that his life is not going to be easy because of it. But you listen to me, she adds. “I got you. You hear me? Come here.” She stands, hands pressed against the window.“I got you.”

When have we ever had a chance to see this black woman in primetime television: this vulnerable, fiercely loyal, protective mother?

And Cookie is unpredictably naked and exposed in love, too. For all her tough talk and hard living, Lucious is still the only man she’s ever slept with, and even though he’s moved on and is engaged to someone else, she’s still, clearly, in love with him.

Equally powerful are Cookie’s sisterly scenes with Elle Dallas (Courtney Love). Elle is one of Empire’s washed-up, old-school artists who hasn’t had a hit in years, and thanks to a drug habit has been blackballed as “difficult.” But Cookie remembers how Elle’s music gave her a reason to live all those years she was in prison. Elle saved her, and now Cookie plans to return the favor. I’m sure many black women who’ve had to bite their tongues while being unfairly labeled can relate to Cookie’s boardroom speech. “Difficult,” she spits to executives at a conference table. “I know that word. Ya’ll like to toss us to the side when you can’t control us anymore. Because you’re lazy and you don’t want to do your job.”

Cookie knows how to do her job. Pushing her way into Elle’s dingy hotel room, she kicks a half-naked junkie out of the singer’s bed and flushes Elle’s stash down the toilet before taking the sobbing artist into her arms. What Elle needs, she tells her later, back in the recording studio, is to stop pretending; to take off the “fake ass eyelashes” and the blond weave and the furs, and to sing about her pain. “I’m fighting for a comeback too, Elle. It is do or die for me, too.” To say Cookie is tough is to put it mildly, but it’s her raw vulnerability that astonishes and captivates us most.

And maybe that’s really the show’s secret to success. That Cookie provides a kind of mirrored window into the distinct worlds that we all inhabit to varying degrees. Or maybe it’s something more basic than that, more universal; maybe it’s the mere fact that Cookie, loyal to the death, knows how to take a hit for her family… and come back swinging.