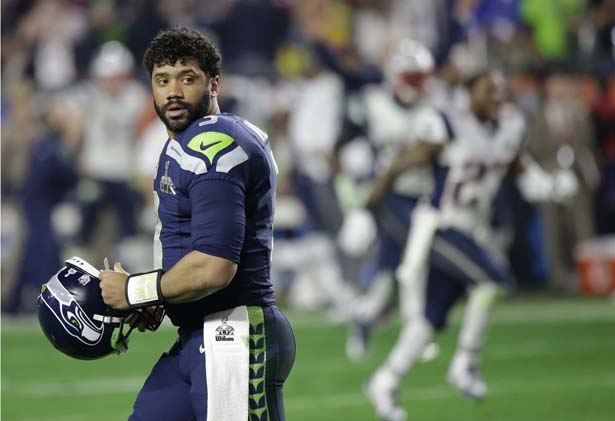 Conspiracy theories abound in US history, a way to explain the unexplainable in a nation with massive gaps in wealth and power. How could a lone gunman kill the President of the United States? Who put a drifter like James Earl Ray in position to kill Dr. Martin Luther King? Or the conspiracy theory of our century, one that has been entertained by the person at the heart of this article, Seattle Seahawks Pete Carroll, how did the Towers fall? (Please save the e-mails. I am not passing judgment on any of the above theories. Only pointing out that they all have found purchase.)

Sports, where antitrust exemptions, a compliant media and authoritarian structures don’t exactly encourage open discussion, conspiracy theories have always been nourished. Well, one is certainly emerging after last night’s shocking end to Super Bowl 49, as the Seahawks gave away a game that looked comfortably in their grasp. With the outcome in their hands in the closing seconds, on second down from the one yard line and trailing by four points against the New England Patriots, Seattle coach Pete Carroll chose to throw a three-foot slant over the middle instead of handing it to their power runner extraordinaire Marshawn Lynch. It was, of course, intercepted, the first time a pass from the one-yard line had been intercepted all season in any game.

In the stunning aftermath, after that unfathomable decision, conspiracy theories sprouted like Audrey II in Little Shop of Horrors. I’m not talking about Twitter-theories from deep-thinking eggs, or any cris de coeur from devastated Seahawks fans. I’m talking about people inside Seattle’s own locker room. I’m talking about texts I received from mainstream writers who don’t want to deal with the backlash that would come with writing it up.

The theory goes something like this. Russell Wilson is your young clean-cut God-fearing media-perfect quarterback. If one was creating a superstar face to market for the twenty-first century, chances are they would look, sound and basically be Russell Wilson. He’s Derek Jeter with a Bible, someone who comes across like he has never spoken out of turn in his entire life.* Marshawn Lynch is… Marshawn Lynch, and if you haven’t figured out what that means after the past two weeks, then you haven’t been paying attention.

The theory goes that there were major financial, public relations and football reasons for Russell Wilson and not Lynch to be the one who ends the game in glory. If he throws that touchdown for the victory, Wilson is almost certainly the Super Bowl MVP. He gets the commercial. He gets to stand with the commissioner. And oh, by the way, he also gets his new contract, one that will fasten his prime, at only 26 years old, to the Seattle franchise. Marshawn Lynch is also due a new contract. Marshawn Lynch, had he punched that ball over the goal line, would probably get to be the one handed the MVP trophy. Marshawn Lynch also maybe gets on the mic to say Lord knows what.

Marshawn Lynch is in addition playing for a new contract and will certainly get one after an awesome, iconic season. But unlike Wilson, Marshawn Lynch turns 29 this off-season, that time when the ability of running backs tends to fall off the cliff. In Seattle’s own recent history, they saw their MVP running back Shaun Alexander go seemingly overnight from superstar to someone who could barely run the ball, a football equivalent of milk left on the radiator.

The conspiracy theory lies in the fact that Seahawks coach Pete Carroll believed that the last yard the Seahawks needed for that Super Bowl victory was a gimme and, all things being equal, much better to have the iconic Super Bowl moment go to Russell Wilson than to Marshawn Lynch. Coaches setting certain favored players up for glory is as old as football itself. In addition, the politics of race, respectability, public relations and what’s in the best interest of a $2 billion corporation all played into this. That’s the theory.

I contacted someone inside that locker room and they said to me as if on repeat: “Can’t believe it. We all saw it. They wanted it to be Russ. They didn’t want Marshawn to be the hero.”

Mike Silver for the NFL network reported on these “mutterings” as well, writing that he wanted to “refrain from lending any legitimacy to the conspiracy theory which one anonymous player was willing to broach: That Carroll somehow had a vested interest in making Wilson, rather than Lynch, the hero, and thus insisted on putting the ball in the quarterback’s hands with an entire season on the line. ‘That’s what it looked like,’ the unnamed player said, but I’d be willing to bet that he merely muttered it out of frustration, and that it was a fleeting thought.”

Appreciate Mike for reporting it, but it’s not a fleeting thought. People in the Seattle locker room are saying it. People in the sports media are texting it to me. Only a few people are writing about it. But the fact that people on the inside are even thinking it, in a locker room that earlier this season, as Mike Freeman reported, was roiled by these very kinds of divisions, makes it story enough.

But does it hold actual weight? Would Pete Carroll risk the Super Bowl for public relations? Who the hell knows? Some mitigating factors in Carroll’s corner: Marshawn Lynch is a beast mode of awesomeness, but was actually one for five on the season when rushing from the one-yard line. In other words, it was not an automatic for Lynch to score that touchdown. If he fails, the Hawks have to burn that last time out and probably then have to pass it anyway. Factor in that Pete Carroll may have been thinking about a somewhat similar scenario when, coaching at USC in 2006 for a national championship, he ran the ball and failed. Given that Carroll himself was basically in a state of post-traumatic stress after the game and didn’t really explain much of anything, it may be a long time before we ever know what he was thinking. But in a locker room like Seattle’s where they truly do feel like it’s them against a world and an NFL power structure that wants to put them down, this is one theory that we can expect to find purchase in the months ahead. Tragically, it all overshadows a terrific comeback by the New England Patriots and a game for the ages, a game that reminds us why, despite every scandal, every NFL corporate crime and all the incompetence that swirls around Roger Goodell’s leadership, the sport still reigns supreme.

* the original text quoted and hyperlinked the movie The Other Guys where Derek Jeter is tearfully called a “biracial angel” as a reference to the way some sports fans adore Wilson. Yes. I know – and knew – that Wilson is of African and Native American descent and not “biracial” (if we accept the definition of “biracial” as including whitenss). I thought the context of The Other Guys scene made the reference work. Hyperlinks don’t work as context in writing however so I made the change. I was wrong and I apologize. – dz