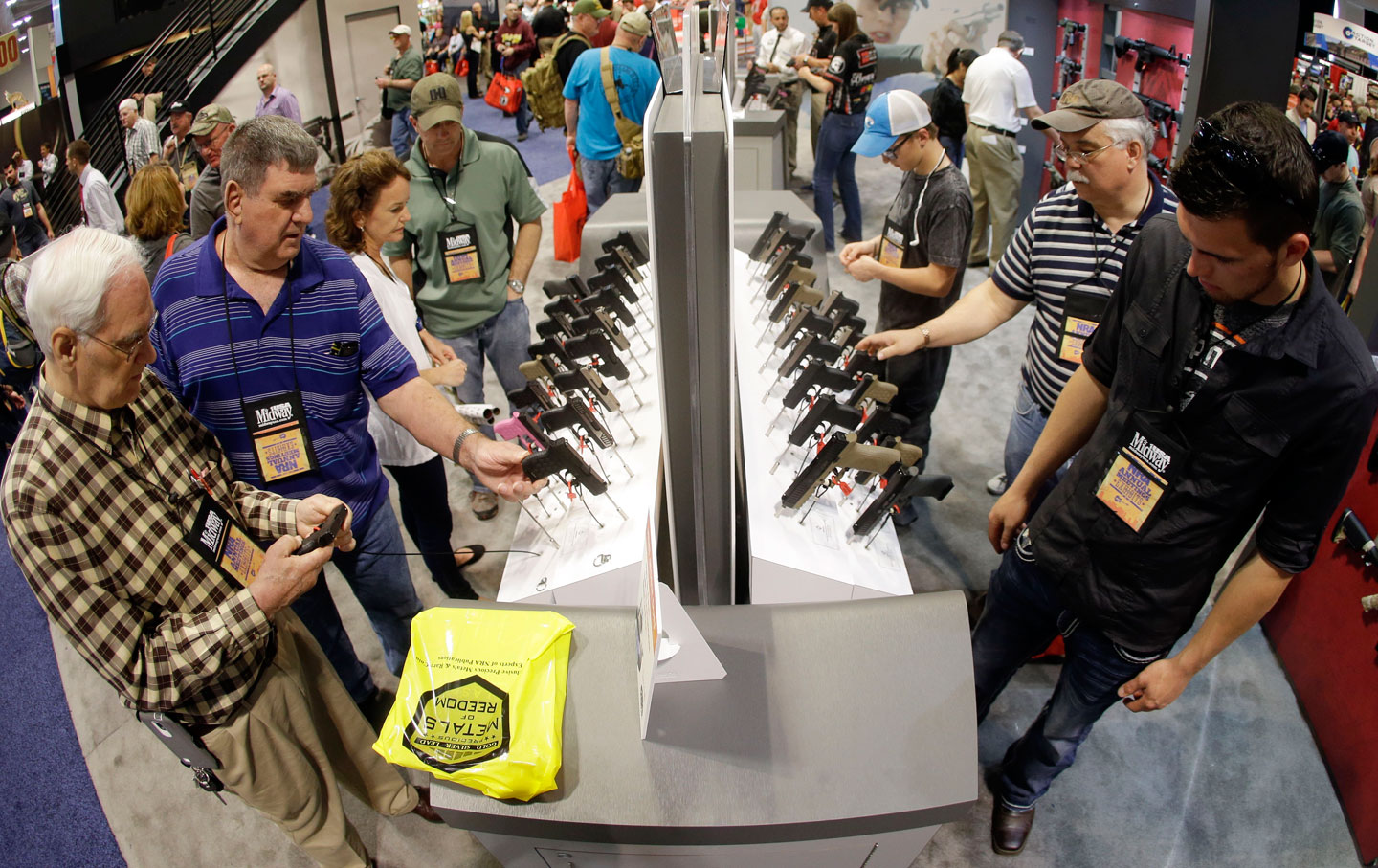 EDITOR’S NOTE: The original story identified a source as a combat veteran and former Navy SEAL. A records search has since revealed that he significantly exaggerated his military record. His comments have been removed from the article, and the headline has been changed. We apologize to our readers.

Wayne LaPierre, the head of the National Rifle Association (NRA), has famously claimed that “the only way to stop a bad guy with a gun is with a good guy with a gun.”

Much of today’s opposition to stronger gun safety regulations rests on the gun lobby’s Hobbesian vision of self-sufficient, heavily-armed citizens standing up to vicious thugs. This Die Hard argument is constantly parroted by politicians and conservative pundits. But the statistical reality is that for every justifiable homicide in the United States—for every lethal shooting in defense of life or property—guns are used to commit 34 murders and 78 suicides, and are the cause of two accidental deaths, according to an analysis of FBI data by The Washington Post.

LaPierre, a career lobbyist, has no clue what it’s like to use a firearm in anger. But The Nation spoke to several people who do—including combat veterans and former law enforcement officers—and who believe that the NRA’s heroic gunslinger mythology is a dangerous fantasy that bears little resemblance to reality. Retired Army Sergeant Rafael Noboa y Rivera, who led a combat team in Iraq, says that most soldiers only function effectively after they’ve been exposed to fire a number a times. “I think there’s this fantasy world of gunplay in the movies, but it doesn’t really happen that way,” he says. “When I heard gunfire [in Iraq], I didn’t immediately pick up my rifle and react. I first tried to ascertain where the shooting was coming from, where I was in relation to the gunfire and how far away it was. I think most untrained people are either going to freeze up, or just whip out their gun and start firing in that circumstance,” Noboa said. “I think they would absolutely panic.”

Those interviewed for this article agreed that the key distinction isn’t between “good guys” and “bad guys,” because intentions are less important than the rigorous—and continuous—training that it takes to effectively handle firearms in high-stress situations.

Dr. Pete Blair, an associate professor of criminal justice at Texas State University and director of the Advanced Law Enforcement Rapid Response Training Center (ALERRT), has studied mass shooting incidents and trains law enforcement personnel to respond to active-shooter situations. The cops who go through his course conduct live-fire exercises using real firearms which are re-chambered to fire “soap rounds” that leave only welts when they hit.

For every justifiable homicide in the US, guns are used to commit 34 murders and 78 suicides.

Blair’s trainees run through a number of real-world scenarios—“force on force training” that’s designed to “inoculate” officers against the problems people naturally encounter in high-stress situations. That stress response, says Blair, includes “tunnel vision, audio exclusion and time dilation,” and one would expect people who weren’t trained in these situations to “freeze up or not know what to do, and to have difficulty performing actions correctly.”

Weekend-long tactical training courses for civilians are growing in popularity. But these courses offer only a shadow of what’s required, says David Chipman, a former agent with the Bureau of Alcohol, Tobacco, Firearms and Explosives (ATF). Chipman, who spent several years on the agency’s SWAT team, says, “Training for a potentially deadly encounter meant, at a minimum, qualifying four times a year throughout my 25-year career. And this wasn’t just shooting paper—it meant doing extensive tactical exercises. And when I was on the SWAT team we had to undergo monthly tactical training.”

Tactical officers typically receive training in “judgmental shooting,” which includes knowing when it’s prudent to hold their fire, and “blue-on-blue awareness,” which drills into them the importance of considering whether other cops are present, including officers who aren’t in uniform. They’re trained to overcome tunnel vision by looking not only at their target but also maintaining an awareness of who or what is behind it.

“The notion that you have a seal of approval just because you’re not a criminal—that you walk into a gun store and you’re ready for game-day—is ridiculous,” says Chipman.

A case in Texas two weeks ago highlights the risks of civilians intervening in chaotic situations. Police say that as two carjackers struggled with the owner of a car at a gas station in northeast Houston, a witness decided to take action into his own hands. He fired several shots, but missed the perpetrators and shot the owner of the car in the head. He then picked up his shell casings and fled the scene. Police are still looking for the shooter.

The potential for that kind of outcome is why most police agencies strongly recommend that concealed carry holders only use their weapons as an absolute last resort, and not intervene in robberies or other crimes in which they’re not directly involved. David Chipman notes that even police officers are told that if they encounter a crime in progress while off-duty, “maybe the best thing to do at that time is not to take lethal action but instead try to be the best witness you can be.”

Not pulling a weapon is often the wisest course of action in active-shooter situations. While a number of conservatives declared that Oregon’s Umpqua Community College, the scene of a mass shooting last week, was a gun-free zone, the truth is that several concealed carry holders were present, and they wisely decided to leave their guns holstered. Veteran John Parker later explained to MSNBC, “We could have opened ourselves up to be potential targets ourselves, and not knowing where SWAT was… if we had our guns ready to shoot, they could think that we were bad guys.”

“I think there’s this fantasy world of gunplay in the movies, but it doesn’t really happen that way.” —Retired Army Sargeant Rafael Noboa y Rivera

David Chipman says the Secret Service’s history is instructive. “Here’s an agency that has all the weaponry that they could ever need, all the training that they could ever need, and they’ve never fired a weapon in defense of a president during an assassination attempt. You’re trained to throw your body in front of the protectee, not to open fire. Just look at the picture taken immediately after Reagan was shot and count the guns in that photograph. They’re all being held by highly-trained experts and not one of them fired. They didn’t shoot [would-be assassin John] Hinckley. And that’s because you’re likely to do more harm than good in that situation.”

The gun lobby and some conservative politicians have seized on a “study” by Davi Barker, a conservative blogger, which purports to show that when a “good guy with a gun” is present during a mass shooting, an average of 2.5 people die, but in similar situations where nobody is armed, there are an average of 18 deaths.

It’s provided the basis for claims that gun-free zones are, in former Arkansas Governor Mike Huckabee’s words, “sitting duck zones.” But Barker later admitted that his methodology entailed analyzing “10 shootings I found listed on some timeline somewhere.… I honestly don’t even remember where.” And Pete Blair from Texas State notes that by definition, shootings with fewer than four casualties aren’t “mass shootings,” and incidents with as many as 18 casualties are exceedingly rare. Blair acknowledges the possibility that shooters may be more likely to seek out places they see as soft targets, like gun-free zones, but adds, “Trying to prove that is difficult to do.”

A firearm makes a person almost twice as likely to become the victim of a homicide and three times more likely to commit suicide.

Blair co-authored a study for the FBI that looked at 185 mass shooting events over a 13-year period. It found that while around one-in-five were stopped by civilians before police arrived, in only one case was it done by a typical “good guy with a gun” (professionals—an off-duty cop and an armed security guard—used their guns to stop two others). In most cases Blair and his colleague studied, civilians ended a rampage by tackling the assailant.

None of this has prevented the gun manufacturers’ lobby from insisting that more guns make a society safer. And many Americans have come to believe it. According to the Pew Research Center, the share of gun owners who cite “protection” as “the main reason they own a gun” almost doubled between 1999 and 2013, from 26 percent to 48 percent.

But a large body of empirical evidence finds the opposite to be true. Last year, epidemiologists at the University of California, San Francisco, conducted an extensive analysis of data from 16 previous peer-reviewed studies, and found that having access to a firearm makes a person almost twice as likely to become the victim of a homicide and three times more likely to commit suicide. Previous research has shown that countries with higher rates of gun ownership also have higher rates of gun deaths and states with more guns have higher homicide rates. (The gun lobby’s side of the scholarly debate rests largely on the discredited and allegedly fraudulent work of economist John Lott.)

“Despite what we see on TV, the presence of a firearm is a greater risk, especially in the hands of an untrained person,” says David Chipman, the former ATF agent. “Someone can always say, ‘If your mother is being raped by 5 people, wouldn’t you want her to have a gun?’ Well, OK, if you put it that way, I’d say yes, but that’s not a likely scenario. The question is: If you see someone running out of a gas station with a gun in their hand, do you want an untrained person jumping out and opening fire. For me, the answer is clearly ‘no.’”

Editor’s Note: An earlier version of this piece incorrectly stated that last week’s shootings in Oregon ended when the shooter was tackled.