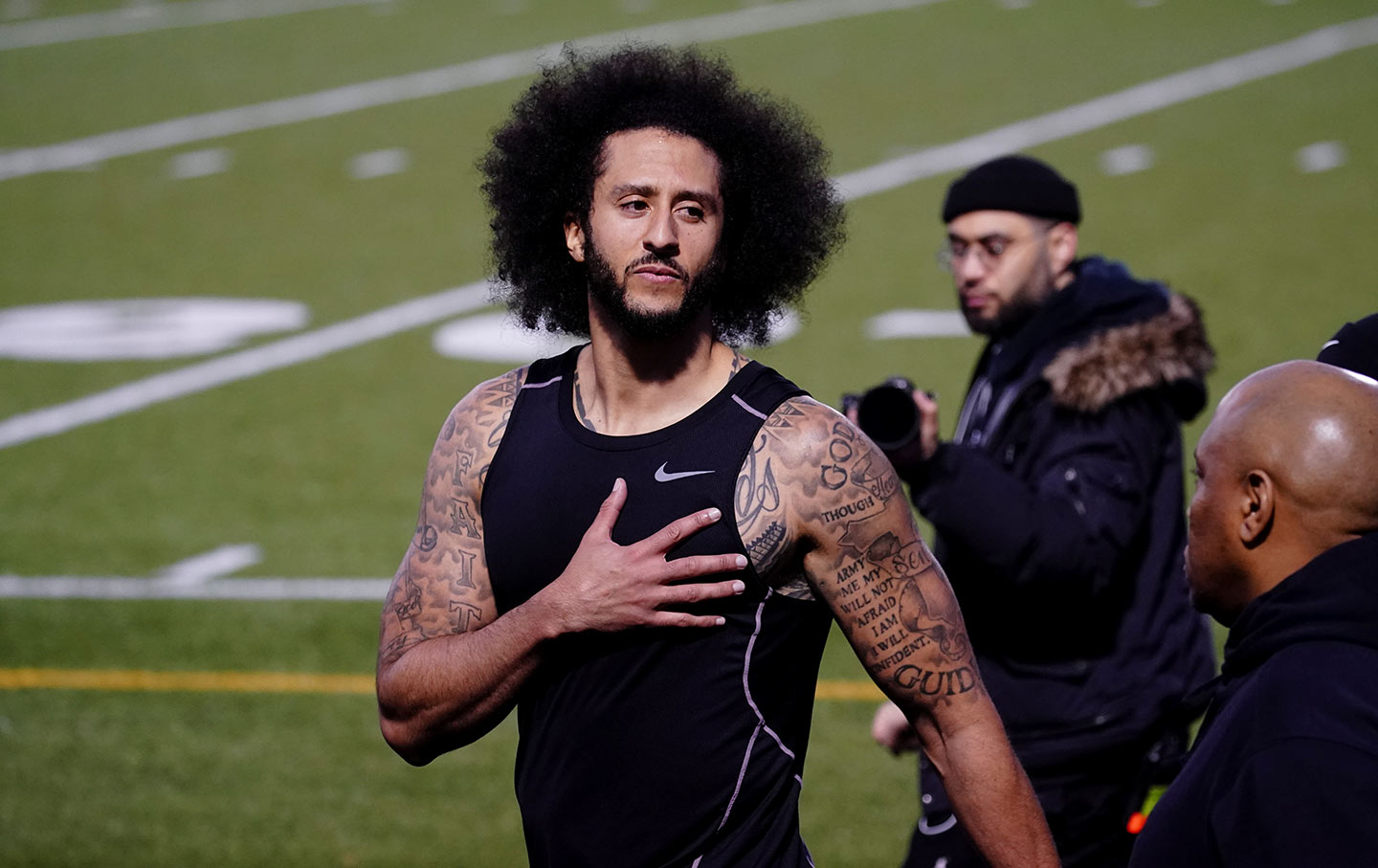 Colin Kaepernick at a special training event that he created to provide greater access to scouts, the media, and the public, at a high school in Riverdale, Georgia, on November 16. (Reuters / Elijah Nouvelage)

It is crystal clear after last Saturday in Atlanta that the reason Colin Kaepernick does not play in the NFL has nothing to do with ability.

In a workout session that started as a hastily assembled circus of the NFL’s making, Kaepernick threw a series of high-velocity darts and 50-plus yard bombs with the flick of his wrist. At age 32 and visibly in the best shape of his life, he clearly has the ability and desire to compete. What he doesn’t want is to play as a broken person for a league determined to break him. Roger Goodell and the NFL tried to bend Kaepernick to their will this week. They scheduled him for a tryout with only four days’ notice. They insisted he come to Atlanta and work with a coach not of his choosing at the Falcons’ headquarters. They told him that it would be on a Saturday, when coaches and top scouts are busy either preparing for Sunday games or analyzing college contests. They did not tell him who the receivers he would work with would be. They wanted him to sign a “non-standard injury waiver” that would have prevented Kaepernick from suing the league for collusion in the future. Most egregiously, they insisted that the workout not be open to the press. Roger Goodell wanted all the positive public relations for “ending the collusion” against Kaepernick and none of the transparency.

Kaepernick then committed a grave sin in the eyes of not only the NFL but also a pathetic coterie of members of the sports media who also work for broadcast partners with the league. He showed up in Atlanta and refused to work out at the Falcons facility under the watchful eye of an NFL chosen coach. He instead went to a high school an hour away with his own receivers. He kept it open to the press, several of whom live-streamed the workout over social media, preventing the NFL from spinning the event as if he no longer had the goods. Kaepernick wore a shirt that said “Kunta Kinte,” a reference to LeVar Burton’s African name in the miniseries Roots, a name Burton’s character clung to even as he was whipped to accept that his new name would be Toby.

Of the reported 24 team reps that showed up at the Falcons headquarters only a handful had the courage to get in their cars and follow Kaepernick and the assembled media to his tryout. Then Kaepernick, as expected, balled out and said to everyone, “I’ve been ready for three years. I’ve been denied for three years. We all know why. I came out there and showed it today in front of everybody.” Kaepernick then thanked scouts who were there from Washington, New York (the Jets), and Kansas City, and said, “When you go back, tell your owners to stop being scared.”

Immediately afterward, the NFL’s media prizefighters put the day’s tomfoolery on Kaepernick’s shoulders, as if he was the one who set this dumpster on fire. This is a gaslighting, Bizarro World analysis, and should be recognized as such. These journalists—who really want you to sign up for Disney Plus—are doing little more than sucking up to the multibillion-dollar teat of a league dependent on a compliant media’s using Kaepernick as a negative object lesson for any other player who might try to flex their personal or political will. Then, as if by clockwork, Jay-Z, who is being paid handsomely to be Roger Goodell’s racial justice whisperer, let it leak that he was “disappointed with Colin’s actions and believes he turned a legitimate workout into a publicity stunt.” But it’s the NFL that staged a publicity stunt. All Kaepernick did was refuse to play their game.

Now that the spectacle in Atlanta is over, we are actually back where we started. Everyone knows that Kaepernick has the ability to play. Everyone knows that he is only being kept out for political and PR reasons. The question will be whether there is one team that is willing to put their team’s success over their political prejudices. This is where we have been for three years, and this is where we remain.