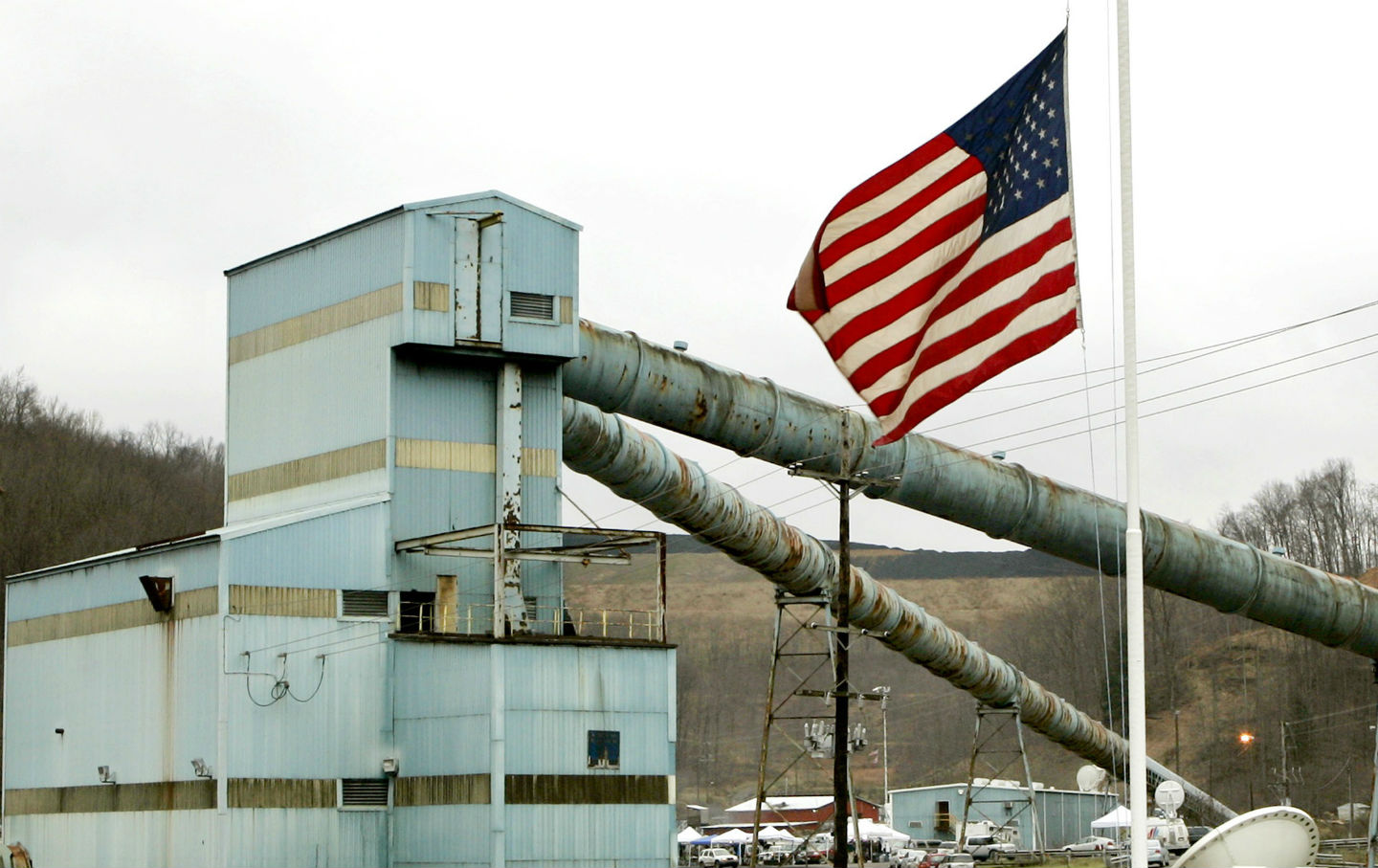 No matter who wins the May 7 general elections in Great Britain, the new prime minister is already committed to a radical shift in the nation’s energy policy. Back in February, the leaders of Britain’s three main political parties—the Conservatives, Labour, and the Liberal-Democrats—jointly pledged that whoever formed the next government would promptly phase out coal in the name of fighting climate change. “We expect coal’s share of the UK electricity market to decline from 40 percent today to 1 to 2 percent by 2025,” says Edward Davey, the UK Secretary of State for Energy and Climate Change.

The rejection of coal by the birthplace of the Industrial Revolution is but the latest sign that coal as an economic enterprise is in a death spiral. “Coal is a dead man walking,” Kevin Parker, the head of global assets management at Deutsche Bank, said back in 2011. Since then, the industry’s outlook has only gotten grimmer.

China and the United States, the world’s leading economic and climate change superpowers, are also restricting coal. The agreement the two countries’ leaders signed last November obliges China to cap its coal use by 2020—and it appears China may already have reached that goal. In the United States, Obama’s EPA has proposed regulations that in effect ban new coal-fired power plants and could force existing plants to close.

These shifts are driven partly by immediate health concerns, but climate change is the clincher. Burning coal kills between 13,000 and 34,000 people a year in the United States and another 670,000 in China, where popular anger at ghastly air quality has clearly rattled the government. Meanwhile, the latest climate science says that more than 80 percent of coal reserves must be left underground to limit temperature rise to the international goal of 2 degrees Celsius. That amounts to a death sentence for coal.

Investors are responding accordingly. The three biggest US coal companies—Peabody Energy, Arch Coal, and Alpha Natural Resources—reported combined losses of $1.5 billion for 2014 and watched their stock prices continue plummeting, the latter two suffering the indignity of becoming penny stocks. Coal executives talk bravely, as their tobacco brethren once did, of exports saving them. Analysts disagree. “If you look at the long-term, it’s not getting any better,” said Aneesh Prabhu of Standard & Poor’s when S&P downgraded coal bonds to junk status. “It’s a secular decline.”

Coal is becoming the tobacco of our time, and its time is passing. Like smoking cigarettes, burning coal is deadly for individuals and society alike. This is now sufficiently recognized by governments and mass opinion such that, as with smoking in the 1990s, public policy is turning against coal and is unlikely to turn back.

“Big coal, oil, and natural gas, and related industries like the Koch Brothers’ companies, profit by offloading the costs of their carbon pollution onto the rest of us,” said Senator Sheldon Whitehouse, Democrat of Rhode Island, in his 98th “Time to Wake Up” speech on climate change to his colleagues. “They traffic in products that put health and safety at risk, and they don’t tell the truth about their product. Sound familiar? It should, because the fossil fuel industry is using a familiar playbook, one perfected by the tobacco industry.

The big question, not just for the coal business but everyone, is how coal’s decline will be managed. How do you phase out coal, which still supplies most of the world’s electricity, while keeping the lights on? How do you transition tens of thousands of miners and power-plant workers to new, comparable jobs? How do you sustain local economies and the tax revenues needed to keep schools and police functioning?

Jettisoning coal is thus one of the first great challenges of the Climate Change Era. Somehow humanity must plan and implement a deliberate phase-out of a valuable economic activity that is no longer compatible with civilization’s survival. Can we leave coal behind rapidly enough to preserve a livable planet while at the same time avoiding massive economic and social disruptions?

The British leaders’ pledge was conspicuously silent on how the coal phase-out would be accomplished. But a report released in March by the Institute for Public Policy Research, a think tank respected by all three parties, says the best approach is to tighten carbon emissions standards, much as the Obama administration has proposed in the United States. That should propel a shift from coal to gas-fired power plants. Carbon capture and storage technology (CCS), which prevents carbon emitted by burning coal or gas from reaching the atmosphere, must also be made commercially viable. “We have to crack this [CCS] technology if we’re serious about climate change, not just in Britain but in countries like Poland and China,” says Will Straw of IPPR. That in turn requires, says Davey, reforming the European Union’s troubled carbon trading system to “create a more stable, rising price.”

In the United States, the challenges are larger, though perhaps less daunting. Coal’s share of the electricity supply has already been falling, from 50 percent ten years ago to 35 percent in 2014. Solar power is growing so fast, and is so labor-intensive, that it employs twice as many workers as coal and is adding jobs twenty times faster than the national economy. Reducing demand for electricity by insulating buildings is another fast, labor-intensive way to offset forgone coal power. All of which suggests that keeping the lights on and people employed while phasing out coal should be possible.

The United States has successfully navigated similar transitions in the past, starting with none other than tobacco. When the government decided in 2004 to stop subsidizing the growing of tobacco, it established the Tobacco Transition Payment Program to distribute $9.6 billion over ten years to help farmers switch to other crops.

Washington also managed the closing of military bases at the end of the Cold War. Tom Sanzillo was a senior analyst in the New York City comptroller’s office when construction of the Staten Island Homeport was halted in 1990. Experts arrived from the Defense Department’s Office of Economic Adjustment and “did very thorough assessments—this is where the port does its contracting, this is where the workers live and shop, these are the businesses that will be affected,” he recalls. “They wrote checks to the businesses, the workers got re-deployed in other jobs, and the city of New York got some fiscal payments.”

Sanzillo, who later served as deputy comptroller of New York State, urges the same approach for the impending closure of a coal plant near Buffalo owned by NRG Energy, one of the largest power-generating companies in the United States. The Huntley plant’s approximately 70 workers could work in nearby NRG plants or public hydropower facilities. A tiny portion of the state’s $5 billion budget surplus could keep vital public services operating until local economies bounce back. “Ten million dollars a year to keep the schools open, that’s nothing,” he says. “If you give yourself two or three years to make these transitions, nobody has to get hurt.”

The challenge is greatest in Appalachia, the heart of coal country. “Appalachia deserves federal assistance, because all Americans have benefitted for 100 years from the hard work and environmental and economic sacrifices made here,” says Mary Anne Hitt, director of the Sierra Club’s “Beyond Coal” campaign.

Obama’s 2016 budget proposes spending $1.1 billion to assist communities hurt by the decline of coal, but Kentucky’s powerful congressional caucus is unimpressed.  Mitch McConnell, the Senate majority leader, has called Obama’s proposal “cold comfort” after the president’s “war on coal” had thrown 8,000 miners out of work, but said it should nevertheless be “seriously considered.” Republican Hal Rogers, chair of the House Appropriations Committee, struck a similar tone.

But Rogers, along with Democratic governor Steve Beshear, has launched a bipartisan effort, Saving Our Appalachian Region, that could chart a new course. For example, if Kentucky implemented the same renewable-energy policies enacted across the river in neighboring Ohio, it could create 28,000 jobs by 2022, according to a study released by the Mountain Association for Community Economic Development—three times more than the lost coal jobs cited by McConnell. Asked if they would support such a policy, neither McConnell nor Rogers responded.

Phasing out coal won’t be easy, but it can be done. It requires careful planning, wise spending and unwavering determination. America’s political leaders must make it clear, as Britain’s have done, that coal is being retired, period, and the country is moving in a new, better direction. But that means facing facts that some would rather ignore. “Nobody wants to have this conversation—not politicians, not businesses, not NGOs,” says Sanzillo, “because it means accepting that coal isn’t coming back.”